After a weekend when I was told “Halloween, when demons and ghouls hang out together – because demons are a ghoul’s best friend!” – Real Mallorca, for the fifth game running, dropped points in added-on time, drawing 1-1 against Cadiz on Sunday lunchtime.

In a game we dominated until the 93rd minute, we threw away the chance of all three points due to a lack of discipline in the final moments which also saw the Mallorca coach Luis Garcia Plaza being sent off for shouting at the referee – asking him a perfectly normal question about an unfathomable decision!

Both teams went into this game struggling for points but we totally bossed the first half. In the 20th minute Salva Sevilla’s perfectly-struck free kick smacked the bar and bounced clear. We suddenly sparked into life and in the 29th minute Iddrisu Baba reacted first to calmly side foot the loose ball under Cadiz ’keeper Ledesma to put the islanders ahead, 0-1.

As has happened far too often of late, Mallorca came out for the second half and sat back waiting for Cadiz to react. As the teams came out, Valjent was noticeably missing and was later reported to have ’flu symptoms, which makes him doubtful for Sunday nights 18:30 kick off game in the Son Moix against Elche.

His departure meant the introduction of liability defender Sedlar. Every game the Serbian player plays, he gets a card and Sunday was no exception. After just five minutes his name went into referee Pizarro Gomez’s notebook, and in the 87th minute he fouled again and was sent off.

Mallorca had much less possession in the second half but “Silver Fox” Salva Sevilla continued to spray inch-perfect pin-point passes all over the pitch.

As Mallorca were pushed further and further back up the pitch, LGP rang the changes, bringing on Galarreta and Antonio Sanchez as the coach looked for more dynamism and strength in the engine room.

Then came a bizarre incident involving the referee, he sent off Cadiz’s Iza for a bad tackle on Dani Rodriguez. 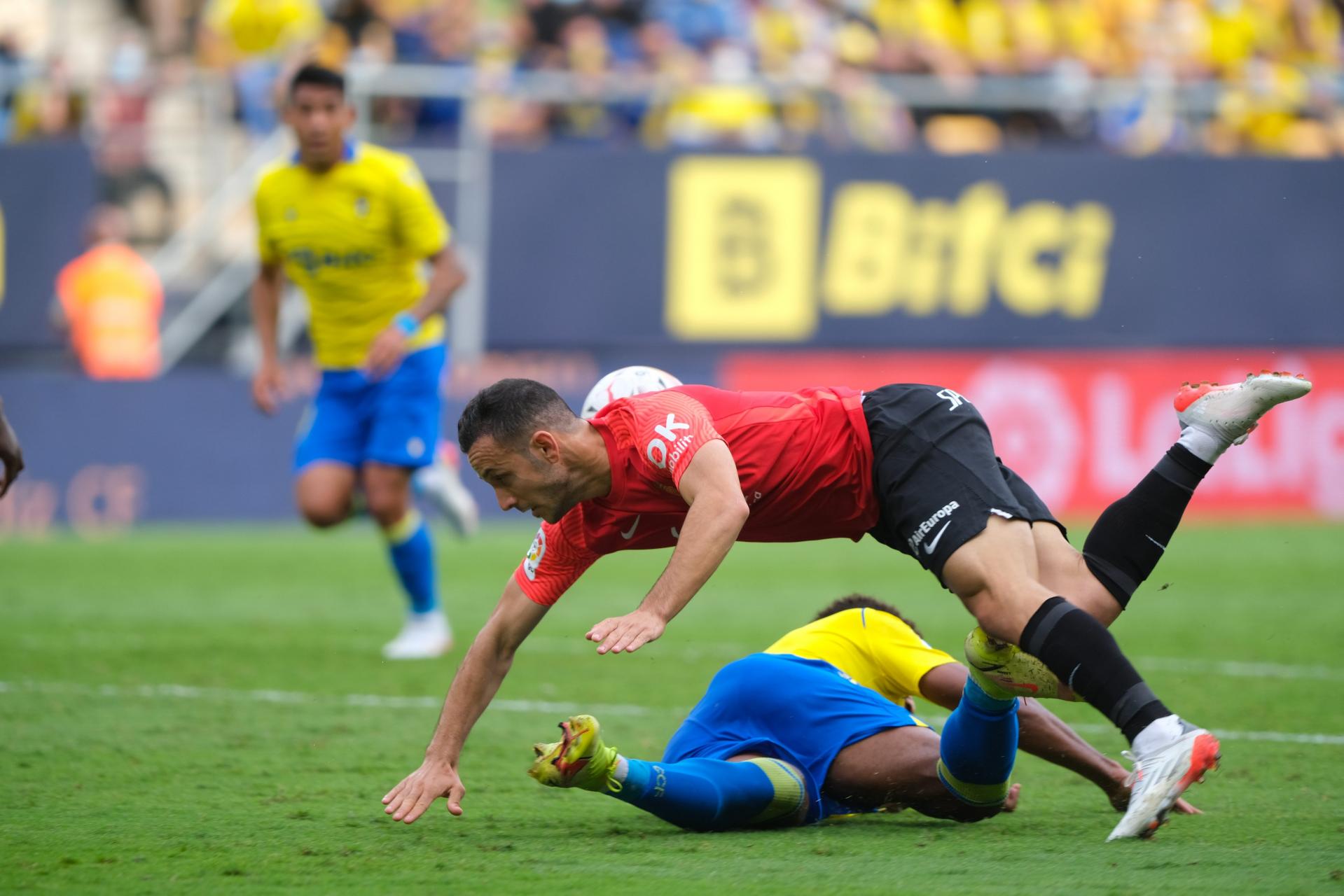 The referee was told to review the coming together by the VAR people in Madrid. The red card was then removed, and Baba was shown a yellow for an innocuous foul that took place a minute previously.

The VAR referee, Mateu Lahoz, Spain’s top referee and the most hated, reminded Sr Pizarro Gomez of the Baba foul and Sr Gomez went back to the pitch-side monitor for another look.

There’s now so much confusion with VAR that it’s difficult to know what the rules are any more.

Our match referee did the right thing by showing Iza red for a serious last-defender foul and VAR’s intervention has caused outrage on social media.

The decision was a potential game-winning changer and we were, to a certain degree, robbed.

By now Mallorca began to lose their discipline.

LGP was sent off for his protests, then right at the death, substitute Joan Sastre clearly pushed over Lozano in the area and veteran striker Negredo sent Reina the wrong way with the resultant penalty, 1-1.

SUMMING UP: You couldn’t make up these late goals we’ve conceded in the dying minutes of matches. That’s now five games in a row in which we’ve capitulated near the end.
Now it’s no longer a case of bad luck, it’s more asking about responsibilities, it’s just not normal to throw points away at the death and coach LGP needs to get a grip on the situation.

The Cadiz penalty was a disaster for Joan Sastre.

Here’s a player who in the third and second divisions of Spanish football was a standout revelation every week.

Now I’m afraid he’s been a “de-sastre” and he’s not good enough for this league.
His foul on Lozano was childish at best.

For the Elche game on Sunday, I’d move the versatile Antonio Sanchez to right back and leave Sastre at his home in Porreres!

Playing Sedlar and Sastre in the same team is a recipe for disaster. From now on we’ll have to reach 90 minutes three goals up otherwise we’ll suffer the consequences. LGP’s decision to being Sastre on backfired big-time and it’s time the coach realises Sastre is not a first division player. We have to learn – quickly – how to see out games and watching players like Lago Junior, Hoppe and Fer Niño sitting the whole game out on the bench made me angry – we need to score more goals.

Elche are the visitors here next Sunday at 18:30 in a MUST WIN game. Incredibly all our injuries (except Take Kubo) have been to defensive players and our opponents have discovered our weakness in the defensive line in the final minutes and this is getting dangerously serious, and we may well see a few more defensive absentees next Sunday.

On leaving the Mallorcafé on Sunday afternoon, two players were on the lips of angry and frustrated fans, Sastre and Sedlar, and perhaps we need a new central defender and right back in January. Two years ago we nearly got into big trouble by not having adequate cover in defence and it cannot be allowed to happen again.

And Finally, A warden in the Rocky mountains was telling a tourist “Brown bears are usually harmless. We suggest you attach small bells to your rucksack and give the bears time to get out of your way.

However, Grizzly bears are extremely dangerous, if you happen to see any Grizzly-bear droppings, leave the area immediately.” Tourist: “How will we know if they’re Grizzly droppings?”