This has been one of our best starts in La Segunda. | Carlos Castro/LOF

During a week when a friend of mine told his new girlfriend that he was a big fan of Beyonce – she said “Whatever floats your boat” to which he answered “No babe, that’s buoyancy!” – Real Malllorca have a demanding four games in 11 days on the horizon (Albacete on Thursday at 19.00 in Son Moix, Alcorcon (A), Malaga (H) and Zaragoza (A). Our coach Luis Garcia Plaza stated on Sunday in the post match press briefing in Mirandes that Thursday’s game would see little change to our 0-0 draw side.

However, the fixture against Alcorcon now on Monday at 18.00 would definitely see him use players who so far this season have had little playing time. LGP said “I think these next two weeks is when we will have to make wider use of the squad we have.”

There will be two changes on Thursday, Martin Valjent who rejoined the team at the Son Bibiloni training ground on Monday after testing negative in the two PCR Covid-19 tests he went through after playing for Slovakia, and Fran Gamez should enjoy his first start of the season after regular right back Joan Sastre saw a double yellow on Sunday.

The only member of the squad who doesn’t look like getting a game is second-choice goalkeeper Miquel Parera, a long-time substitute for Manolo Reina who has only conceded one goal in the six games he’s played in. Reina, along with Antonio Raillo, has been ever present this season and these two stalwarts are the base of our strong defence.

LGP will be able to verify just how good our bench players are against demanding opponents and will find out if these players have the pedigree to face a 42 game fixture list.
He said publicly on Sunday that he was satisfied with the players he has, we’re just about to find out if he is correct.

This has been one of our best starts in La Segunda. In 2013 and 2016 we struggled to get out of the bottom half of the league after six games. The last couple of weeks I’ve been writing about trying to get some fans back into La Liga games and it seems that idea has hit the buffers – for now. The Spanish FA who run the vastly over-subscribed semi-professional Segunda B containing 102 teams divided into five groups are allowing fans back into grounds. Deportivo La Coruña, who Mallorca beat in the play offs a year past May, had 3,000 at their Riazor ground where they beat Salamanca 2-1 with a 97th minute winner!

Their coach is a certain Fernando Vazquez (now 65 years old) who’s managed Mallorca twice in 99/2000 and 2016, and was well known for running up and down the touchline when his team scored a goal. Despite being suspended for Sunday’s game and forced to sit high up in an empty stand, TV pictures clearly showed him running along the back row in jubilation when Depor got their winner.

Vazquez will always be remembered by Mallorca fans of a certain age when we played Ajax in their fantastic Amsterdam Arena in November 1999 in the UEFA cup. We won 0-1 with a wonder strike from Diego Tristan. Mallorca were the first ever Spanish side to beat Ajax in Amsterdam, and we went on to defeat them 2-0 in the Son Moix. In the next round we faced Monaco, beating them 4-2 on aggregate, but we came unstuck in the quarter finals, losing 6-2 on aggregate to Turkish giants Galatasaray.

Unbelievable news broke on Tuesday afternoon when a judge found in favour of the Spanish FA in their court case against La Liga and ruled out football on Monday and Friday nights in both the Spanish first and second divisions. It adds to the chaos of the situation as last week the Spanish national sports council ruled in La Liga’s favour over the Spanish FA to temporarily allow matches on Friday and Monday nights. Now it’s said both bodies see the rulings as being in their favour so another stalemate is imminent.

La Liga chief Javier Tebas supports the idea of playing on a Friday and Monday nights as he believes that a variety of time slots makes the league more attractive to broadcasters and therefore increases streams of revenue for cash-strapped clubs. The Spanish FA were successful last season in making Monday and Friday night football-free, a decision popular with fans who felt the time slot was unsociable for family and work purposes.

The two factions have been deeply divided on a number of issues including scheduling with both sides claiming to hold power in the decision making. One journalist wrote last night “We’re so fed up with the endless rows over Friday and Monday night football that we can barely summon up the energy to bring you this update – both La Liga and the Spanish FA need to grow a pair and sort it out once and for all, it’s so embarrassing for all concerned.”

AND FINALLY, drinking in lockdown 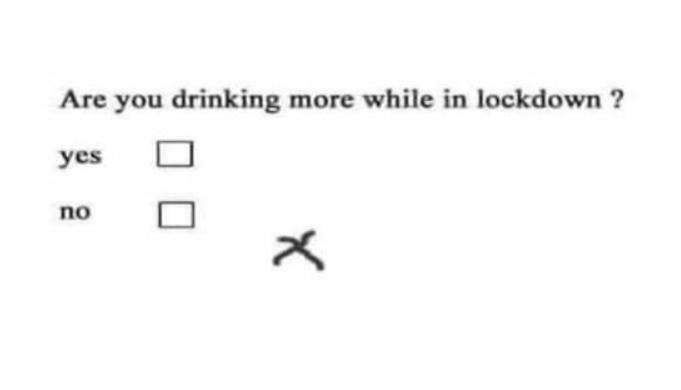