Reina made a couple of good saves early doors

Real Mallorca left the Spanish capital embarrassed on Monday night after losing 4-1 to Fuenlabrada, who hadn’t won at home for SIX MONTHS and were 22 points below the Palma side in La Liga SmartBank.

They’ve now scored seven goals against us in three games. Monday night’s result means we’ve had no wins in three games, taking just one point from the nine up for grabs.

Coach Luis Garcia Plaza was forced, through injury and international call-ups, to make four changes to the team that drew 0-0 in Palma against Real Oviedo 10 days ago.

The first half was a disaster for Real Mallorca and a nightmare for goalkeeper/captain Manolo Reina.

Fuenlabrada were fastest out of the blocks and showed why they are our bogey team having already beaten us in Palma and knocked us out of the Copa del Rey on penalties.

Reina made a couple of good saves early doors as Fuenlabrada attacked at pace but little did we know that the normally reliable shot-stopper (37 years old tomorrow) would, inexplicably, make a couple of joke errors that cost us all three points.

These mistakes confirmed that Real Mallorca are in their worst run of form so far this season. Fuenlabrada looked like the team who were top of the league as they enjoyed probably their easiest 90 minutes of the campaign.

What made this “gubbing” all the more difficult to take was that if we’d won we would have gone three points clear of Espanyol at the top and seven clear of third placed Almeria.

As it turned out Espanyol lead Mallorca at the top (61 points) with the better goal difference, with Almeria four behind us.

In the 13th minute what looked like a routine save by Reina from Cristobal saw the ball slip out of his grasp and “poacher” Pinchi wasted no time in gleefully tapping in the opener.

Mallorca were nearly level when an Abdon Prats header rattled the bar in what was our only goal attempt in the first half. Seven minutes before the interval came another “howler” from Reina.

His bad pass inside the area to Abdon Prats was easily intercepted by the ever-alert Pinchi and “Fuenla” were two up. Just to rub salt into the gaping wounds, the home side made it three in the 41st minute. 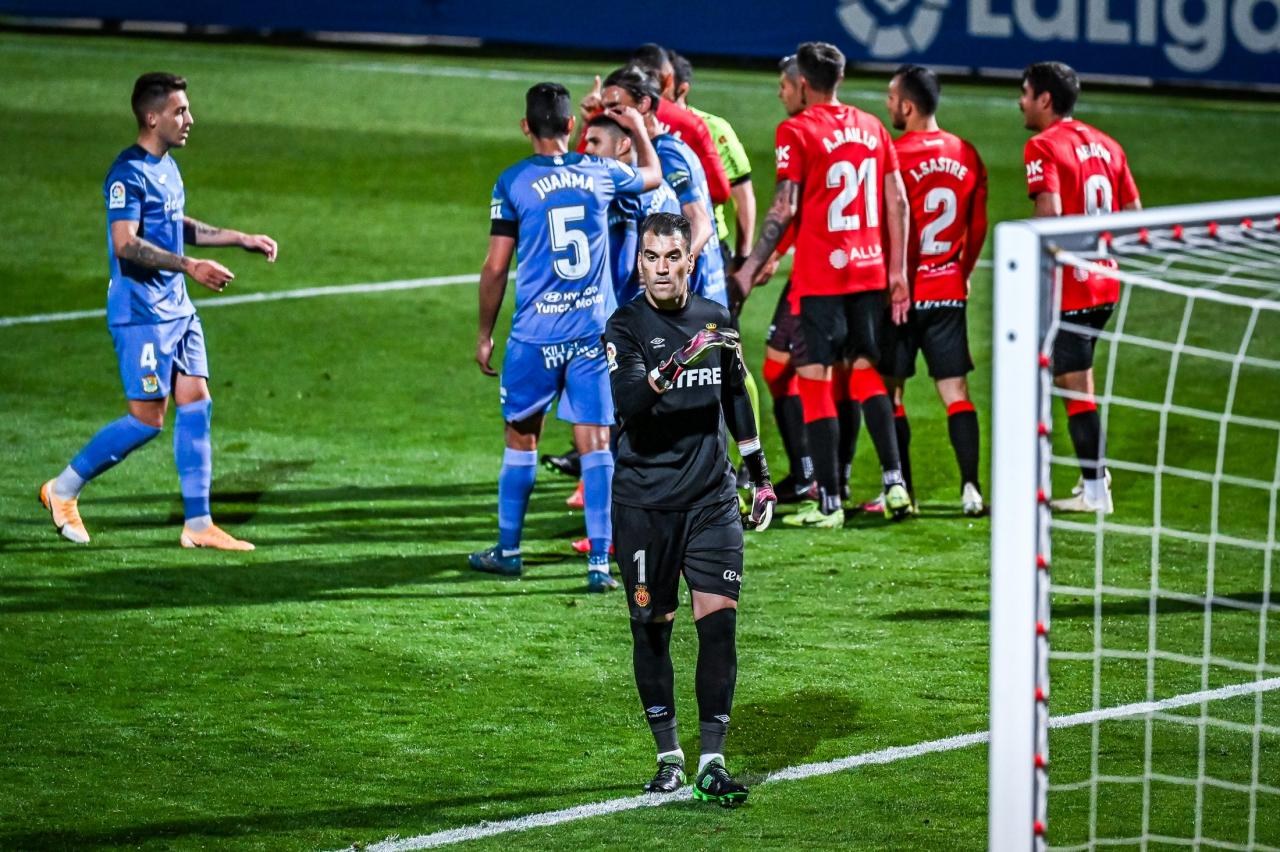 Jordi Mboula back defending tripped Pinchi in the area and Nteka belted in the penalty, 3-0. As half time arrived Mallorca were shell-shocked.

After the break there looked to be a better attitude from the Palma side and they pulled one back in the 56th minute when Mboula scored his first goal of the season, after Brian Olivan had whipped over a tempting cross, 3-1.

He hit the post later on and was one of our better players on Monday night. Could Mallorca make a bigger comeback than Lazarus ? The answer – No !

Fuenlabrada were now coming under pressure but they were like whippets up a drainpipe when they counter-attacked.

From one of them they sealed a famous victory when substitute Pathe Ciss made it four for the home side to complete our humiliation, 4-1.

SUMMING UP : This was a game Real Mallorca will want to forget as they move on quickly and play another promotion-chasing side, LEGANES, IN THE SON MOIX THURSDAY NIGHT AT 19:00 hrs.

Ex Mallorca boss Jose Luis Oltra came back to haunt his ex employees. His Fuenlabrada side were gifted their first home win since September by a Mallorca team who’ve totally lost confidence.

I said back in November that we’d gone top too early, and I questioned if we could stay the course.

With just 11 games left, Mallorca’s promotion train has hit the buffers at precisely the wrong time. We knew what we had to do on Monday night and have no excuses – we “bottled it” big time.

The game was lost due to three glaring defensive errors. Any neutral would say it was difficult to decide which one of Reina’s two gifts was the more comical ! He’s at the veteran stage of his career and is experienced enough to get over his blunders but on Monday night he must have wished he had never got on the plane to Madrid.

To his credit he has saved us on countless occasions this season. Towards the end LGP withdrew four players with a view to tomorrow’s six-pointer and the last 20 minutes turned into a painful procession.

As fellow socio John “Pacharan” Ballard messaged at the end : “If we keep playing like this we’ll be lucky to make the play-offs !”