Fan's view: One chance, one goal as castellon beat mallorca 1-0

We haven’t come back after going behind all season

Real Mallorca once again threw away a chance to open up an 11 point gap between them and third-placed Almeria (who played last night) going down 1-0 to struggling Castellon on Saturday afternoon. With only seven games left to play, us fans are starting to get the heebie-jeebies, as our form of late has been well wobbly. However, as of today (before 9 pm), we still had an eight-point lead over Almeria, as other sides fighting to get into the play-off places are also dropping valuable points.

If this game had been a boxing match the towel would have been thrown into the ring before the end. Castellon were on the ropes for long periods yet managed to score the game’s only goal in the 24th minute. Without our two main strikers, Amath and Abdon Prats, we were woeful in attack and bereft of any goal threat. We won the possession count 30/70 but what good’s that when you can’t finish ?

Our coach Luis Garcia Plaza said on Thursday that the team couldn’t afford one second of relaxation as they go after automatic promotion and that every game from now until the end of May was going to be doubly difficult. His message seemed to have fallen on deaf ears as we huffed and puffed against Castellon but couldn’t blow their defence down. Saturday’s reversal meant that last night’s Almeria/Espanyol game took on a new significance.

In the first half Mallorca were all over the home side and as early as the second minute a mazy run from Murilo sent shock waves through the home defence. They seemed intent to defend in numbers and catch Mallorca on the break and that’s exactly how they took the lead in the 24th minute.

It was smash and grab time as Castellon went on the charge in what was their first (and only) real attacking move in 96 minutes of play. The ball bounced off Martin Valjent (in his 100th game for Real Mallorca) and Ruben’s measured cross was strongly headed in by Ortuno unmarked at the far post.

Our full back Joan Sastre was at fault for letting Ortuno get his chance and Sastre was taken off in the 55th minute. Even with just 24 minutes on the clock it was going to be difficult for Mallorca to grab an equaliser. We haven’t come back after going behind all season. At half time a draw looked a good result for us.

After the break we attacked from all directions to no avail as the home team held their defensive line along the edge of the penalty area. LGP then began to push the panic button and rang the changes. 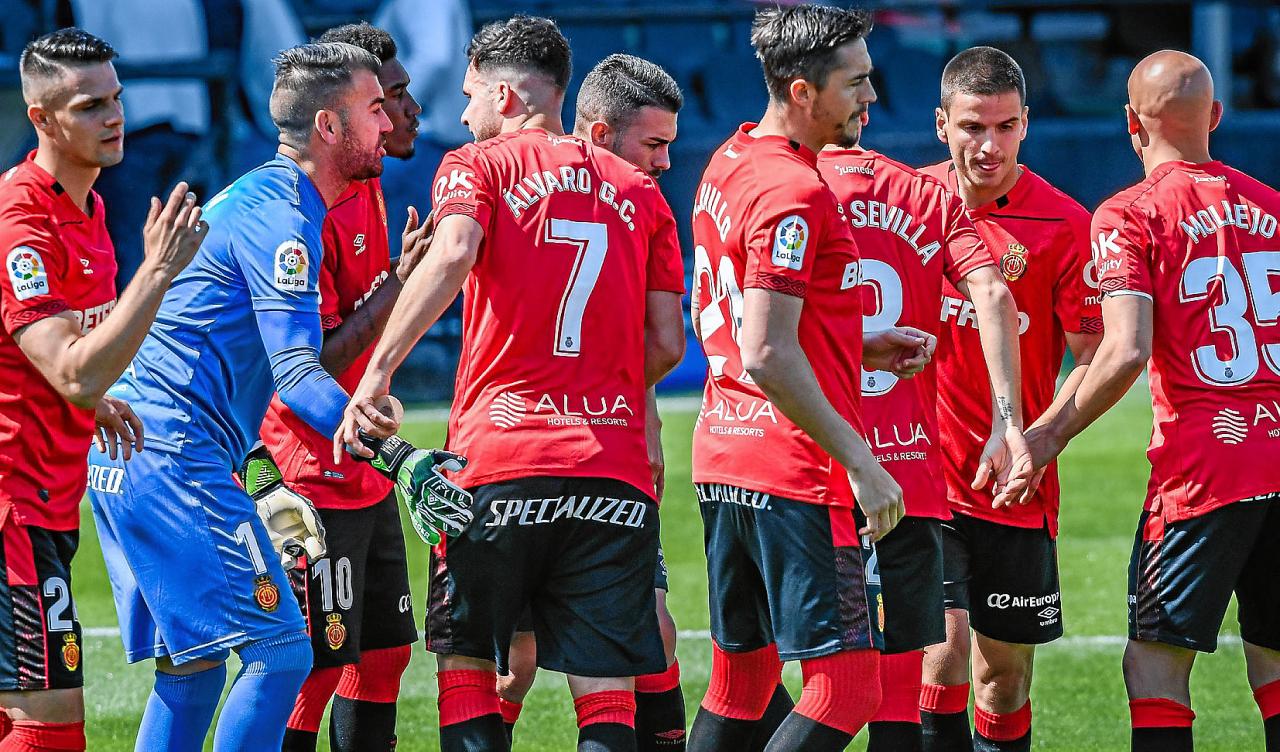 Both starting wing backs were replaced and a little while later Galaretta (who didn’t look fit after a seven-week lay-off) and Murilo made way for Febas and Mboula. Even with the changes we continued to have most of the possession but the pressure failed to translate into goals. The home side defence stood firm and we were getting more and more frustrated.

Time was running out for Mallorca and the absence of any kind of killer in the 18 yard box remained a worry. Then with seven minutes remaining we thought “hope had sprung eternal” when our clearest chance suddenly appeared. In the 82nd minute we won a corner down the right. Salva’s kick reached Alvaro Gimenez totally unmarked 6 yards out, he had all the time in the world to control the ball and pick his spot in the net.

Instead he hit it with his left foot down into the ground and it bounced harmlessly over the bar. Big chance wasted. Gimenez, on loan from Cadiz, has been disappointing (12 games, 495 minutes, one penalty goal) as have all the winter transfer signings. Gimenez scored 20 for Almeria two years ago and has not responded to what was expected of him.

SUMMING UP : At the moment we look like a rabbit stuck in the glare of car headlights. Perhaps the result was unfair but it doesn’t matter how you play, scoring goals is the name of the game. The difference between the two teams on Saturday was Castellon defended almost perfectly – and the other team, Real Mallorca, attacked without ideas.

Next Monday (26th) at 9 pm we face another possible “banana skin” game away at second bottom Sabadell, surely we won’t lose that !!!

AND FINALLY, Olaf the Viking Norseman is shopping at a supermarket when he comes across an old lady in a wheelchair, almost in tears. “What’s the matter ?” asks Olaf. “Oh,” sobs the old lady, “I want to have a look at the frozen puddings but, as you can see, there are three steps down into the chiller cabinets.” “No problem,” says Olaf, lifting her onto his back.

“I’ll take you.” Olaf strolls through the chiller cabinets with the old lady on his back. She selects several puddings and puts them in the basket he is carrying for her. “I’d really like to thank you,” says the old lady as Olaf sets her back down in the chair, “but I don’t even know who you are !” Olaf just waves and walks off. “I was really worried about you,” says the old lady’s husband. “What have you been doing ?” She replies : “Well, I’ve been through the desserts on a Norse with no name.”