After a week when a sign outside a shop in Glasgow read “Every day thousands of innocent plants are killed by vegetarians – help end the violence – eat meat !” – Real Mallorca, with only two wins in 17 games, suffered their third defeat on the bounce on Saturday afternoon, going down 2-0 to bottom-of-La-Liga Levante, who hadn’t won a game since March 12, 2021.

Three weeks ago 39-year-old Granada striker Jorge Molina scored a hat-trick against us.
On Saturday, 36-year-old Roberto Soldado (Bobby Soldier) and 34-year-old “Comandante” Morales scored two more. What is it with these “old timers” hitting the net against Real Mallorca?

A late disallowed goal from striker Fer Niño (after the ball hit Salva Sevilla’s hand in the build up) was enough to help Levante over the line, giving them their first three points for 273 days. Already being written off as sure-fire relegation candidates, their players and staff went into raptures when the final whistle blew.

Just after half time, Levante got the goal they deserved after some shocking defending from Mallorca’s makeshift rear guard.

Soldado found himself in acres of space, unmarked, and fired in the opener.
Levante gifted us a penalty when Pier appeared to trip Niño in the box and after a lot of faffing around (three minutes) substitute Brian Olivan’s tame effort from 12 yards was easily saved.

Replays showed the Levante ’keeper was off his line but the referee and VAR didn’t even bother to look at the replay.

After the miss, Mallorca’s heads went down and it was no surprise when Morales finished us off.

When he scored, I’ve never seen a bar empty so quickly. The Mallorcafé was like the Marie Celeste!

Before this game started, Terry Gibson on La Liga TV said “No team wants to go through the ignominy of losing to a side who haven’t won since Spring last year.”
We were just that team in what was an embarrassing defeat.

Mallorca, like every other team in La Liga, were badly hit by absentees through Covid, suspension and injuries. 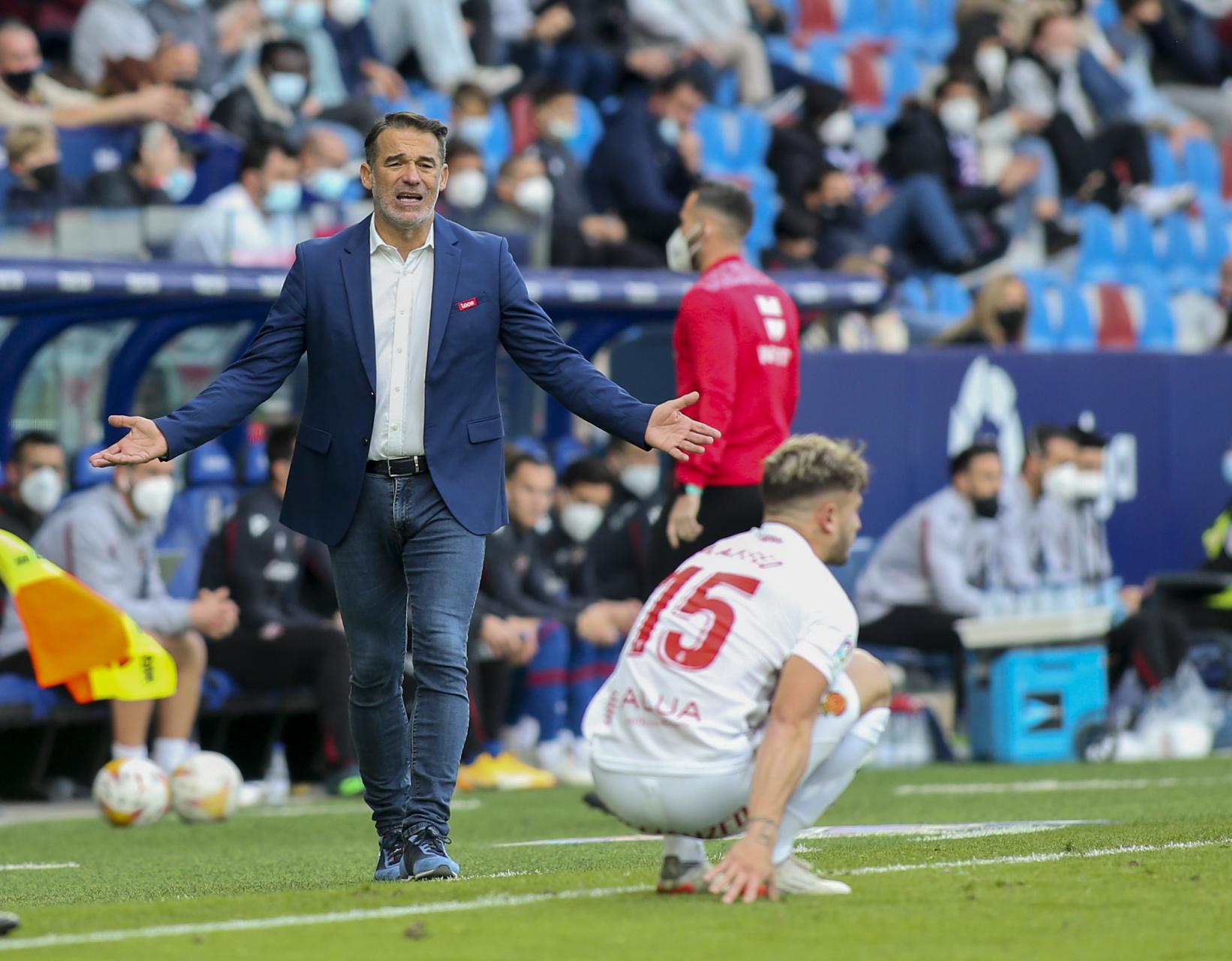 It’s bad enough losing to a strike force (Soldado and Morales) with a combined age of 70, but when two of our youngsters from the B team, Leo Roman and Javi Llabres, were our best players, not only can you understand why we lost, but we have to ask ourselves – how come we’ve got 20 points?

Mallorca are now in serious trouble and need to bring in new players as quickly as possible.
With Lago on loan at Huesca and Febas gone to Malaga, it appears Joan Sastre is next out the “salida” door.

That frees up three spaces to sign reinforcements and technical director Pablo Ortells has to move swiftly before all the best bargains are snapped up.

Coach Luis Garcia Plaza took the step a lot of Mallorquinistas wanted and that was to leave goalkeeper/captain Manolo Reina out.

His deputy Leo Roman showed confidence and security (especially with the ball at his feet) and Llabres was our best attacker in the first half, even forcing a save from the Levante ’keeper.

Levante’s Roger Marti smashed a header off the bar in the 50th minute and by this time Mallorca were all over the place.

LGP brought on Amath and Olivan to no avail. With the clock ticking, more subs were introduced, this time Salva Sevilla and the American Matthew Hoppe who hasn’t played since the start of the season.

Full time couldn’t come quick enough for Mallorca fans as this certainly was a game to forget.

Next Saturday at 4 pm in the Son Moix we have a bit of respite from our La Liga struggles and play Espanyol in the last 16 of the Copa del Rey.

On Thursday of next week we were scheduled to play Real Sociedad in Palma. However, because they have to face Atletico Madrid in the cup between January 19-20, the day the Basque club were meant to play us, La Liga will have to find a new date, as the cup tournament is subject to a much tighter calendar.

Therefore our next scheduled league game is away at Villareal on January 22 at 4:15 pm.

SUMMING UP: We’re continuing to live off the three games we won at the start of the season but for now we’ve hit a huge pothole in our survival road.

After the game, LGP said “This is the most painful defeat of the season, we need to recover players and increase performance.” Asked why he (unbelievably) brought on Abdon Prats with less than a minute to go, the coach was non-committal, saying only that he had to find a striker who scores goals – no sh*t, Sherlock!

After Saturday’s result, there’s been a huge input of opinions on social media.
Here are a few :

(2) If the best player is the B team goalkeeper, you have problems.

(3) Excuses are no longer enough, at least in the first half of the season there was desire, we stood up – now we crawl.

(4) Take Kubo, if he hopes one day to go back to Real Madrid and be part of their squad, I have bad news for him.

(6) Some players trotted through the game and passing the ball back to the goalkeeper when you’re a goal down with five minutes to go is unforgivable.

(8) At the end of the day, Levante are still rubbish – we’re just more rubbish!!