Mallorca have to learn to see games out until the end.

Real Mallorca came from behind, scored two penalties, hit the post twice and beat Cadiz 2-1 in front of 13,226 ecstatic fans on Saturday afternoon. The win sees the Palma side open up a five-point gap between themselves and Cadiz in what was a thoroughly deserved but hard fought three points and was our first La Liga home win since October 2.

The game started at a frenetic pace and the visitors went ahead with a stunning strike after just eight minutes. Negredo’s pass found Ruben Alcaraz just outside the penalty area and he sent an impressive effort into the top-left corner past a well beaten Sergio Rico to give Cadiz the lead. To their credit, Mallorca got a quick equaliser. Cadiz defender Alejo pulled Brian Olivan over in the box and Salva Sevilla made no mistake from the spot.

From that moment on it was all Mallorca in what was our best first-half performance of the season and we had several chances to complete the comeback with both Olivan (what an engine he has) and Take Kubo coming close. 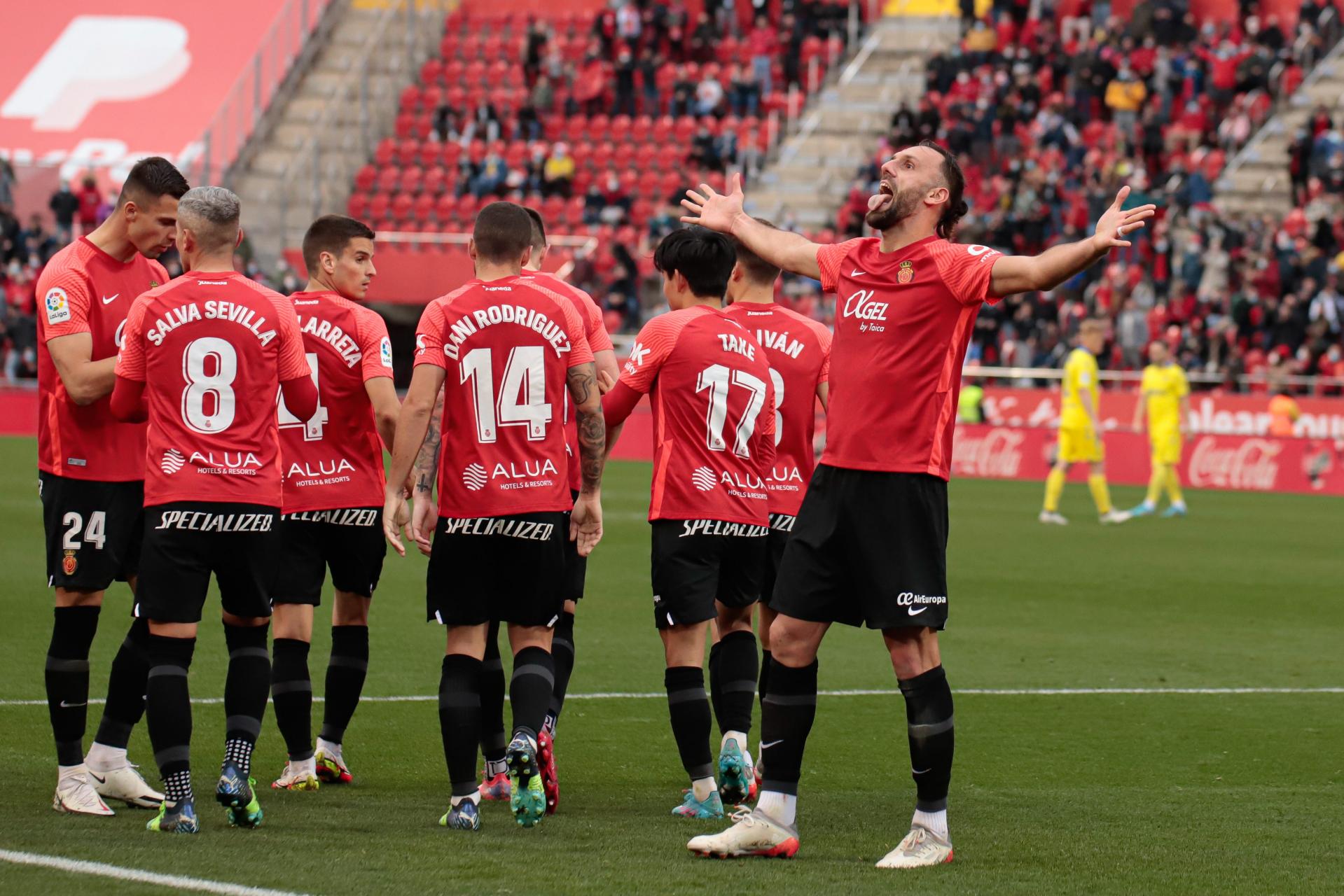 Then an excellent save from Cadiz ’keeper Ledesma from a powerful Muriqi header kept the scores level. On the stroke of half time Rico made an outstanding double save and for Mallorca, Angel’s effort unbelievably hit one post, rolled along the line hitting the other post before being cleared. It was a fitting end to a brilliant first half. In the second period it was more of the same and on the hour mark came the game’s controversial moment.

Ledesma went to clear a high ball, catching Angel in the face with his knee and the Mallorca player was pole-axed as the medical team rushed to his aid. After several minutes’ treatment, Angel wobbled to his feet and I’ve no doubt would have the mother of all black eyes on Sunday morning.

FIFA referee Del (boy!) Cerro Grande (who had a good game playing advantage on several occasions) was called to view the screen by the video assistant referee in Madrid. Señor Grande awarded another penalty to us (the Cadiz players and staff were furious with the decision) and this time Muriqi stepped up to send Ledesma the wrong way, 2-1. That goal was the Kosovan’s first in a year!

Cadiz by now were pushing the panic button and threw everything at Real Mallorca. Despite putting our defence under severe pressure, we somehow survived with the referee adding on TEN EXTRA MINUTES! Then at the death, substitute Abdon Prats saw his effort hit the righthand post with Amath missing what looked like an easy chance to score from the rebound.

The long-awaited victory of Mallorca in La Liga finally arrived on Saturday in what was an exciting game of football, animated and a real nerve jangler. Our fans played a major part in this win and there was a real buzz from them as they exited the Son Moix after 101 minutes. Coach Luis Garcia Plaza played a 4-4-2 system which worked a treat. On an individual level without a doubt the great protagonist was new (on loan from Lazio) Kosovan striker Vedat Muriqi whose powerful presence tormented the Cadiz defence all game.

It was a good idea to give him the second penalty as he hadn’t scored for Lazio for 12 months. Let’s hope he can now go on and bang in shedfuls of goals. Other top performers were Salva Sevilla (we play so much better when he’s pulling the strings in midfield from the start and at 37 years old he’s definitely our version of Benjamin Button) and Brian Olivan was magnificent up and down the left flank.

Angel must also be mentioned in despatches for his tireless work ethic up front. After being taken off in the 69th minute, he went to hospital and spent the night under observation as a precautionary measure. A special mention must go to Antonio Raillo who played the whole game after being out with a serious ankle injury for six months. Our back four looked so much tighter with him returning at the heart of the defence. However he almost scored an own goal in the 84th minute, the post coming to his and our rescue.

Mallorca have to learn to see games out until the end. We panicked big-time with the clock ticking down and the last 10 minutes was like the Alamo as wave after wave of Cadiz attacks were repelled.

Saturday’s win was a huge boost and gives us a bit of breathing space over Cadiz, who remain in the bottom three. Next Monday (14th) we’re at home to At. Bilbao – kick off 9 pm. Our postponed home game from the other week against Real Sociedad has been rescheduled for Wednesday, March 2 at 9 pm.

After the game, in the tunnel, Cadiz players and hierarchy which included the president’s son, harangued Carlos del Cerro Grande to air their views in no uncertain terms regarding the controversial second penalty award, and a letter of complaint has been sent to the Spanish football headquarters in Madrid – good luck with that!

A husband and wife had been married 42 years and in all that time he had forbidden his wife to look in the safe. One day he came home from work and his wife told him “I’ve looked in the safe.” He was not best pleased and said “Well, what did you find?” She replied “£12,000 and three eggs.”

He came clean, explaining “Every time I slept with another woman, I put an egg in the safe.” “So three women in 42 years?” the wife pondered, “I guess that’s not too bad, I forgive you.” She then asked “Where did all that money come from?” “Oh,” he answered, “every time I got a dozen eggs, I sold them.”