2,000 Real Mallorca fans returned to the Son Moix on Thursday night with a fitting farewell to two of the most important protagonists in the club’s recent history, Salva Sevilla and Manolo Reina. | Majorca Daily Bulletin reporter

After a week when it was a case of migrants fight back when more than half of the 130 asylum seekers deported to Rwanda were leaving negative reviews on TripAdvisor! – around 2,000 Real Mallorca fans returned to the Son Moix on Thursday night with a fitting farewell to two of the most important protagonists in the club’s recent history, Salva Sevilla and Manolo Reina.

Both of them arrived on these shores five years ago after our painful relegation to Segunda B, and they were mainstays in our back-to-back promotions.

They were again key in our return to La Liga under Luis Garcia Plaza but last season didn’t enjoy the same regularity in the starting XI. However, they became vital members in the decisive final stretch of a troubled campaign in which the team achieved an agonising last match escape from relegation, winning 0-2 away at Osasuna. Both players leave Real Mallorca after their contracts expired, with over 300 appearances between them.

Salva Sevilla (38) departs the club having played 186 games, scoring 25 goals and 21 assists. He’s joined recently relegated Alaves on a year-long deal. They are now managed by our ex coach Luis Garcia Plaza. Many Real Mallorca fans (and indeed the player himself) would have liked to see Salva Sevilla see out his career here and be given a coaching job or some position on the backroom staff. He was upset that the club hierarchy didn’t tell him until the last minute that his contract wasn’t to be renewed.

Goalkeeper Manolo Reina was one of the best shot-stoppers ever to don a Mallorca shirt and led the team on numerous occasions as captain, making 174 appearances. His brilliant 98th minute save in our 0-0 draw at Seville towards the end of the season is one of the main reasons we’ve remained in La Liga. Thirty-six-year-old Reina is returning to his home city of Malaga where he’s likely to turn out for the La Rosaleda side next season.

As I mentioned last week, the club’s attempt to sign Kosovan striker Vedat Muriqi (who scored twice for them on Thursday night against Northern Ireland) looks likely to go down to the end of this Summer’s transfer window. According to the Italian sports paper Corriere dello Sport, his parent club Lazio won’t be willing to sit down and talk for less than 11 million euros while Mallorca would only be willing to negotiate below 10 million.

The Muriqi case looks to become the big soap opera of the Summer. His brilliant six months here since arriving on loan in January has seen him quickly adapt to the club’s philosophy and he has become a huge favourite with the Mallorca fans.

Although he’s top priority on our shopping list, there are many factors that have to come together in negotiations that are expected to be complex and long. Lazio are one of the leading Italian clubs and aren’t exactly strapped for cash. But they are aware Muriqi has resurrected his career in Palma and his selling price has been revalued so Lazio aren’t about to give him away on the cheap.

During a recent interview our director of football Pablo Ortells was quoted as saying “Signing Muriqi is our priority, our whole transfer roadmap revolves around what we have to pay for the Kosovan internationalist.”

It’s also a priority to sign a goalkeeper with Fernando Pacheco of Alaves being mentioned.

We signed a goalkeeper about this time last year called Dominik Greif from the Slovakian league. His contribution to the Real Mallorca cause has been severely hampered by a mysterious back injury. He’s only played two games in a year. One was in a cup match against Segoviana and another in a home league game against Osasuna which was a disaster – not because of the three goals he conceded but also because of his excessively nervous behaviour. He took over from Reina who was in goal when we lost 6-1 against Real Madrid.

We signed PSG’s third choice goalkeeper Sergio Rico in January, supposedly as our guaranteed first choice ’keeper. Unfortunately he was an unmitigated disaster. We have an Ibizan-born goalkeeper called Leo Roman who’s just signed a contract extension and is being described as one for the future. It’s highly unlikely he’ll be a regular starter next season so the need for a goalkeeper that doesn’t generate doubts or debate is priority number two.

This goalkeeper must have experience and good temperament, as we can’t start a new season with uncertainty between the sticks. From goalkeeper forward the rest of the team has to be remodelled from top to bottom.

The Son Moix stadium is changing its appearance from an athletic stadium to a football stadium day by day. A small army of workmen have begun to remove the running track from the Sol Alta/Baja side of the pitch and replaced it with the new set-up which would mean fans will be a mere 7.5 metres from the pitch. 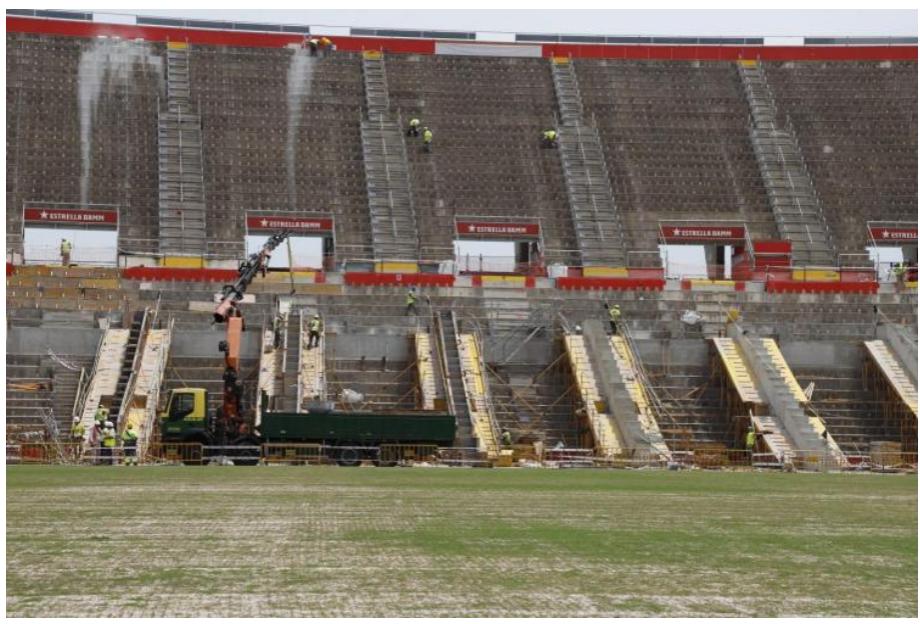 If the work on the sun stands is not complete before the start of next season Mallorca will ask La Liga to organise the fixture list so we will play our opening games away from Palma. With the work in progress, the Son Moix capacity for next season will be reduced to 19,000 (to be increased later up to 23,000).

The old Luis Sitjar stand which was behind the North goal has now been moved behind the South goal and work will begin on the North end next Summer. The club also hopes that the new seats in the upper part of the Sol stand will be fitted next week while the roof over the stand is expected to be fitted next month.

AND FINALLY, the first case of monkey pox in the Balearics was confirmed in Formentera, so what can we expect next? How about Giraffe pox – a possible swollen neck; Rhinoceros pox – those afflicted charge at Jeeps; Goldfish pox – long term memory loss; Hamster pox – stay away from fairgrounds or it might take four hours to get you off the big wheel; Elephant pox – inflammation of the nose and ears and Bat pox – that explains why granny/mother-in-law is hanging upside down in the loft!!