Shot-shy Real Mallorca, playing at home in the match to mark 100 years to the day since the club was formally founded, beat ten-man Oviedo 1-0 in front of nearly 15,000 fans at the Son Moix on Saturday night. In a "scrappy do" of a game, where the football played on the pitch didn’t live up to the atmosphere off it, a 49th minute own goal by Oviedo defender David Fernandez gifted Real Mallorca all three points, which they hardly deserved. Oviedo were reduced to ten men in the 36th minute when Dani Bautista had a two-footed lunging tackle on Lago Junior and referee Elriz Mata had no hesitation in showing the "Los Carbayones" player a straight red card and the early bath.

The visitors started brightly enough, showing the home team just why they had been on a twelve-game unbeaten run and are challenging for promotion. As early as five minutes a shot fizzled past our left post, Mallorca just couldn’t get out of their own half. We tried to get back into the game but it was the same old, same old. We didn’t press enough, gave the ball away far too often and, when we came in sight of the Oviedo goal, didn’t have a clue what to do. Surely when the goal’s in view it’s best to shoot towards it. When you’re struggling down the wrong end of the league, trying to walk the ball into the net is a definite no-no, but that’s all down to confidence, which is at a low ebb.

Fernando Vazquez pulled a major surprise by picking Acuña to lead the attack in place of Ortuño because, according to the coach, the former is better in the air. In fact he was even worse with the ball at his feet and I’m afraid Acuña’s another misfit striker at Real Mallorca. Ortuño is our only genuine no. 9 and for me should start every game.

At half time the fans were starting to get twitchy because we hadn’t threatened the Oviedo goal once in the first period. Then in the 49th minute Mallorca were thrown a lifeline (a goal which could well define where we finish up at the end of the season). Campabadal broke out of defence, passed to Lago Junior, whose tempting cross was turned into his own net by David Fernandez, beating his goalkeeper Esteban all ends up. Now, we all thought, up against ten men and a goal ahead, we should go on and win this game easily. In fact it was the complete opposite. Mallorca spent most of the second half defending and it looked a distinct possibility that Oviedo would nick a late equaliser, which in all honesty they deserved.

Somehow Mallorca hung on to gain three valuable, if fortuitous points which puts them in 16th place with two away games against teams round about us, Llagostera and Huesca, on the horizon. After the weekend’s results, we’re still circulating around the relegation plug hole, three points from the bottom four with a game in hand.

Summing up
Saturday’s match was like the old days at the Son Moix. Before the game, thousands of fans congregated outside the Mallorcafé and enjoyed a giant paella. It was a real party atmosphere and to see the ground almost full was very reassuring. Even the south end, which had been closed for two seasons, was full and it’s just a shame the footballing show on the pitch was pretty awful.

Obviously we’ll take three points however we can, but if Oviedo had eleven players on the pitch on Saturday, the scoreline would have been different. Even with their ten men, they forced five corners to our two and won the possession count 45-55. The star of our show was once again Lago Junior whose pace caused Oviedo’s defence no end of trouble. He’s been the only one of our six winter signings to reach expectations and is head and shoulders our best player. Stats showed that in the six games Vazquez has been in charge, five of our eight goals scored have come from either penalties or own goals. We need more from open play. It was once again so frustrating to watch Real Mallorca trying to score a goal; they sure make life difficult for us fans.

But it was these fans who were the stars of the show on Saturday. The club’s cheap ticket incentive paid off big time and it’s such a shame they couldn’t have witnessed a better performance from the Palma side. Both goalkeepers were more or less spectators throughout the game and, as I said on Saturday, a war of attrition took place on the pitch in front of us. When the fourth official put up the board with just two minutes extra time added (how could that be after there were five substitutions?), some comedian in the crowd was heard to say "two minutes more of agony".

New owner Robert Sarver was keen to stress that there is a lot of work to be done at Real Mallorca both on and off the pitch. He said it was never going to be easy taking over a club in the middle of a season but repeated that his team were in it for the long term. He also commented that Real Mallorca will be going to the States in the summer to play in exhibition games. It’s difficult to feel optimistic after Saturday’s poor performance but we got a win on Saturday thanks to Oviedo’s generosity.

Let´s face it - Oviedo did their best to help Mallorca. They got a man sent off, scored for us and missed a couple of sitters. And even the ref tried to help Mallorca out on a few occasions. Still, a win is a win. 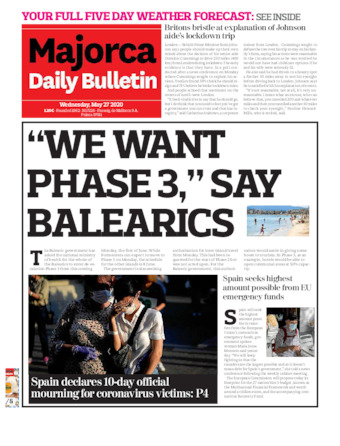