The food of Spain reflects it’s complicated history and the incursions of its many settlers; Phoenicians, Romans, Greeks, Arabs and Moors have all left their imprint on its cuisine. The further north you travel the influences become more European and the further south you go the flavours and ingredients are more associated with Morocco and North Africa. Almonds, olive oil, dates, orange blossom water and the use of spices become slightly more prominent. I must admit that I have always loved Middle Eastern cookery and I find the spice mixes and flavour combinations incredibly intoxicating.

When food writer Claudia Roden first published “The Book of Middle Eastern Food” in 1972, the cuisines of Morocco, Turkey, Greece, Egypt and their neighbours were a mystery to most of us. Her groundbreaking book celebrated Arabic cookery in all its opulence and variety from the refined tagines, substantial meze platters, and spicy meat dishes and off course, all those wonderful sweet pastries. As she says herself, “every recipe tells a story” and I still enjoy flicking through my very old, beaten up copy of her book from time to time, looking and usually finding inspiration.

One of the classic recipes I love to make is a Tagine and they can be cooked up from almost anything from fish, lamb, chicken, beef, goat and sometimes-even camel. I’m not too sure about the merits of camel but what they all have in common is long, low, slow cooking and a lamb tagine with apricots is my personal favourite. A tagine is traditionally cooked in a special clay pot known also as a tagine. And yes, a proper tagine would be ideal for this recipe, mainly thanks to the flavours apparently produced by the traditional unglazed earthenware, but if you don’t have a tagine, any wide, shallow pot with a tight-fitting lid will do the trick.

In this recipe I’m using dried apricots but you can also substitute them with fresh as they are slowing coming into season right now. Most tagines are finished with a scattering of flaked almonds or sesame seeds fried in a little butter, which adds a nice crunchy texture to the finished dish; the freshness of coriander leaves also add colour and freshness. If you’d really like to impress; a red onion and pomegranate salsa is also a lovely pairing, and brings a flash of colour to the plate, too.

For me, this famous, delicious Moroccan dish, scented with an exotic and tantalising combination of cinnamon, cardamom, coriander and cumin is all about simplicity and choosing good ingredients. As with many time-honoured recipes from the Mediterranean, it is not about experimentation, it is about technique and cooking simple dishes in a pleasantly unfussy way. I hope this recipe inspires you to get into the kitchen and cook delicious from your heart.

This full-flavoured tagine is a cheap, healthy way of getting extra vegetables into your family’s diet.

2 Heat the olive oil in a large, non-stick casserole pan over a medium heat. Add the sliced onion, garlic and ginger cook gently for 3–4 minutes, or until lightly browned.

5 Add the vegetable stock and cook for 2–3 minutes.

6 Cover and transfer to the oven.

7 Cook for 35 minutes, then stir in the cherry tomatoes and sir until well combined and return to the oven, covered, for a further 15 minutes, or until the tagine is thick and the vegetables are tender.

8 Season with salt and pepper and sprinkle the tagine with the chopped coriander and a few sliced dried apricots. 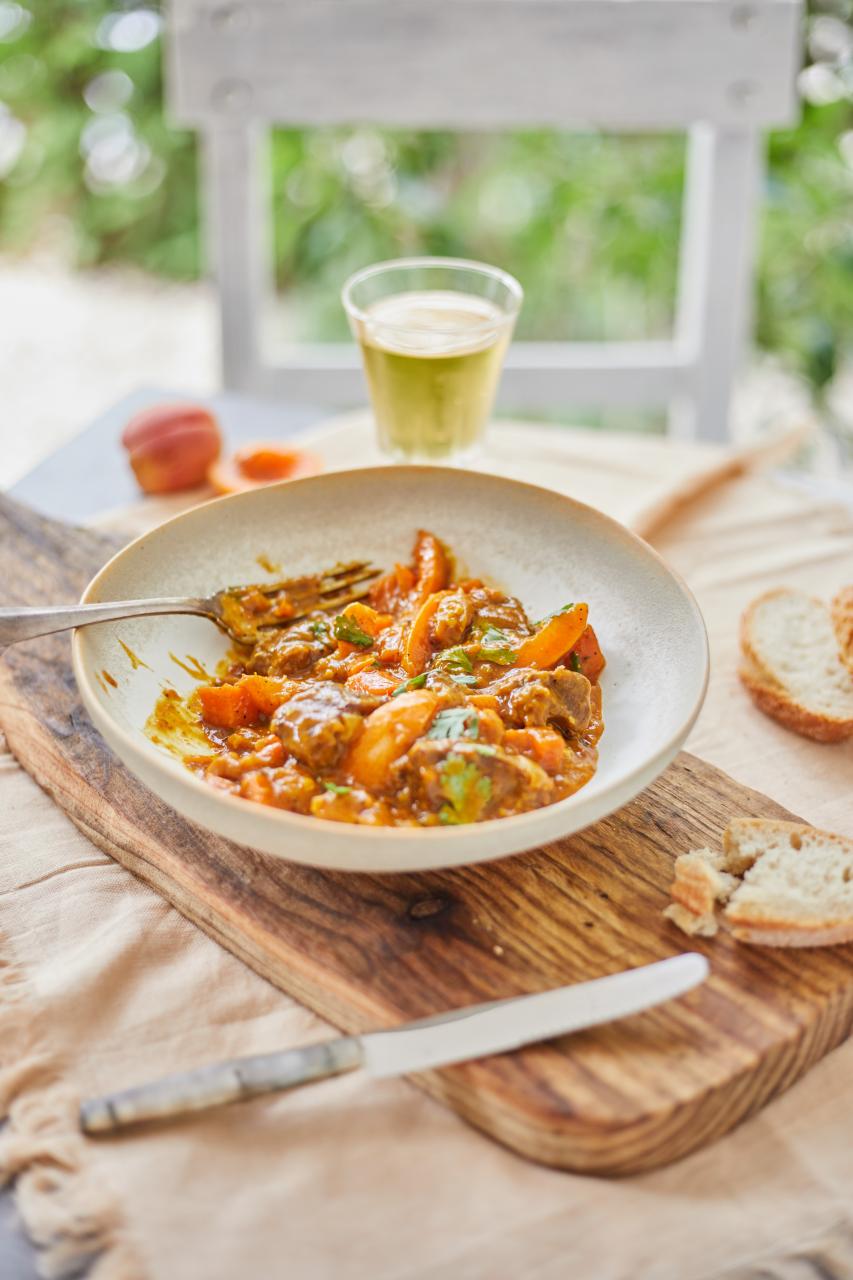 This recipe is from my cookbook - Modern Mediterranean: Sun-drenched recipes from Mallorca and beyond.

1 In a large bowl, mix the lamb with the cinnamon, cumin, sweet paprika and cayenne pepper, cover and transfer to the refrigerator to marinate for at least 4 hours, or overnight is ideal.

2 Warm the olive oil in a large heavy saucepan over a medium heat, add the marinated lamb and brown on all sides.

3 Add the onions, carrots and garlic and cook gently for 1–2 minutes.

4 Then add the saffron threads, stock (bouillon), tomatoes and apricots.

5 Bring slowly to the boil, season with salt and pepper, then cover with a lid, reduce the heat to a gentle simmer and cook for 1 and a half hours.