Never mind the chaos at UK airports, it appears that Palma is still having problems at passport control.

Tourism chiefs have been calling for more customs staff in order to handle the influx of British tourists this summer but so far, the airport does not appear to have stepped up the number of staff and readers are complaining, yet again, of long queues. 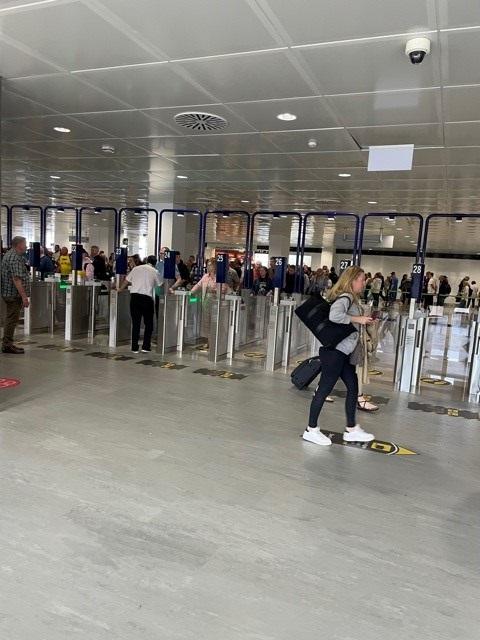 Mark took these pictures of arrivals this week with the comment: “Its going to be a nightmare this summer at the airport if its going to be like this !!!”

Despite the airport having had plenty of time to get ready for the post Brexit rules for British tourists, there are going to be more problems ahead.

Now non-residents arriving in Mallorca have to have their passports stamped on arrival and departure and it is vital that British travellers get their passports stamped because of the 90-day rule. Considering the chaos Britons are having to endure when departing the UK at a number of key airports due to a lack of staff, the last thing they want are further queues when they arrive in Palma.

What is more, Britons are having to make sure their passports are in order before they travel. This will be the first summer Britons have a real opportunity to travel since the UK left the European Union and, with Europe the most popular location for overseas trips each summer, ABTA says there are some differences that people need to be aware of and prepare for before they head to their favourite destinations.

Holidaymakers need to check their passport will be valid as, when travelling to the EU, your passport can’t be older than 10 years when entering the country and you need to have at least three months left on your passport from the date you return.

It's likely that this is another of the contributing factors leading to the increasing dominance of European tourists to Mallorca. Aside from the economic challenges Britons face. But then, Brits have never been the largest segment here.

@Stephen Grimmer. Yes you are quite right of course. I tried to make my statement simple without bringing Schengen into it but realised after I had posted my comment that I should have used Irish rather than German as an example.

Just reading the article on UK Passport requirements today. You say your passport canot be older than 10 years old when entering the country. We were leaving Leeds 3 weeks ago and Ryanair refused my wife because her passport was not valid. It was due to run out March 2023 so obviously it was valid. After much debate they still would not let her board. Aparently the rule is 9 years and 6 months from ISSUE date for travel to be allowed. We did check and somewhere on the .GOV website it does confirm this. So wasted flights / Car park / Kennels later we returned home. Surly the Airlines need to point this out. When online check in it actually asks for end date of the passport not 9 years and 6 months from issue date WELCOME TO BREXIT

SaraEU residents except for the Irish (eg Germans) don't even need to show a passport (or ID) or clear customs. That's Schengen for you. Simply walk off the plane, collect your bags and exit land-side. That's the reality at Terminals B, C & D. Arriving from Berlin is no different to arriving from Barcelona (Covid rules aside).

Interesting.. I'm traveling to UK monthly for the last two years, queues at Gatwick, Luton and Birmingham passport control or safety check are INSANE! Nothing compared to Mallorca! British arrogance it's showing in all these comments, you wanted Brexit without consequences. The truth is that Mallorca without English people will be without doubt a better place.

Stan The Man | 9 months ago

Who is responsible for this incompetent Management. They should resign, or be sacked. The Police, the Security, are a disgrace to their professions. Their Managers lack intelligence and planning. Hang your heads in great shame Palma Airport. You are failing Mallorca and its Economy.

I was there yesterday and the queues weren't bad at all.

Well the Brits will put up with it for a period of time as they are used to queuing. My experience of Palma over the last 20years is either no checks or an hours wait while all faces are checked. The Portugueses have fast streaming for U.K. entries so this may colour desirability of Mallorca for U.K. tourism later in the year. I personally feel the party brigade that Majorca wants to discourage will be undisturbed by this type of delay, the higher incomes desirable visitors will be. Caution the yanks don’t do queues so if Palma airports want to smother it’s new trade at birth have delays. End of USA trade no bother.