We don’t really know what the weather is all about until it affects us in a negative kind of way. Last February’s mild and sunny days were a joy for most of us — especially visitors from the cold north.

The damage done by those painful sunny days in February was obvious to the farmers even before this year’s apricot harvest got underway a couple of weeks ago.

We now know the crop will be about 75 per cent down – 15 tons as against last year’s 60 tons. That is a huge and tragic difference.

However, the weather is just part of the story. Last year’s harvest was exceptional because climate conditions were perfect. But it is also true that after an unusually fruitful harvest the trees produce less the following year. But even so, those warm February days didn’t do any good.

When the February weather is nice and sunny, some of the apricot varieties start to bloom — and that is so early the flower doesn’t become a fruit. Some trees didn’t produce even 50 apricots — not enough to provide for one family for one weekend.

The bulk of Majorca’s harvest comes from the Porreres area and last year growers started selling their apricots with an identification tag indicating they were exclusively from that part of the island. This was mainly to distinguish them from mainland apricots which, most us agree, are not as flavourful as the Majorcan ones. In some shops and supermarkets mainland apricots go on sale as being locally grown. The identification tags have put an end to that. 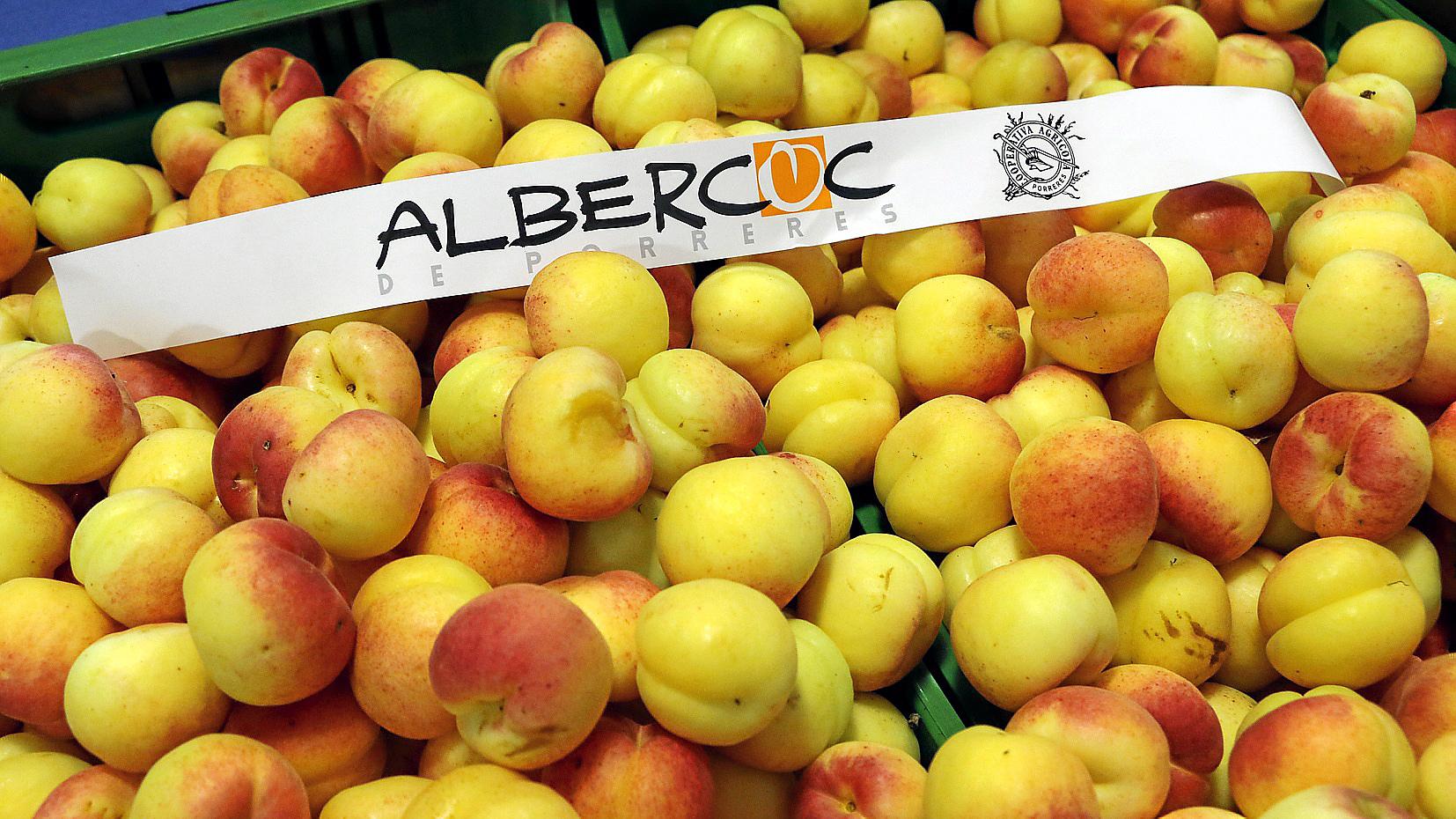 If you are seeing apricots at 99 centimos a kilo, as I do in shops where I live, you can be sure they are not Majorcan ones. When I want locally grown apricots I go to certain reliable stalls at the Olivar or Santa Catalina markets and also the better supermarkets.
The apricot is perhaps the summer fruit most associated with Majorca and not just because it is abundant, delicious and cheap, but because much of the harvest is turned into dried apricots which are the best I have ever tasted.

The apricot, albaricoque in Spanish and albercoc in Mallorquín, is one of the earliest summer fruits — and that is what its name means: it comes from the Latin praecox which also gives us precocious.

The initial ‘a’ was added by mistake owing to a false etymology.

Although the Latin for apricot is Prunus armeniaca, the fruit came from China and not Armenia. It is descended from a wild Chinese variety and was being cultivated in China more than 5,000 years ago.

The Arabs brought it from Persia to Spain and at first it wasn’t very popular because of various superstitions that surrounded it. It was said, for instance, that if an apricot tree leaf fell on one’s back it would cause incurable diseases.

Apricots were first taken to England from Italy in 1542 by Henry VIII’s gardener, a French priest and horticultural expert called Jean Le Loup, who later anglicised his name to John Wolf. By 1782 a Wigan nursery had published a catalogue with 14 varieties of apricots. The fruit crossed the Atlantic in the 18th century but didn’t get to Australia and South Africa until the turn of the last century.

More apricots are grown in Murcia than anywhere else in Spain, followed by the Balearics and Valencia. Apricots are one of the traditional fruits of a Majorcan summer and at their best they are juicy, full of flavour and have a memorable perfume.

The best apricots are ripe but firm, with plenty of colour and without blemishes. They can become overripe very quickly, so never buy large quantities unless you are going to be using them immediately.

As a rule, those with the stronger brighter colours will be sweeter. There’s one with pink tinges that has a delightful perfume. Majorca’s dried apricots, known as orejones, are more important to the local economy than the fresh ones. They are exported all over the world, to countries as far away as Japan and the United States, but hardly any of them go to the mainland. Spaniards there prefer those from Turkey.

Majorcan dried apricots aren’t as sweet as the Turkish varieties and because of that they have much more character. Their slightly acidic taste makes them ideal for use in Middle Eastern lamb stews and tajines. 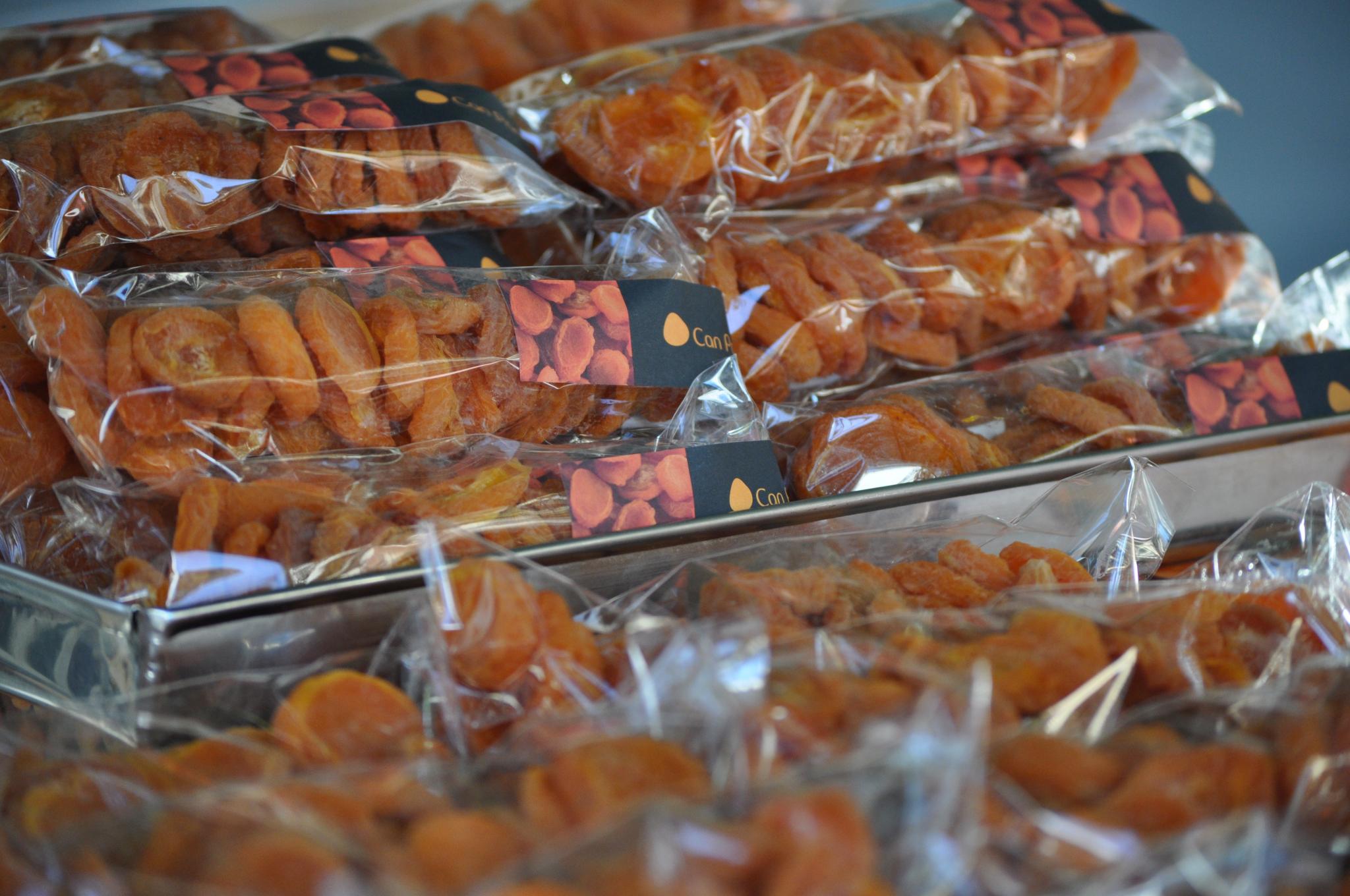 Turkish dried apricots are also on sale here but no Majorcan ever buys them and neither do I. It is easy to tell them apart: the Turkish kind are pale and anaemic and the Majorcan ones have a deep robust colour. The Majorcan variety is also a good bit dearer.

And it looks as if they will be even more expensive in the very near future. This year’s gigantic plunge in the harvest means there will be fewer dried apricots. Last year’s dried crop will soon come to an end and there won’t be huge amounts to take their place. That can only mean a rise in prices.

In a normal year, Majorca’s production of dried apricots is centred in Porreres and for three weeks in July it’s apricot fever time as the fruit is harvested and prepared for drying.

When the harvest is as huge as last year’s, the women of the town, and sometimes others from nearby villages, do a shift of 10 hours per day so the fruit can be put through the drying process as soon as it is harvested.

The apricots chosen for drying are always those that have fallen to the ground. The finest ones are collected in baskets and taken to the waiting army of women who slice them in two, extract the pits and place them on big wicker frames or trays, cut side up.

The kernels in the pits are later sold for the making of turrón, Spain’s traditional nougat that is an essential part of the Christmas table. It is on sale all year long, but the vast majority of Spaniards eat it only over the 12 days of Christmas.

Before being put into the sun, the apricots are put into rooms where sulphur has been burned. This process is legally binding in many countries including Australia. It is necessary to prevent discoloration and spoilage.

Two or three days under the Majorcan July sun are usually enough to dry the apricots. Before being put into wooden boxes they are carefully examined and any with blemishes are withdrawn to be used in the making of jam.

Only those in perfect condition are boxed for sale in Majorca, all over Europe, the United States, Japan, New Zealand and elsewhere — but not on the Spanish mainland.The apricot is the great culinary absentee. In my files I have fewer recipes for them than for any other ingredient. And when it comes to apricots in savoury dishes, it’s difficult to find any recipes outside of Middle Eastern cooking.

In Persian cooking there are superb dishes in which the acidity of the fresh or dried apricots brings out the sweetness of lamb. As the Arabs introduced the apricot into Spain from Persia and as the Arab influence on Spanish cuisine is still very obvious, you would have expected to find apricots in Spanish meat dishes.

But because of those early superstitions about apricots I mentioned at the start of this article, the fruit never caught on in Spanish kitchens. Although there was one exception – Majorca.

The only savoury Spanish dish I know of that uses apricots is one called capirotada, a Majorcan rabbit dish for which apricots are cooked and then used in the sauce.

Simmer a hole rabbit in water, salt, a bay leaf, thyme and a dozen grains of black pepper. When the rabbit is cooked but not overdone, take it out and leave it to get cold.

In the meantime, strain the stock into a stainless steel or enamel saucepan and add half a kilo of ripe apricots cut in half with the pits removed, plus a piece of cinnamon stick the length of your index finger.

Cook until the mixture thickens, remove the cinnamon and blitz the contents of the pan in a blender. Put this sauce on a low heat and simmer until it is thick and shiny. It should have a sweet-sour taste. Cut the rabbit into serving pieces and sauté them in virgen extra olive oil until they are golden. Take them out and in the same oil, adding a little more if necessary, fry as many slices of Majorcan bread (pan moreno) as there are pieces of rabbit.

Put the slices of bread on a flattish serving platter (or on individual plates) and top them with a piece of the fried rabbit. Spoon the sauce over the rabbit, covering it completely, and serve immediately.

Spanish cooks and housewives like to preserve all kinds of fruits and vegetables and there are two main ways of treating apricots: in a thick syrup or in alcohol of some kind, usually brandy or aguardiente.

In either case, any velvet-like covering on the skin should be removed with a soft cloth under running water. 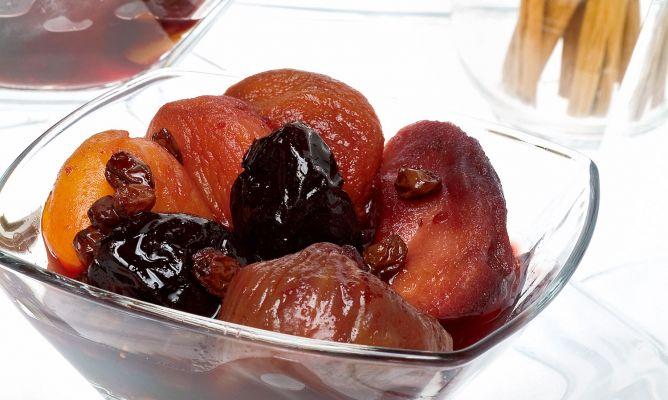 Compotes of all kinds are also popular, either with Spaniards who have their own trees or those who receive huge baskets of fruit from friends. Some of the fruit is usually eaten fresh and the remainder is made into jams or compotes.

The Basques even have a compote made with dried fruits. They mix together 500 grs of pitted prunes and the same of dried apricots, plus eight cored and sliced fresh apples, 500 grs of sugar and a piece of cinnamon stick the length of your index finger.

Everything is simmered over a low heat until the fruit is tender. If the syrup needs thickening it is poured off into another saucepan and reduced. It is then poured over the fruit which is stored in glass screw-topped jars until needed.

More than 100 years ago, Majorcan housewives sometimes added apricots preserved in syrup to a greixonera of sopes mallorquines. And today, some Majorcans use fresh apricots instead of olives to accompany a sopes during the summer months. As so often happens in country cooking, one eats what is in season and plentiful – and at its best.

Spanish cooks are fond of dipping fruit in batter and frying it and there is an apricot version that is popular. Use the biggest apricots you can find and cut them in slices. Leave them to macerate for an hour in brandy or kirsch and then strain them.

Dip the slices in beaten egg and then in fine breadcrumbs. Fry them in deepish virgen extra olive oil until they are golden on both sides. Sprinkle with caster sugar and serve immediately.

In pastry shops all over the island you will see two of the best things that get done to fresh apricots during the season: they are used to stud the surfaces of ensaimadas and also sweet cocas. 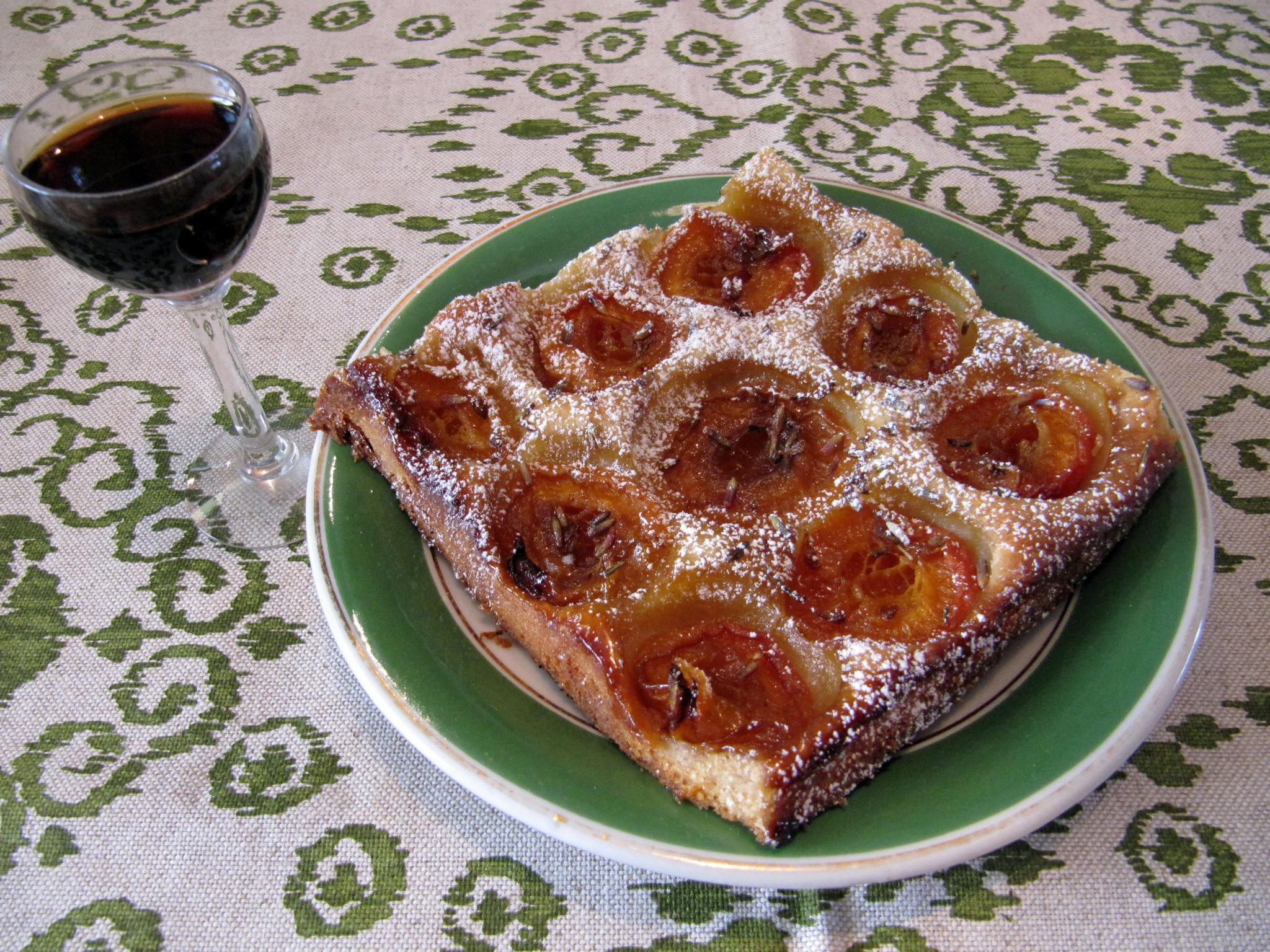 You will find excellent versions of ensaimadas de albaricoques and also coca de albaricoques in the centre of Palma and those I prefer are at Pastelería Fondo in Calle Unió just along from C&A going towards the Principal theatre. A medium-sized one costs around €14 and a larger one is priced at €19. These days they are my favourite ensaimadas.