The descent of the crow for the Sant Antoni fiestas in Mancor de la Vall. | P. PELLICER

“What on earth is there to do in Majorca during the winter?” That was exactly what most of our friends were asking when we first announced our move to the island over fifteen years ago. I think they imagined us shivering by frozen swimming pools, clutching lilos whilst waiting for the sun to shine again! Little did they know, through their own ignorance, that Majorca is not merely a sunny, summer holiday destination, but a thriving, culturally rich island showcasing gastronomy, music and the arts along with a wealth of traditions and a plethora of fiestas which actually don’t come into play until the winter months when all the seasonal tourists have long gone.

Personally, I’m just getting over Christmas, New Year and The Kings, which took us up to January 5/6 so was looking forward to a quiet respite when I could sit back and re-charge the batteries whilst finishing off the last of the Ferrero Rocher. But no such luck! With their unquenchable thirst for celebration and fiesta, the Majorcans are now gearing up for the fiery celebrations of St Antoni and the home fires of winter, all taking place across the island around January 16 to the 19. It’s best to check exact dates locally, as the celebrations do tend to vary slightly either way, depending on where you live.

St Antoni’s celebrated ‘Fiestas of Fire’ ignite extra early in some places, with the first flames flaring in Sa Pobla as early as January 7, lasting an entire month through to February 2. Historically, the fiesta of St Antoni is the most revered celebration highlighted in Sa Pobla’s annual calendar, and the first place I ever witnessed the event over twenty years ago. I must say, back then without any previous experience of demonis and fire runs, I thought the entire experience was absolutely thrilling. The female company I was with at the time however, found it quite terrifying, and in retrospect, I suppose all those flames, dizzy firework explosions and whirring catherine wheels held aloft on sticks were, and are, quite dangerous. Health and Safety governing such occasions simply doesn’t exist here in Majorca, so you must cast caution to the wind and take your life in your own hands when you attend these fiery fiestas.

I remember during that first experience when it appeared the town hall had been set alight. Of course it was all cleverly done with smoke and mirrors, but there were also a lot of flames, and by that time of the evening when the party was in full swing no-one really seemed to care whether the town hall was actually on fire or not!

However, here in Mancor de la Vall we don’t get a whiff of St Antoni’s burning guilt until the weekend of 18/19 when the event kicks of with a very different star of the show in the shape of ‘Jeroni’ a trained crow who, as annual tradition dictates, swoops down from the church bell tower, symbolically delivering a piece of bread to Saints Antoni and Pau, a curious custom showcased in Mancor de la Vall since the middle of the 20th century.
Sant Antoni is considered by many to be the most popular Saint in Majorca, if not the entire Balearic archipelago. But who was this sainted man? As with the origins of many historical figures immortalized within the colourful tapestry of tradition, the relevant facts surrounding Saint Antoni are often romantically embellished behind that same wonderful illusion of smoke and mirrors. But the truth remains, that without doubt, Saint Antoni did exist, and the footprint of his recorded life is stamped on the annual fiestas that dominate the island throughout the month of January, even though our Tony apparently never set one saintly sandal on these island shores!

Born in the year 251 AD in Koman, Upper Egypt, it was not until the year 272 AD that Antoni committed his life to God, seeking sanctity in the solitude of the vast, Libyan desert to contemplate his faith. It is commonly reported that visions of sexual seduction, driven by the Devil himself disguised as a Jezebel, distracted young Anthony who aborted such temptations by walking across burning coals. Ouch! I suppose he could have just slapped himself across the ankles with a wet flannel, but then we wouldn’t have the Fires of Abstinence to celebrate.

Sant Antoni is often shown with a small piglet at his heels, giving credence to the legend that he was also blessed with the gift of miraculous healing as he once restored a blind piglet’s sight, earning his honoured reputation as Patron Saint to Animals.

This sublime act of faith is also remembered and celebrated each year at the ‘Beneides’ animal blessings) demonstrated across the island during the Saint Antoni festivities. These traditional blessings really are a heart-warming event, with animals and pets (albeit those not permanently chained up) ceremoniously paraded past local churches to receive benediction from a priest. 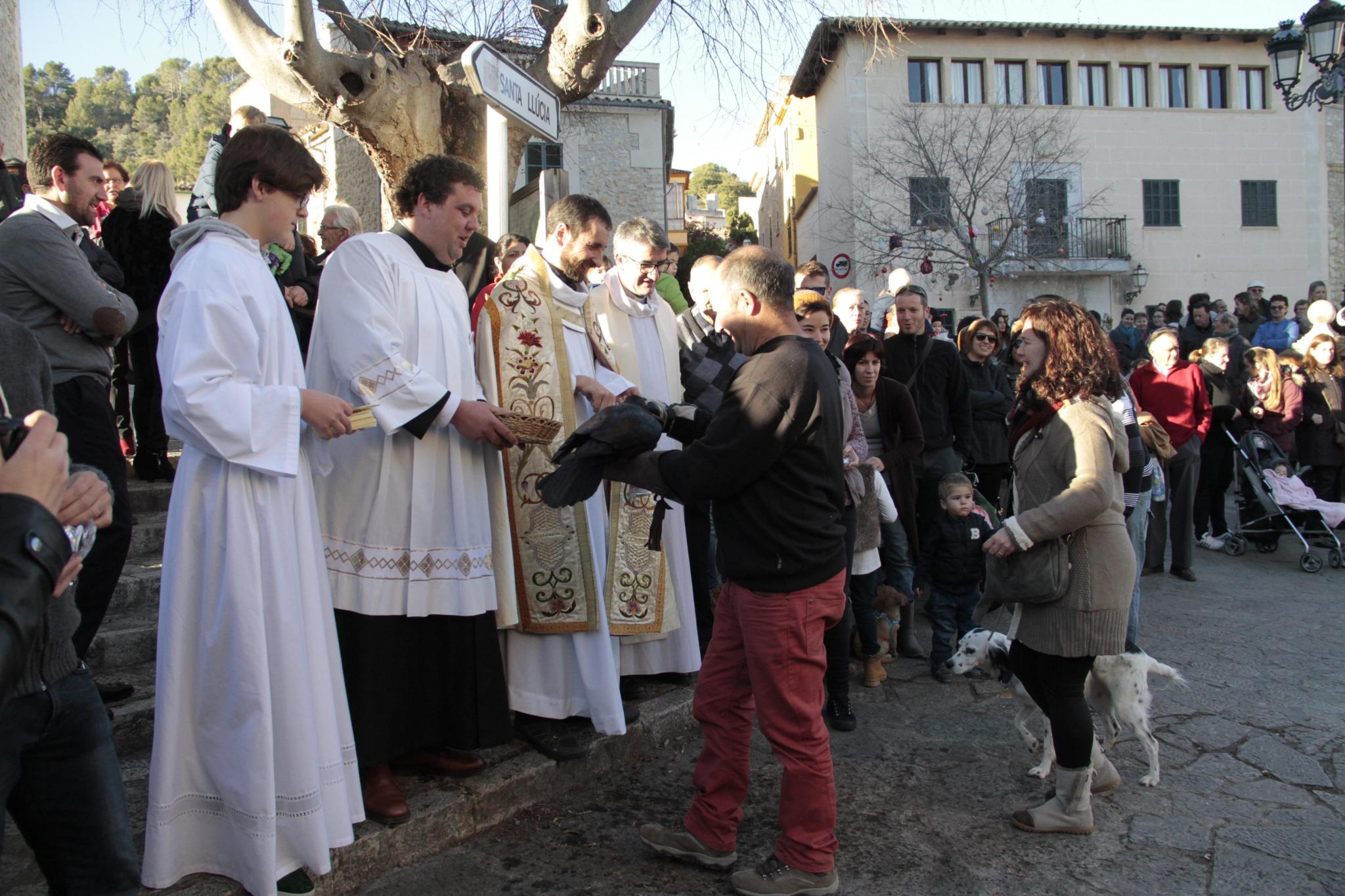 It’s the sweetest, touching and most intimate tradition, often involving a pageant of cheery floats. There are usually a few cute pink piglets in prams that not only receive huge ooohh’s and aaahh’s from the crowds, but connect the pig reference back to Saint Antoni.
I remember some years ago, we visited a ‘Beneides’ parade in Muro. There were rows of chairs laid out, very close to the road, lining the route. We took seats in a prime position with our feet nestling gingerly on the curbside. When we saw more elevated seats positioned a little further back we though that option might be better, offering a more panoramic view.

Once comfortably seated, the parade of animals began. As Muro is rich in bullfighting history and indeed still presents a working bullring, the parade was planned to conclude with a few young bulls passing by. I imagined a couple of cute calves would go trotting by. Wrong! About twenty juvenile bulls (which looked full size to me) came charging down the road, thundering past only inches from the feet of those seated roadside. I think we had a lucky escape by changing seats. And although no-one was injured, it became a bit of a panic situation with knees being swiftly drawn to chests. We laugh about it now, but the organization of such was a bit reckless to say the least. But hey ho! This is Majorca where anything goes.

A few centuries ago, the crops in Sa Pobla were decimated by a poisonous fungus. Parishioners remembered the stories of Saint Antoni and the reference to his use of fire to overcome demons and devils. With a heritage steeped so richly in superstition, the islanders believed that evil spirits were responsible for the destruction of their crops and inspired by St Antoni, lit bonfires to drive those demons away.

Thus, Saint Antoni (in mind and spirit only) came to the Island, where the traditional bonfires or ‘foguerons’, continue to this day as part of the theatrical celebrations honouring Majorca’s most popular saint.

Saint Antoni reportedly died in 356 AD at the ripe old age of 105. Not bad for someone whose main diet was supposedly bread and water. Had he actually come to Majorca I’m sure he would have tried a ‘pa amb oli’or two and probably thrived to a staggering 200!
So now you know. And as you dance and keep warm around your own Fires of Abstinence, enjoying the celebrations of Saint Antoni, you will at least have a reasonably good idea as to whom you are raising your cheering glass to. Happy Fiesta!