A late January foggy Sunday morning in the car park of the Manacor branch of Aldi is somewhere I would heartily recommend. There are two compelling reasons to be there at that time. Firstly, and to my great relief, the shop is closed, so shopping is not required. And secondly, the car park is normally empty on a Sunday. More importantly, the Classic Car Club met there for the start of the 21st edition of the now almost world famous annual Almond Blossom Rally. Jean Pierre Allemann has organised every single one of these events. It has been going for longer than most people have been members of the club! And once again he excelled. 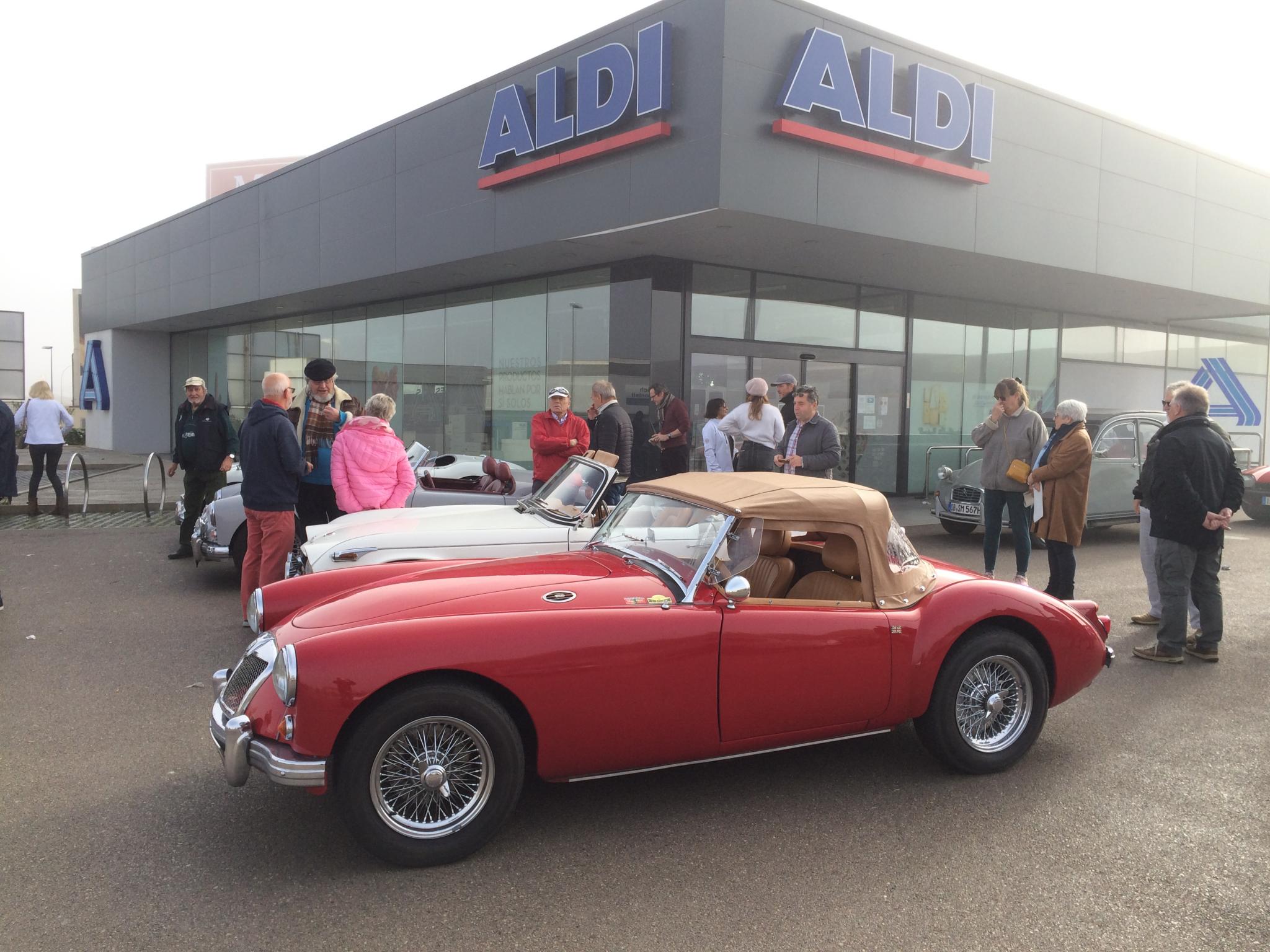 One of his secret ingredients to a really special rally is the route and the roads. Here he’s master of his region and being an Austin Healey driver knows just the kind of roads which are fun to drive. Interesting, pretty and winding enough to be engaging without being hard work. Another important element is Almond Blossom which although not as prolific as some years, was all over the place.

Around 20 classics started the first Classic Car Club rally of the year by circumnavigating Manacor and headed towards Arta guided by tulip directions. En route there was one clue which could only be seen by stopping and leaving the car in one of the most picturesque villages on the island, Son Negre. 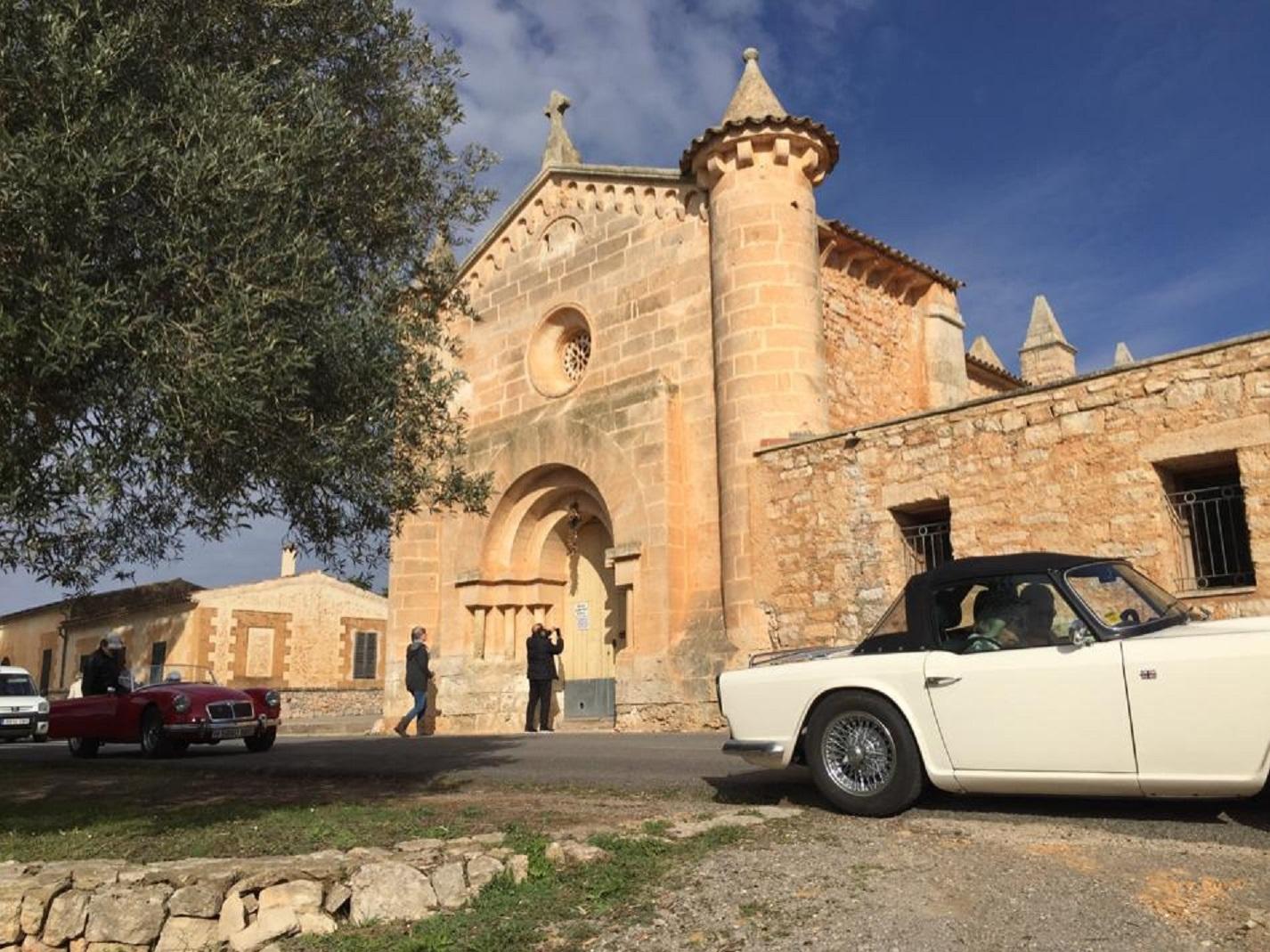 Fortunately there was ample parking opposite the church where the service timings provided the answer. After that, the challenge was to follow the instructions. Even though they were very thorough, that was not always easy. Luckily Jean Pierre helped us out with a couple of photos where the choice of road was rather more complicated than usual. 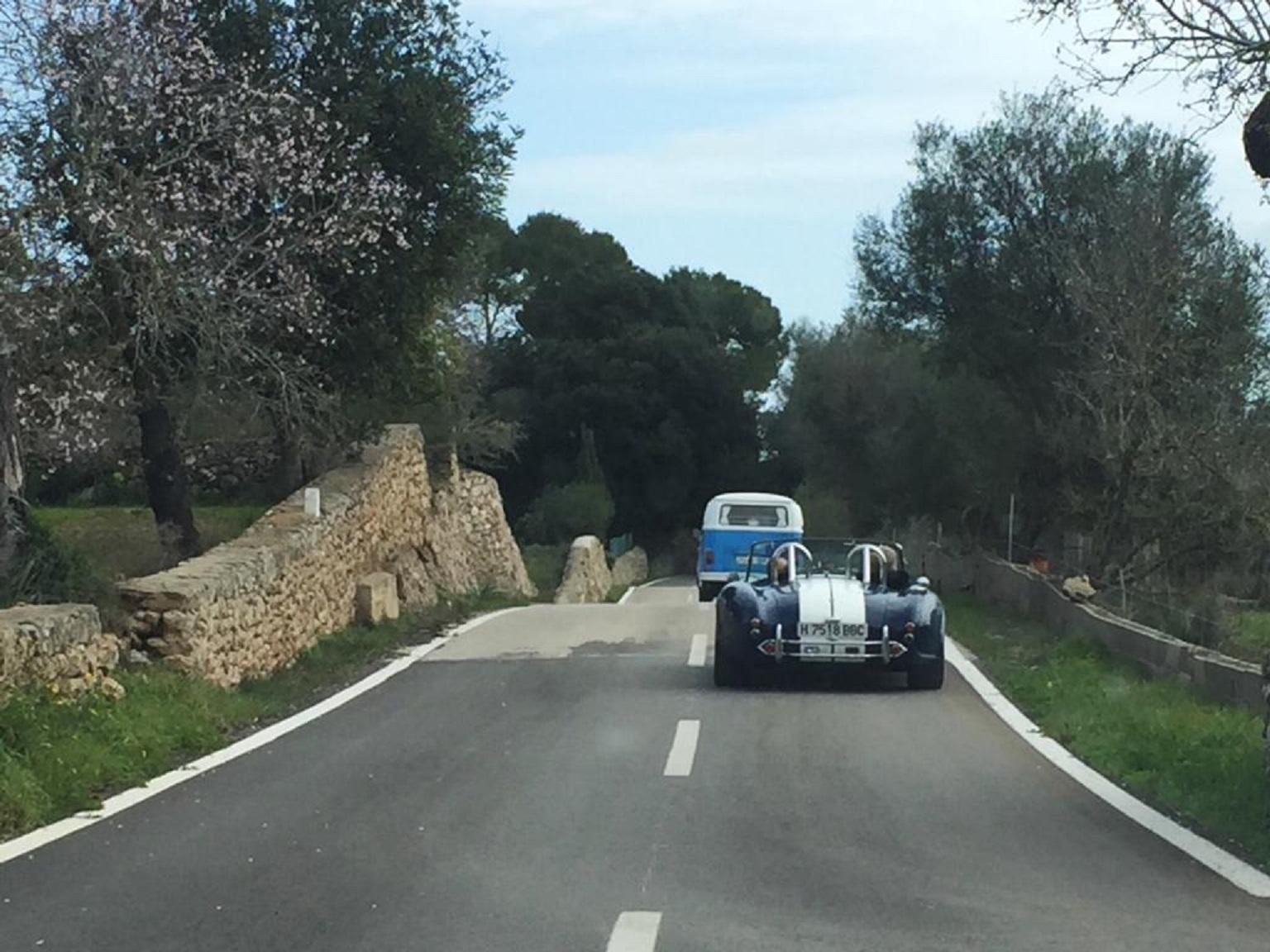 Other than not getting lost, more of that later, the overall objective was to track down bags of small coloured stickers in four locations along the way. One’s choice of colour and collecting all four determined the winners. Of course several of us did get lost. But a few extra minutes driving along the wrong road wondering why the next turning seemed to be taking a long time to come up was a minor hiccup. A quick backtrack sorted that problem.
To add a touch of spice we passed through the notorious town of San Lorenc de Cardassar. The town itself is not that spicy but a villa in the surrounding countryside is the home of the TV reality show ‘Love Island’. If watching young nubile couples coupling and struggling with words of more than one syllable rings your bell then I suggest you tune in sometime. 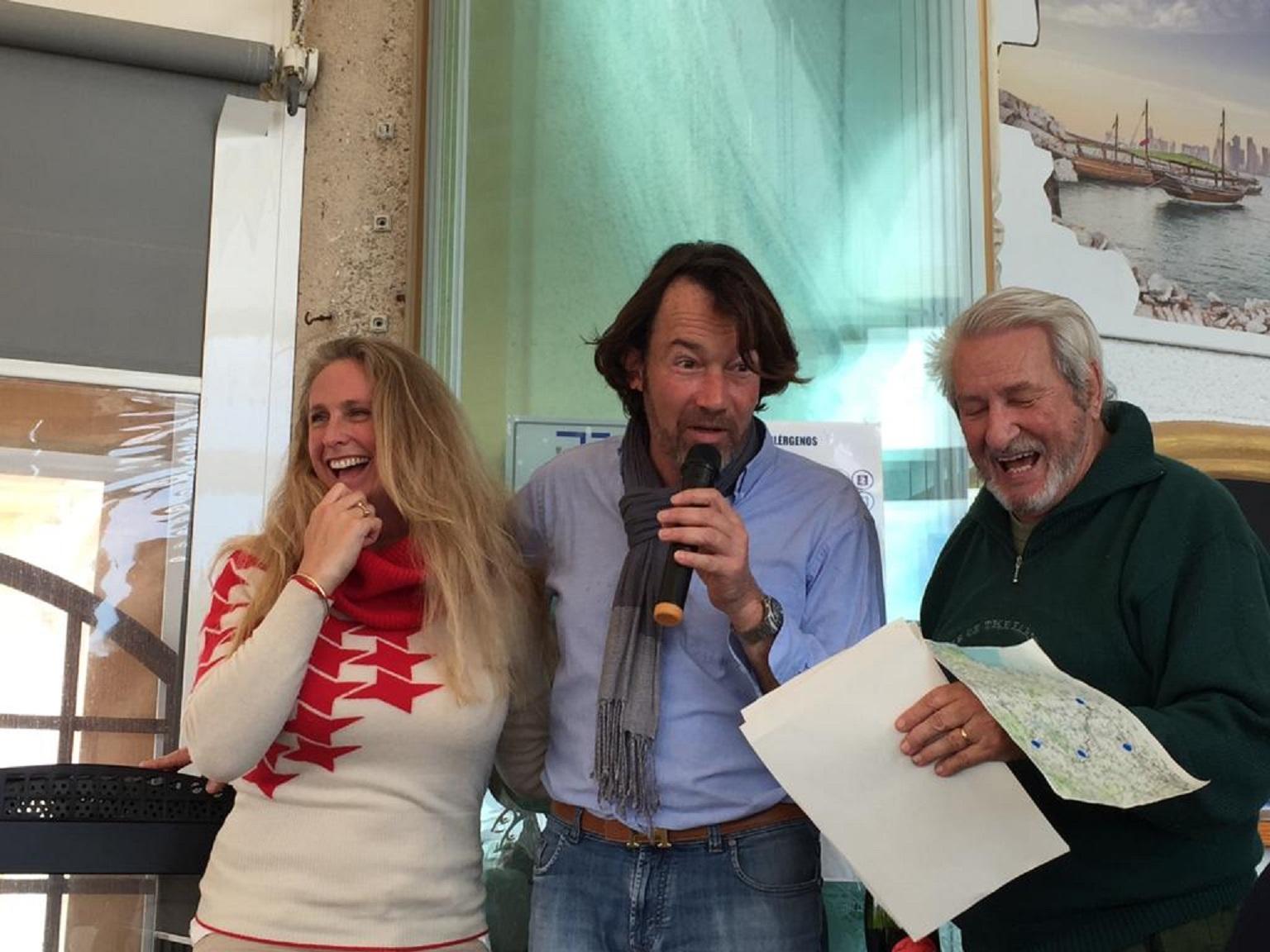 After a superb drive and with only a few minor navigational mishaps, all made it to the finish in Cala Ratjada. Where lunch awaited at the centrally located harbour side restaurant La Trattoria. After Storm Gloria the previous weekend, the weather gods smiled upon us and provided a perfect day followed by the traditional prize giving.

3rd place went to Nick Scantlebury with navigator Jim Bell in Nick’s Chevy Nova. 2nd were Paddy and Ann Pigden in their Alfa Spyder and the winners were James Bonnardel with navigator Melanie Harcourt in his Mercedes 500SL with four blue stickers. James only joined the club shortly before the event so they were winners straight out of the box. A force to be to be reckoned with in future perhaps. 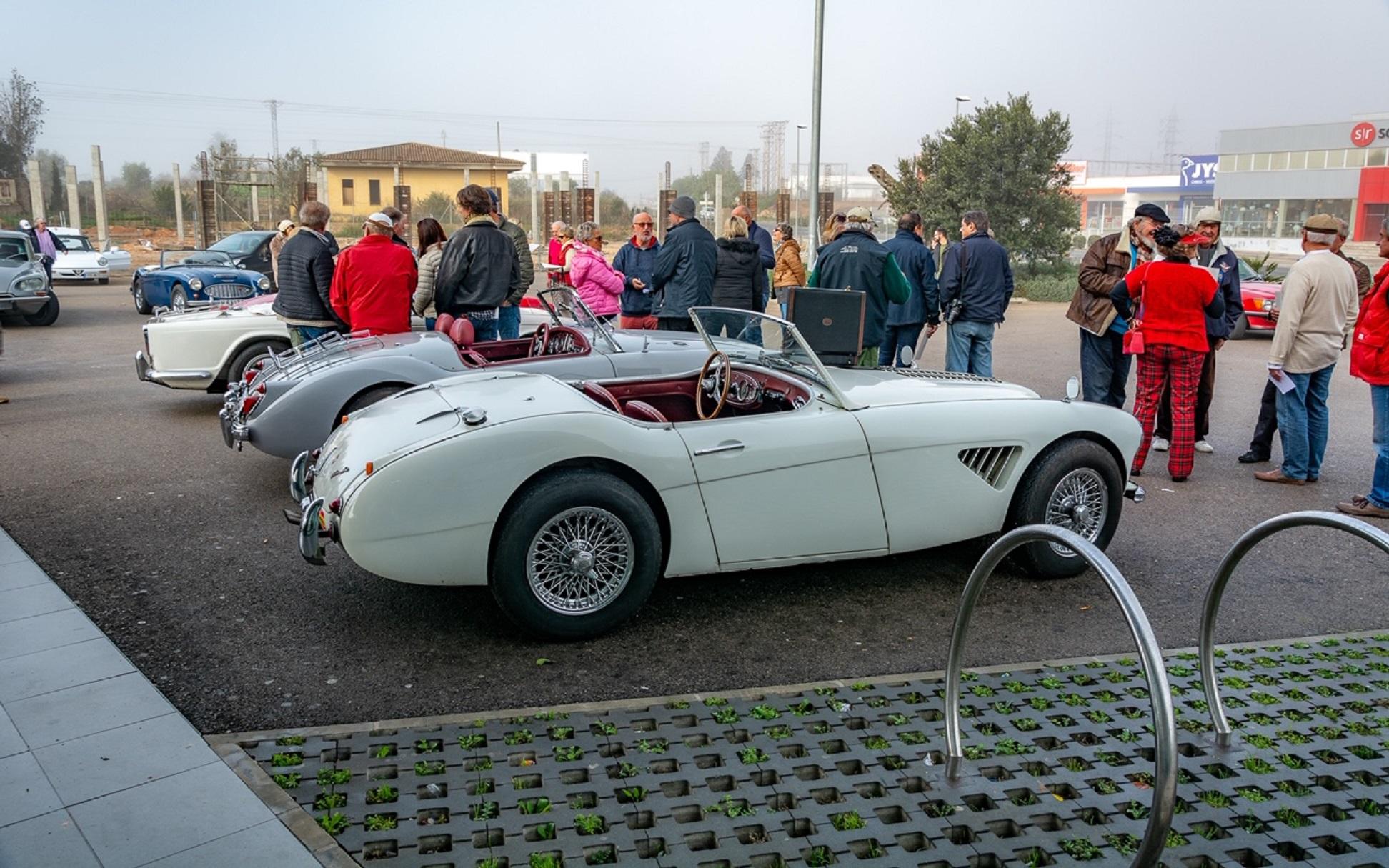 Our thanks to Jean Pierre for a memorable day. See you next week.