Nan's Day Out - To London

Today I am responding to kind readers who have asked me for ideas for a trip to London. My Nan’s Days Out take place in all sorts of sites from Majorca to Cornwall to London. London is the one many want to know about apart from the huge interest in our adventures round Majorca. London creates some interest because I do not return as a tourist. This was my home City before relocating to Soller. Many readers go there for work, shopping, theatre and all the usual reasons and they find their way round to where they need to be. Their question to me is what would you do if you had a full day in London with no plans and a teenager as company? This is the story of my life so I could actually write a book on the trips I would take.

Last Sunday I was in London in the drizzle and biting wind heading for the river. The Thames in all its glory is like the backdrop to my life. I lived in North London but headed to the river for work. The Times Newspaper in its old location of Printing House Square was my destination. The City of London held many clients and in those days I knew the square mile like my playground. In later Magisterial Years the Court at Horseferry Road was my centre and the river was my lunchtime walk. 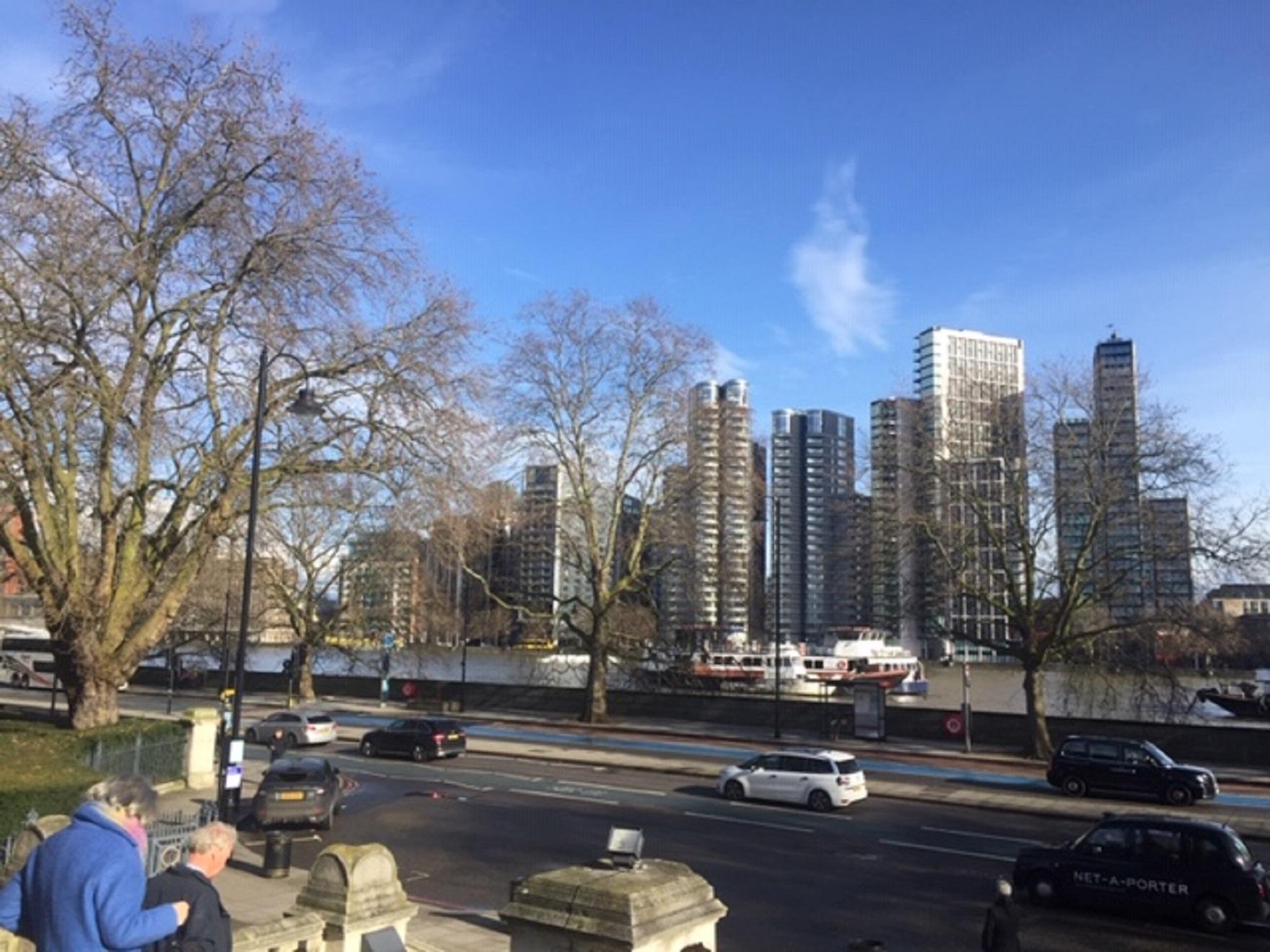 I was heading for Tate Britain on my wet Sunday and to view the Steve McQueen Exhibition. This is the Turner Prize-winning artist and Oscar-winning filmmaker Steve McQueen who unveiled his epic portrait of London’s Year 3 pupils.

‘Explored through the vehicle of the traditional school class photograph, this vast new art work is one of the most ambitious portraits of children ever undertaken in the UK. It offers us a glimpse of the capital’s future, a hopeful portrait of a generation to come.
Steve McQueen invited every Year 3 pupil in London to have their photograph taken by a team of specially trained Tate photographers. They included children from state primaries, independent schools, faith schools, special schools, pupil referral units and home-educated pupils.

These class photos are brought together into a single large-scale installation, capturing tens of thousands of Year 3 pupils in a milestone year in their development. The children are all between 7 and 8 years of age.’ 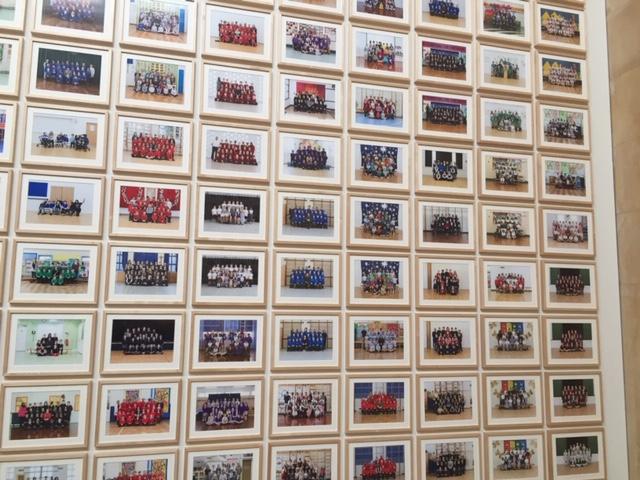 While we were there family groups arrived with children very anxious to see themselves on the walls of this vast space. This exhibition was a multi faceted idea and one consequence is introducing thousands of families to the Gallery. The children come to visit with their school groups and also with their families and friends. I can’t think of a bigger way to introduce so many to the world of exhibitions and galleries. I enjoyed the feeling that a snapshot of a generation of London 7 year olds were captured in that place. A great historical archive for the future about the way we were when photographed in 2019.
Tate Britain is a gallery of many parts and hours could be spent there if that is your mind set. For me I just like to dip in and see something specific before moving on. The great thing about London galleries is that they are free (although they do encourage donations). This means that an hour here and there when passing is all possible and my way of doing galleries.

Next stop was only steps from the entrance of the Tate. The sun had come out and the London river scene was looking spectacular. Just right for a river cruise - Tate to Tate style…

The Tate to Tate boat seats 220 people and is a state-of-the-art (no pun intended!) catamaran with interior and extrior designed byDamien Hirst. 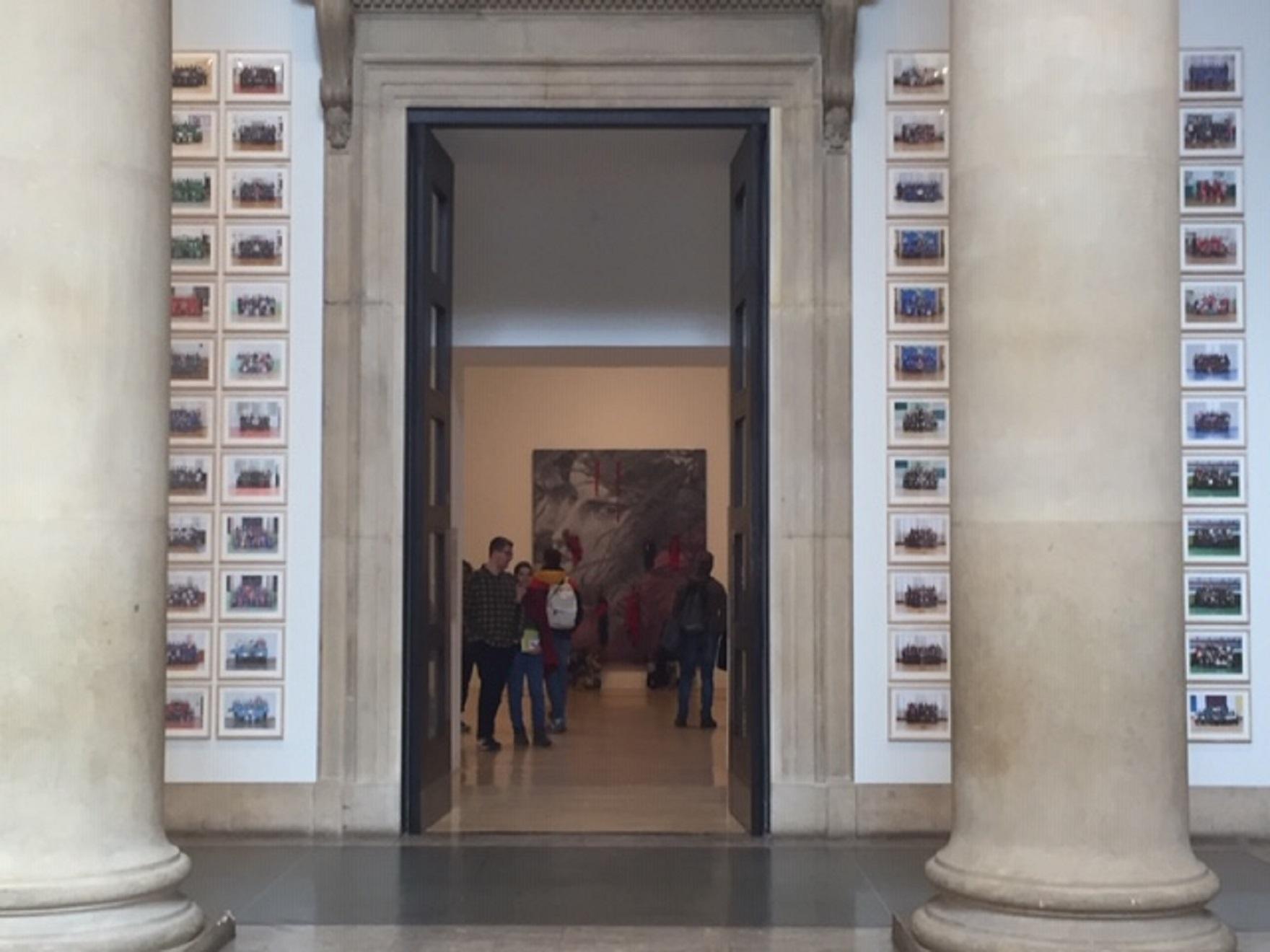 Check out the river service, connecting Tate Britain to Tate Modern. It runs every day, including weekends, linking the new Millbank Millennium Pier and Bankside.

As well as providing a fast and relaxing cruise between the Galleries for culture vultures, it’s also a brilliant fume-free way to get between Westminster and the City.

The service also calls at Waterloo pier, near the London Eye and the Saatchi Gallery, so London has a new, direct river link to 3 major art galleries in London. 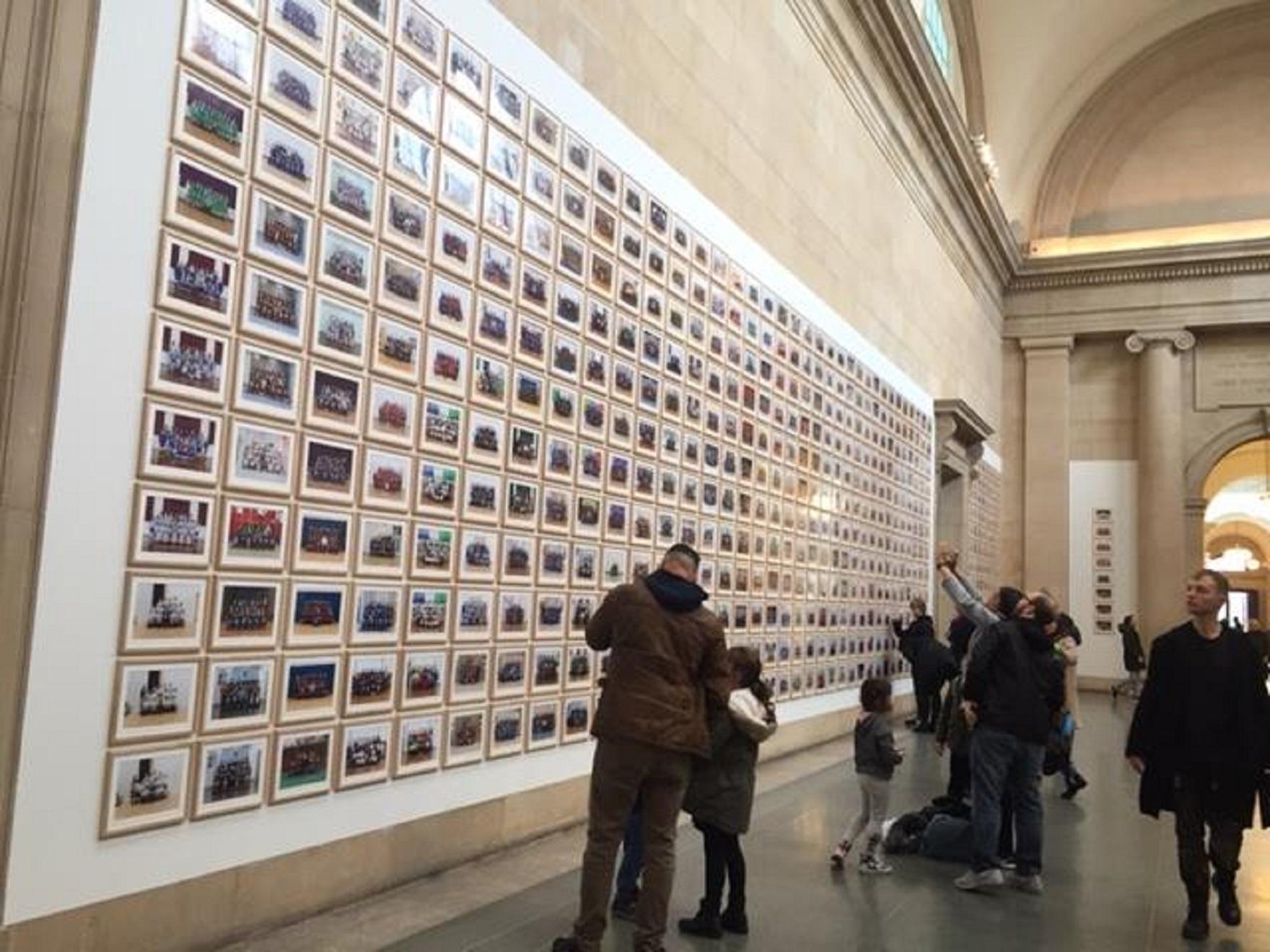 The Tate to Tate boat seats 220 people and is a state-of-the-art (no pun intended!) catamaran - with interior and exterior designed by Damien Hirst! With the first boat leaving Bankside at 10 in the morning, and the last boat leaving Millbank at 5 in the afternoon, it’s not really an option for your early-morning and evening commutes, but with boats every 40 minutes, it’s a hassle-free and pretty cheap way to cross London, not to mention a fantastic option for travel in the summer. You can even use your travel card for a discount. You can buy tickets from Tate Modern and Tate Britain. Tickets are valid all day, with a maximum of 3 return journeys. You can take your bicycle on board (at the Captain’s discretion), and there’s full access for people with disabilities. 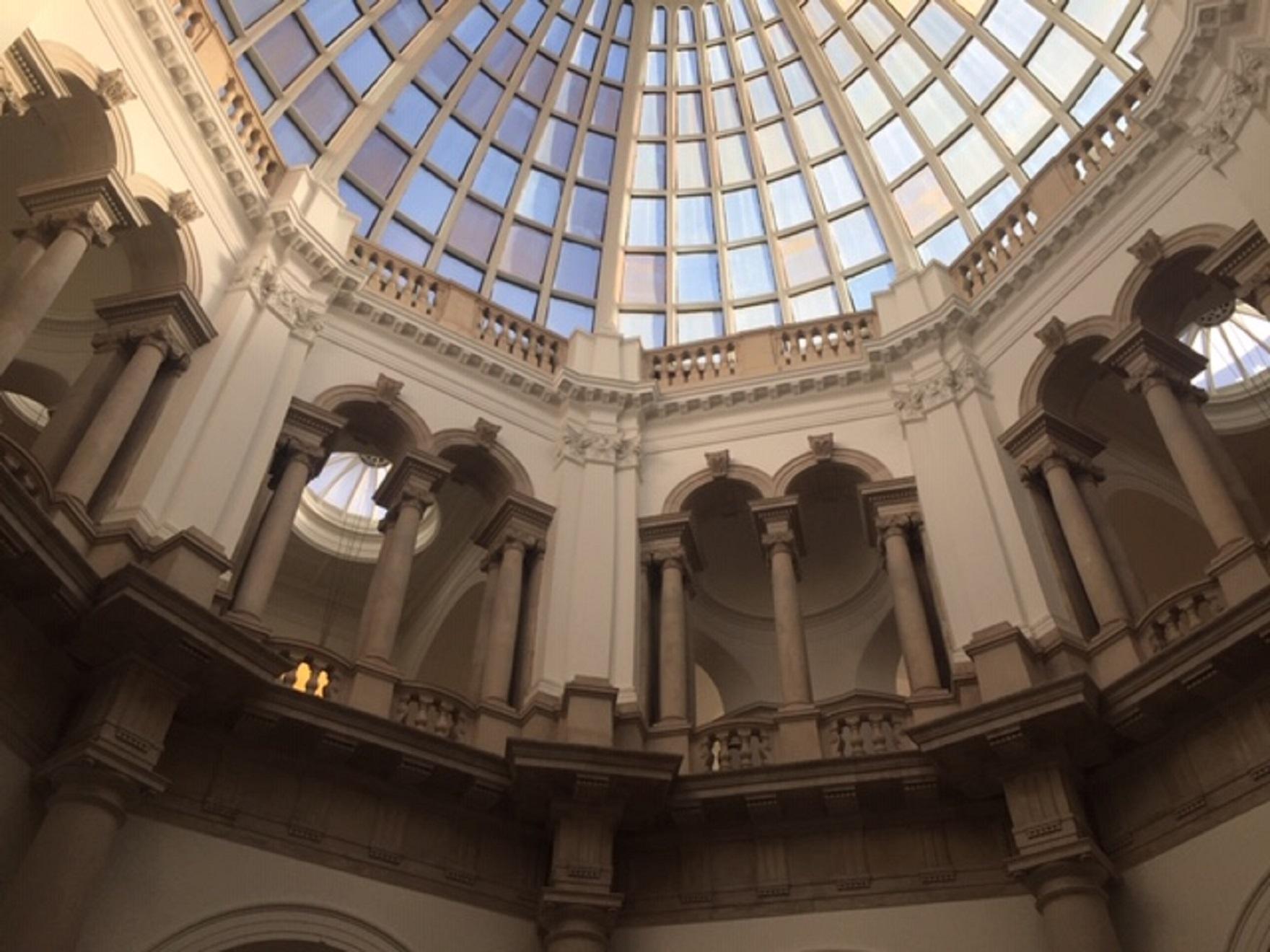 This was a great journey across the water to Tate Modern to have another thirty minutes of culture and a walk by the water. A great fun journey and just so easy to do – door to door culture by catamaran. The delight for a granddaughter studying journalism was to see the work of Dora Maar. ‘During the 1930s, Dora Maar’s provocative photomontages became celebrated icons of surrealism. Her eye for the unusual also translated to her commercial photography, including fashion and advertising, as well as to her social documentary projects. In Europe’s increasingly fraught political climate, Maar signed her name to numerous left-wing manifestos – a radical gesture for a woman at that time.
Her relationship with Pablo Picasso had a profound effect on both their careers. She documented the creation of his most political work, Guernica 1937. He painted her many times, including Weeping Woman 1937. Together they made a series of portraits combining experimental photographic and printmaking techniques.

In middle and later life Maar withdrew from photography. She concentrated on painting and found stimulation and solace in poetry, religion, and philosophy, returning to her darkroom only in her seventies.’

There were people in this gallery taking far more time over each photograph than us. We were in a Sunday afternoon glimpse mood but others could have been preparing for a thesis. Tea and cake and chats about having seen Guernica in Madrid came next and then it was time to move.

I was heading by bus to Tufnell Park and Lucia the train from Victoria back to University in Brighton. We had a lovely day of chat and things to see and now it was au revoir until a day or so later I joined her in Brighton before flying home.

This Nan gets around and from whizzing across the Thames to the bracing seafront of Brighton the pleasure was all mine.

Thanks to the websites of Tate Britain and Tate Modern for full info on exhibitions.