Get to know your cuts of fresh pork

Winter is the time of year when the pig is very much on the minds of all those Majorcan families who have one (or several) and during the cold months turn it into sobrasada, black or white puddings and other kinds of charcuterie.

Majorcan pork is such a good buy that it is never far from the cook’s or housewife’s thoughts throughout the year because for many people it is their favourite meat.
Modern technology has been applied to the breeding of pigs and nowadays the leaner cuts of pork are no higher in fat (or cholesterol) than other meats such as beef.

In recent years there have been a series of TV and press campaigns to get people to eat more pork by selling it as the new white meat. And if you take a look at some of the leaner cuts of pork you will immediately see it is, indeed, very white.

Pork used to be out of bounds for those who had to lose some weight — but not any more. It is very much on the menu if it has been cooked with a minimum of fat and is not eaten with veggies that have soaked up a lot of fat or oil. But that also applies to any other kind of protein, be it meat or fish.

At the market there are three basic categories of quality in pork meat. At the top of the list is ‘extra’, followed by ‘primera’ (first) and ‘segunda’ (second). 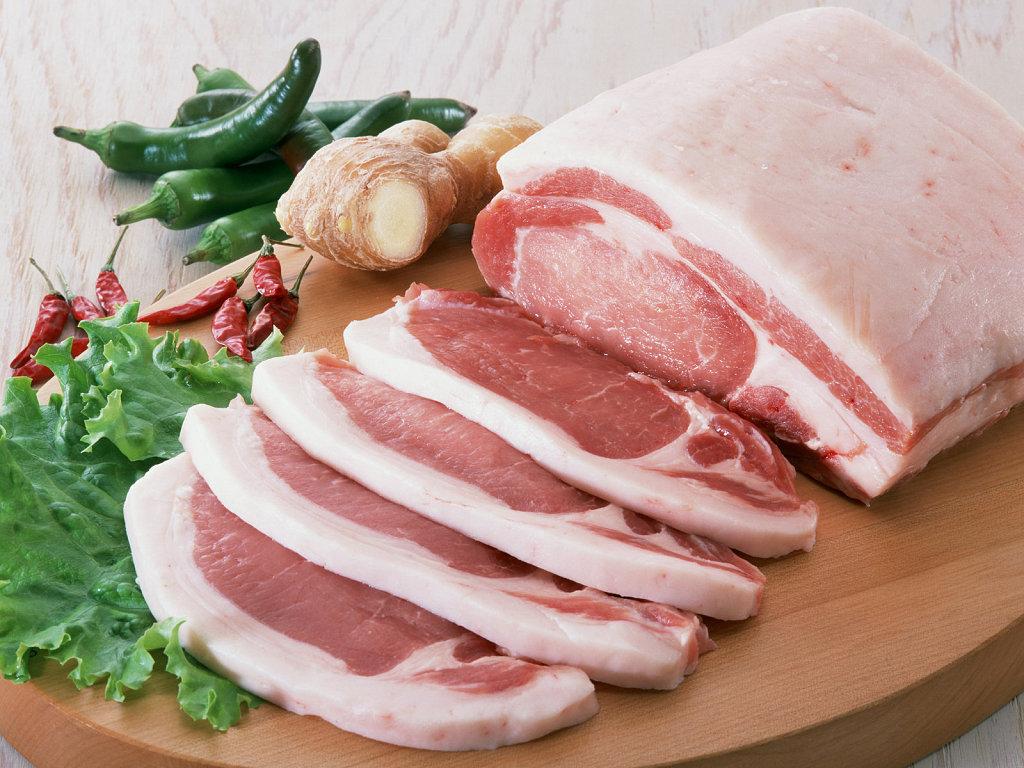 Two cuts classified as ‘extra’ are the fillet (solomillo) and the tenderloin (lomo). ‘Primera’ takes in ‘carne magra’ (literally, lean meat) which is taken from the leg and also includes the best chops.

‘Segunda’ is also ‘carne magra’, but taken from the shoulder and it includes the chops at the neck end.

‘Carne magra’ from the leg is sometimes sold as thin slices that housewives coat in breadcrumbs before frying them. These slices are called ‘filetes’ in Spanish, but they have nothing to do with fillets as we know them.

Some housewives get the butcher to tie up a chunk of leg meat with string which they roast with potatoes and other veggies. But a piece of leg meat for roasting can be so large it doesn’t need tying with string.

Boned shoulder of pork can also be successfully roasted although there isn’t a great deal of fresh shoulder on sale because most of it goes to the charcuterie industry. The shoulder has more internal streaks of fat which makes it juicier and tastier — but at a cost of more calories and cholesterol.

‘Solomillos’ (what we call fillets) are plentiful but are on the smallish side and sometimes one is enough for only two people. The meat is extremely tender and if roasted or pan-fried with just a hint of pink in the centre, it will be juicy and full of flavour.

Lomo (tenderloin) is the boned side of the best chops and it can be bought fresh or marinated. Spaniards also like to breadcrumb slices of lomo before frying them for a quick and simple meal.

This cut is also a favourite for making sandwiches and rolls and in bars you will see ‘bocadillos de lomo’ on sale. When tender and juicy (that is, not overcooked and dry) lomo makes a very nice sandwich.

The chops known as ‘chuletas’ come from the unboned tenderloin cut end are much more expensive than ‘costillas’, which are taken from the neck end. 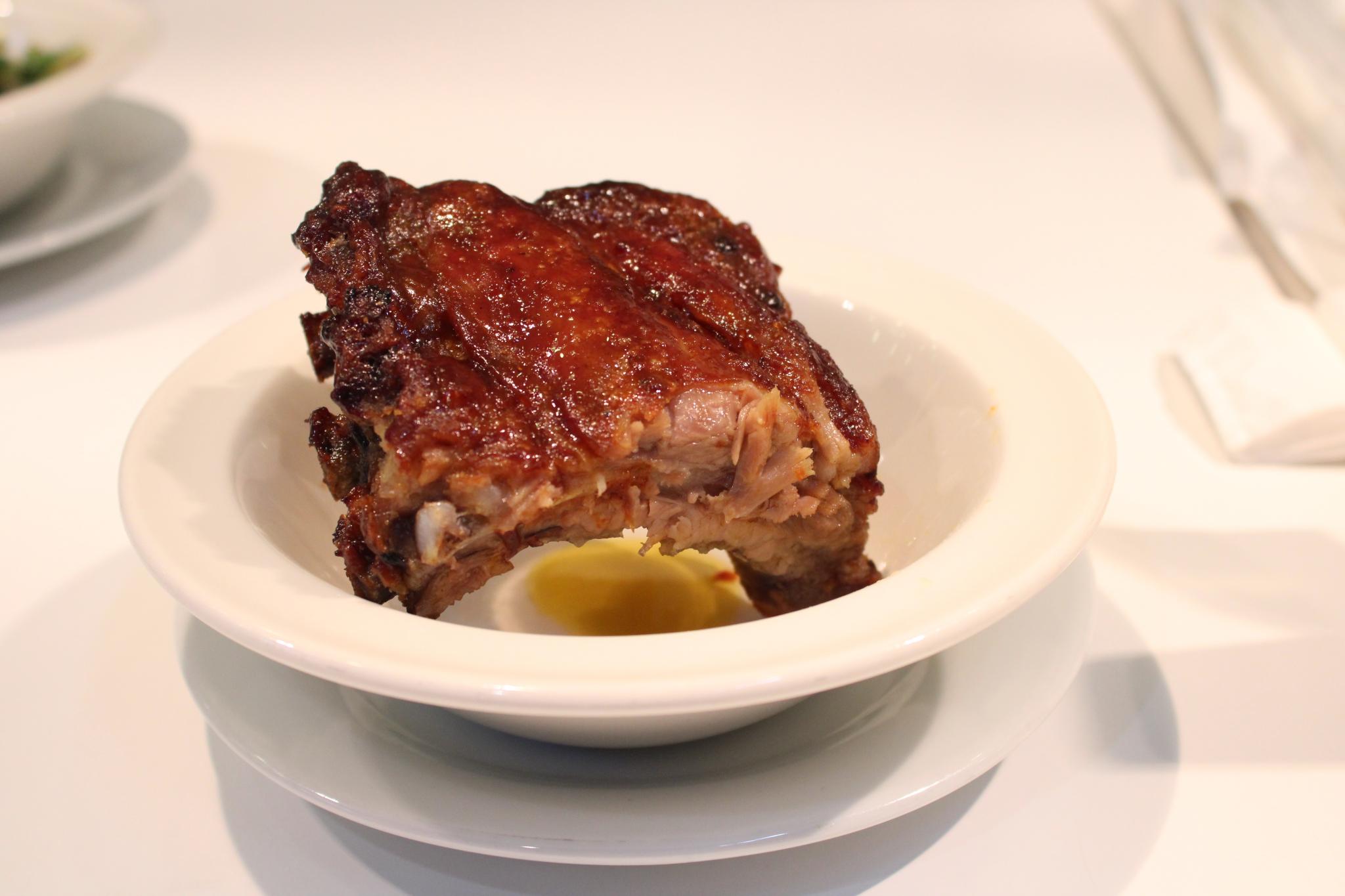 Spanish housewives like to buy a whole piece of chuletas which they roast and then slice up into chops. Meat roasted on the bone always has more flavour.

Housewives of the old school who keep a wary eye on the weekly food budget, buy a piece of chuletas and then bone out the lomo themselves, using the bones to make stock. That works out cheaper than buying the boneless lomo.

As tenderloin on the bone is such a big cut, boning it is easy if you have a small sharp knife. When boning anything, the basic rule to remember is to stay close to the bone. If you follow the bone in short firm movements you can’t go wrong.

When using a knife in the kitchen, all movements should be away from the body, never towards it. That way you avoid cutting yourself. If the knife is going to slip, better that it cuts into the chopping board than into our hands or arms.

At butcher stalls you will often see pork trimmings for sale at a most reasonable price. They are a good buy and can be used for stews or pie fillings.

All cuts of pork are very good at absorbing flavours from a wide variety of herbs, spices and other condiments. The mere addition of salt transforms the taste in a surprising and splendid way. You can either rub salt into the meat and leave it overnight, or let it soak in a saline solution for 12 hours.

For the saline solution, dissolve 30grs of sea salt in a litre of water and you will have the exact salinity of sea water. This will give you new taste sensations, but you will get even more complex flavours by boiling the water and adding bay leaves, juniper berries, and any other herbs or spices you fancy. The saline solution should be cold when you add the pork cuts.

The salt treatment needn’t be confined to large cuts of pork. It works just as well with a few chops or even slices from the leg or shoulder. Pork treated this way can be cooked by any of the popular methods.

Simple combinations of spices, herbs or mustards can be spread on pork before cooking it. This is mainly for barbecues, ovens roasts and grilled or fried cuts.

You could combine the mustard of your choice with coarsely crushed black peppercorns and some finely chopped garlic. Spread this mixture on the pork at least 12 hours before cooking it.

A herb mixture that works well is thyme, sage leaves, dry mustard and ground black pepper. Quantities are a question of personal taste, but you should always be aiming for balance and harmony.

Pork and fruit get on like kissing cousins and it’s a good idea to bring them together on a regular basis, especially in the winter when they produce succulent and comforting stews and casseroles for cold blustery days.

This meat will accept dried fruit as happily as fresh ones. Fresh fruit with an intense acidic background are especially suitable. Try pineapple chunks (never from a tin), tart apples such as Granny Smith, or oranges and clementines that aren’t too sweet. Grapefruit works beautifully.

When using fresh fruit of any kind, it must not be added until the last half hour of cooking time. Fresh fruit that is mixed in too early will end up overcooked and mushy and will lose most of it own flavour. The fruit should just be cooked through so that it retains its natural taste.

Dried fruits should be cooked for longer but even they must not be simmered for as long as the meat. They must also keep much of their natural consistency and flavour. Dried fruits with a special affinity for pork are prunes, apricots, figs and dates, but others I have tried have always enhanced pork stews and casseroles.

Among the cuts of pork not included in the categories mentioned at the beginning are the cheeks of the pig — but they are excellent and you should be looking out for them and trying them in stews and casseroles.

The cheeks of both animals make for beautiful eating, so tender and succulent, yet I don’t know anyone who eats them at home, even occasionally. Most people don’t pay them the slightest attention.

But professional cooks took them up and suddenly cheeks were getting the Michelin star treatment. That meant being flambéed in brandy and then simmered in red wine and port with the addition of truffle juice or diced foie gras for extra layers of rich aromas and flavours.

You will also get splendid results if you sauté them in a suitable saucepan over a highish heat with finely chopped onions, leeks and carrots, and adding flavourings of your choice. Some Michelin cooks would add vanilla and sage.

When the cheeks are well seared and the vegetables have wilted and taken on a bit of colour, deglaze the saucepan with brandy, flambé it and cover the cheeks with red wine, which could be one of the young Ribera del Duero reds that cost just over €2 at Mercadona and Eroski. As pork cheeks cost around €8 a kilo, this dish is an economical one.

Always bear in mind that cheeks call for gentle simmering and only for long enough to make them tender and juicy. An hour should do it. Overcooking must be avoided or the meat will become stringy and unappetising.

One of the attractive characteristics of cheeks is that they contain a considerable amount of gelatin — and that gives them their rich succulence. But if they are boiled briskly instead of being simmered, and for too long, then the gelatin melts and seeps out into the sauce. The meat then becomes stringy and tasteless.

I cook cheeks on an electric ring. When the wine comes to the boil I let the mixture simmer for five minutes and then turn off the ring. For the next 10 minutes the cheeks cook slowly in the residual heat.

I then bring the contents of the saucepan back to simmering point and leave them for another five minutes, repeating the process until the cheeks are tender.

Cheeks are also superb when done in a tomato sauce and served with any kind of pasta. Get a kilo of cheeks which you can cook whole or cut into bite-size pieces. In a suitable saucepan heat six tablespoons of olive oil until hot and sear the meat over a high heat until golden. Transfer to a plate.

Slowly simmer a kilo of finely chopped onions in the same oil for about 50 minutes, stirring frequently. Then stir in a kilo of peeled and finely chopped fresh tomatoes and simmer for 10 minutes before adding the contents of a small tin of concentrated tomato purée. Finally stir in the cheeks and simmer until they are tender. If the sauce is too thick, thin it with a little milk.

In ring the changes in this meaty pasta sauce by varying the herbs and spices every time I make it. A few whole cloves always give it a distinct taste and so does a small amount of ground ginger. I choose my herbs from parsley, thyme, oregano, bay leaves, sage, fresh basil and rosemary.

When making a sauce like this it’s always a good idea to do a large amount and freeze it in suitable portions for future impromptu meals.