The winter is one of hard work for people like me. Media stuff with Facebook, Instagram and websites occupy us in the months when companies have time to talk. As soon as April 1 dawns they don’t want to see us till November. In this context I was sent to research two different gardens for a book a client was producing. Visit, write a story and take some pictures were the instructions. The key was that one had to be in London and one in Palma. The criteria were that they both should be old gardens with years of history. I do get some interesting briefs and his was my mission for February 2020.

London town called and the first garden was a trip down memory lane. As a child I lived in North London on the edge of Parliament Hill Fields. At an exit to the fields stands Gospel Oak station which linked leafy Richmond to Broad Street in those days. In 2020, with Broad Street demolished, it makes its way to the City and Stratford. I knew the station well as it was my daily route from home to Highbury where I went to school. It was also a special outing station because a twenty-five-minute train ride took us (and still does) to Kew Gardens. This was my route on a cold blustery day in London. A really easy journey from memory lane and then out of the train and into Kew Gardens. A freezing Goddaughter took the place of the granddaughters and we went in search of orchids.

We followed Kew’s Instructions to ‘immerse ourselves in the tropics this winter by exploring the wonders of Indonesia in Kews 25th annual orchid festival.

Rainforests and volcanoes were brought to life inside the Princess of Wales Conservatory through an exotic array of vibrant orchid displays. Over 5,000 species of orchids can be found in Indonesia, alongside the staggering wildlife found nowhere else on earth.

Come see a celebration of the cultural and natural diversity that is scattered across the country’s archipelago of 17,504 islands, and the scientific discovery being made by Kew’s intrepid scientists.’ The conservatory in the modern greenhouse is a short walk away for the warmth of the Palm House. It still gave a delight to see the Bananas growing there and reminded me of being a kid and running round that place. Warm air coming from the heaters below and spray mist above you. The nearest we got to the tropics in those days.
Kew has developed over the years and has facilities like cafes and toilets plus buggy parks for prams. In my childhood there was no charge but now everyone is encouraged to pay an annual membership. It really is a delightful oasis with really long walks down to the river possible in its grounds. In the summer concerts and special events happen and many enjoy much of their leisure time here.

The Orchid Exhibition has just extended its run and can be seen until 15 March 2020. The formal gardens outside the Palm House and the amazing colours of Indonesia in the Orchid displays make it a delightful day out. Kew Gardens started its life as a Royal Palace in fact their info tells us that Kew Palace is the smallest of all the royal palaces. It was originally built as a fashionable mansion for wealthy London silk merchant, Samuel Fortrey in 1631.

George II (r 1727-60) and Queen Caroline were first attracted to little Kew, thinking it a perfect lodging for their three eldest daughters. After them, several generations of Georgian royalty used Kew and nearby Richmond Lodge as weekend retreats from an intensely public life in town.

Kew reflects the intimate personal and domestic life of Georgian kings and queens for much of the 18th century.

These days’ thousands walk its paths and discover vastness and the greenhouses. Kew is one of those places that is known as the lungs of London. A real pleasure to have visited again before my return journey on my own little train back to Gospel Oak.

A few days later, back in Majorca I had to complete the second part of my mission and visit the King’s Gardens of Marivent. I have, on occasions, been known to take a coffee and a paper and just sit awhile there because this is another oasis. On this day I was with friends who had never visited before so we all saw it through different eyes.

Marivent Palace was built in record time between 1923 and 1925 by the architect Guillem Forteza. It was personally commissioned by John Saridakis, who had amassed a large fortune as an engineer in Chilean mines and was in love with Majorca. He lived there until his death in 1963.

After his death, his widow, Anunciación Marconi, donated the palace to the provincial government of the Balearic Islands with the proviso that it would be turned into a public museum named after her husband and always dedicated to his collection. Her wishes were fulfilled for 10 years and then the provincial government decided to donate the spectacular estate overlooking Palma bay to the then Prince and Princess of Spain, Juan Carlos and Sofia, for their summer residence.

The Saridakis’ descendants took this decision to court.

In 1988, the Supreme Court ruled that the 1,300 works of art, the 2,000 volumes in the library and the hundred valuable pieces of furniture inside the Marivent Palace when the building was donated had to be returned to the legitimate heirs of John Saridakis. including the paintings by Sorolla, Rusiñol, Joaquím Mir, Picasso and many more.

2 May 2017, the Marivent gardens opened to the public free of charge during most of the year. The 9,000-square-metre gardens are well cared-for and delightful for a visit or an evening stroll.

Moreover, the Miró family donated 12 bronze sculptures by the artist Joan Miró for their permanent exhibition at this ‘cultural’ garden, which only closes when the palace is occupied by the Royal Family, usually at Easter and in the summer. 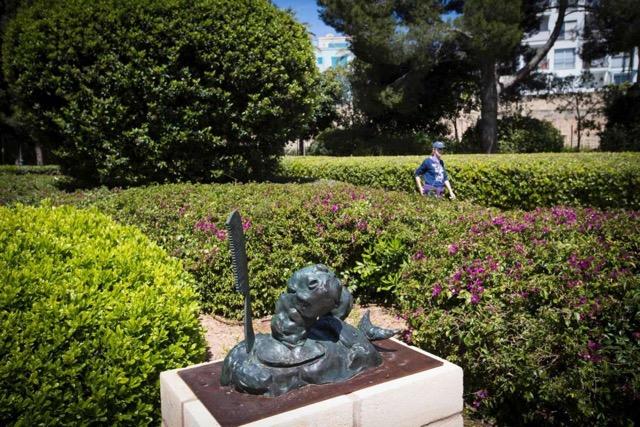 This free garden opening fulfilled a little of the Saridakis ambition to open the place to all. The Palace has yet to join the opening tours but the gardens are a beautiful first step. We wandered the gardens and unlike Kew, we were the only people there. A few gardeners tending the already perfect lawns and bushes and that was it. The big stone wall and entrance is off putting unless you are confident that you are allowed into this beautiful space. Just march on through, past the guard in his hut. Nothing to pay and beauty, gardens and sculptures all around. All thanks to Mr Saridakis…

I would recommend both these gardens to you for a trip. Great to be outdoors and enjoying the same space that our ancestors enjoyed and left for our pleasure.