Asparagus tips should be firmly closed: open ones are a sign of ageing and asparagus should always be as fresh as possible. | ARCHIVO

There was bad news last week for Spain’s asparagus lovers waiting for the new season of their favourite veggie — the harvesting is in slowdown because the coronavirus crisis has blocked the influx of seasonal workers who are essential for the successful picking of this delicate crop.

The covid-19 outbreak caused Spain to confine its population at home and to close borders to all travellers. That meant thousands of seasonal workers, mainly from East European countries, were unable to take part in this year’s harvesting — and asparagus farms all over the country have a huge manpower shortage.

Gourmets rate Spanish asparagus highly and everyone agrees the best crop is grown in Navarra. The other top areas are Extremadura, Andalusia and La Rioja, in that order.

Although there are dozens of varieties of asparagus you’ll find only two of them here. One is Aphilus, the thin green variety that grows wild in Majorca and is very popular with islanders. The other is the cultivated kind whose Latin name is Officinalis.

However, cultivated asparagus comes in different colours. There’s pure white, usually the most expensive. Another is mainly white with a violet tinge. The third is completely green with little shoots growing at the tips.

White asparagus never sees daylight during its growth, which is why it is white. It grows under rows of banked earth that are broken open only when the farmer calculates the asparagus is ready for harvesting. If the asparagus tips are allowed to break through the earth even for a short time, or if they do so accidentally, they take on a violet hue. This kind of asparagus should always be cheaper than the pure white variety.

As there is a big demand for green asparagus, growers allow the stalks to develop in daylight and they become dark green. This variety is usually cheaper than the white. The traditional growing season for English asparagus is May to June and in Spain it’s from April to July.

But many years ago, growers in Navarra managed to cultivate asparagus in winter by creating temperature and humidity conditions that fooled the asparagus into thinking spring had arrived. We now have asparagus all year round. But the real aficionados are always interested in the asparagus that is harvested outdoors between April and July.

One of the reasons white asparagus has always been classed as a luxury food is its method of cultivation: someone has to be constantly on hand to watch over those banks of earth to make sure the asparagus doesn’t break through.

Asparagus has to be harvested manually and that also adds to the cost. Once the asparagus has been lifted, machines can peel it, but no one has invented a mechanical way of harvesting it. It is simply too delicate to be reaped by a machine.

An even bigger problem facing the cultivator at harvest time is that asparagus doesn’t grow at a uniform rate. As the grower walks along the rows of banked earth, only he knows, thanks to telltale cracks in the soil, when the asparagus is ready for gathering.

Navarra produces about half of Spain’s crop and is considered to be the best. Always look at the label and buy those bunches from Navarra when possible. However, even more important than the label are the tips. They should be firmly closed: open ones are a sign of ageing and asparagus should always be as fresh as possible. You should also examine the stems, which should be firm and look as if they are heavy with juice. If they are at all woody or cracked buy them elsewhere.

Top quality asparagus is always graded (another cost that is passed on to the consumer) so it is of uniform length and thickness. If there is a big difference in the thickness of the stalks, it means someone hasn’t been doing his job properly, so you don’t know what other defects the bunch may have. It follows that you should avoid the ungraded varieties. They will be cheaper but they are a nuisance because they call for different cooking times.

If you are not cooking the asparagus as soon as you get home, lay it in cold water until you are ready to use it. If cooking it the next day, change the water a couple of times.

There are a few basic rules to be followed when doing asparagus and if you observe them you will have a successful dish every time. Having bought your asparagus according to the above guidelines, you must make every spear of the same length by levelling the stalks at the bottom.

Then, using a sharp vegetable knife, peel generously until you come to the tender skin near the tip. It is only by discarding the outer fibrous skin that the entire spear can be eaten. 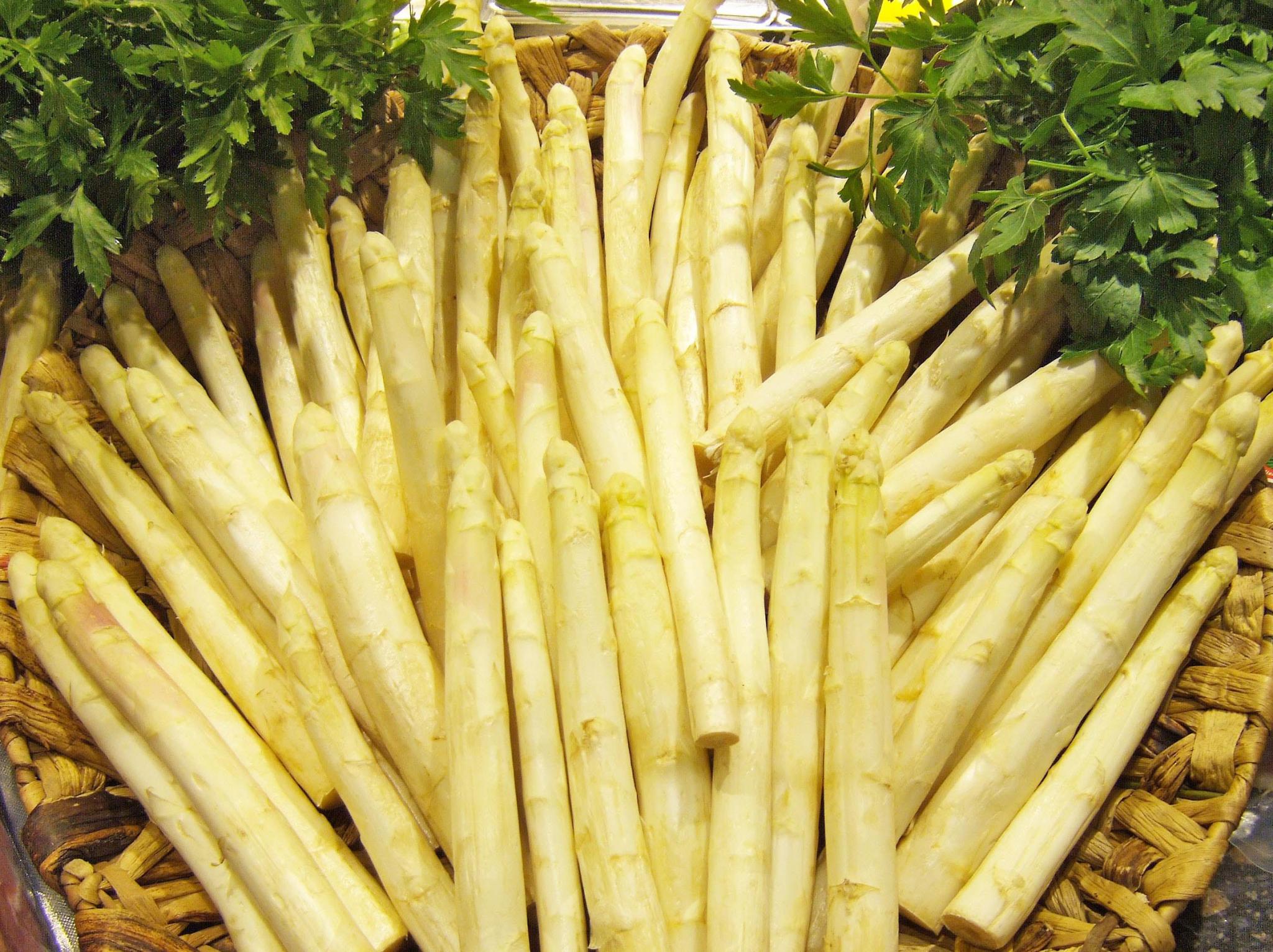 However, some cooks prefer to peel from the tip towards the root end, leaving a good inch at the bottom unpeeled. That way, the root end remains undercooked and the fibres keep everything together, giving us something to hold on to. This method also has the advantage of allowing us to hold the spear in an almost horizontal position, so we don’t have to rise it high in the air, head tilted back, in order to eat it.

Tie the peeled and cleaned spears into bundles with soft string, binding them firmly below the tips and above the ends. Cooking time depends on the thickness and freshness of the asparagus. As a guide, well-peeled spears should take 12-14 minutes. But it could be as few as eight and as many as 18 minutes.

The tips cook much more quickly than the rest of the spears so asparagus must be boiled in a standing position. There are special tall pots for cooking asparagus, but you can get by with those 15cms high jug-like saucepans on sale here. The tips of the asparagus must be well clear of the water so that they cook in the steam. All being well, by the time the steam has cooked the tips, the thicker and tougher stalks should also be tender.

Remove the cooked asparagus from the saucepan and let it drain on several layers of kitchen paper. Transfer it to another plate containing a napkin and cover it. This will absorb more liquid and the folded napkin will keep the asparagus warm. You can then cut the strings before arranging the spears on a serving dish.

Some Spanish cooks add a little sugar to the cooking water to reduce the tartish taste of some asparagus. Others remove the bundle when it is half cooked, dry it carefully, and then return it to the saucepan. This is said to produce a firmer stalk than non-top cooking, but I can’t vouch for that because I have never got round to trying it.

The classic way to serve asparagus is to have them tepid with delicate butter sauces or a vinaigrette — but not one made with virgen extra olive oil which would overwhelm the subtle flavour of the asparagus. 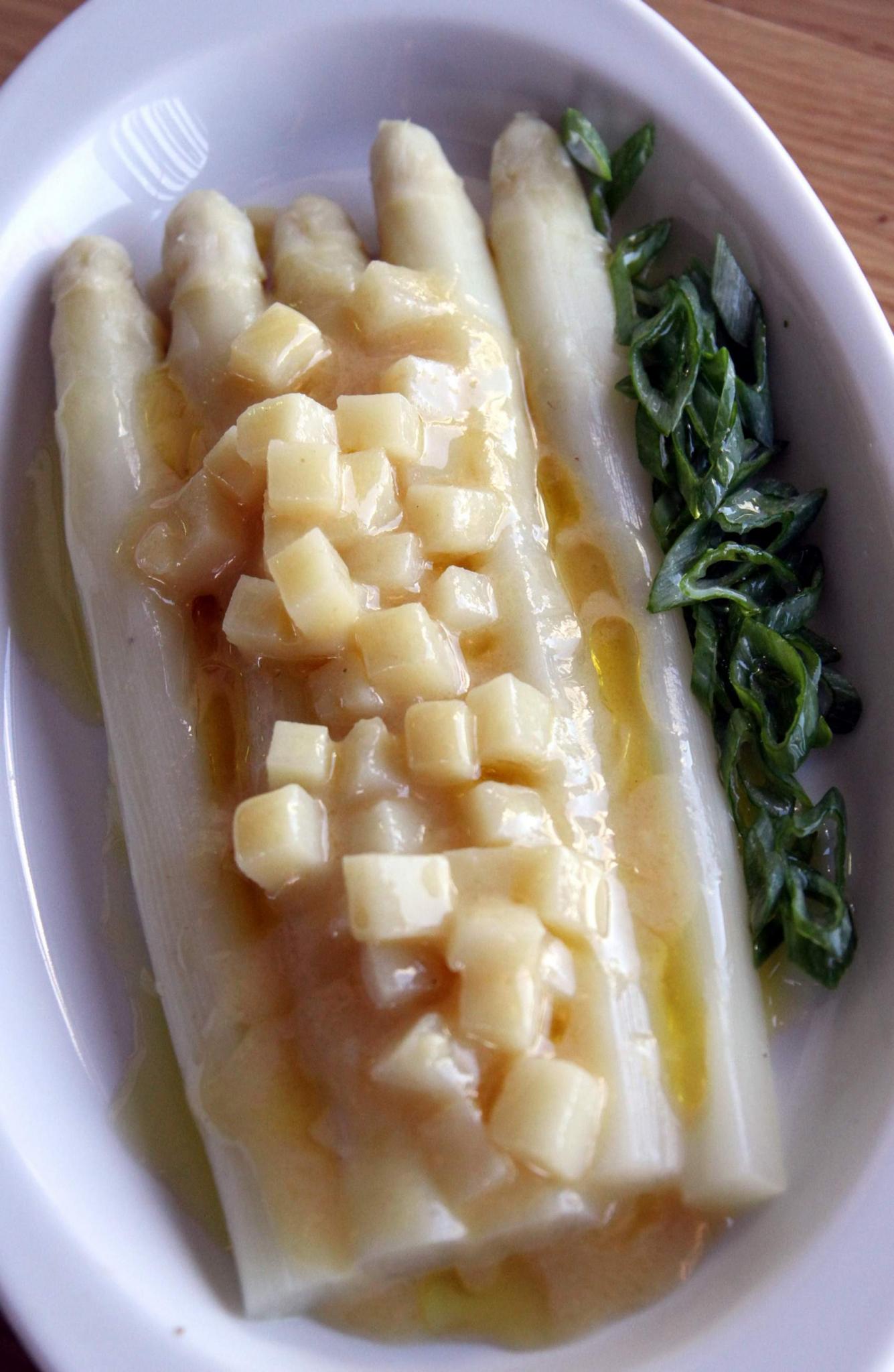 You should always eat asparagus with your fingers, never with a knife and fork — except in those dishes in which the asparagus is covered in a sauce. However, asparagus should be eaten for its delicate taste, so elaborate sauces, especially those full of flavour, should be avoided.

For an English melted butter sauce, put three tablespoons of water into a small saucepan and bring it to the boil. Then add 125grs of butter cut into four pieces. Let it melt very slowly, giving the pan a shake from time to time. When the butter is completely melted, take the pan off the heat and swirl the contents until the sauce is thick and smooth.

The Belgians make a less runny sauce by crushing the yolk of a hard-boiled egg and stirring it into the melted butter little by little until the sauce is smooth and creamy.

The French prefer a hollandaise sauce with hot asparagus. It is made with fresh eggs yolks and high quality butter and is a tricky sauce to achieve: the eggs curdle very easily. I shan’t take up space giving a recipe as you’ll find one in most good books that cover French and European cooking.

Many people like a mustard sauce with hot asparagus — use the French mustards available at most supermarkets. In a blender, combine three egg yolks, two tablespoons of lemon juice, one heaped tablespoon of Dijon mustard, half a teaspoon of salt and two drops of Tabasco.

In a small saucepan heat four tablespoons of butter until it begins to bubble. Add this to the blender while the motor is running. Turn the blender off and serve immediately with hot asparagus. This sauce is also very good with poached fish.

A sauce for serving with cold asparagus is done with fresh egg yolks and must be cooked over an extremely low heat or the yolks will curdle. Put three egg yolks with 140mls of thick cream and 30grs of butter into a small saucepan and cook over a very low heat until the sauce thickens a little. Season to taste with salt and pepper and let it get cold. Softly whip 300mls of cream and fold it into the cold sauce with a tablespoon of lemon juice and a pinch of sugar.

The vinaigrette is a classic with cold asparagus. Try it with these ingredients and proportions. Use eight tablespoons of a mild olive oil to three of lemon juice. Season well with salt, freshly ground pepper, a pinch of sugar and grated orange rind to taste. A hard-boiled egg yolk can be used (as in the melted butter sauce) to make a dressing that is less runny.

Fresh asparagus is best served hot or cold with a suitable sauce. Sometimes we may have only a small amount which we can make go further by serving it au gratin, especially as a mild cheese flavour is a good match.

Cook the asparagus as described above, place it in a buttered ovenproof dish and season to taste with salt and pepper. Cover with a cream or bechamel sauce and sprinkle with grated cheddar cheese or any other cheese that melts nicely and doesn’t go stringy. Dot the surface generously with snippets of butter and brown under the grill. This dish can be assembled beforehand and gently reheated in the oven before browning under the grill and serving.