The Ternelles way ... on it goes

The endless saga of the Ternelles finca continues. Right of access and right of way, exclusion zones for endangered habitats, authorisations for guided walks, public maritime domain, ancient monument, arcane planning regulations, ownership by a banking family, numerous court decisions - Ternelles has it all. It’s no wonder that it has been such a saga and remains one.

It has now come to light that a Pollensa town hall report of 2017 set a figure on the cost of expropriating the Cami de Ternelles all the way to Cala Castell, which takes its name from the Castell del Rei. The castle and the cove form the exclusion zones, the black vulture being most at risk. But for the purpose of the expropriation calculation, these exclusion zones were not what mattered. The cost of the land was all that counted, and the agronomist who was commissioned to come up with a cost settled for 448,410.58 euros. Rather than a round figure of 450 grand, there was instead this extremely precise amount, and it was one which, in the opinion of the town hall’s financial controller, was “perfectly acceptable for the municipal treasury”.

Pro Camins Públics Oberts is a Majorca version of The Ramblers (formerly known as The Ramblers’ Association). It was handed the report by the town hall, having repeatedly called for there to be provision in the annual budget for the expropriation. The open public ways group doesn’t go along with the report’s conclusion that there is no reason for expropriation and has again asked for an amount to be allocated in the budget - the town hall’s 2020 budget has yet to be fully approved.

Great prestige, Pro Camins Públics Oberts says, will come the town hall’s way if it were to be able to open the way to Castell del Rei and Cala Castell to visitors (always taking account of recommended environmental precautions). “It would be a great incentive for interior hotels and for tourism in general,“ the group adds. Moreover, expropriation would redress “a usurped historical right”.

The Ternelles way is one of six ways which lead to the sea that the town hall has included in the general urban plan. The inclusion of Ternelles was partly because of the legal dispute with the owners that has gone on for years. The sea is relevant to the whole dispute, and this is because of a right of Spanish citizens to have unfettered access to the public maritime domain - in other words beaches. Because of the dispute, Cala Castell is generally only accessible by sea and not by land.

There was a court decision which established that the principle of access should apply. Which court was this? There have been that many rulings by different courts that it is difficult to remember. I think it was the Supreme Court in Madrid, which has also recognised that there is both the existence of public right of way and of private ownership of the way.

The mayor of Pollensa, Tomeu Cifre, insists that the town hall has no intention of expropriating the way. On and on it all goes ... 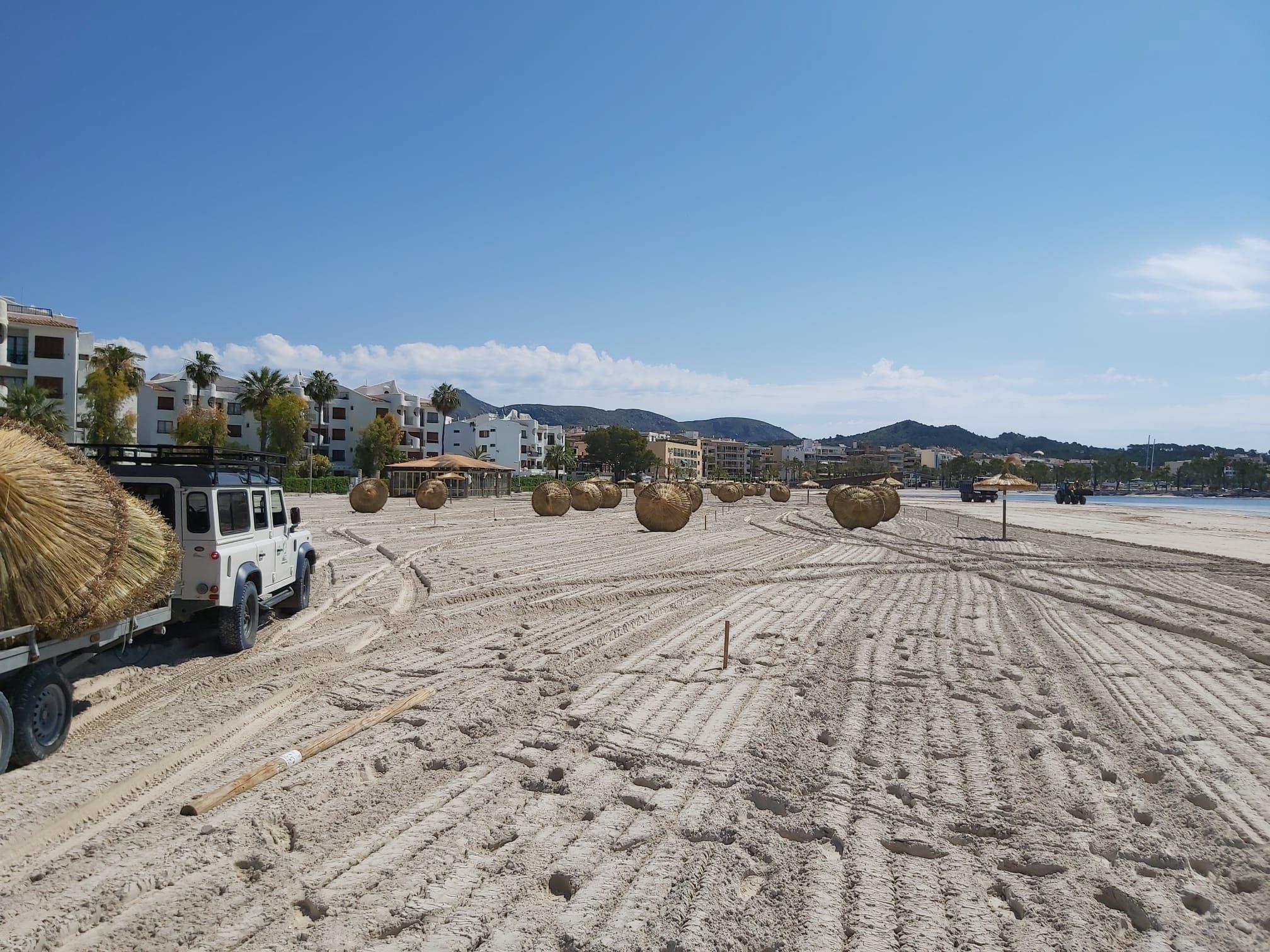 Alcudia Covid-19 management of the beaches

In Alcudia, they refer to the installation of the beach parasols as “planting” them. This takes a fair old time, given that there are that many of them. But for this summer, the number is being reduced by around fifty per cent. Domingo Bonnin, the councillor responsible for beaches, says that the need for social distancing won’t mean any more beach space being devoted to the parasols (and to the sunloungers, which will be installed at the last minute). The space will stay the same. There will just be fewer parasols and they will have distances between them of eight metres and ten metres.

The beach service for sunloungers will start on the eighth of June. This was the plan before the Spanish government changed its mind and decided that beaches could “open” in de-escalation Phase 2, i.e. from Monday, and not from Phase 3. It’s nevertheless likely that Alcudia will be the first municipality to have its service up and running - the town hall manages the service directly, so doesn’t need to worry about concession holders.

It is a major exercise this year. There is a special committee for Covid-19 management of the beaches. It includes the mayor; various councillors; technical personnel for the beaches, the environment, and the municipal services agency; and the local police. This committee is an extension of one for the beach management system, which ensures that the beaches comply with the international standards with which they are certified.
Although there are no concessionaires for the sunloungers and parasols, there are for the chiringuito beach bars and water activities. They come under one of the various areas for which protocols will apply. The others are for the rental of sunloungers; cleaning and maintenance; waste collection; rescue and accessibility.

Bonnin adds that by next week all the protocols will have been settled and be ready to go in Phase 3. One thing for which there is still some uncertainty, he explains, is the issue of showers and toilets. The government hasn’t made clear if they can be used and if they can, under what conditions.