Ranking at number 40 in Boat International’s constantly-updated Top 200 Largest Yachts, 105 metre Lady Moura is a true giant in the world of superyachting. Built as a floating private residence for a discreet Saudi Arabian businessman, her palatial interior has been shrouded in mystery for three long decades but, now she has been presented for sale for the very first time, we’ve been allowed a privileged peek inside. 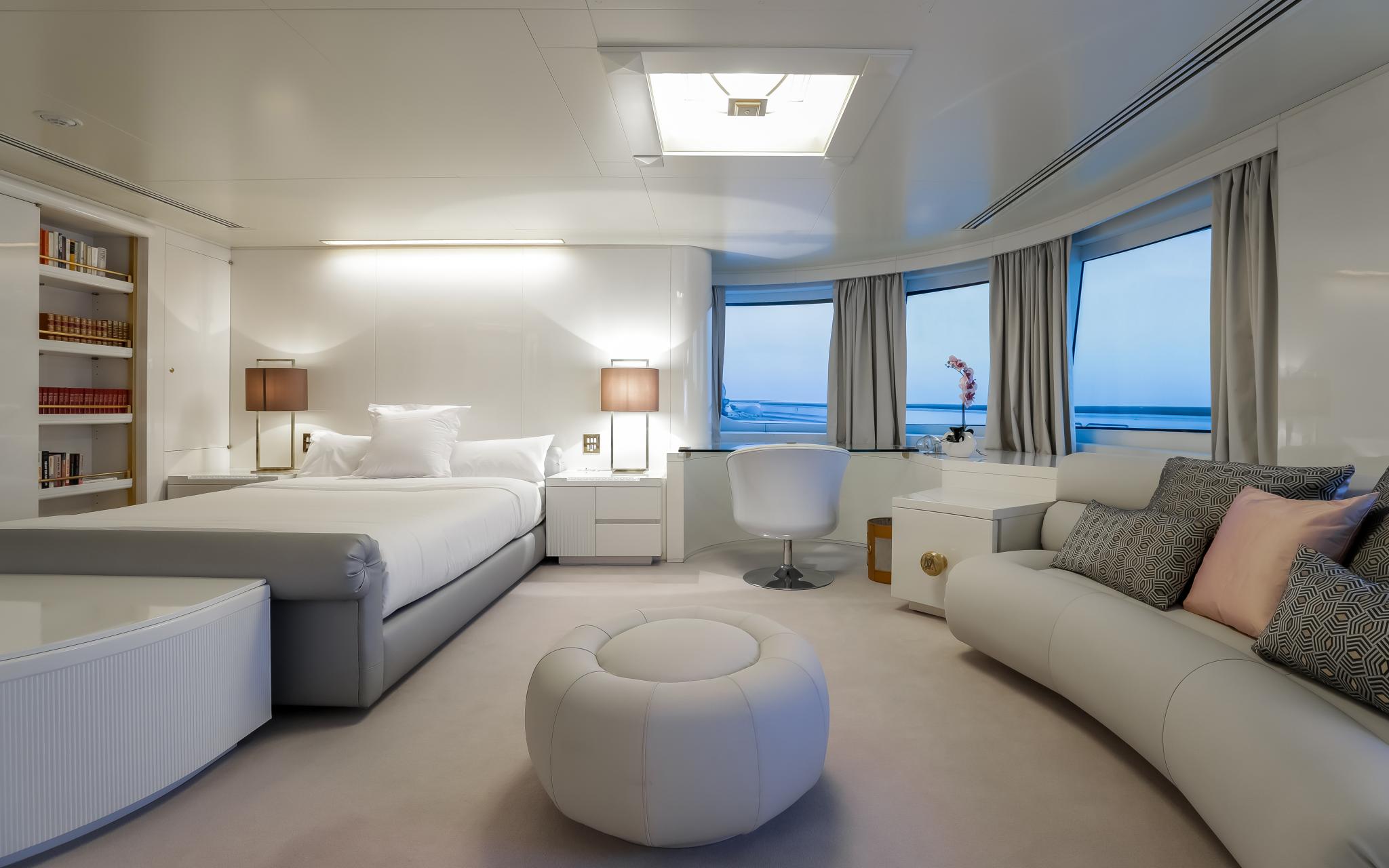 In truth, if you’ve spent a decent stretch of time in Majorca, you are probably already familiar with Lady Moura. Like 80 metre Oceanco Stargate, Lady Moura has chosen this Balearic Island as a home port for a number of years, and is oft spotted cruising our turquoise seas, away from prying eyes. She’s never been chartered, and only welcomed a handful of aristocratic guests, so few will be familiar with her inside. Thanks to the generosity of broker Camper & Nicholsons, our curiosity can now be satiated. 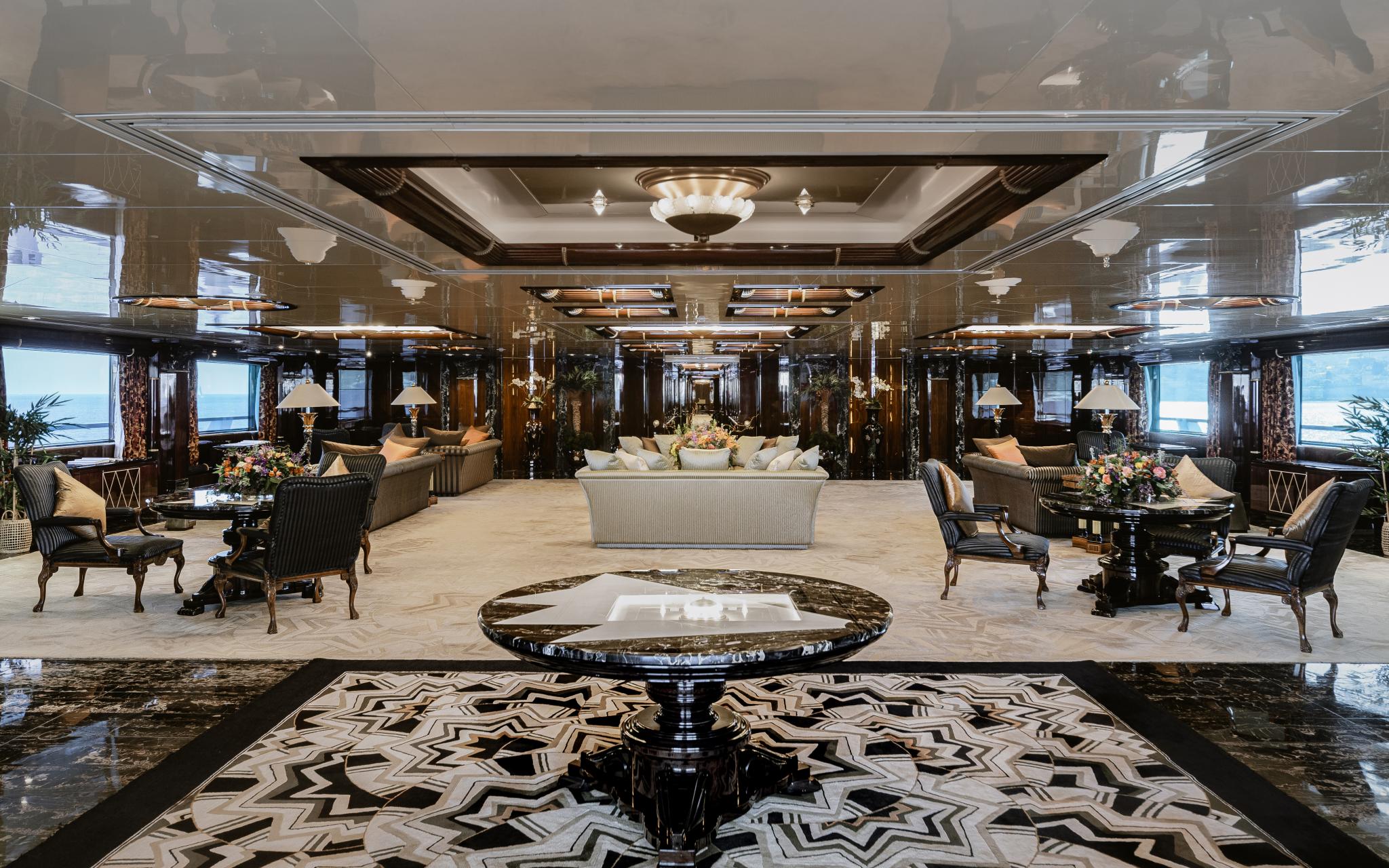 When Lady Moura was launched in 1990, she was actually the ninth largest private yacht in the world - and the most expensive and innovative. This was an era when pretty much the only folk who could afford such opulence were royals, or those who mixed in tight circles with them. Lady Moura was therefore a true status symbol, and insisted on leading-edge systems and engineering to set a new standard in yachting. As a result, she was often referred to as the original superyacht, a sort of base model for the industry as it exists today. 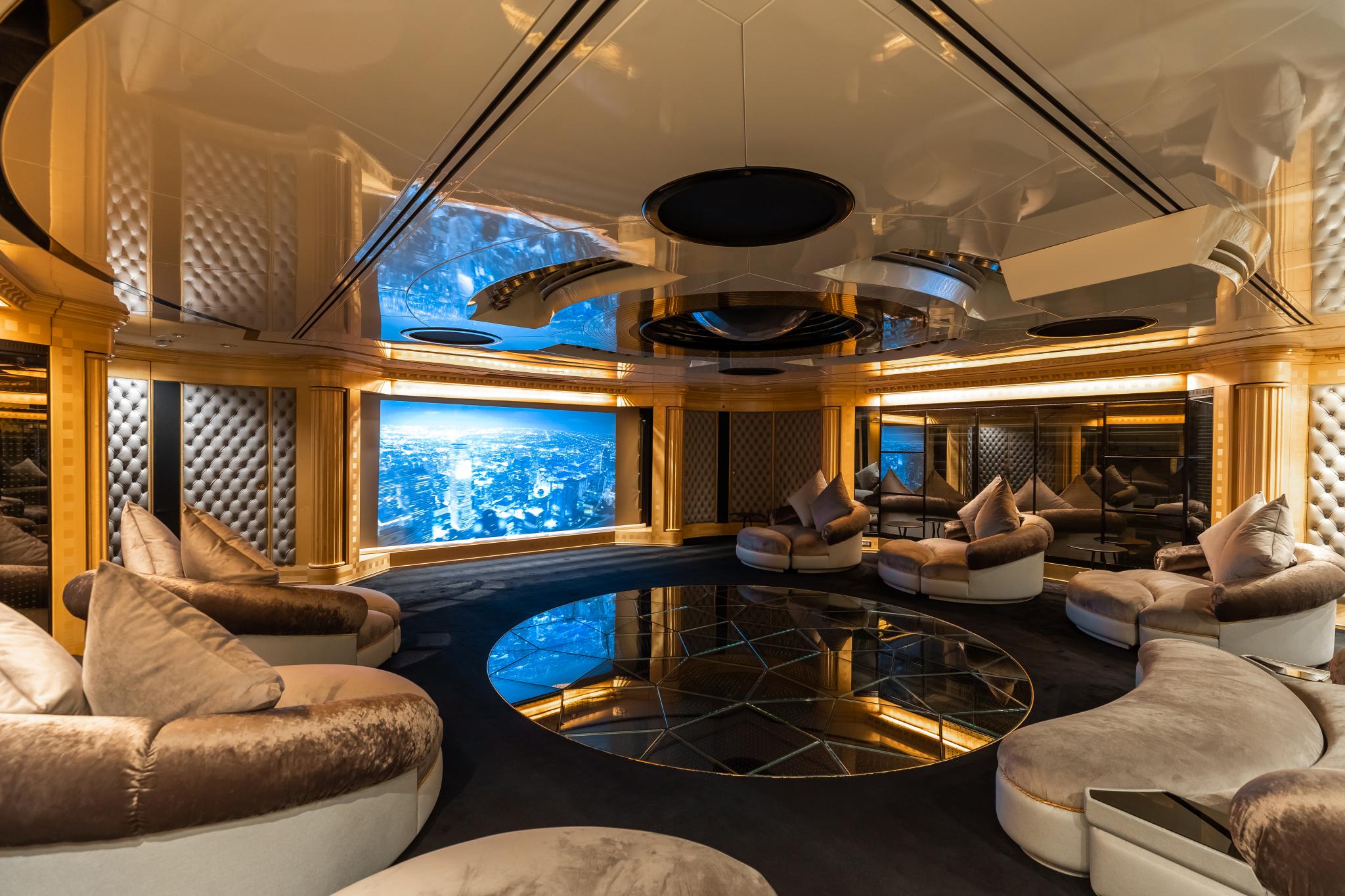 It was crucial to select the right team to create Lady Moura. 1877-established shipbuilder Blohm+Voss was already well-versed in the construction of one-off yachts for nobility, while naval architect and designer, Italian-born Luigi Sturchio, had fashioned elegant interiors for the likes of Baglietto and Benetti, making him an obvious choice. Consequently, Lady Moura bears only the finest finishes, most indulgent lifestyle features, and exudes extravagance from her gold-plated nameplate onwards. 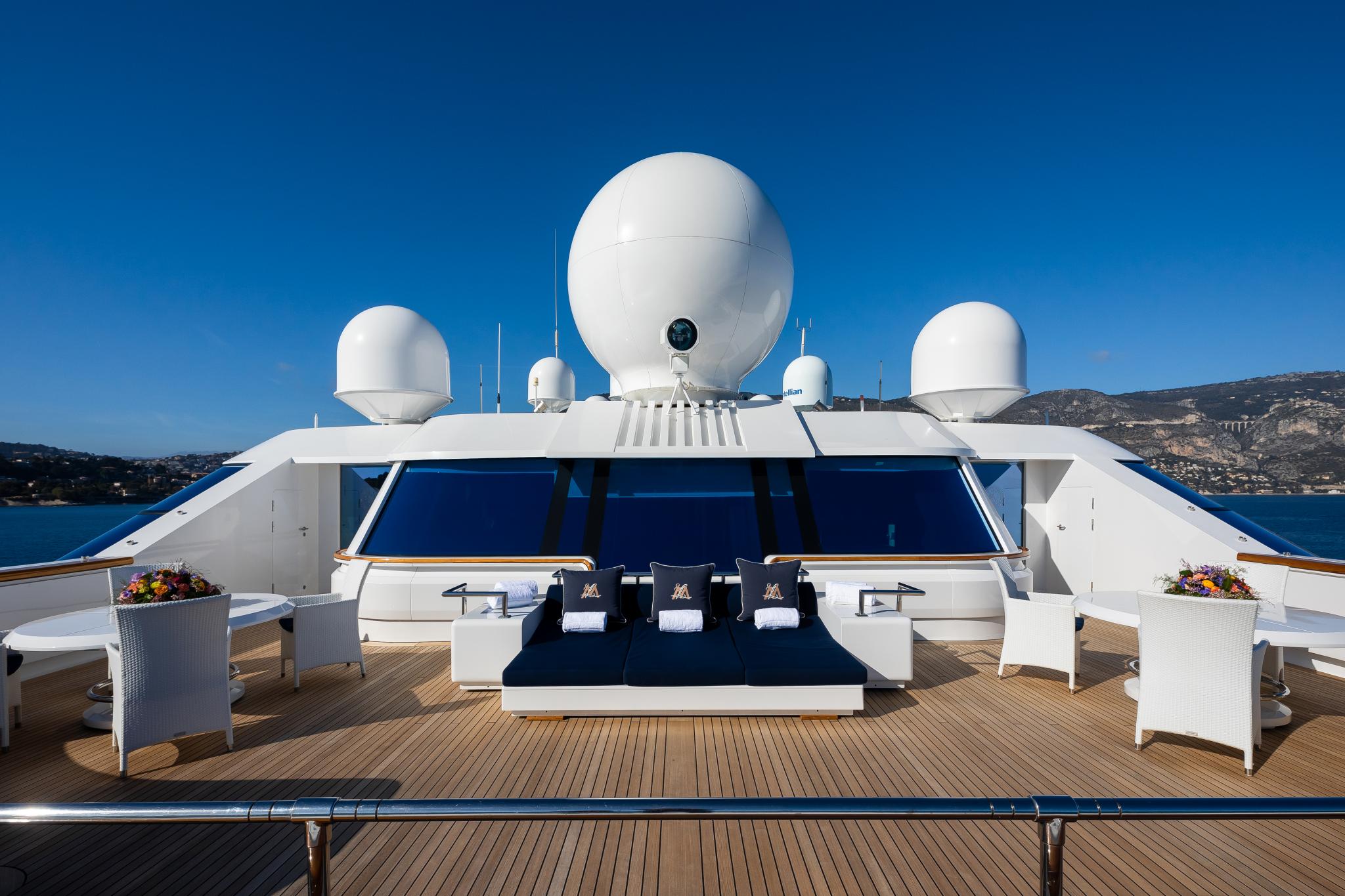 Many of the innovations that set Lady Moura apart in the 1990s, are still highly relevant today. In fact, in terms of technology, she is arguably more advanced than most new launches at the annual Monaco Yacht Show. Balconies off the beach club and side boarding platforms were an engineering first, and transformed the way an owner could access the water. Other design highlights include: hydraulically-operated shell ports, doors, flaps, roofs, gangways (there are six), and cranes, allowing for effortless operation and optimum guest comfort. Equipment such as tenders (currently a large Boston Whaler, a water-ski boat and a landing craft), anchors, and even navigation lights, are hidden behind these hydraulically-operated doors, resulting in an uncluttered, streamlined look. 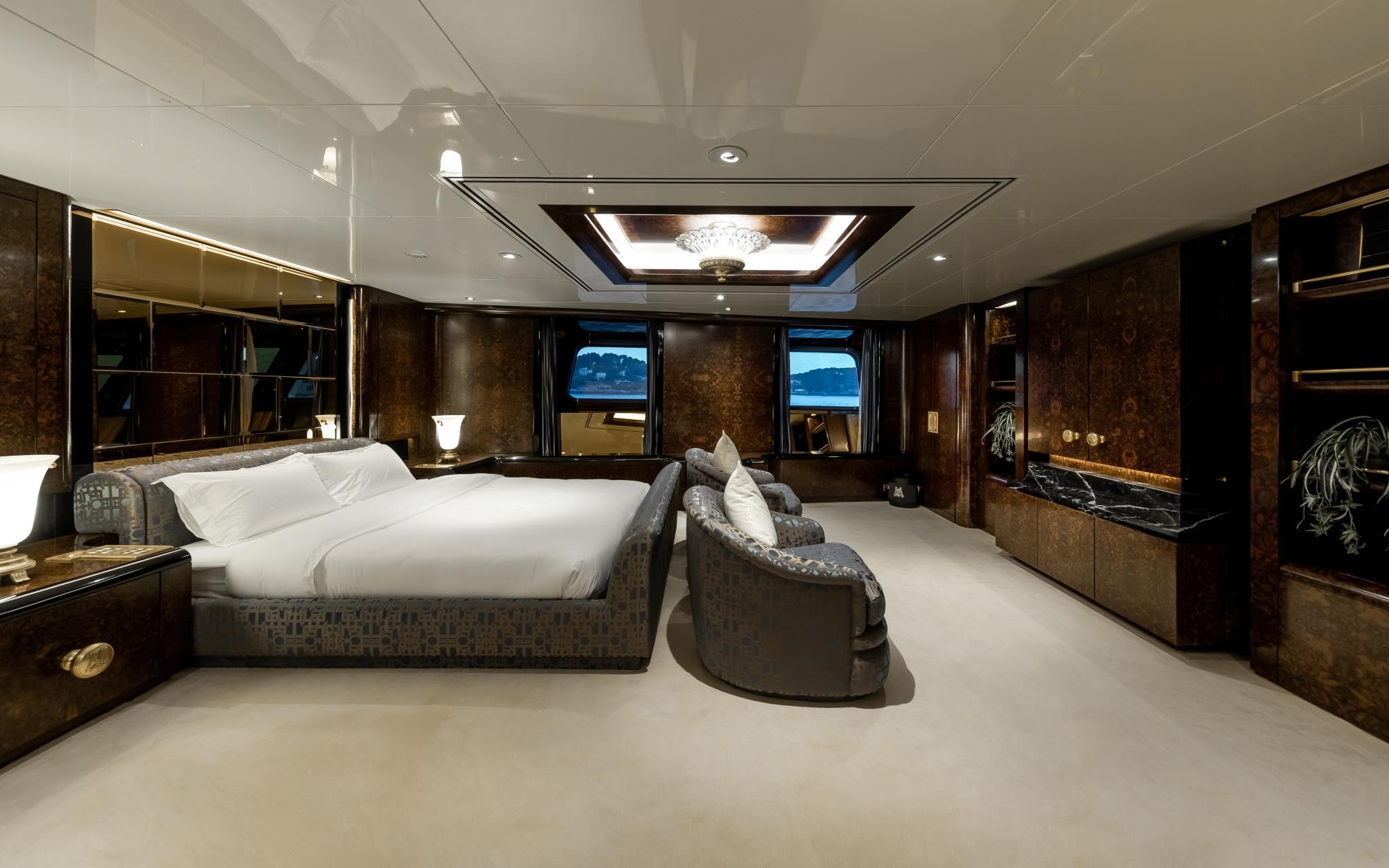 Although conceived as a haven for spending quality family time together, Lady Moura has also served as a platform for important social engagements. To this end, it was important to separate private living quarters from entertaining space. One of her seven (seven!) decks is dedicated to family accommodation with a full-beam owner’s suite alongside six family-only suites. In total, she sleeps 26 guests. Lady Moura also has capacity for an extraordinary number of crew and staff - 72 if required - giving an unprecedented crew-guest ratio for the ultimate in service and comfort. 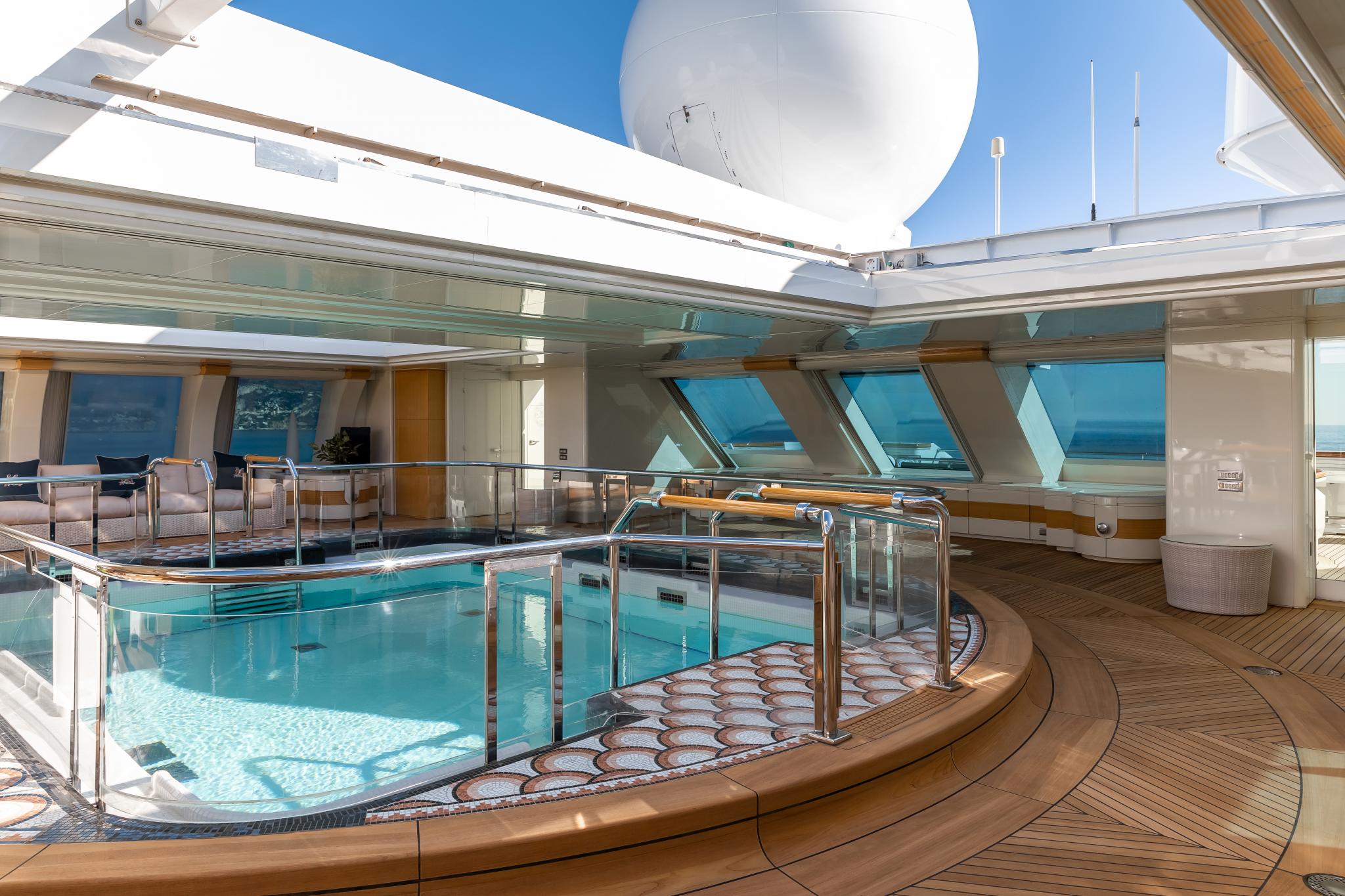 Luigi’s handiwork is evident throughout, from the regal dining rooms with deep-cushioned sofas to the plush staterooms with marble-clad bathrooms. The yacht also boasts bespoke furniture made by David Linley, the Earl of Snowdon, Queen Elizabeth II’s nephew.
Lady Moura has many of the amenities one may expect from a high-end abode. Her incredible volume allows for a helipad, cinema room, discotheque with DJ booth, gymnasium, and medical suites for both guests and crew. 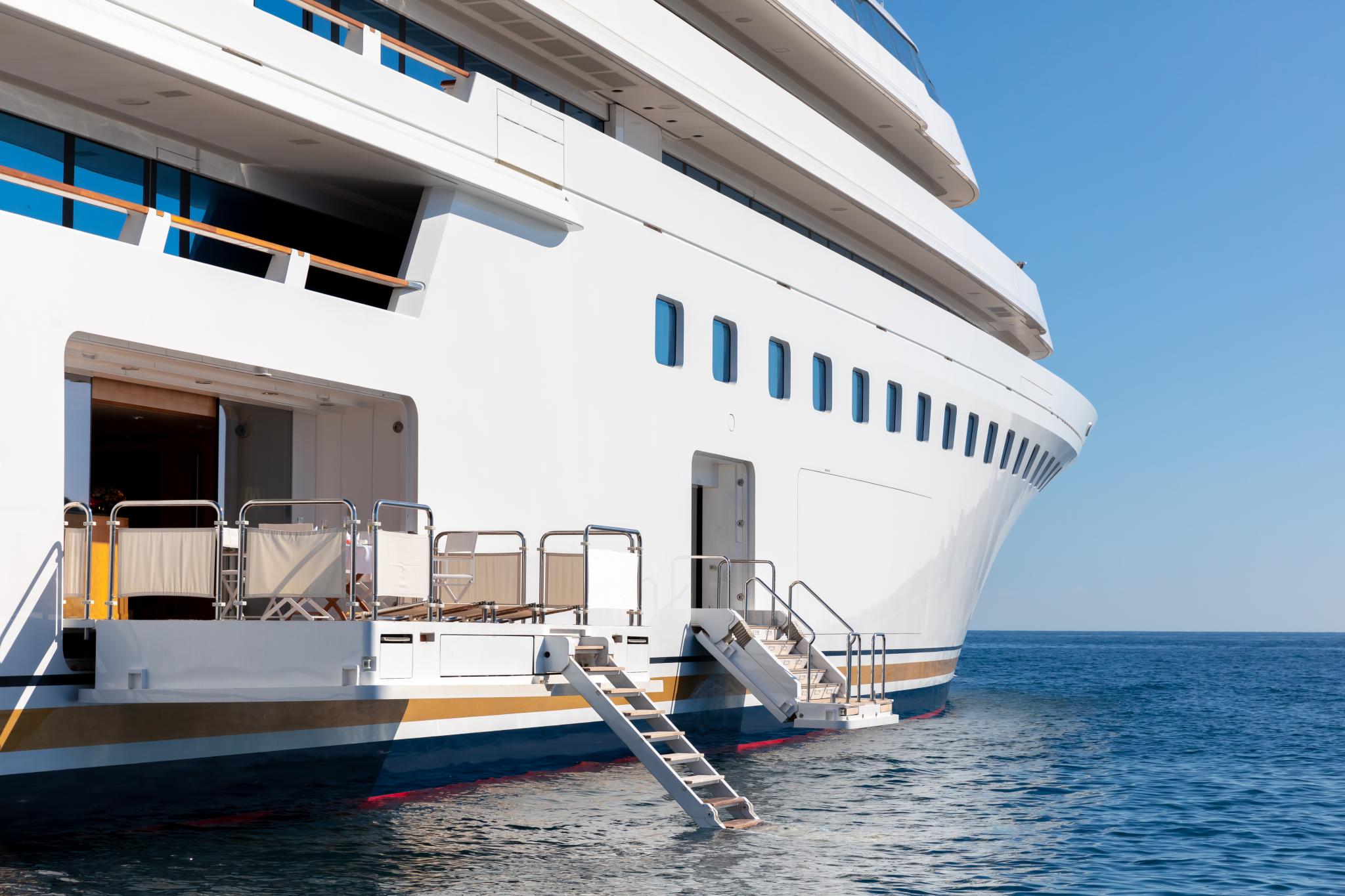 There are two galleys equipped with commercial-grade appliances, a bakery, and separate laundry facilities for guests and crew. And, a certified sewage treatment plant. It’s beginning to become clear why such a high number of staff might be necessary. She also has a recreational deck with indoor pool complete with two diving boards, a gymnasium, Spa and sauna. A retractable roof over the pool enables usage in all conditions. The midships beach club is another highlight. At the water’s edge, with fold-out sun terraces to port and starboard, guests can slip in and out of the sea with ease. 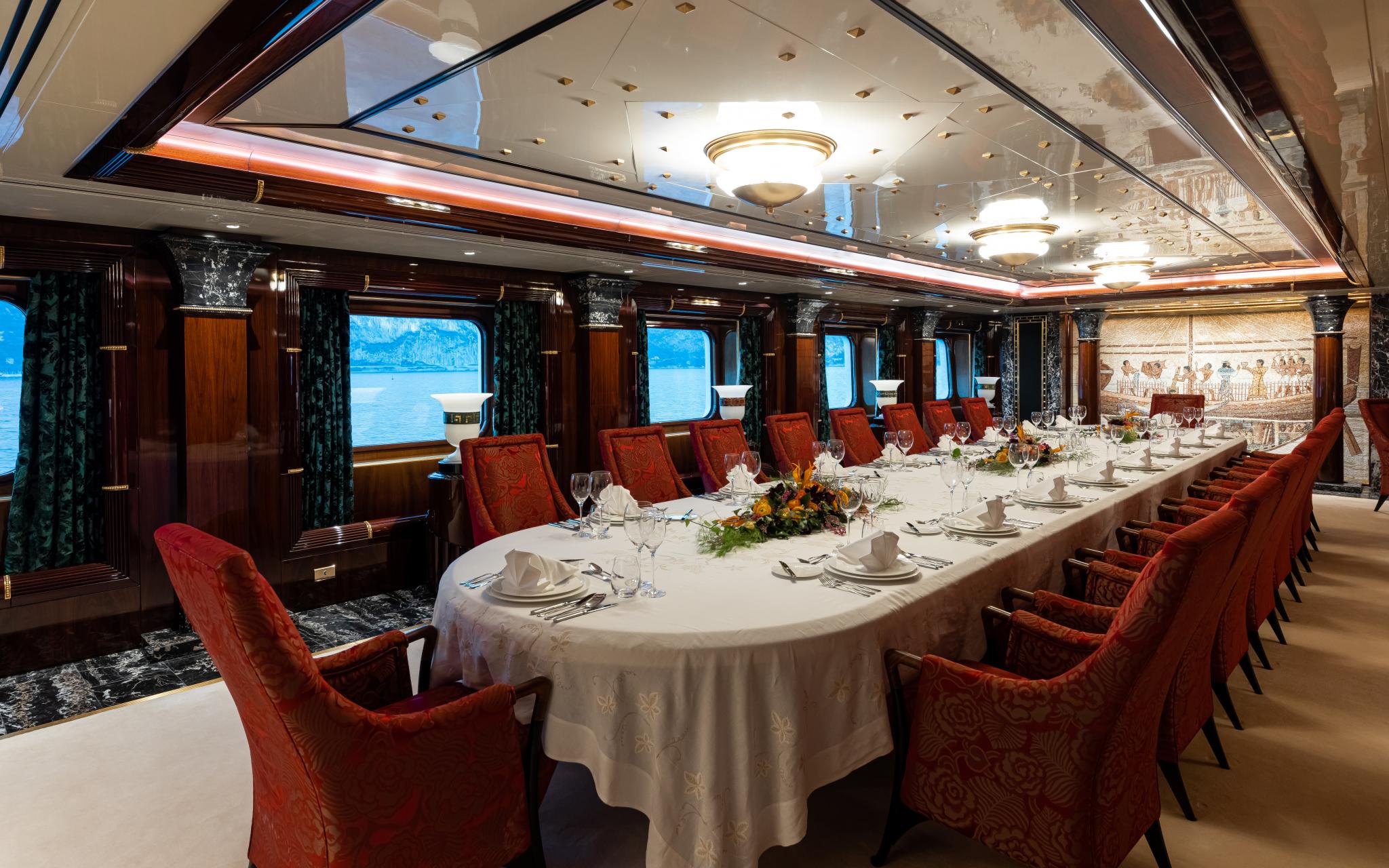 In the same hands since launch, Lady Moura has been subject to rolling maintenance and improvement, negating any need for major refits. The longest yard period was in fact with Blohm+Voss in 2017, some seven months, alongside fresh new hull paint. Other recent upgrades include the rebuilding of her engines and generators, new teak decks, and refurbished crew and technical spaces - all in 2018-19. A remote monitoring system of all fuel flows, temperatures and vibrations, facilitates real-time troubleshooting and support. She has a phenomenal range, in excess of 8,000 nautical miles at 17 knots, and low operating expenses given her size and stature. 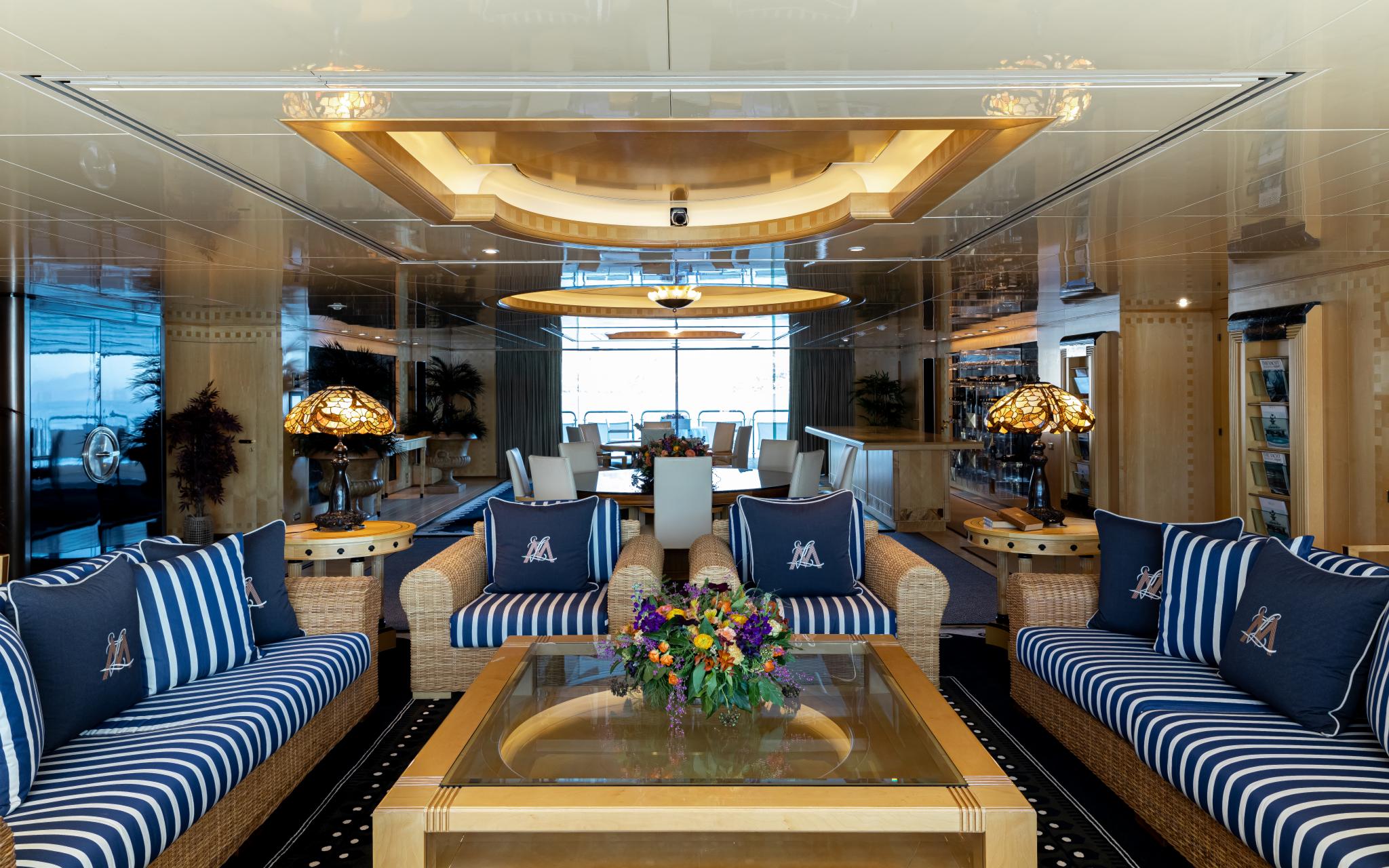 From the year she was built, Lady Moura would cruise onto the French Riviera, turn every single head and the season would be declared open. She’d then anchor off the famous Boulevard de la Croisette, while big-name actors and directors were papped at Cannes Film Festival screenings, then ease her way down to Monaco where Formula One legends such as Ayrton Senna, Alain Prost, Jean Alesi and Gerhard Berger, would scream past her mooring. When she departed at the end of the summer, it nigh on marked the end of the season. 30 years on, Lady Moura still has the same head-turning allure and, hopefully, her new owner will continue this great legacy of luxury and splendour.
www.camperandnicholsons.com