How healthy are our marine reserves?

Marine protected areas (MPAs) are created to increase fisheries productivity and to protect valuable habitats and species. They are a key management tool to improve our ocean’s health. The 21.5 % of the Balearic Sea is designated as a MPA, but only 0.16 % is fully restricted to all kinds of fishing. MPAs have had a positive impact on Balearic marine ecosystems but well below their potential. So how successful have they been so far?
In the absence of fishing activities, marine ecosystems and fishery resources bounce back. MPAs experience the so-called ‘reserve effect’, a term often used to describe higher catches by fishermen following the declaration of a marine reserve.

The best way to find out if fishing reserves – a type of MPA created with the main purpose of increasing fisheries productivity – are working or not is to count the number of fish in them and how the population changes over time. Visual surveys are conducted by researchers in Balearic MPAs every two or three years with a focus on commercial fish species with high and medium market value. Examples of these include:

In order to estimate the impact of a marine reserve in terms of increase in the above mentioned species, underwater visual surveys are carried out in three different zones: 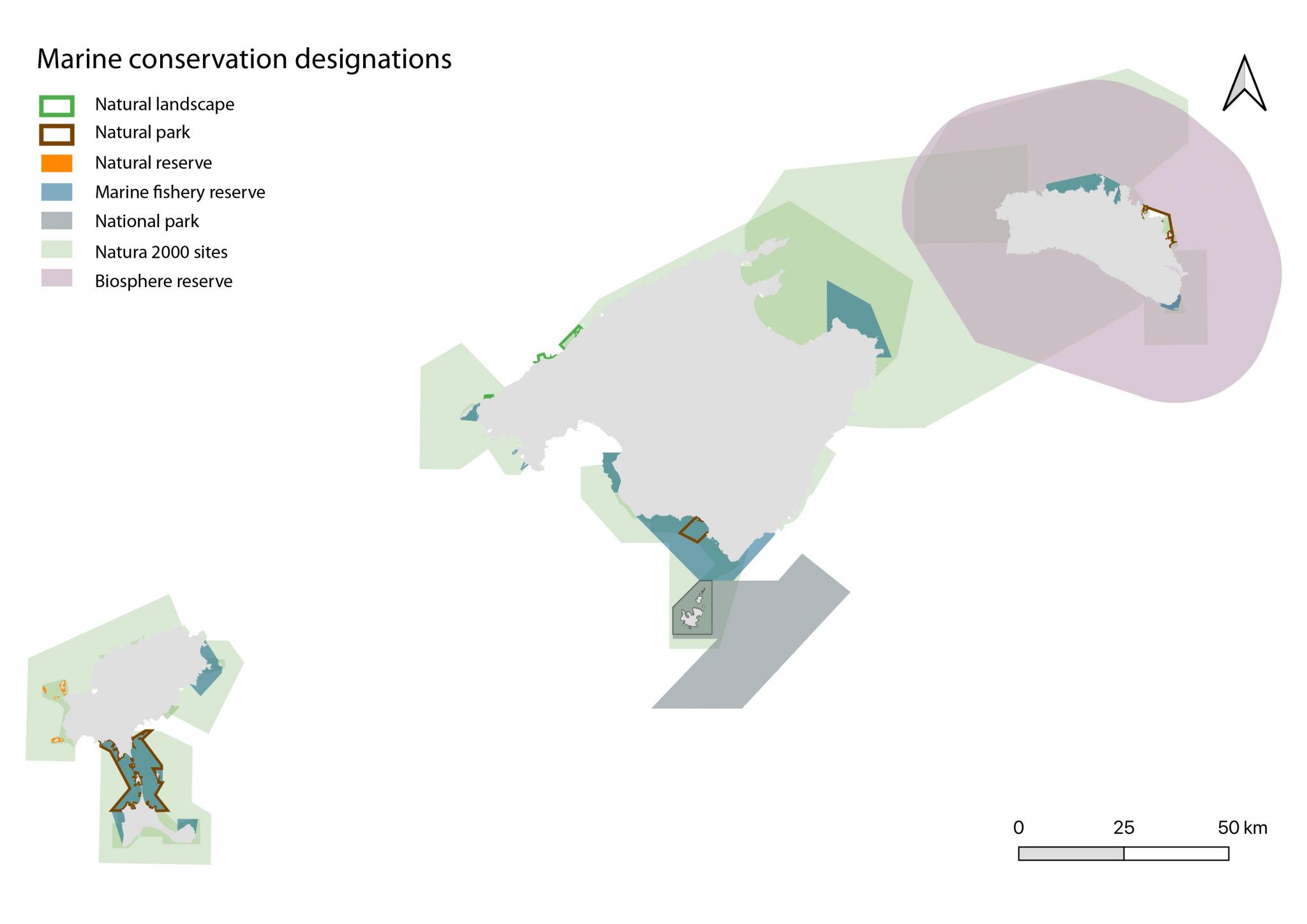 1) marine fishery reserve: waters inside the reserve where trawling is forbidden and artisanal and recreational fishing is controlled.

2) no-take zone: waters inside the reserve but with the highest degree of protection where all types of fishing activities are banned.

3) control zone: outside the waters of the reserve but with similar environmental conditions, thus allowing direct comparison with the reserve waters.

The monitoring is carried out by the Fisheries department of the Balearic Government in collaboration with Tragsatec, Menorca Socio-environmental Observatory (OBSAM) and the Spanish Institute of Oceanography (COB-IEO, EIJF).

The results show that in general, fish stocks have recovered in several Balearic MPAs. However, if we look at the trends for the fisheries reserves of the Balearics we see that the increase in fish populations is not always as expected.

· Bay of Palma (1982) – the quantity of fishes has progressively increased but the number of species shows no temporal variation.
· North of Minorca (1999) - shows no improvement possibly due to uncontrolled professional and recreational fishing.
· Es Freus of Ibiza and Formentera (1999) - shows the highest fish recovery of all MPAs through time.
· Migjorn de Mallorca Marine Reserve (2002) - no visible changes, apart from a slight increase in the no-take zone.
· Albufera d’es Grau Natural Park (2003) – one of the worst MPA recovery values.
· Illa del Toro and Illes Malgrats (2004) – El Toro has one of the highest improvements possibly due to environmental and oceanographic conditions. Besides, the smaller changes in Illes Malgrats could derive from having reached its carrying capacity and that fishing is allowed for longer months.
· Llevant de Mallorca (2007) - improvements after 2010. Especially good in the deep water areas of the Farallons d’Aubarca and Cala Gat.
· Freu de Sa Dragonera (2016) – positive results in just 2 years of monitoring.
· Illa de l’Aire Marine Reserve (2019) – shows a small improvement.

What can we do to help MPAs reach their full potential? One of the strategic objectives at Marilles Foundation is to improve the effectiveness of Balearic MPAs. Our diagnosis shows that these are the reasons why MPAs are not fulfilling their potential:

1. Poor control and enforcement
2. Limited knowledge and monitoring on state and progress of MPAs
3. Limited activity by management bodies
4. Little engagement from local actors
5. Mix of regulations, authorities and legal forms.
6. Lack of awareness and knowledge by the public

And last but not least, insufficient levels of funding (50 % of what we need). MPAs are a key asset to the Balearics, they give us fish, biodiversity, economic benefits, leisure and recreation opportunities; lots of benefits for a very modest cost. They can play a role in the economic recovery of the Balearics and as such they must be properly funded.