When Ben Miles first announced that he planned to set a new World Guinness World Record for the longest static bike ride, I did think he was completely mad. But, based on my personal knowledge of him and his determination, I didn’t for one moment doubt that he wouldn’t succeed, unlike some others who said he wouldn’t be able to do it. Fuel to the fire perhaps because on Tuesday June 16th Ben Miles entered the Guinness Book of World Records as the new holder of the Longest Marathon Static Cycling with an incredible 277 hours, 20 minutes and 32 seconds on the clock. After a pretty decent nap I managed to catch up with Ben and chat about his extraordinary achievement. 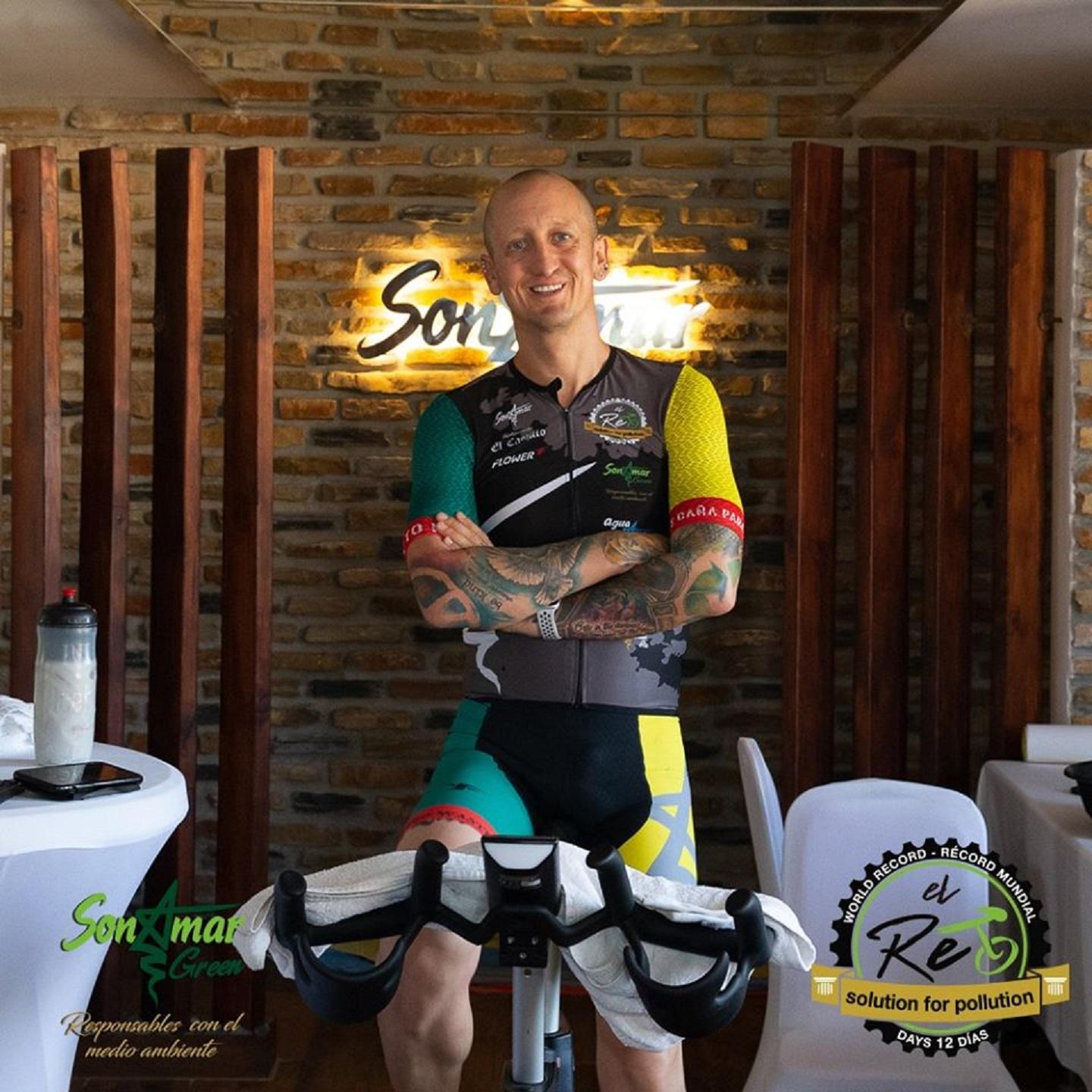 Q: Whose silly idea was this then?
A: All mine! I initially had the idea when I was training to do a long distance bike ride from Gibraltar to Norway. I spent quite a bit of time on a static bike getting ready for the trip. At the time the record was nine days, but by the time I decided to really go for the record it had increased to eleven days and four hours, so I decided to set my sights on getting to twelve days.

Q: How did you prepare your body for the record attempt?
A: Once I had contacted Guinness I set the start date for my attempt as June 5th 2020, I then set training goals, starting in January 2019 and I worked towards them. The first one I did in January 2019 was to just spend twelve hours on a bike as I hadn’t even done that before. So my training went from zero to super extreme pretty quickly. By the end of January I had already done a 24 hour static ride. Although initially I had a trainer, after my attempt to do a 72 hour ride in June went wrong we parted company: I had been cycling on the roof of the restaurant at Son Amar to try to get some publicity for the record attempt, but it was very hot and I collapsed a third of the way into the ride. It was then that I realised that I would have to take my training plan into my control completely and I have trained myself since then. When the lockdown happened I had to change my training plan but I kept training, I didn’t feel prepared at all when we finally got to June 5th, the first few hours of the ride I felt terrible. It was the worst start of all! I had about thirty people in total looking after me in shifts. The main ones were my partner Bea, and my friends Cenk and Bodgan who were with me the majority of the time, along with Yusef, Mumin and Juan. They had to help me with everything from eating to peeing. Plus we had to have two independent witnesses at all times to make sure that I wasn’t cheating. And I had support from Lola, a brilliant massage therapist who treated me everyday, and there was a nurse present all of the time taking my vitals hourly. 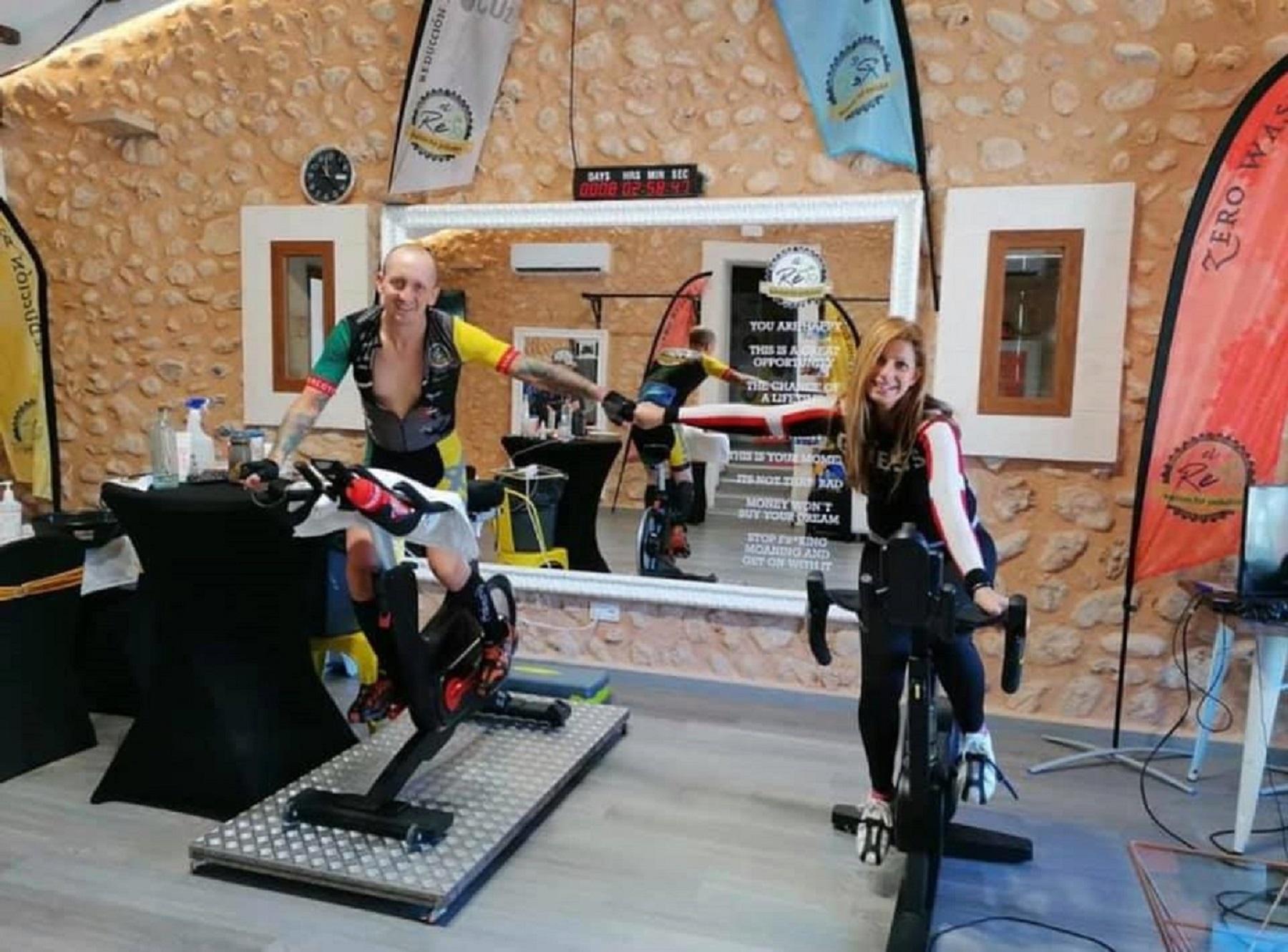 Q: What about nutrition?
A: At the beginning of my training my doctor was worried that I would not get enough nutrients to sustain me because I am a vegan. I went along with the idea of taking supplements for a while, but then I stopped taking them. I was having regular blood tests and they always came back perfect which made me laugh because I just relied on actual food in the end rather than all these pills and powders. During the training and the event I ate every two-ish hours. I would eat something sweet and then two savoury things. So for example I would have a fruit smoothie and granola at 8am, at 10.30I would eat something rice based, like a vegan paella or risotto, then at 12.30 I would eat some pasta or lentils mixed with veggies, and then repeat the pattern, at 14.00 I might have some vegan apple pie, or cheesecake, or brownie. We were weighing and measuring all of my intake so it was very planned, but all real food.

Q: How did you manage with sleep during the ride?
A: The sleep deprivation was very difficult. I had my first experience of it when I did a training stage of a seven day nonstop ride. It was then that I and my team realised that waking me up again after the allowed amounts of sleep was really going to be hard. For every hour of riding I was allowed a five minute rest so I had to accumulate enough to be able to sleep. I would sleep for 60 minutes and then they would have to wake me up. My body could do it but my brain did not want to so it fought them. They tried spraying cold water on me, screaming in my ears, playing the music really loudly, it was all very stressful for all of us. I came up with the idea that they should try giving me warm water to wash my face with and a toothbrush and toothpaste but that would be refreshing and snap me back, and it worked.

But the symptoms of sleep deprivation are very similar to schizophrenia, the paranoia and hallucinations are very real when your brain is exhausted and you are trying to maintain consciousness. You aren’t really in control of your thoughts, your brain just creates new realities for you. I would wake up and think that my friends and loved ones who were supporting me were FBI agents out to get me, or that I was trapped in a bank vault and couldn’t understand why I was there. It’s not like you are having a nice dream, it’s always as if you are in a nightmare. It means that you don’t trust anyone and it distorts your surroundings. I videoed myself talking to myself so that when I woke up it could be played to me and I could remember that I needed to trust the people around me and start pedalling again. There were a lot of visual distortions, I started to see in black and white, the only person who was still in colour when I woke up was Bea.

So that meant she had to be with me every time I was due to wake up. I lost all sense of taste as well. Even though the room remained the same to everyone else, in my mind if changed a hundred times during the record attempt. I would think I was in my old garden in England, I was in a jungle, in various places in Son Amar, in a community centre in Mansfield, it changed the dimensions of the room I was in, it changed the floor, removed the ceiling…my brain came up with endless scenarios.

Q: Would you do it again?
A: Not in a million years. It was the hardest thing I have ever done. I am so,so happy to have done it, but I will not do it again. When the Guiness judge called me to confirm that I had done it, as soon as I heard that it became really hard to continue to the planned finish which was supposed to be twelve days. My brain just would not allow me to go on, my mind won in the end. I was so exhausted I could not understand what I was trying to do anymore.

Q: What drove you to do it?
A: I rode to raise awareness about the environment, cycling is the Solution to Pollution. But I also wanted to prove something to myself. What attracted me to try to break the record was that it would just be me on a bike. I felt like I would be able to prove my worth. The training and the new world record has given me something: I’ve found myself, I’m a forty year old man now and I have finally found Ben Miles. 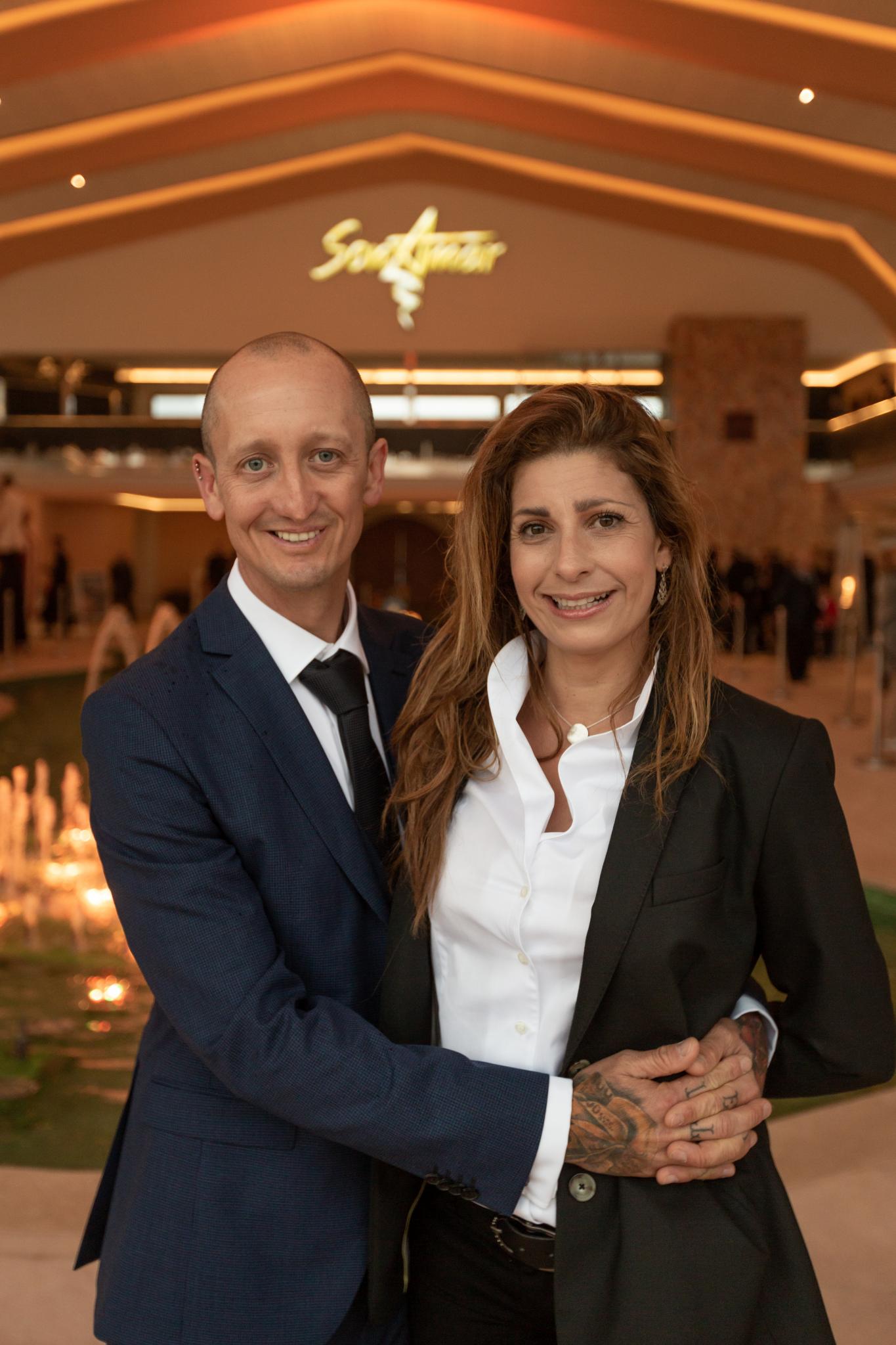 Q: What does the future hold for you?
A: After I had broken the record and finally stopped riding I rested overnight.The next day we had a celebration reception at Son Amar where I made a couple of speeches. I had decided to ask Bea to marry me. I couldn’t put my emotions into words, so instead of trying to tell her, I just got down on one knee and proposed to her. She was very surprised because I’ve always said I would never get married again, but I think how she was always the person in colour when I was at my lowest points in the record attempt really was a sign about how important she is to me.

I have loved the process of training for the record, I have learned so much. I have learnt that I am as strong mentally and physically as I thought I was. I’m not the strongest or the fastest person but I knew I was pretty strong, and I have proved that to myself. Today (Friday June 19th) is the last day I am working at Son Amar. I am stepping down from the directorship. Bea and I are planning to take a break and go on a road trip. And then we are starting a couple of new projects. But I will keep training, it will always be part of my life now.

Congratulations Ben on setting the new world record and best of luck with the next part of your journey.