The ‘brodetto’ in the greixonera with its layer of croutons. | Andrew Valente

You find fish soups all over the world but the countries that have excelled at cooking a variety of fish and shellfish in the same pot and then serving up a soup bursting with flavour are those along the Mediterranean coast.

This isn’t at all surprising: fishermen have been casting their nets in the Med for thousands of years and right from the beginning had no option but to eat some of their catch while out at sea — and when they returned to port.

It’s not at all easy to cook and eat while out on a fishing trip, so the whole operation was kept as simple as possible: several kinds of fish were gutted, thrown into a pot of simmering water and in no time the crew were eating.

Over the centuries the fishermen’s wives added a bit of culinary know-how and some very fine recipes evolved, especially in France, Italy and Spain. Most of these soups can be quite laborious in the making because they call for a wide variety of fish, which fishermen and their wives always had at hand.

The most famous fish soup of the lot is the bouillabaisse of Marseilles, but also made in other parts of Provence. The truly authentic version contains 16 varieties of fish — and that’s not including the shellfish. No one, of course, does it like that nowadays — not even the fishermen’s wives.

I was thinking about fish soups last week after eating one from Abruzzo at La Bottega in Calle Fábrica (Tel:971-454892). Cook-owner Michele Caporale, who is from Abruzzo, frequently makes dishes from that part of Italy for his family and some of his regular customers. This time is was an abruzesse fish soup called brodetto di pesce, made in a traditional Majorcan greixonera.

Like all fish soups, there is no set recipe: a brodetto is is made with those fish that are in season and also those that happen to have featured in that day’s catch. Michele used sea bass, skate, calamar and large cigalas, so it was a classy version.

Its superb taste was based on a very rich fish stock, and it was so nicely concentrated it was more like a fumet. The stock of a fish soup is always of the utmost importance, and it’s especially so with the brodetto: the word comes from ‘brodo’, meaning stock or broth, so it is an integral part of the dish and cannot be anything less than first class.

As you can see in the picture, Michele serves the brodetto adorned with croutons of French bread. They were beautifully done and very crisp. The underside gets a little soft and that made a lovely contrast of textures with the crunchy upper side. 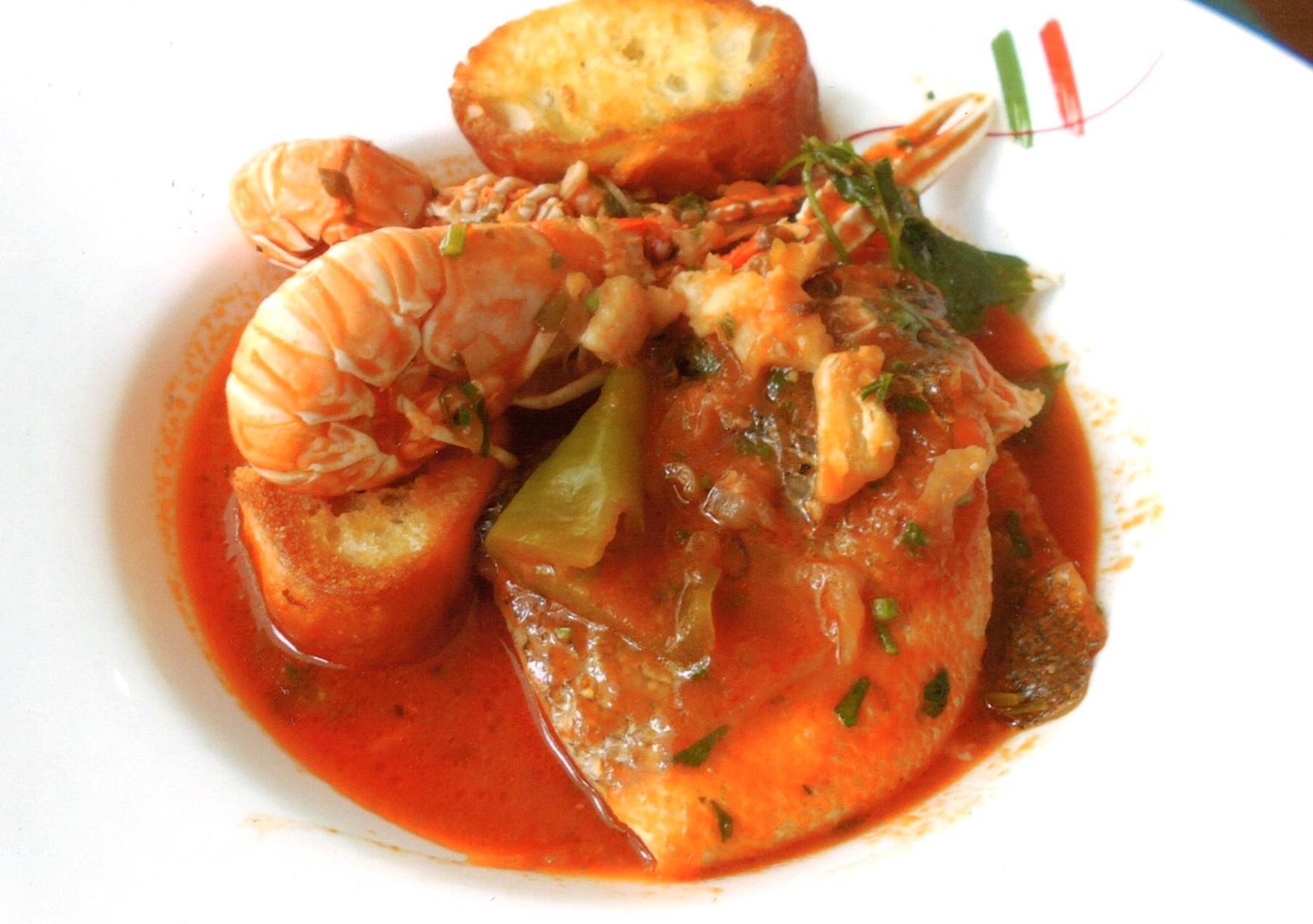 The right kind of crouton — of a good golden colour and very crisp — is also an essential part of fish soups. As I said to my dining companion after tasting two, “Michele even makes his croutons better than other cooks.”

Some dishes of this kind — the bouillabaisse and the Catalán ‘zarzuela’ — have very little stock and are more like fish stews than soups. But the ‘brodetto’ is definitely in the soup class because it comes with lots of stock which, as I said, is so rich it is more like a fumet.

In some restaurants and households in Abruzzo, when the ‘brodetto’ with the fish, shellfish and calamar have been plated, the cooking pot goes back to the kitchen and pasta of some kind is added and cooked while the diners eat. When they have finished the fish, the pasta appears on the table. I very much like the idea of pasta being cooked in such a rich fish stock.

I was surprised and delighted to see that Michele had used skate in the ‘brodetto’. This is a fish, called ‘raya’ in Spanish, that I see every day at the markets, yet I come across it in restaurants only once about every three years.

It’s a lovely delicate white fish, its price is right and the fishmonger hands it to you skinned, cleaned and cut into pieces of the exact size you want. All you have to do it gently fry it in butter for a few minutes and serve it.

Michele had put the pieces of skate on top of the ‘brodetto’ and it looked as if they were cooked in the residual heat of the greixonera. The flesh is easily scraped off the cartilage, and as it was a small skate, some of the cartilage was tender enough to eat. The skate was a most successful part of the ‘brodetto’. I wish more cooks would put it on the menu.

I was also surprised to see that Abruzzo has its own fish soups, mainly because I think of that part of Italy as being mountainous and mainly sheep country. It is like that but I had forgotten it also has coast line. I must go on the lookout for other abruzesse fish dishes.

The ‘brodetto’ costs €25 per person and it’s for a minimum of two. For most of us it’s not a dish for everyday eating, but it’s such a huge dish (we had seconds) that you don’t need a starter.