Perfect menu for a summer’s day

There’s no doubt about it: what we eat on a summer’s day makes all the difference to our enjoyment of a meal. When the temperature is over the 30C mark, certain ingredients, certain dishes, certain cooking methods are needed to jolt our jaded palates and get us interested in eating.

Selecting the ideal dishes for a summer’s day lunch is no easy matter and we frequently make bad choices. But that didn’t happen at Munay: the Peruvian head cook made the choices for us and both starters and mains on the menú del día were perfect for a summer’s day.

The first starter was called ‘tiradito de vieiras’: slivers of scallops, yellow peppers called ají amarillo, glacé sweet potatoes, crunchy fried sweetcorn corn called choclo and chifles — thin slices of banana fried until they have the texture of potato crisps. This dish had lovely contrasts of textures and tartish tastes that really got the tastebuds sitting up and asking for more. I even enjoyed the taste of fresh cilantro (which I don’t care for) because it spiked the other flavours even although it was well in the background. What a superb way to start a summer lunch.

The other starter was on a lower key but was also most refreshing. They called it ‘solterito arquipeño’ (the bachelor from Arequipa, a Peruvian city) and it was a salad with Peruvian fresh cheese, fresh broad beans (very few), olives and sweetcorn dressed with cream of rocoto (a Peruvian yellow pepper) and olive oil. A lovely cool mixture and ideal for sharing.

Peru has one of the first great fusion cuisines and in it you see influences from all over the world: ancient Incan, Spanish, Italian, African, Japanese and Chinese. The Japanese and Chinese traits are very strong and in any Peruvian restaurant or home you will always come across stir-fried noodles and rice dishes.

On last week’s menú del día it was ‘arroz chaufa’, a famous dish in the country’s long list of Oriental style dishes. In this case it was stir-fried rice with veggies with a little soy sauce and also tamarind flavours.

It came with pieces of breadcrumbed chicken plus two slices of wanton pasta deep-fried to a golden crispness for more contrasts of textures. They used round rice for this dish, which is notoriously difficult to get right. But the Peruvian cook did a beautiful job, so he obviously has had lots of practice — which is what one needs for all successful rice dishes.

There is no printed menu because of the virus crisis so you download the details on your smartphone. We don’t have smartphones so the waitress recited the four dishes. We had one of each and shared everything.

This is the third time I’ve had the menú del día at Munay and on each occasion we had a splendid meal. It is one of Palma’s best value-for-money deals. The dishes are always so different from what is on offer at other places and, most important of all, cooking standards are extremely high. I know nothing at all about the head cook (not even his name) but I can see him at work in the semi-open kitchen. He is obviously a consummate professional with a great deal of experience. As you can see from what I have written in the review, he takes great care to balance textures and flavours and his cooking times are spot on. Two of the dishes were worth a 10, but instead of giving it to them, he gets the 10-rating. He deserves it.

Restaurante Munay, Carrer Arxiduc Lluis Salvador 4, Palma. Open for lunch and dinner every day except Sundays. The menú del día costs €15.50 for starter, mains, and a choice of dessert or coffee, plus mineral water or a caña. A half menu costs €9.50 and includes one of the dishes, dessert or water or caña. When you make the booking let them know if you want vegetarian or vegan options.

Our two menús del día cost €31 and we had an extra caña at €2 (a good price in a restaurant of this category) so the total cost with VAT was €33. After we had eaten I noticed they have Peruvian beers at €3.20. I’ve never tasted a Peruvian beer, so next time I’ll try one. 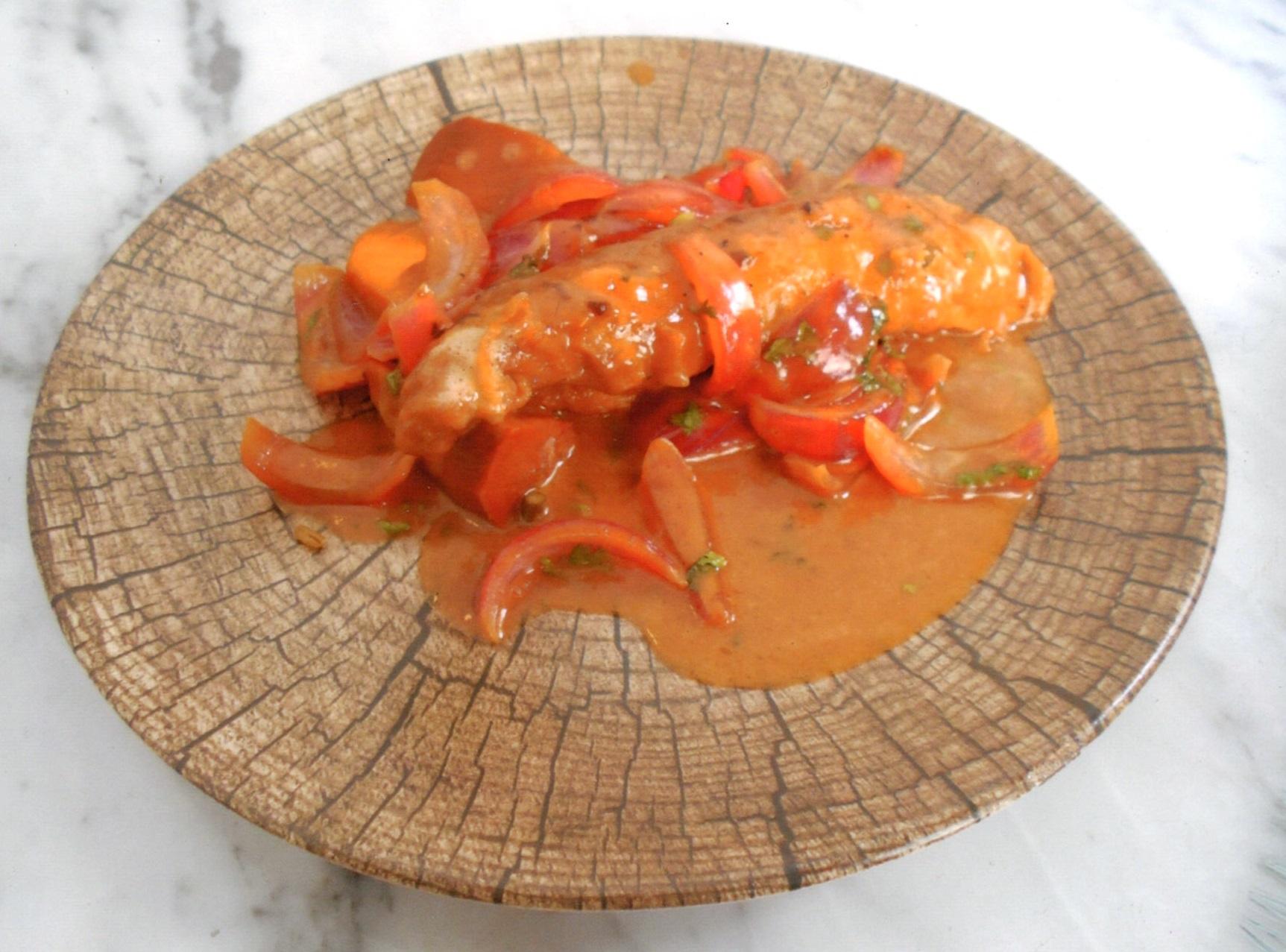 When early humans stopped being nomads and became settlers living in a chosen area, one of the many problems they immediately encountered was the conservation of food.

They were extremely clever and found many ways of delaying the putrefaction of fish and meat. Salting was one and smoking was another. The use of strong vinegars was also a most efficient way of keeping fish edible for weeks or even months.

This was especially useful when fishermen came back with a huge catch of sardines, mackerel or other fish that were in season and abundant.

Spaniards invented a recipe for cooking fish that was also a method of conserving it for weeks. It is called escabeche and it was such a successful way of dealing with a large haul of fish that it travelled the world.

You find the recipe in Sicily with the name ‘schivecch’ and on the Italian mainland it is called ‘’schiabezia’ and ‘scabeccio’. There is even an English version called ‘caveach’ and the recipe appeared in three 18th century cookbooks by well known English writers.

Columbus took escabeche to the New World and it is used in the Caribbean and all over South America. A feature of all the different versions of the original escabeche is that local ingredients are used.

Peru has many variations on the escabeche theme and we had one of them as a mains at Munay. It was done with a Mediterranean fish I have never had before. It’s called ‘cabrilla’ in Spanish and comber in English, and it is one of the Serranidae family that includes, sea bass, grouper and sea perch.

The fish was floured and fried in the escabeche manner and the flesh was white, soft and tasty — and there wasn’t a single bone. An escabeche always has a pronounced taste of vinegar — more often than not too much, for my liking.

This version had a sharp vinegar touch but it wasn’t overpowering and it had more of a hot spicy taste than you find in European escabeches. It contained glacé sweet potato — a most Peruvian variation.