Sandro: The cook who is also a baker

The word ‘staple’ has many meanings. It can be a thin piece of wire used to hold sheets of paper together and it can also be a country’s principal item of trade or production. And when applied to a country’s diet, it means those foods that help to fill the nation’s bellies.

Rice is the staple of Asian countries and it is the main component of every meal. The Chinese never asks a friend if he has eaten. They ask: “Have you eaten rice today?” The implication is that if you haven’t, then you must be feeling somewhat hungry and are ready for a bowl of rice.

It was the potato that killed hunger pangs in Ireland: the Irish ate lots of potatoes at least once a day. It was such a staple food that when crops failed in the 19th century famine was rife and hundreds of thousands of people emigrated, most of them to the United States.

In 18th century France, Bread was the main food of the nation and a catastrophic shortage led to a revolution that completely altered the course of world history.

Of these three basic foods — rice, potatoes and bread — bread is the most extensive: it is eaten in large quantities on all five continents.

The Spanish, the French and the Italians are the three nations that today eat most bread. A Spanish friend, tiny and slim, loves bread so much that every time I eat out with her she needs a second serving of bread — having eaten most of mine as well as her own.

A Majorcan friend some years ago always took a couple of bread rolls when he went to a Chinese restaurant because they never had any bread — and he couldn’t eat without it. Things have changed since then and nowadays many Chinese restaurants serve bread, either steamed or baked in the oven. Both are ideal for mopping up the rich sauces that come with meat stews and other dishes. However, in all Oriental cooking, white rice is there to soak up the sauces.

The son of a Majorcan friend last year started his first year as a student at the Hostelry School of the UIB, the Balearics university. He immediately became very critical of just about everything culinary, especially the ‘barras’ of bread his mother buys at the supermarket. He breaks off a piece of ‘barra’, bites into it, and says: “This barra tastes of flour.” He is off to a very good start.

However, I like those supermarket ‘barras’ when they come out of the oven. I cut them open, extract and discard the crumb so that I’m left with the crusty shell of the ‘barra’. I spread it thickly with German butter or drizzle it with virgen extra olive oil and I find it is quite a treat.

There are only a few restaurants that make their own bread rolls from scratch, but I know of only one cook who bakes his own loaves every day. He is Sandro Putignano, whose restaurant (called Sandro) in Calle Ramon i Cajal (Tel:971-962311) is popular with Italian food fans.

I discovered Sandro’s loaves of bread late last year when I needed a picture of a caponata and went to his place to order one. 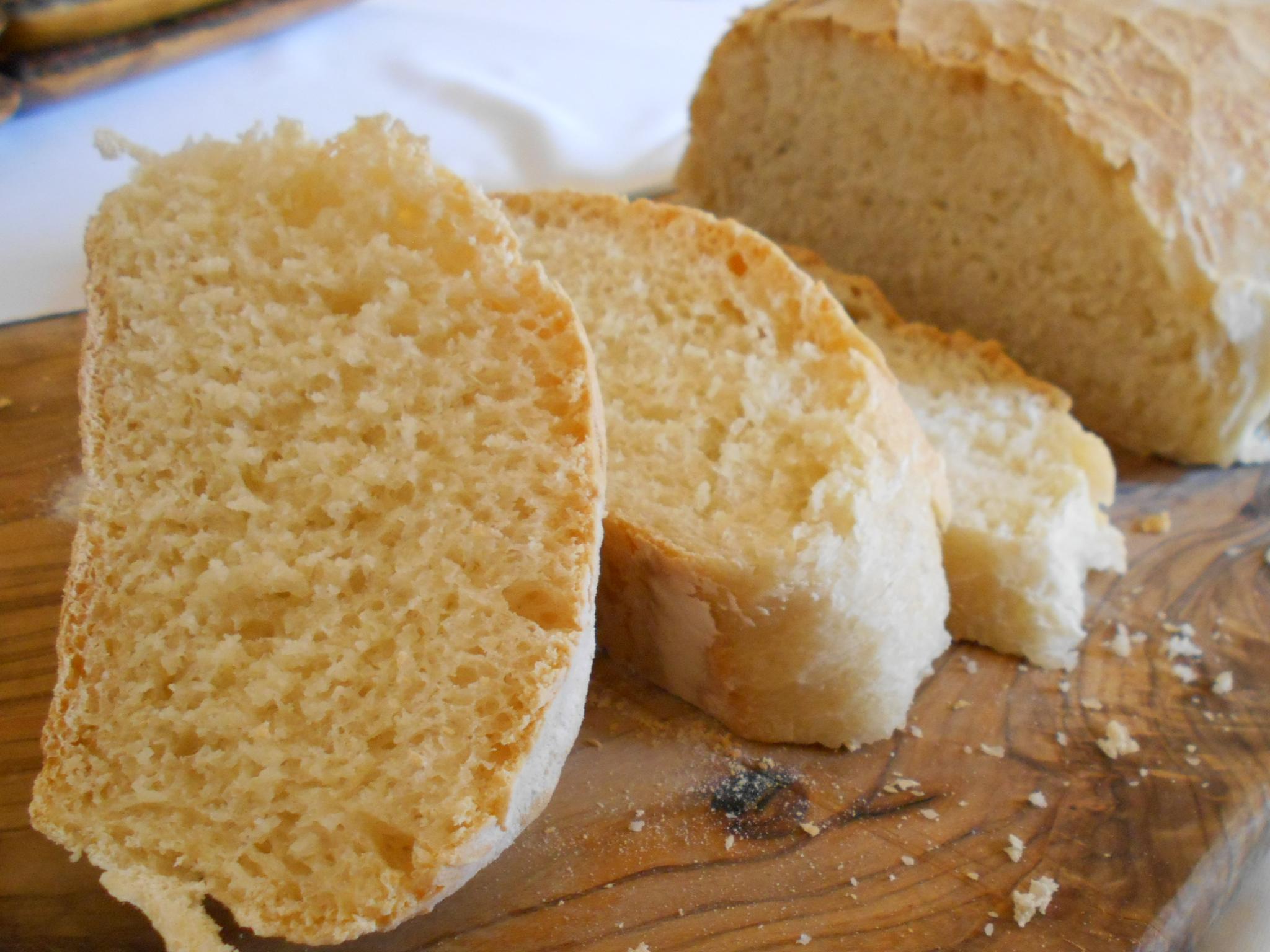 With this dish, which is a Sicilian version of a Majorcan tumbet, he served slices of bread that were incredibly light and spongy.

The caponata, like a tumbet, comes with lots of rich juices and Sandro’s bread was absolutely ideal for mopping them up. There wasn’t a speck of sauce on that plate when I had finished.

Sandro’s bread is amazingly light but it also has consistency and a certain density. I returned to get pictures of the bread and he baked it while I was there: I wanted a picture of the bread as it went into the oven and after it came out.

The picture of the sliced bread was done after the loaf had been out of the oven for less than 10 minutes. As you can see in the picture, the loaf cuts beautifully into nice even slices. It was easy to slice with a knife and didn’t fall apart.

Sandro is a cook and not a professional baker, yet he manages to make this superb bread. How does he do it? He actually told me the secret and his method is so simple anyone could do it. I suggested he keep the secret to himself so that no one can copy his style of loaf.

I never reveal culinary secrets publicly but I can say that Sandro gives the dough a long fermentation and then bakes it at just the right temperature in one of his pizza ovens.

The result is that the dough doesn’t form a crust but develops a kind of crisp skin on the surface, which you can also detect in the picture.

When a loaf is as memorable as this, it is easy to see why bread became a staple all over the world. And when there was no bread in Paris it is also easy to understand why the French revolted and overthrew the Monarchy on July 14, 1789.