A Majorcan friend has an admirable policy when buying turrón at Christmas: as it’s a once-a-year treat spread over only 12 days, he eats only the most expensive ones, costing from €10-€20 a bar.

I learned to do the same and I apply an identical theory at this time of year when buying fresh figs: I get only the dearest ones (which are always the best) at the Mercat d’Olivar or El Corte Inglés. The season is extremely short and if you don’t dive in and buy the finest, it’s suddenly all over until next year.

What are the best figs? If you’re shopping at the Mercat d’Olivar go to the stalls Ismael Cuenca or Germans Es Pagès and buy those that take our fancy: you won’t go wrong. At Germans Es Pagès, the figs come from their own finca. You will also find the best of figs at Frutas Daniel in the Santa Catalina market and at the supermarkets of El Corte Inglés in Jaime III and the Avenidas. 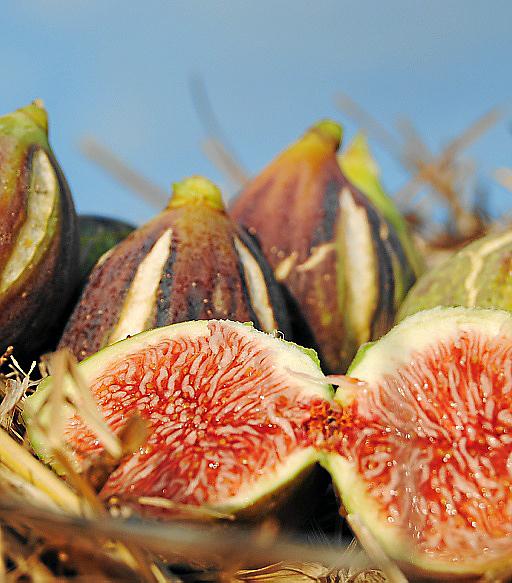 However, it’s quicker and better if you know the names of the most popular local figs. Ask for the ‘aubacó’ variety or the ‘peretjal’, which has a green-brown colour and is considered one of the finest and sweetest.

There is also the ‘coll de dama’, easily identified because it is tri-coloured: green, white and with brownish tinges. Another two varieties should be on sale this week — the ‘martinenca’ and the ‘bordissot’.

If you feel at all uncomfortable about using these Mallorquín names, write them down in clear block letters and show them to the stallholders. They’ll appreciate that you’ve gone to the trouble of finding out the names of the best local figs. The prices at the moment range from €6.90 to €9 a kilo and they won’t drop much below that — so jump in and enjoy them before they disappear until next year.

An old Arab proverb says there are as many kinds of figs as there are men. That’s a bit of an exaggeration but there are more than 850 varieties of figs of different sizes, colours and shapes, which means that those grown in Majorca (some 280 varieties) are not necessarily the same as those on Spain’s other Mediterranean shores — and they could be quite different from those in other parts of the Med.

If you have a fig tree or have access to one, you will be able to taste figs at their finest. All ripe fruit tastes better when picked from the tree and eaten immediately — and none more so than the fig.

But the time of day when you pick a fig is also important. The ideal moment is late in the afternoon of a sunny September day. The sun dries the skin and the flesh just under it, thus concentrating the sugar content and making the figs taste sweeter than usual.

Most of us don’t have fig trees at hand but we can mimic this effect by putting a single layer of figs on a plate and leaving it in the hot afternoon sun for three or four hours.

The opposite happens when we pick a fig first thing in the morning: the skin is damp with dew and the flesh is watery and almost tasteless. By the late afternoon on a sunny day the fig will have a different story to tell. 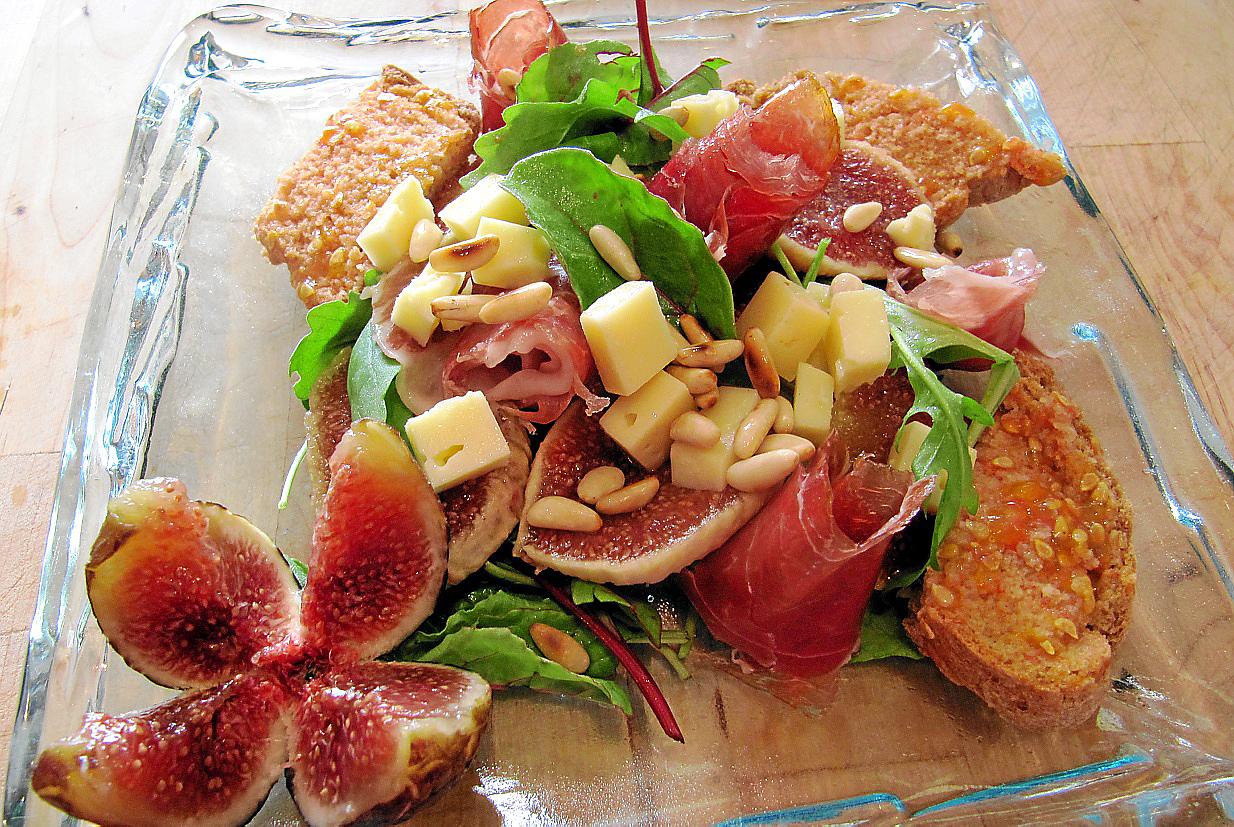 Most of us do not have access to a field of fig trees in the late afternoon or at any other time, so we have to buy our figs at market stalls or in supermarkets. Figs are not good travellers, even on the short journey from the market to the table, so be extra careful and buy only those that are unblemished and not over-ripe. If I am buying a kilo, I ask for them in two half kilo bags and I take them home in a bag on their own. If you get even a kilo of figs in one bag, the pull of gravity on those at the bottom will be enough for a few of them to be slightly squashed, no matter how carefully you carry them.

Most Majorcans use fine fresh figs as a dessert fruit: on their own and with no embellishments of any kind. With such a superb fruit, that is certainly a most memorable way of eating them. However, fresh figs can be used for interesting cold and hot dishes that don’t involve a great deal of work.

One of the simplest ways of using them is as a starter with extra-thin slices of Iberian cured ham. But don’t serve them slice down the middle with the cut side up, which has become a culinary cliché. A much prettier way of presenting them is to make two cuts into the ripe but firm figs without going down to the base. The wedges can then be pulled apart gently so that the fig resembles a flower. Serve them atop paper-thin slices of Iberian cured ham.

Peel the figs carefully and cut them in two lengthways. Wrap each half in a slice of ham and arrange on a plate. Put the stock into a small saucepan or frying pan, add the crumbled gorgonzola and stir over a low heat until the cheese melts. Add the cream and the parmesan, stirring constantly. Season to taste with ground black pepper.

When the sauce comes to a simmer, spoon it over the ham-wrapped figs, sprinkle with chopped parsley and serve immediately.

An interesting warm salad can be made by cutting figs in two lengthways, grilling them for a minute, topping them with very thin slices of feta cheese and grilling them for another minute or until the cheese is nicely warm. Serve the figs on a bed of rocket dressed with virgen extra olive oil and sprinkle the surface with crisply-fried slivers of Iberian cured ham.

I seldom eat desserts and I make them on even fewer occasions, but when I do they are always simple ones such as this roast fig bruschetta. You will need: 80grs butter, 1tbsp ground cinnamon, 4 thick crustless slices from a Majorcan country loaf, 2 tbsps sugar or to taste, eight figs and some crème fraîche. 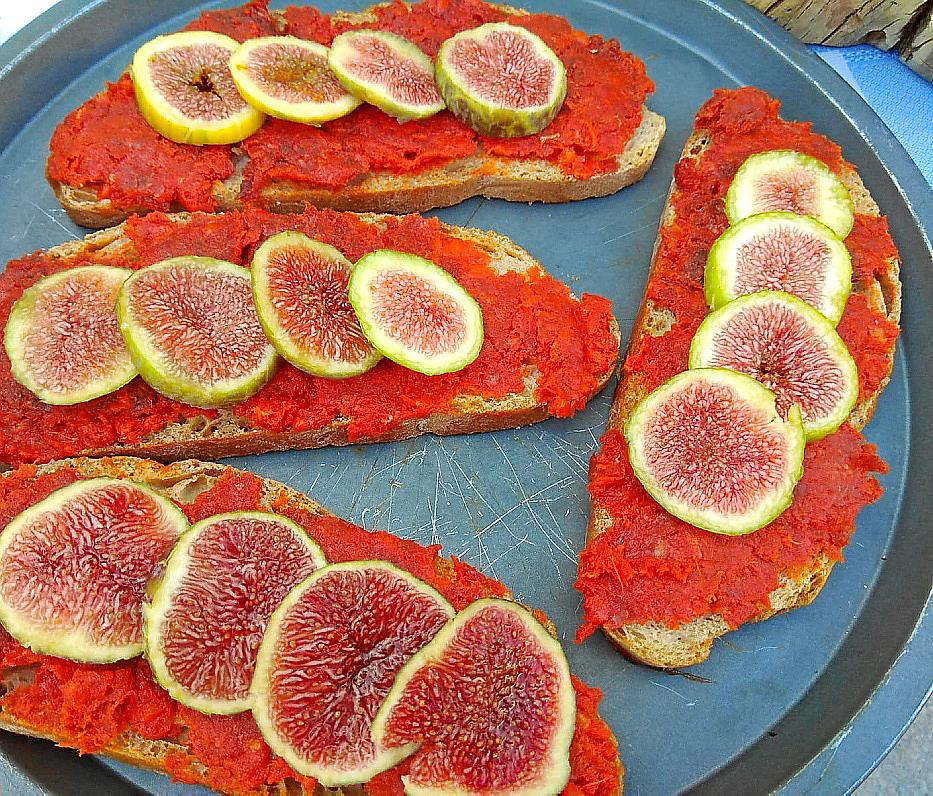 Another roast fig dessert makes use of spices, herbs and honey. You will need: 3tbsps runny honey, walnut-size piece of butter, 1tbsp Cointreau, half tsp ground cinnamon, 12 ripe figs and 1 tsp thyme leaves. Put the honey, butter, liqueur and cinnamon into a small saucepan, heat gently and stir until the butter is well blended with the other ingredients.

Using a small sharp knife, make a cross at the top of each fig, cutting half way down to the base. Place the figs upright in a suitable oven dish, slightly opening up each one as you go. Pour some of the honey-butter mixture into each fig and roast for about 10 minutes at 200C.

Sprinkle a few thyme leaves over each fig and return them to the oven with the heat turned off and the door slightly ajar. Serve after another 5-10 minutes.

The fig was one of the four basic foods of the ancient Mediterranean, along with the olive, the grape and wheat. Fig trees have been cultivated for more than 5,000 years and although they are very much associated with the Mediterranean and biblical times, they were almost certainly first cultivated in Asia Minor where they grew wild.

The tree spread from there into the Mediterranean region and as far north as Germany. The Romans had more than 25 varieties, although Apicius in his compilation of aristocratic recipes (the oldest cookery book in existence) has no recipes for fresh figs and only two in which dried figs are used.

This doesn’t mean we eat the insect with the fig. By the time the fruit is fully grown and ripe, the insect has long since decomposed and disappeared. But if the insect is a pregnant female, it can leave it eggs inside the fig and they can eventually turn into larvae.

For that reason, many people (I am one of them) split open the fig to make sure here are no larvae inside. However, in more than 55 years of eating fresh figs I have never seen any maggots. Some varieties of figs nowadays don’t need the fig wasp for pollination.

A mature fig is botanically not a single fruit but some 1,500 fruits which we think of as seeds — they are the flowers we never see. There are male and female flowers but they cannot pollinate because they mature at different stages — which is why they need the fig wasp to do that little job for them.

If eating together is sexy (and it is when then other person is someone you fancy) then certain foods fall into the same category — and I don’t mean the so-called aphrodisiac fare. There is no such thing as a natural food or drink that will increase our libido — unless we THINK it will turn us on. It’s all in the brain, not the food.

However, some summer fruits are especially sexy partly because of their lascivious exterior shapes and suggestive interior forms, but also because of the sexual associations and the folklore that surround them. Most people consider the fig to be the sexiest fruit of all.

The fig tree is the first one mentioned in the Bible and fig leaves sewn together helped to cover the nakedness of Adam and Eve. Because of this story in Genesis, the fig has always had an undeniable air of sexuality.

In some languages, including Mallorquín and Italian, the word for fig even means the female genitals. This created a problem for Italian lexicographers. In the Italian language a tree is usually masculine and its fruit is feminine.

As the Italian word for a fig tree is ‘fico’, the word for fig should be ‘fica’ — and that’s what put the Italian lexicographers into a quandary. In Italian slang the word ‘fica’ has always been a popular name for the female genitals.

The dictionary compilers took the easy way out: they called the fruit ‘fico’, just like the tree. When foreigners call a fig a ‘fica’ in Italian company they always raise a big laugh.

The word for fig in Mallorquín is ‘figa’ and it can also mean the female genitals. But that didn’t represent any kind of difficulty for Majorcan lexicographers. They are more down to earth that their Italian colleagues and didn’t change ‘figa’ to ‘figo’

Why do ‘figa’ and ‘fico’ mean the female genitals? The next time you have a fig at hand, cut it in two lengthways, hold one half vertically between thumb and forefinger, and gently squeeze the sides. That’s why.