Walking out in Alcudia

Down the years, councillors protesting by walking out of council meetings has been an art most perfected in Santa Margalida. Outbursts there are at all council meetings, but they rarely prompt councillors to leave the building. Or, in the case of Alcudia, leave the chamber and mill around in the town hall reception area - at an appropriately safe distance, one trusts.

Things haven't been too smooth in Alcudia of late. Gone is the harmony of lockdown when councillors from all parties appeared to be so much on the same hymn sheet that Vox could express its praise for the efforts of a PSOE councillor. The new normal has ushered in a more contentious era, Podemos having denounced the "undemocratic, authoritarian and discriminatory" attitude of the mayor and councillors now vacating their seats and abandoning the chamber.

Concepción Baleato of Podemos was one of the councillors who stayed put during Monday's council meeting, but she nevertheless voiced her criticism about what had prompted the PP, Ciudadanos, Vox and Unió per Alcudia to walk out. In all, therefore, six councillors staged the protest, 50% of these six being the PP.

This all came about because a PSOE councillor, Gabriel de Hevia Aleñar, was to become a councillor with "exclusive dedication"; in other words, a councillor on full pay for having executive responsibilities. This full pay amounts to some three grand a month, or just over forty grand a year because of the "bonus" months.

Fina Linares, the PP's spokesperson, led the charge. "Given the financial crisis that the municipality is suffering, this is not the time to be setting up more handpicked officials. It is a disgrace and an outrage ... that the town hall government is adding more salaries." Azahara Machado of the Cs believed that it was "lamentable" that an image was being given of prioritising salaries ahead of the real priorities - dedicating all possible funds to mitigating the effects of the crisis. The 40-odd thousand could be used for spending on the welfare of the citizens.

It was seemingly left to Concepción of Podemos to suggest that let's just get this straight. The salary for the councillor "masks" the fact that he has quit as technical secretary at the Council of Majorca's finance and public function department.

Gabriel, both with and without exclusive dedication, is the councillor for trade and economic development. He is also councillor for fiestas, which - let's be honest - haven't been requiring a great deal of organisation. Leaving fiestas aside, the responsibilities aren't unimportant. They aren't at the best of times; and these are not the best of times. In addition to these responsibilities, he will be taking care of functions related to the personnel department which are to be delegated by the mayor's office. Concepción suggested that the salary was in fact being justified by the delegation of something for which the mayor, Barbara Rebassa, has responsibility.

Defending his salary, Gabriel has said that he gave up his job at the Council of Majorca so that he could be fully available to the citizens of Alcudia. It will be a challenge, he added, in managing the personnel department. So, it would seem that it isn't just a case of some functions being delegated: it's the whole lot.

Adding another councillor on full pay, especially at the moment, doesn't look good. I would think that even supporters of the administration, and especially of PSOE, would accept that it doesn't. However, as ever when the issue of councillor and mayor salaries crops up, it is necessary to consider what the responsibilities are. Fiestas we can forget about, but as noted, trade and economic development are important for the local economy. As for the personnel department is concerned, as far as I'm aware the mayor doesn't have exclusive dedication. In a sense, she is only part-time. If there is as much of a challenge as is being suggested, then there probably is a justification for delegation.

Perhaps the real problem with this and other examples, not least the rows over councillors' pay in Pollensa, is that the citizens never really know what councillors do on a day-to-day basis or what results they achieve. Maybe if there were greater information and greater transparency, there could therefore be greater scrutiny but also greater understanding.

In the scheme of things, another 40,000 euros for a councillor's salary isn't a huge amount. Not when you consider that Alcudia town hall has something in the region of 90 million euros sitting in the bank. This cash, accrued from budget surpluses, has had to stay in the bank because of Spanish law for budgetary stability, which restricts town hall spending.

However, there is to be a relaxation of the regulations. Earlier this week, Spain's finance minister, María Jesús Montero, announced that there would be a suspension in respect of surpluses from 2018 and 2019. This announcement followed the Spanish government's defeat in Congress; deputies voted against the proposal that town halls should lend the government cash from their surpluses.

The fine print of the Montero announcement would appear to indicate that of the 600 million euros that Majorca's town halls have in the form of budget surplus cash, slightly less than a third of this will be cleared for spending. This being so, the implication would be that Alcudia, which has far more cash in the bank than any other town hall, would be able to free up around 25 or 30 million. Mayor Barbara Rebassa hasn't ventured to give a figure as yet, saying only that the government's decree to permit the spending will represent a "respite" for the town hall.

She, like all mayors in Majorca regardless of their political affiliation, still wants the government to scrap the law so that town halls are free to spend all their surplus cash.

Joan Monjo in Santa Margalida is reserving judgement on the government's announcement. He wants to be able to read the proposal thoroughly, stressing that the Ley Montoro (named after Montero's predecessor, Cristóbal Montoro) should be repealed "once and for all". It was Montoro of the PP who brought in the budgetary stability legislation. 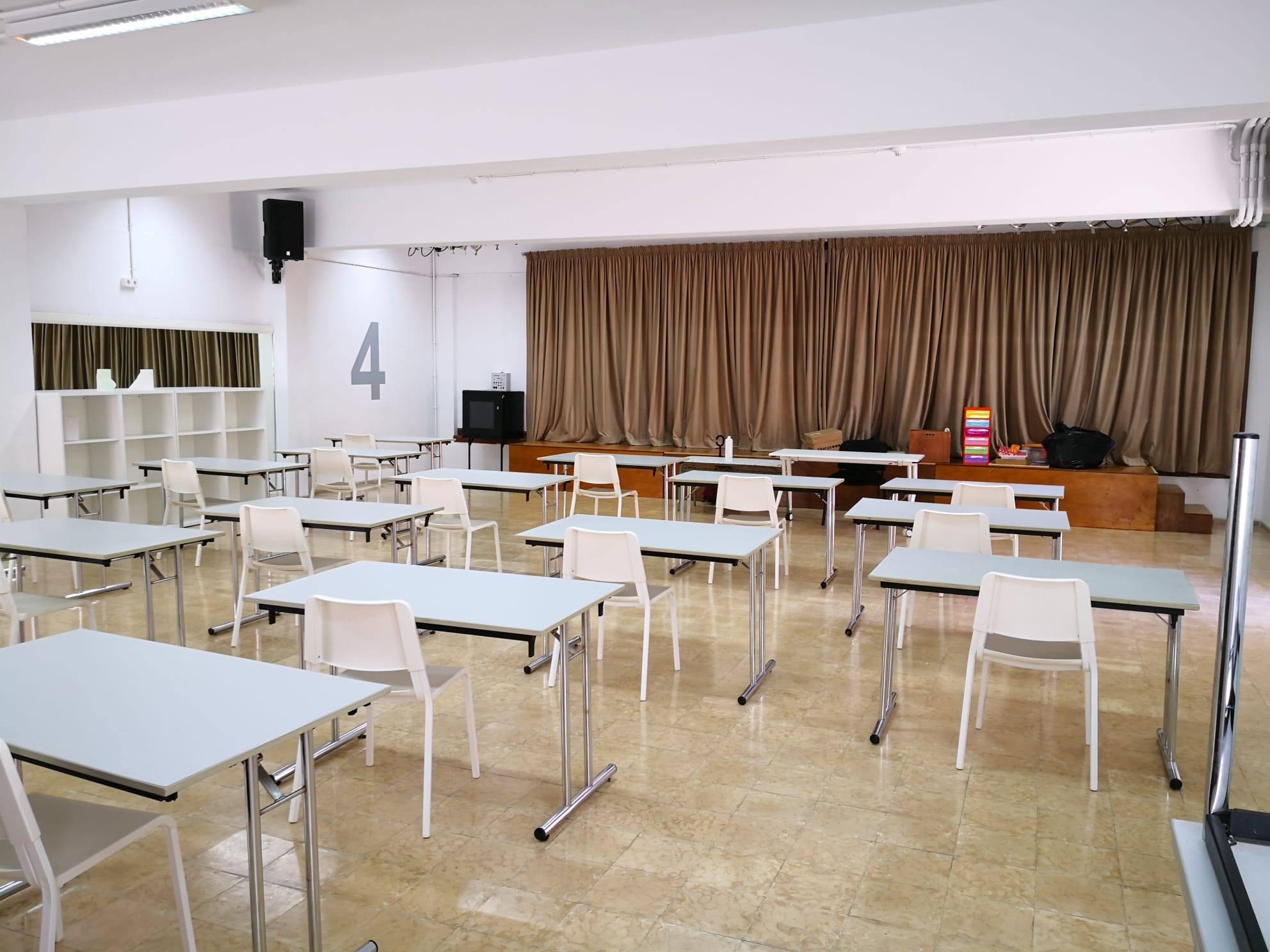 In order to provide adequate classroom space in accordance with safe distancing regulations, town halls have been making various facilities available. Some classes have to be held away from schools, which don't have the rooms to satisfy the requirements and to keep class sizes down to the 20 for primary pupils and the 15 for secondary pupils, who are attending classes on alternate days (there is remote teaching on the other days).

In Alcudia, one of the facilities is the Casa Cultura. The main hall and another room are to be used for classes. This is going to mean, if it hadn't been pretty obvious anyway, that the hall will not be being used for meetings, dance lessons, yoga, theatre and whatever. On a personal note, this affects Nomads. It had struck me some time ago that a production next February would not be feasible. Apart from any issue with audiences (and what may or may not be the rules by then), there has been all the business with how many people can gather, so therefore rehearsing, to say nothing of sanitary control - constant disinfection. All sorts of groups use the hall and the rooms, and they have swipe cards to let themselves in.

Anyway, no production had been decided upon or planned, so unless there is a dramatic (sic) turnaround in the health situation, it'll probably be the case of working towards 2022. 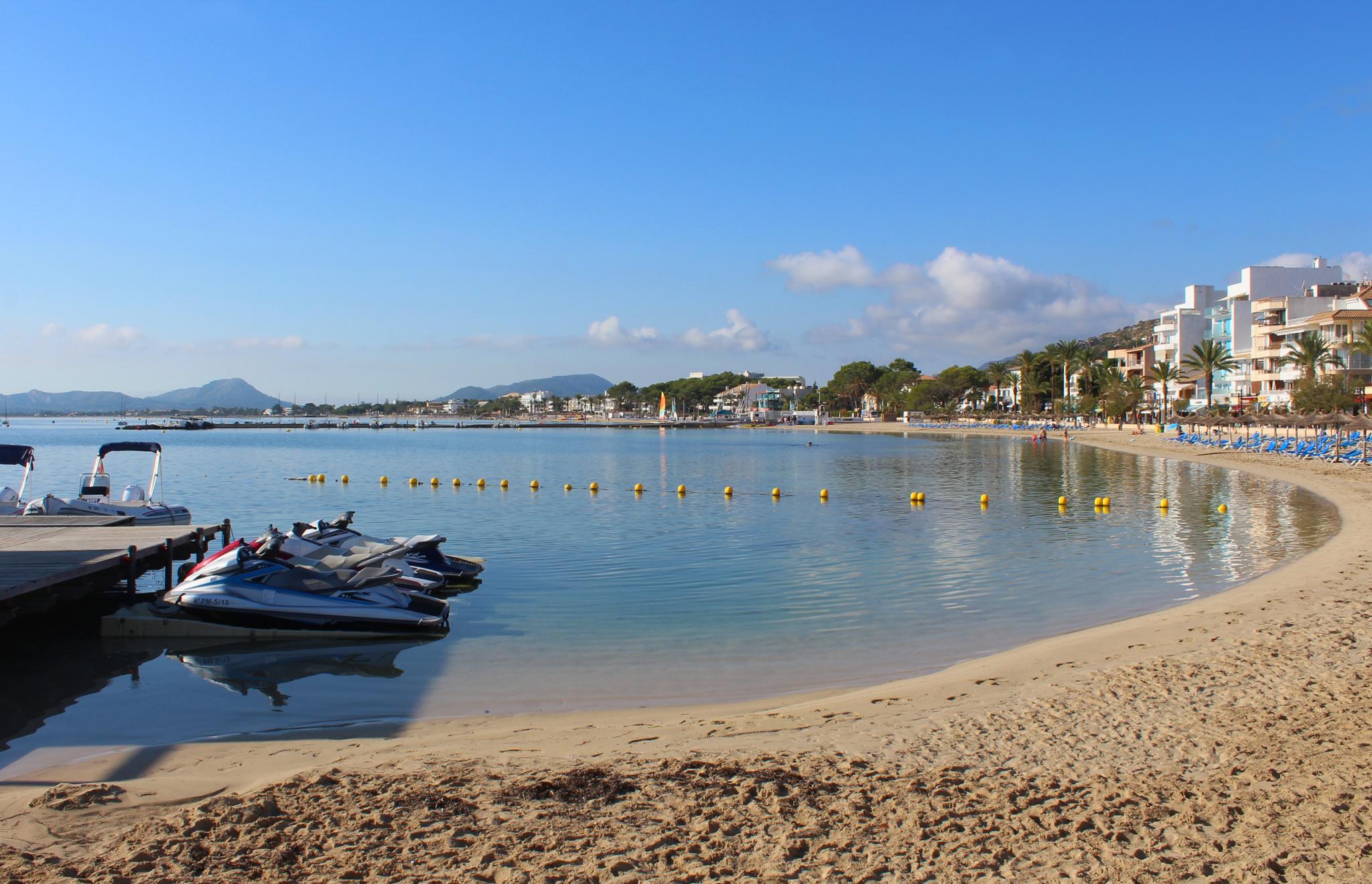 A plan for Puerto Pollensa's water

With much recent attention having been focused on untreated water spills in Puerto Pollensa, the opposition Junts Avançam have come up with a proposal for an integrated approach to try and solve the longstanding problems.

Junts attribute these problems to an historical failure to establish adequate sewage and drainage infrastructure to keep pace with urban development; to the existence of septic tanks; and to the torrents and wetlands. There is certainly at least one example I can think of where the torrent is underground. All of this, Junts reckon, has combined to create the problems.

The party therefore wants a project that will deal with the entire network of faecal water and drainage. For rainwater, there would be a project to include the torrents which carry water from the interior of the municipality as well as from the surrounding mountains.

Junts say that the reality is that old sewers converge in the port. The system has been renewed bit by bit, but there are parts where the rainwater pipes are separated from the sewage pipes and other parts where there isn't separation. 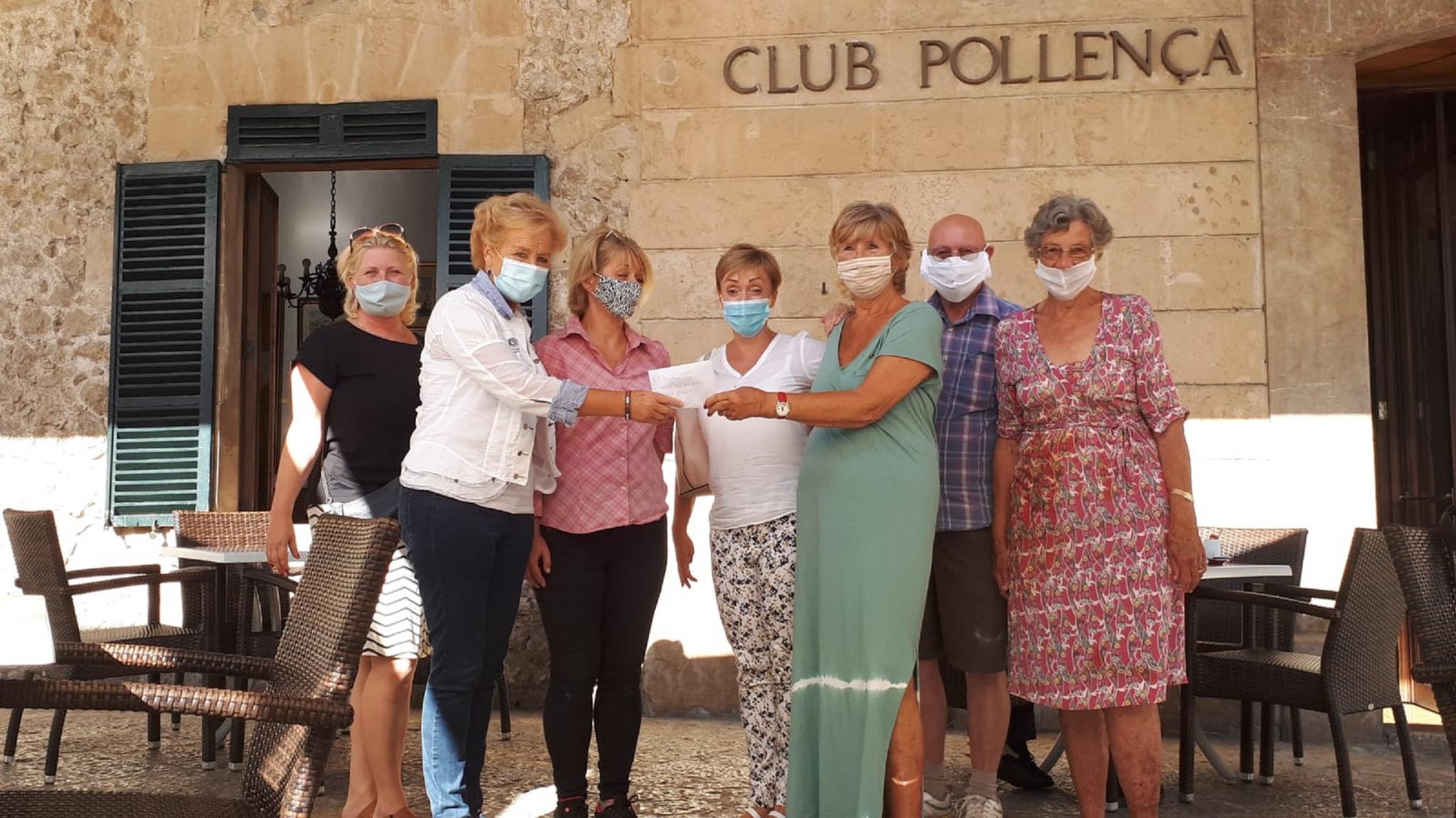 Last week, N2 Productions donated 297€ to The Lions Pollensa branch for their domestic violence fund. After expenses had been paid, N2 Productions were able to donate this and 350€ worth of products to the Food Bank in Pollensa from the advance tickets sales from The Thrill of Love that was scheduled for March but had to be postponed due to the Covid restrictions.

The Thrill of Love is the story of the life of Ruth Ellis, the last woman to be hanged in England in 1955. The play is set in the London clubs in the 1950s and is set to a wonderful Billie Holiday soundtrack. The play is both funny and thought-provoking. N2 Productions still hope to go ahead with the production in 2021. 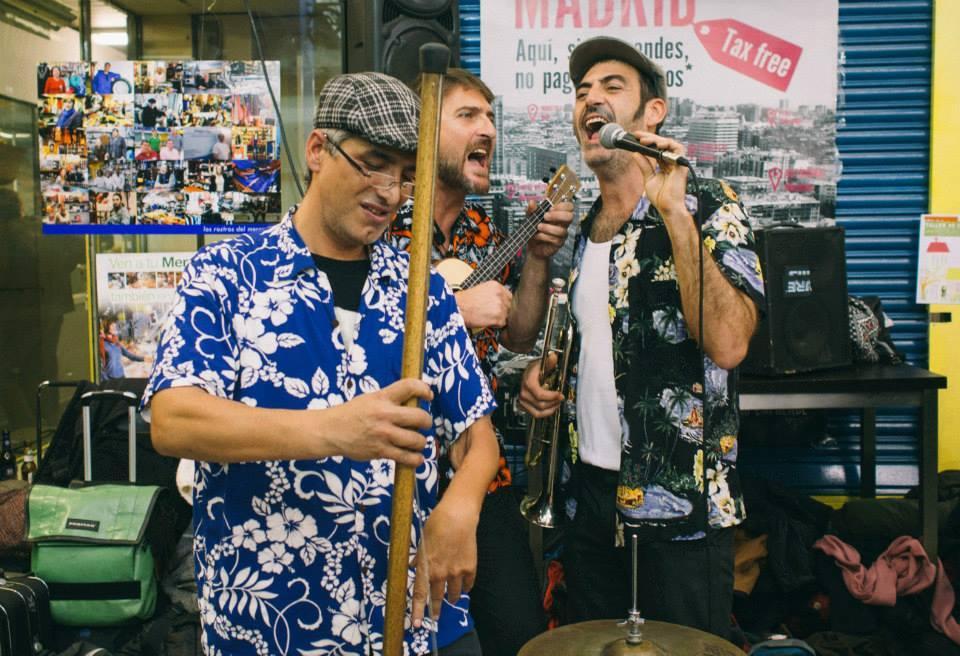