Last week I promised you a review and report on the Classic Car Club rally taking place at the end of September. But many of the possible contenders needed more time to get going. You know how some people are when they don’t have a deadline. Being rather a considerate chap, the organiser, Gaston Westphal, extended the entry window. So basically the rally isn’t finished yet so we don’t know who did what, or where. Let alone who won. We’ll get to that in the next couple of weeks. 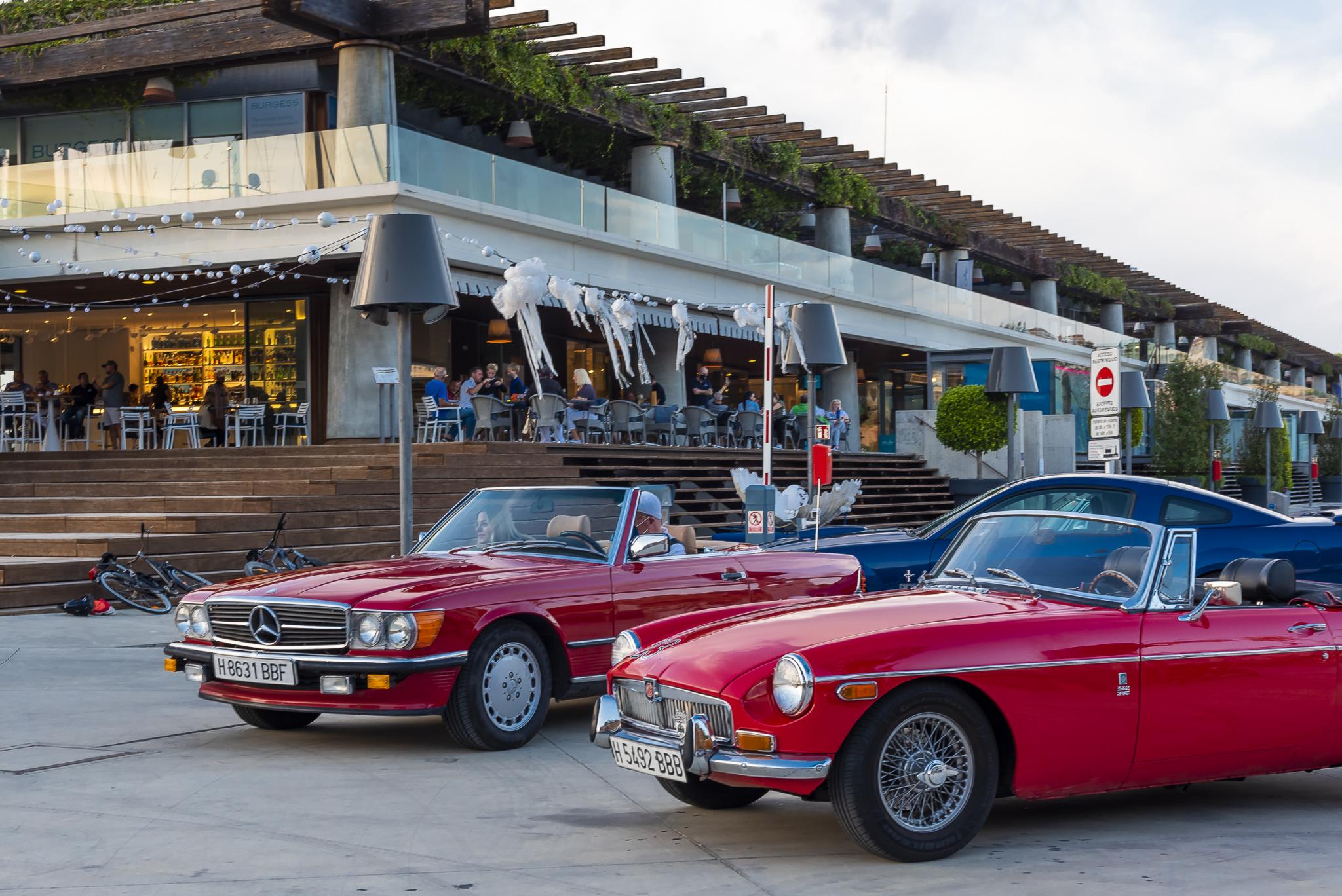 However there has been more going on in the Majorca petrol head world over the last week. Since the closing of The Boat House until next season the search for a new weekly venue has been going on behind the scenes. Believe me it’s been exhausting and hard work going from bar to bar on the waterfront. After the beers mounted up we came up with a shortlist. It’s not called a shortlist for nothing by the way. After test driving the new Blue Nest in Port Adriano we rather liked the setup. Especially when Port Adriano allowed us to park up on the private apron adjacent to the bar and waterfront. Perfect, we’ve struck lucky. 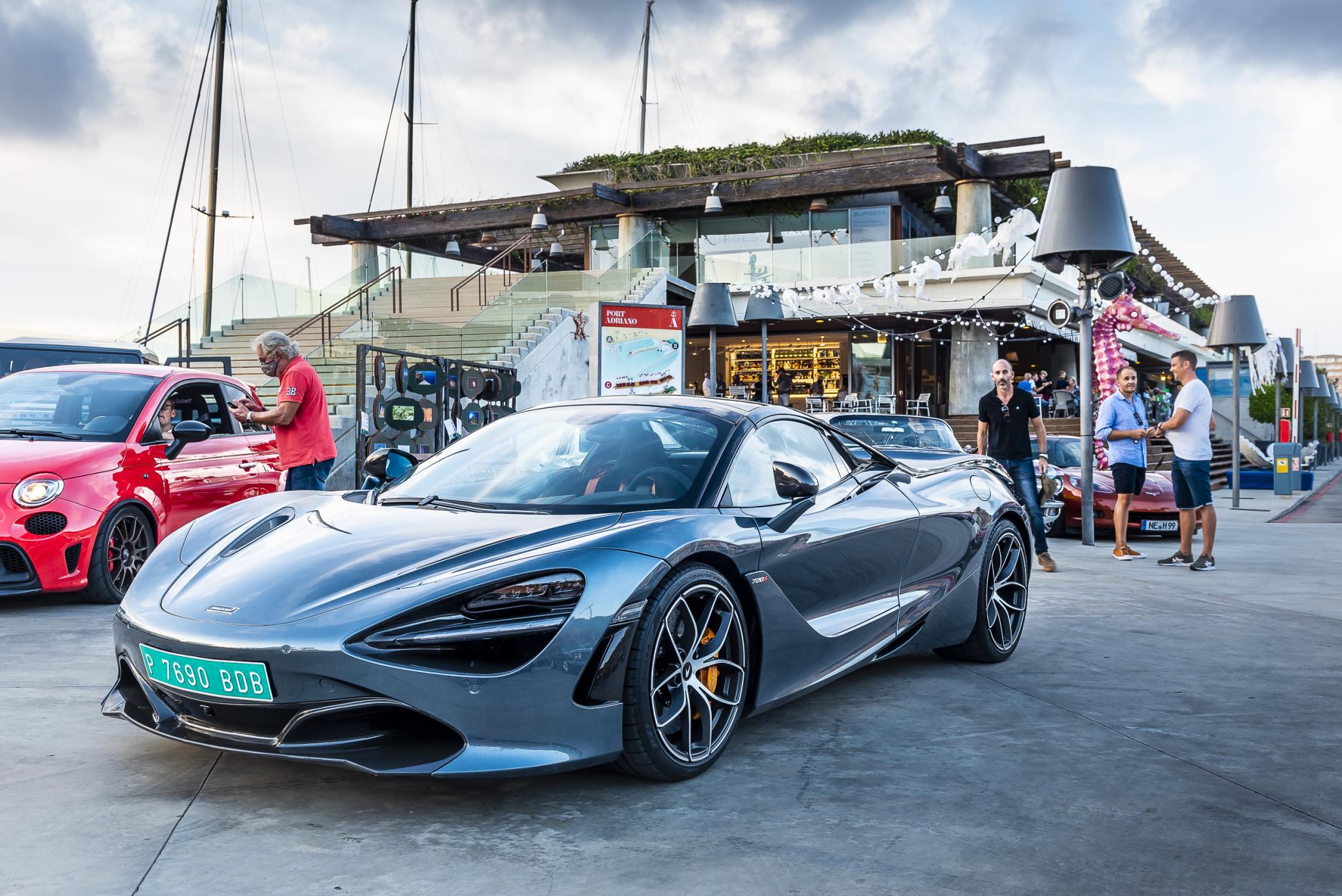 So a few of us turned up last Thursday evening and brought 30 cars with us. That’s a nice turnout. Interesting cocktail of classics and modern classics with the odd supercar thrown in. In this case a McLaren which turned out to be our centrepiece for the evening. Rather nice set of doors which swivel up rather than out. With those open and the roof half up, the transformer look is complete. When all is shut, the svelte bodywork oozes aerodynamics. I guess it’s fast. 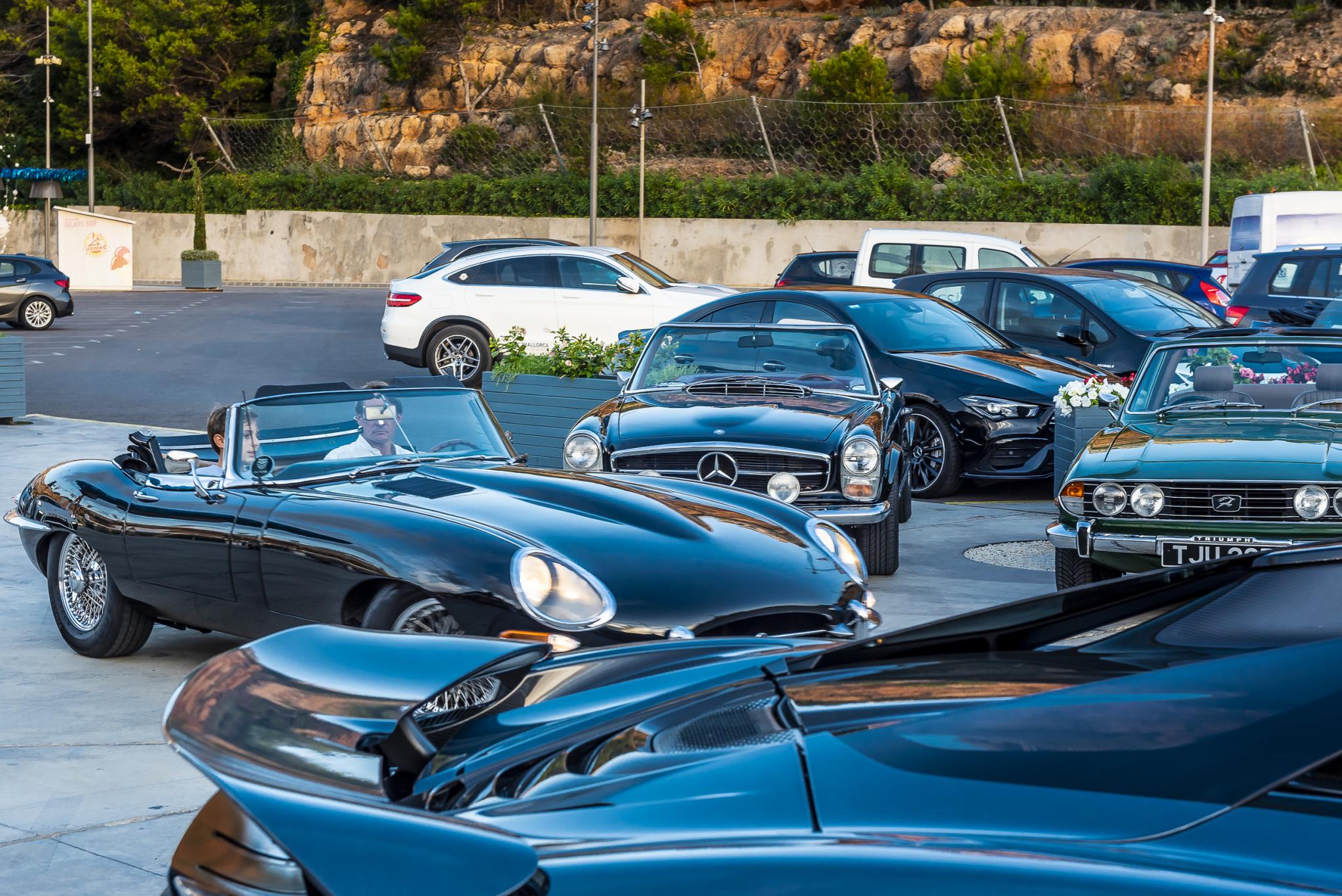 Another quick one, relatively speaking, was an all electric Mini Cooper. I still find it weird to see these machines, adorned with a chequered roof and all the race bits, glide up silently. Instead of roaring in. The owner rather likes it although he did call it a fridge, I think that was lost in translation, he meant appliance. More like an appliance for getting around than a car in the traditional way. The owner has a Morgan too to get his petrol head kicks. 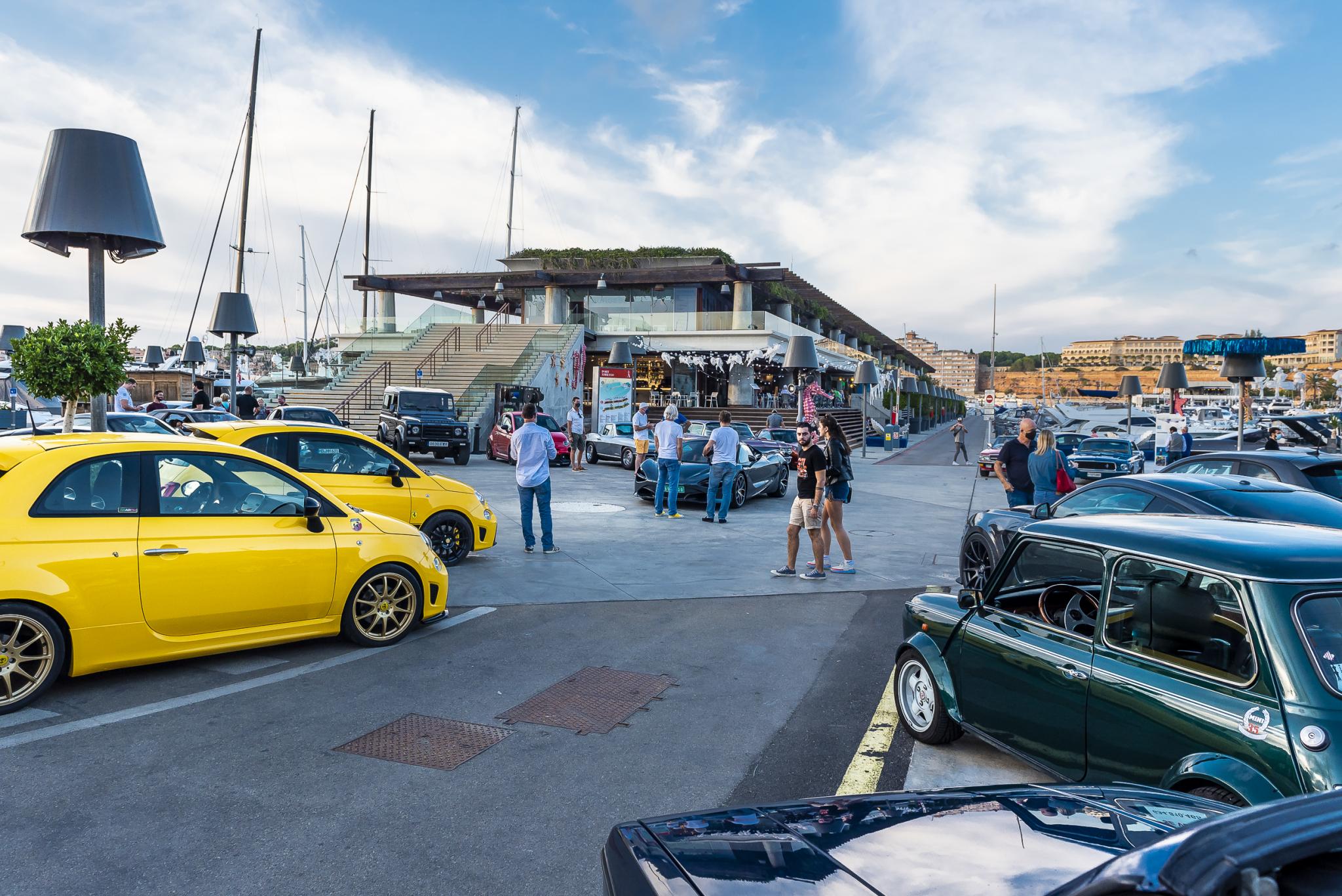 Mind you, the all electric Mini is quick and very civilised. Something just over 7 seconds to 100km/h with a range of about 200km. As he said, that’s plenty for Majorca but not so great for a drive across Europe. Strange to think the name (John) Cooper is now used on an electric car. He used to tune Mini carburettors, install big valve heads and big exhausts. I wonder what he would do to this one? Install a bigger fuse I guess. 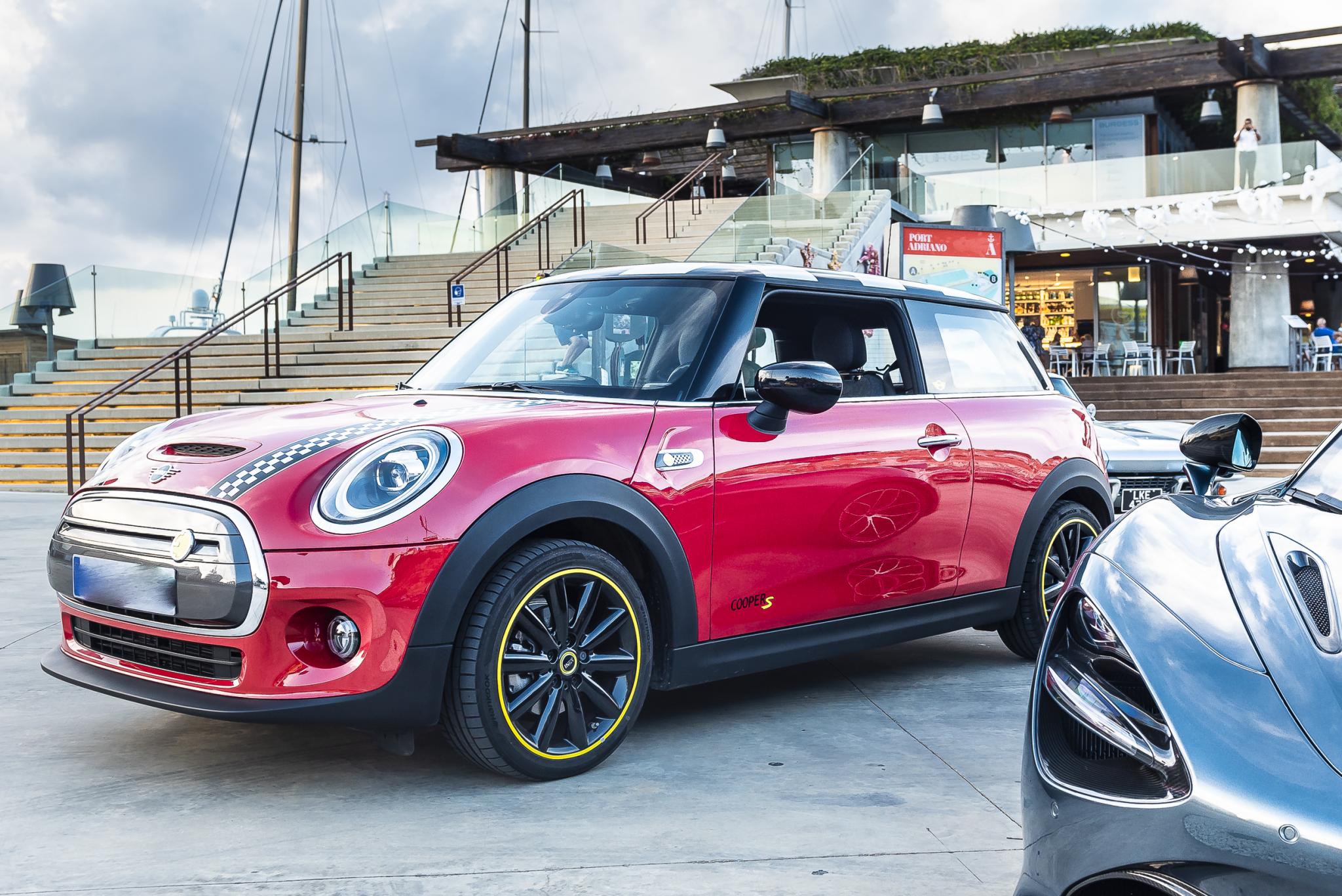 Something else interesting, that’s apart from the other 29 interesting cars there, was the Alfa Romeo 4C. This is one of the models bringing Alfa back from the brink. For a long time Alfa looked like being consigned to the great breakers yard in the sky. The 4C is rather funky and great looking in the genre of compact seriously low sportsters. So low that the owner says you can see ‘not a lot’ out the back window which is almost horizontal. And there’s a small spoiler just to finish that job totally. Still, I guess you’re mostly going forward propelled by 240 horsepower from the 1.7 litre four cylinder turbocharged powerplant. 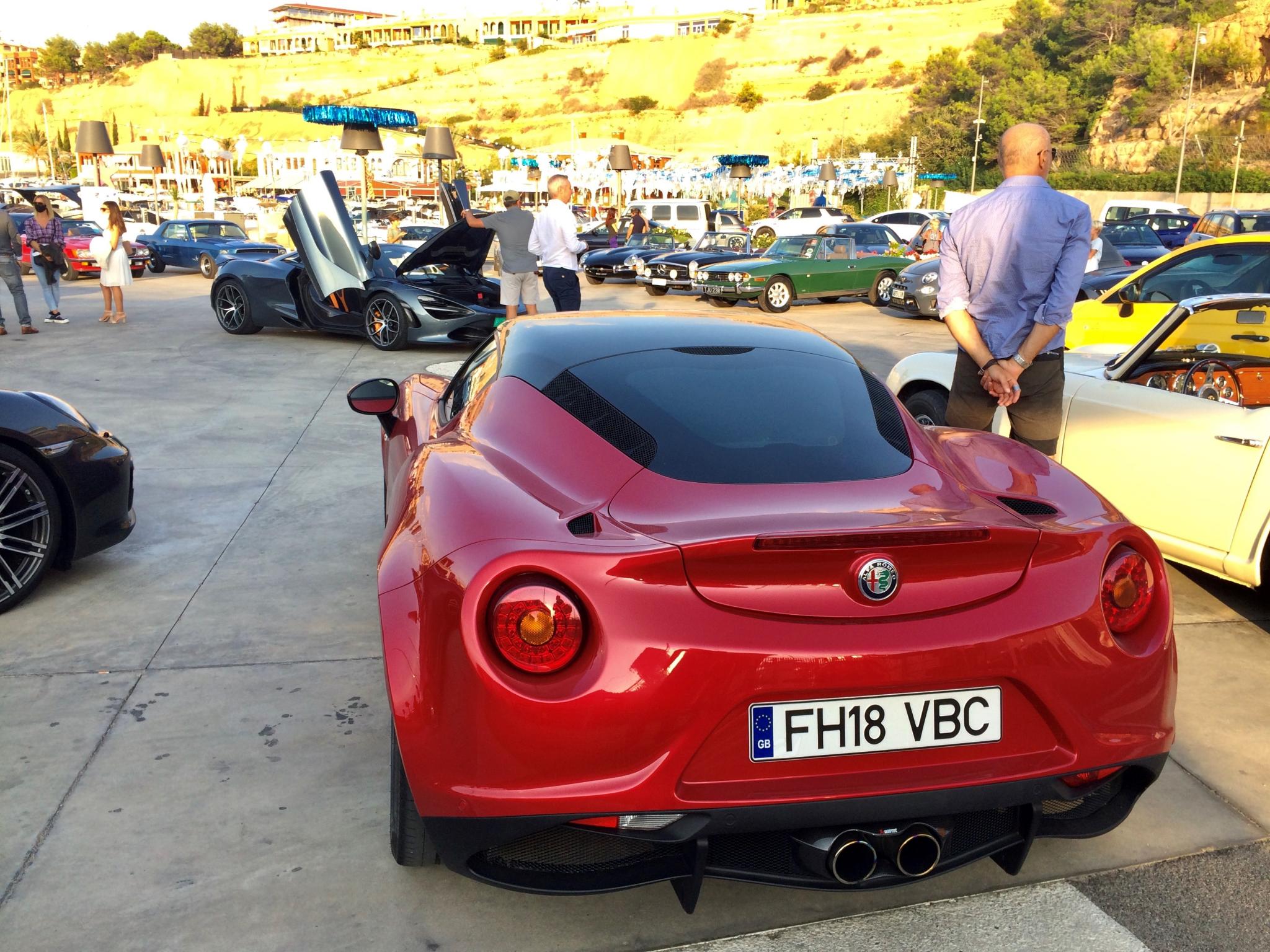 So onwards we go, trying to live the new normal as best as we can and in this case rather enjoyably. See you next week, stay safe.