Interview with Julian Looman from The Mallorca Files

"It’s wonderful to be back"

Q.— How does it feel to be back working on The Mallorca Files?
A. — “I spend six months of the year on Mallorca and my family and I have built a life there, so it’s wonderful to be back – like coming home. The fact that the cast and crew all have a great chemistry on set only increases the enjoyment of being back. Everyone is friendly and warm - the island and its people; the crew, and my partner in crime, Elen. It’s everything I could ever wish for.”

Q: Have you been surprised by the show’s success in the UK and internationally?
A: “You know, the success of the show is something we all hoped for but could never guarantee of course. All we could do to was to work hard and try to put together the best episodes we possibly could, and then hope that people like spending time with Max and Miranda on that beautiful island. Luckily, that seems to have worked out.”

Q: How do you get back into Max?
A: “There’s nothing in particular I do, because there’s an essence of Max that’s already such a part of me. It doesn’t require a lot of transformation. Ironically, it was actually more difficult to get rid of Max for the other parts I’ve played when not working on The Mallorca Files.

It also helps to be on the island again: to see the sun, the palm trees and to be on the streets of Palma. The surroundings definitely make a difference. I think Max would be a completely different character in, say, Munich!”

Q: How has Max’s relationship changed with Miranda in this season?
A: “In season one, it often felt like Max and Miranda worked separately and would investigate the crime in their own way. In Season Two, Max and Miranda have accepted one another for who they are and respect their differences; they realise that the things that used to irritate them actually make their partnership stronger. They now act more like a single unit as they team up against the bad guys.”

Q: This season, Max seems to be more assertive than he was. Do you like that he’s more physical?
A: “Yes, we’ll see him stepping up to the plate and taking more responsibility for the detective work. This time round we’ll see Max physically taking down criminals and saving the day as well. In earlier days he wouldn’t’ have got as involved and now there are moments where he is prepared to be as assertive as Miranda. And, of course, it’s a lot of fun to shoot that kind of action sequences.”

Q: We also see him claiming to have more talents – football, horse-riding – than he actually does. Why does Max do that?
A: “Max is an eternal optimist and always believes that he can handle whatever’s thrown at him: if there’s a horse he can ride it; if there’s a penalty shootout he can score the winning goal; and if he’s at the opera he can sing an aria. He has almost no vanity, so he always loves to try – even if he fails. He’s convinced that a positive mental attitude can work wonders and that - even if he does fail - he will fail better mnext time. It’s kind of a survival strategy for Max, but I think that’s very endearing about him.

Obviously, he also uses it as a tactic to make Miranda laugh and help her relax more.”

Q: Have you enjoyed the meatier storylines this season?
A: “Totally. If you think about it, season one was all about exposition: we needed to establish the characters, their personalities, and their motives in order to make viewers familiar with Max and Miranda. Behind the scenes it was also a learning experience for us all.
Season two means we can get into the storytelling proper, and I really like the direction we’re taking. It’s the perfect blend of interesting stories that entertain viewers for 45 minutes at a time. Sometimes those stories are light-hearted; but sometimes they are a little darker, too.

And, of course, this year we have some amazing guest stars. It’s been an honour to have the likes of, for example, Phil Daniels join the show and to be a focus for an episode.” 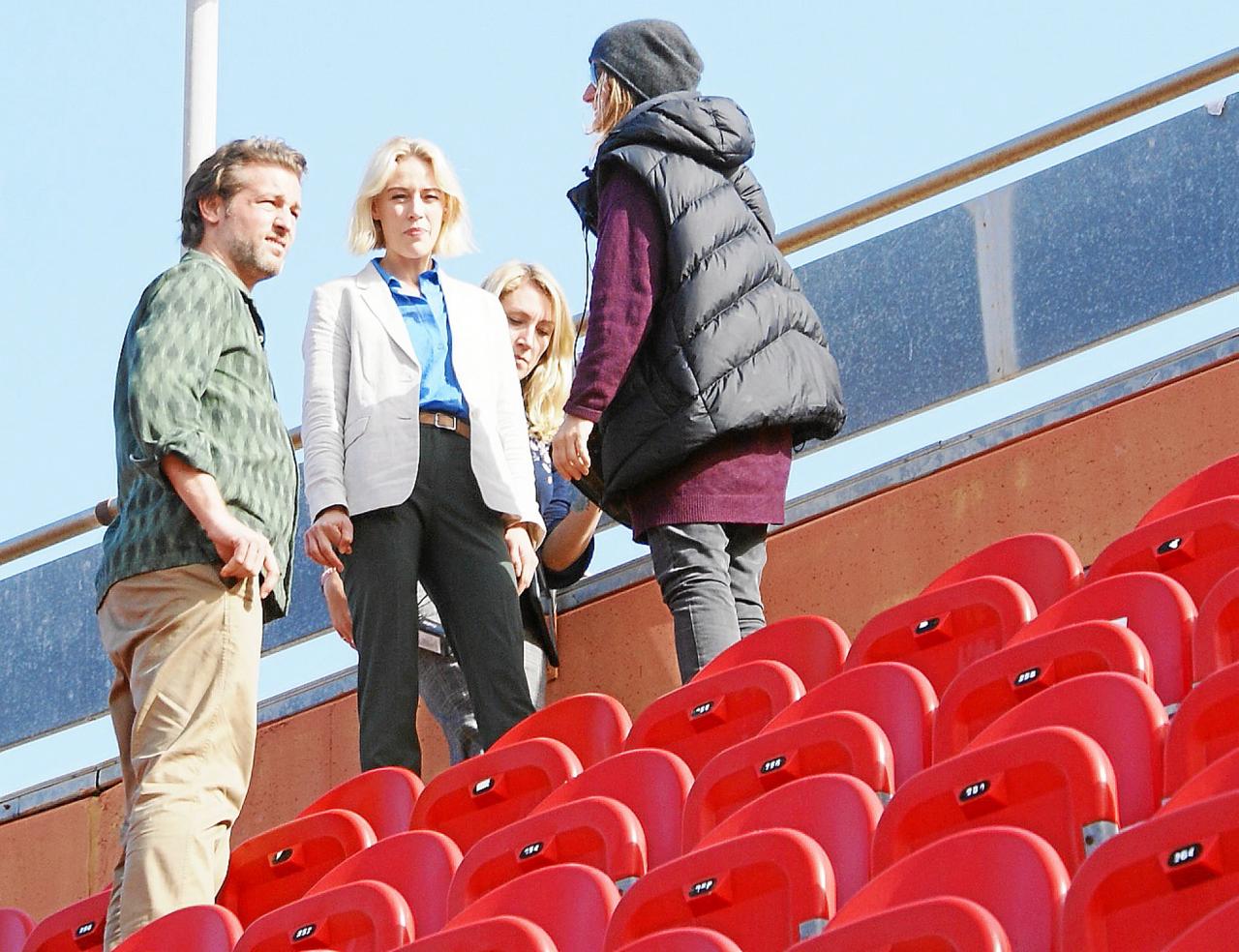 Q: What’s been your favourite scene this season and why?
A: “I really enjoyed filming at the football stadium in the episode Beautiful Game. We shot the scenes during a live match between Real Mallorca and Valencia. It was so nice to be in a nearly sold-out stadium. At half-time we were given permission to film a fantasy penalty shoot-out on the pitch. Where else would you be able to do that?

We only had twenty minutes to get that shot, so it was pretty stressful, although I really enjoyed that pressure. I’m not sure the fans knew what was happening, but they were super supportive. It was incredibly special.

Other than that, I enjoyed filming the episode A Dish Served Cold. I am a total foodie.
I love that world of restaurants and Michelin star chefs. And the locations in that episode are absolutely amazing.”

Q: What have you missed most about not being on Mallorca?
A: “I’ve missed so many things. The island for a start. I went back to Mallorca a few months ago because travel restrictions had been lifted and I needed to pick up some of the belongings I had to leave behind when we had to leave in March. As I was taking a cab from the airport to Palma, we passed the beautiful cathedral opposite the harbour and I just burst into tears. I hadn’t realized how much I missed Mallorca.

The weather and setting: it’s a remarkably simple thing, but it does something to your soul when you see a palm tree every day or feel the sun on your skin – even in winter. It’s obviously not as hot as in the summer, but it still makes your skin tingle. Also, the whole lifestyle in Palma is wonderful – the cafes and the narrow streets. When you’ve been there for a long time you start to develop routines and I miss my morning stroll and coffee in a particular café.

I also miss being part of an international cast, speaking English and seeing the friends me and my family have made. My son was in a Spanish nursery while we were on the island, and it was such a luxury to be able to offer him the opportunity to learn and hear new languages.

And because I’m such a foodie, I have to add that I miss the padron peppers you get as a side dish with every meal, and the amazing steaks and meat that you get on the island. I only ever eat steak when I’m on Majorca.”

Q: What’s it like to act in a non-native language? What preparations do you do when you get your script?
A: “What really helps is that I’m not expected to speak without a German accent. That takes off a lot of pressure – I just talk as I talk.

English not being my first language also liberates me from over thinking about how to deliver the lines. The non-awareness of the multiple possibilities how to say that line in English is also an advantage sometimes. Just say it, just act.

So acting in a non-native language also feels a little bit like hiding behind a mask. I don’t think about it too much and just do it - one of the secrets of acting, I think.

In terms of preparation, it probably takes me about two or three times the effort to learn my lines as it would a native English speaker. As Max’s dialogue is written by English speakers, it, often uses structures that Germans would be unfamiliar with and so I sometimes need to check twice to be sure that I get the meaning of what Max is saying. There’s also specific police jargon such as ‘homicide’ and ‘abduction’ that I hadn’t come across before, so I need to look that up too.

Elen and I will always run lines before any scene and if I have any questions, I will ask her. She is a huge help when it comes to getting my emphasis right. And, of course, we have rehearsals before each scene as well, which helps to nail the dialogue. Help comes from lots of corners if needed.

One goal I had when I got this role was for my accent not to be a distraction for viewers. I didn’t want them to tune out when I opened my mouth, so I’ve tried to speak the best English I possibly can, without too strong an accent. I’ll never be able to get rid of it, of course, but I want it to be good enough not to get in the way of people enjoying the show.”