Real connoisseurs of fish cuisine shun fancy sauces of any kind, frilly garnishes such as sprouted seeds or, which is much worse, the petals of fresh flowers. I’ve seen a picture of a bacalao (salt cod) fillet plainly done by a highly rated Mallorcan cook but decorated with white petals and other unnecessary tit-bits.

The bacalao looked absolutely magnificent on its own and didn’t need the petals or other adornments that were served with it. Some of today’s so-called creative cooks simply don’t know when to stop plating a dish.

But good cooks of yore didn’t go in for such abominations and there are hundreds of recipes from all over Spain, especially the Basque Country and Catalonia, in which pieces of bacalao are fried or done in the oven and presented as they are, at most sitting on pan juices or anointed with them. That’s how the connoisseurs want their bacalao.

One of the most liked versions is the penny plain Catalán ‘bacalao a la llauna’, a traditional Barcelona dish in which a thick fillet of bacalao is floured, quickly sautéed and then finished off in the oven in a tinplate container called a llauna.

It’s a simple name for a very simple dish but it’s one I’ve never ever come across in a Mallorcan restaurant. I wanted to write about bacalao a la llauna for Ultima Hora in the summer of 2019 and that meant looking around for at least one restaurant which had that it on the menu, so readers could go there to try it. I telephoned several places in the Palma municipality but no one was doing this dish. I looked and looked in central Palma and some of the outskirts. Nothing doing.

At one point I thought I had struck gold because one well known restaurant in the Avenidas had it on the menu posted at the door. When I asked a waitress standing behind the bar if their bacalao a la llauna was actually cooked and served in a llauna, she didn’t know what I was talking about.

A cook squeezed past at that moment and she asked him about the llauna. He had never heard of the word either. I explained what a llauna was and the tradition of cooking and serving this dish in its tinplate container.

He said they just did in it a frying pan and served it on a plate. “Why do you call it bacalao a la llauna if you don’t use a llauna?” I asked. “It’s just a name,” he replied.

Well, it’s not just a name, it’s a celebrated Catalán speciality that’s done in a unique way — finished off in a llauna: without one there is no bacalao a la llauna. That meant I had to find my own llauna to make and photograph the dish at home.

When I first came to Mallorca this tinplate oven dish was sold at every ferretería in Palma and also at stalls at the weekly markets in all inland towns and villages.

It is rectangular and about 4 cms deep and Mallorcan housewives used it mainly for baking spongecakes such as bizcocho and sweet cocas, but also as a roasting tin for certain fish dishes and meats. Its rectangular shape made it ideal for cutting sponges into neat squares for breakfast or as a snack with an afternoon cup of coffee.

I expected to find llaunas at the two stalls selling hardware goods at the Mercat d’Olivar — but once again the owners had never heard of llaunas. When I explained and mentioned that Mallorcan housewives once used them for making spongecake, they offered me the shallow moulds for doing thin savoury pastries such as coca de pimientos and other vegetables.

Over the next couple of months friends looked for a llauna in the ferreterías of most inland towns including Inca and Manacor. But no shops, or the stalls on market days, had llaunas.
One day, when walking past Buco Burger in Calle Rubén Darío, where you can get the best deep-fried chicken wings I have ever eaten as well as 10-rated hamburgers, I noticed that people on the terrace were eating burgers and chips and other dishes presented in llaunas

The owner was standing at the doorway and I said I had been looking for a llauna everywhere and couldn’t find one and would he sell me one of his. He went into the restaurant and returned with a llauna, which he called a ‘bandeja’ (tray), and didn’t charge me anything for it. He had bought them at Makro, a supermarket for wholesalers, but had seen them at Chinese bazaars.

On my way home I went into a Chinese shop, showed the owner my Buco Burger llauna and asked if he had one like it. He went deep into the shop and returned with a shiny new llauna. It was made in Valencia and cost me €5.95. It’s a rather sad day when traditional cooking utensils are sold only in Chinese bazaars. 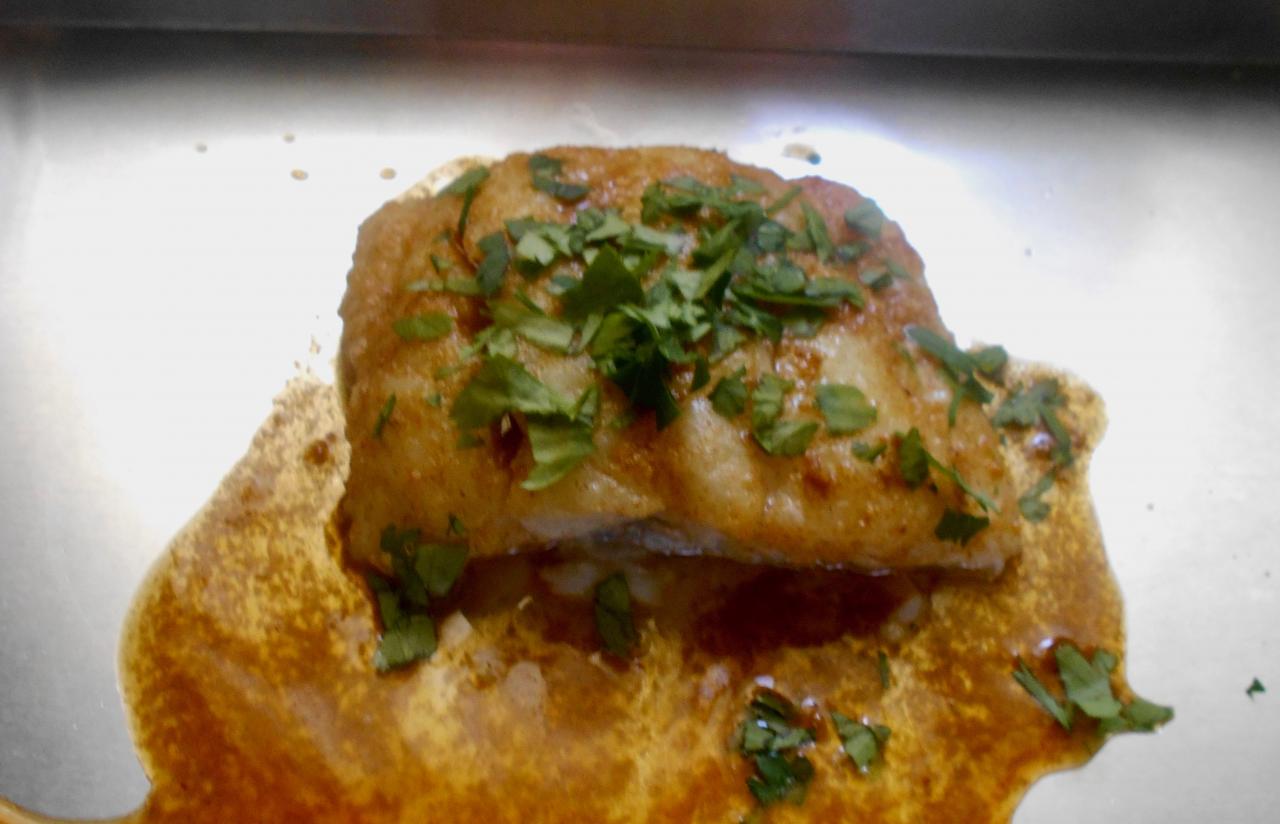 However, I was pleased I now had my special tinplate utensil and could finally make an authentic bacalao a la llauna, a dish that first appeared in Barcelona taverns in the middle of the 19th century.

Recipe for Bacalao a la llauna

Bacalao a la llauna is so simple to do that it can actually be somewhat difficult to get right. Its sheer simplicity means the very best ingredients must be used and that entails buying the best the thickest and most expensive fillets of bacalao you can find. Nothing less will do.

The other ingredients must also be of the highest quality: virgen extra olive oil and the finest pimentón de la Vera (paprika).

Desalt the bacalao fillets by washing them under running water to get rid of any surface salt and then put them into a container in a single layer (skin side up) and cover them with water.

It’s important that the fillets are in a single layer, so you may have to use two containers.
Leave them in the fridge for two days without changing the water.

This first step rehydrates the flesh and helps to bring the bacalao back to its original flexible state. After two days, rinse the fillets under running water, put them back into the containers, and cover with fresh water. Change this water three times a day for at least two days. I gave full desalting details in last week’s Wednesday double page.

Drain the desalted fillets, dry them well with kitchen paper, and dip them in flour until they have a good coating on both sides. Sauté them in 2 cms of hot virgen extra olive oil, two minutes on each side. Transfer them to the llauna, skin side down.

Sauté the thinly sliced garlic in the same frying pan with the same oil over a low heat until they are golden — they must not take on a brown colour. Take the frying pan with the garlic off the heat and wait for a full minute before stirring in the paprika with a wooden spoon. It’s essential that the paprika doesn’t burn, which is why you must let the oil cool down for a full minute.

The sherry or white wine is stirred in immediately and this mixture is simmered to allow the alcohol in the wine to evaporate and thicken it a little. It is then poured over the bacalao fillets in the llauna. The finely chopped garlic and the chopped parsley leaves are sprinkled over the fillets.

The llauna is put into an oven at 190C for seven minutes and the fillets are taken to the table in the llauna. They are served on warm plates without any kind of garnish. Simplicity is the main characteristic and charm of this dish and the bacalao must be served on its own — no potatoes, rice or even a salad. And no pretty little flowers as decoration.