Mallorcans are very fond of most dried fruits

Shakespeare was right (as always) when he wrote “that which we call a rose would by any other name smell as sweet”. A change in a name doesn’t make much real difference, either to a rose or, for instance, to a prune.

Some 20 years ago, the California Prune Board wanted to change the name of the prune to ‘dried plum’ — and spent $10 million on an advertising campaign.

I don’t know if the name caught on in California and elsewhere in the United States, but I have never heard anyone in Britain or Mallorca refer to prunes as anything but prunes. Old habits die hard.

The California Prune Board was trying to do what Americans do better than any other nation: sell more and make bigger profits. However, you can’t really expect people suddenly to start calling prunes dried plums. Britons wouldn’t be prone to calling a prune a dried plum even with a $10 million advertising campaign in their favourite tabloid.

In the old days prunes were very much a music-hall joke, mainly because of their laxative effect. When prunes come up in conversation today, someone frequently sees only their laxative side.

Prunes started to get a better press some 70 years ago when British people discovered the delights of French cooking, partly through the cookbooks of Elizabeth David in the 50s and 60s. She made a fruit fool with prunes and also mentioned a thick, rich and very dark eel stew from Tours that contained them.

Jane Grigson, that other splendid food writer of the 20th century, also wrote about prunes from Tours, with a recipe in which they were cooked in a sweet wine made from over-ripe local grapes. In her book Good Things, there’s a chapter on prunes that includes a dozen recipes, mainly from Tours.

Vegetarians still rate prunes as one of their favourite foods and those who are somewhat constipated still turn to prunes as a natural remedy. Prunes are rich in vitamins and minerals and also have a high fibre content, so nutritionists always recommend them for general good health.

But those watching their weight have to be extremely careful with all dried fruits because their calorific content per 100 grs is in the upper stratosphere: prunes have 255 calories, figs 274, raisins 289 and those thin innocent-looking slices of dried banana pack in a whopping 340.

As we have seen in recent food pages, Majorcans are very fond of most dried fruits and so are Spaniards from the mainland. Spain is a big producer, although you’d never think so when looking at labels in the Mercat d’Olivar.

Dried fruits and nuts seem to come from everywhere except Spain, including such faraway places as California, Argentina, Iran, Turkey and Israel. The best prunes available in Palma come from California and South America.

Californian prunes come in a variety of sizes: large for use in cocktail nibbles or certain French dishes, medium for garnishing, and small for making into purée.

Whole prunes are graded according to the number per kilo. You get about 38 of the jumbos per kilo and up to 200 of the smallest variety, the kind added to breakfast cereals.
Prunes cannot be made from every kind of plum: special varieties that dry without fermenting are called for.

In the old days, the fresh fruit was washed, then it was dehydrated until the moisture content was reduced to 18 per cent. But a way was discovered of moisturising the prune by blanching it and packing it into vacuum bags at high temperatures.

This increased the moisture content to 30 per cent which meant the prunes were softer and tastier and didn’t need pre-soaking. Cooking times were also reduced by a considerable amount.

These moist prunes, which can be bought at the Gelabert stall in the Mercat d’Olivar, come with and without the pits. For certain French dishes, in which the prunes are cooked in a sauce with meat, you should use prunes with stones, because they will keep their shape better. A pitted prune will completely disintegrate if cooked for too long.

If you buy the very dry prunes, which are always cheaper than the moist variety, they can be rehydrated (or plumped up, as the popular term has it) in various ways. They can be put into a suitable container with cinnamon, lemon or orange rind, covered with boiling water and left overnight.

They can also be covered with cold water, left overnight, and then gently simmered in a syrup made with the soaking water, plus cinnamon stick to taste and lemon or orange rind. Some cooks prefer to plump them up in strong cold tea, or freshly pressed orange juice.

Chopped pitted prunes can be added to stuffings for chickens and other birds, thus contributing a dash of colour and a touch of sweetness that can be quite seductive. When making rice pilaf for serving with Middle Eastern dishes, try chopped prunes instead of raisins.

Pitted prunes that have been plumped up in orange juice can be roughly chopped and simmered in the juice with lemon rind to taste, and served with rice pudding or vanilla ice cream. It’s the kind of dessert that adults and children adore. 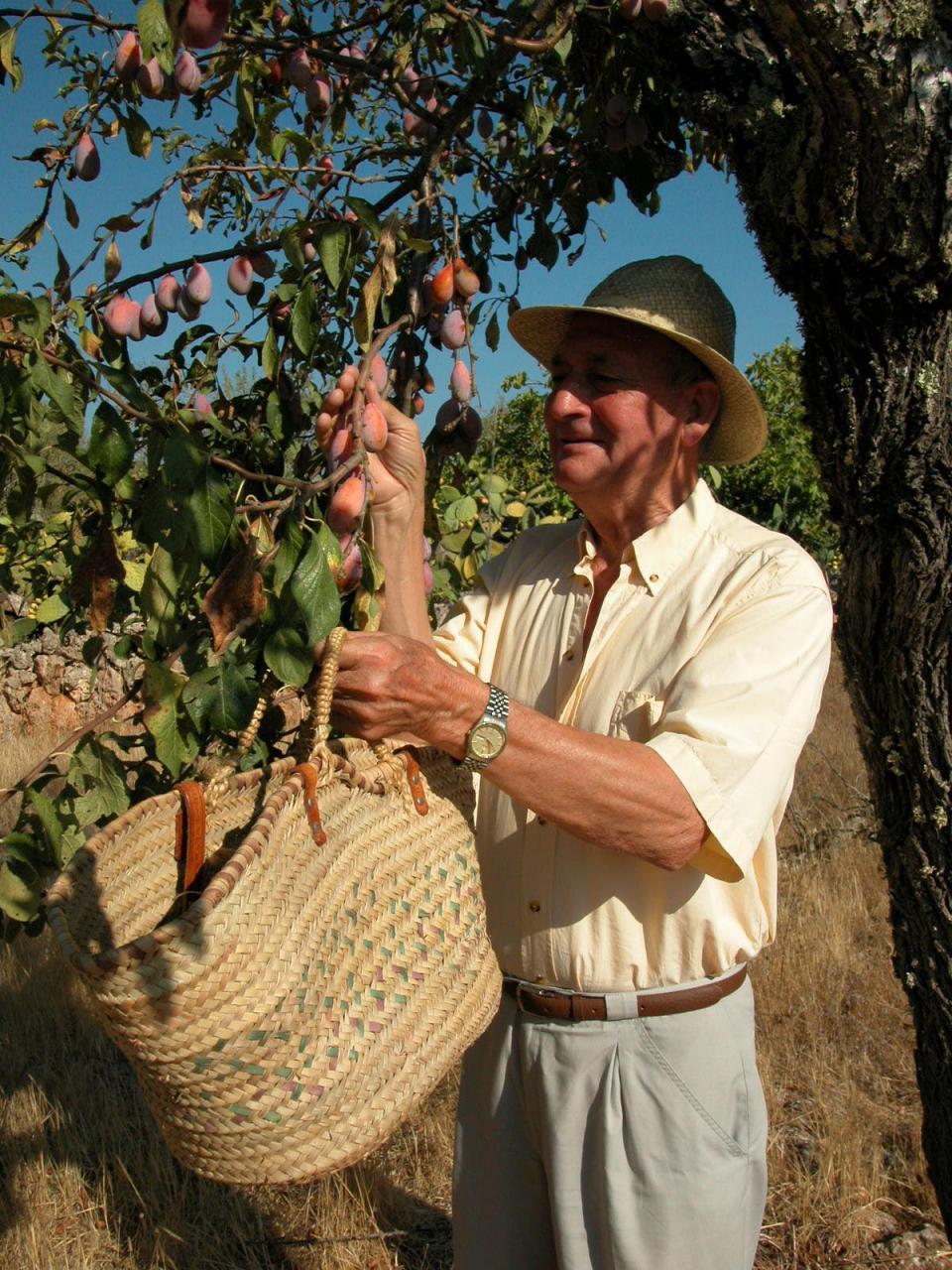 And it’s good for them.

Gammon, which is nowadays readily available at the big supermarkets and elsewhere, makes comforting luncheon or dinner dishes that are ideal for cold days or nights.

If the gammon has a rind remove it and snip the edges of the meat to prevent curling. Place it on an oiled grill pan and put it under a heated grill until nicely browned, and then turn.

Arrange prune and tomato halves round the gammon and season the tomatoes with salt and pepper and a pinch of sugar.

Spoon a little of the pan fat over the tomatoes and add the green pepper rings to the grill pan. Turn them after 90 seconds. Sprinkle the tomatoes and prunes with a little grated cheese and grill until the cheese melts and browns little. Serve immediately on hot plates.
Prunes are easily preserved in spirits and kept for impromptu tasty desserts.

Put some pitted prunes from the Gelabert stall into a suitable jar and pour over the spirit of your choice. It can be a good Spanish brandy, grappa, cherry brandy, port or madeira.

If the prunes are the very dry kind, they soak up some of the spirits, so check up once a week and top up as necessary. Let the prunes soak for at least a month before using them.

If large top quality prunes are done this way, they can be served with custard, vanilla ice cream, yoghurt or whipped cream. And the spirits, which absorb the flavours and sugars from the prunes, make a delicious after dinner tipple.