Ninety years ago: The Republic in Mallorca

A new era beckoned for the island and for the country

The Republic was going to be established. | MDB files

In late January 1930, the dictator Miguel Primo de Rivera resigned. It is sometimes said that he was overthrown. He was not. He had lost the support of King Alfonso XIII and of military leaders, this loss having been prompted by the end of an economic boom over which he had presided and street protests against him and the king.

He was, in one respect, unlucky. As the peseta lost value, it was yet to be recognised that circumstances were conspiring to cause the Great Depression. With Primo de Rivera gone and with the economy taking a turn for the worse, there was political chaos, a situation that had been all too regular in Spain. On April 12, 1931, municipal elections were held. Republican candidates won 41 provincial capitals. Two days later, Alfonso went into the exile and the Republic was proclaimed.

In the Balearics, the elections led to there being 89 anti-monarchist councillors - 62 republicans, 23 socialists and four independents. By contrast, there were 565 monarchist councillors from the ranks of liberals, conservatives and others. In Palma, where the elections were obviously most important, there were 23 liberals and four conservatives. The anti-monarchists mustered nine, while there were five from a group in favour of regional autonomy.

A first-hand account tells us how it was in Palma on that Tuesday (April 14). From mid-morning, the square in front of the town hall was full of people. They were expectant, animated in their conversations. The morning's radio had been full of rumour. The Republic was going to be established.

By midday, it was being said that at any moment the flag would be hung from the town hall. Nothing was certain, except for a saying that was doing the rounds: "If it's not today, it'll be tomorrow when the Republic comes." Mañana! Lunch clearly having been taken, by mid-afternoon everyone seemed certain. 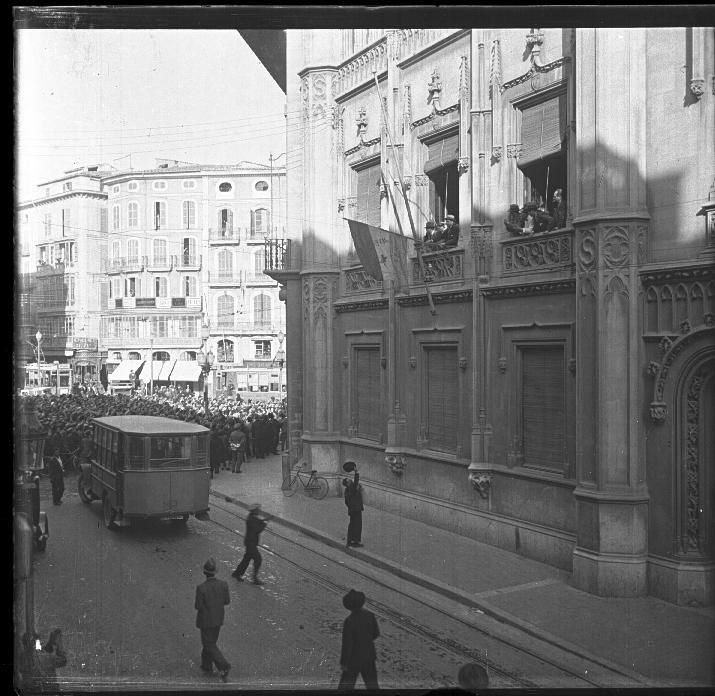 There was a bookshop which had been a focus for republican sentiment for some years. People were coming out of the shop with flags of red, yellow and purple. It was around twenty to four. A worker from the port, his name was Orpi, was one of those who hoisted the tricolor at the town hall.

Those in the square were a mix of enthusiastic supporters and curious onlookers. All of them were then able to listen to passionate speeches. Next to the Republican flag, the Aragonese-Catalan flag of castle and yellow and red stripes was hung. The bell, En Figuera, was rung.

The authorities, those about to be removed, didn't really know how to react or what to do. On the radio, it was reported that the civil administration in Barcelona had fallen and that Alfonso had abdicated (he hadn't). By nine in the evening, the outgoing governor was insisting that he wouldn't resign, Antoni Pou having earlier gone to his office and met passive resistance to his claim to be the new governor. It was to be the next morning when Pou was confirmed as the civil governor.

This account gives something of a flavour of events ninety years ago; something of a flavour as it was evident that Palma and Majorca were not hotbeds of republicanism (or seemingly not). However, away from Palma, Antoni Mateu proclaimed the republic in Inca on the same day (the fourteenth) and by the following Tuesday there were republican mayors elsewhere, such as in Felanitx and Manacor. An immediate development was that the name of the football club was changed - the Sociedad Deportiva Alfonso XIII became CD Mallorca.

Not everyone was happy though, and clearly not. On the Thursday (April 16) there were protests against the fact that there had been no republican majority at the municipal elections. Claims and speculation were rife, and these included the liberals (of Joan March) having bought votes. As things turned out, because the courts had become involved, there were to shortly be fresh elections.

At the election on May 31, the federal republicans, regionalists and PSOE socialists won 30 of the available 41 council seats in Palma. The process, despite the protests that had followed the first elections, was peaceful. Mallorca was part of the Second Republic.

A new era beckoned for the island and for the country. But if there had been chaos following the fall of Primo de Rivera, this was as nothing compared with what lay in wait.