Food and Wine: Scrambled eggs - trying to get them creamy

On paper it sounds easy-peasy

For the past several months butter has been an essential part of my start to the day because I have been practising scrambled eggs in an attempt to get a perfect creamy version every time — something that has eluded me for decades.

And I’m not the only one: many professional cooks have considerable difficulty in turning out creamy scrambled eggs…because it’s such a difficult dish to get right.

On paper it sounds easy-peasy: you beat up some eggs, you add them to a frying pan with a good knob of butter and you cook them over a low heat, stirring frequently. When the mixture thickens, but before it solidifies, you put the scrambled eggs on to a plate and serve them immediately.

It sounds so easy you’d think 10-year-old children would get them right at their first attempt. But if someone gave me odds, I’d bet €20 we could go into 10 restaurants in the centre of Palma chosen at random and not one of them would produce an acceptably creamy version.

But there would be one proviso: no restaurants with a Basque in the kitchen. Basques do wizardly dishes with beaten eggs and produce the finest moist omelettes in Spain as well as the creamiest of scrambled eggs.

This is partly because Basques use omelettes and scrambled eggs as vehicles for a wide range of products from land and sea, all of them much associated with Basque cuisine and culture.

These include all kinds of wild mushrooms during autumn and winter, crustaceans from the Cantabrian Sea (as well as several European countries) and certain veggies such as leeks, artichokes, asparagus and ajetes (young garlic shoots).

Without exception, every Basque cook I have met has been a dab hand at doing runny omelettes and creamy scrambled eggs.

The finest scrambled eggs I have ever had were done by the late Patxi Fernández who had a place called La Trianera de Patxi, in Calle Ramon i Cajal, now the home of Made in China.

No one did scrambled eggs that were as creamy as Patxi’s. He was the kind of cook who didn’t have any secrets and he would have told me exactly how he did them, had I asked.

But there was a rather unsurmountable obstacle there: Patxi mumbled through clenched teeth at the speed of a Kalashnikov sub-machine gun and it was almost impossible to understand what he was saying. But instead of listening to his instructions, I went along one day to watch him do scrambled eggs from scratch.

Most restaurant cooks use three eggs for this dish but Patxi always did it with four. The extra egg gave a smoother version and the cost of another egg was a small price to pay to ensure a better dish.

Patxi beat the eggs lightly before adding them to a frying pan with a little olive oil that was already hot. He had the frying pan on a low heat and continued to stir the eggs with a wooden fork.

After about four minutes he took the frying pan off the heat and stirred vigorously for another minute. Then he added langostinos that had been stir-fried separately. He stirred for another 30 seconds or so and immediately transferred the scrambled eggs to a lukewarm plate. They were perfectly creamy, as always.

In the above two paragraphs some obvious lessons can be seen and others are not so visible. From the first moment we can see one of the most important rules: the eggs must be cooked at a very low temperature. The cook who wants to speed up this all-important first step will make something that can be called scrambled eggs, but it won’t be a creamy version.

Eggs begin to coagulate and cook at well under 100C and it is essential they don’t reach this temperature too soon. If they do, the whites and the yolks solidify, the proteins shrink and a watery whey invades the frying pan, leaving behind a mess of unappetising coagulated eggs. The scrambled eggs have been ruined.

By cooking the eggs very slowly, and stirring them constantly, we can see when the cooking temperature is approaching and we can keep it under control. This could entail lifting the pan off the heat, while stirring, so the temperature of the eggs goes down and keeps them runny.

No matter how low the heat is, there will come a moment when the cooking temperature has been reached and the eggs start to coagulate more quickly.
That was when Patxi lifted the frying pan off the heat and stirred furiously before adding the langostinos and mixing them into the eggs.

And take note of the neat little detail of the lukewarm plate. Scrambled eggs cool down very quickly and many British cooks and housewives compensate for this by serving them lava-hot plates. That is a mistake because the runny scrambled eggs then continue to cook on the bottom — and that’s the last thing you want. 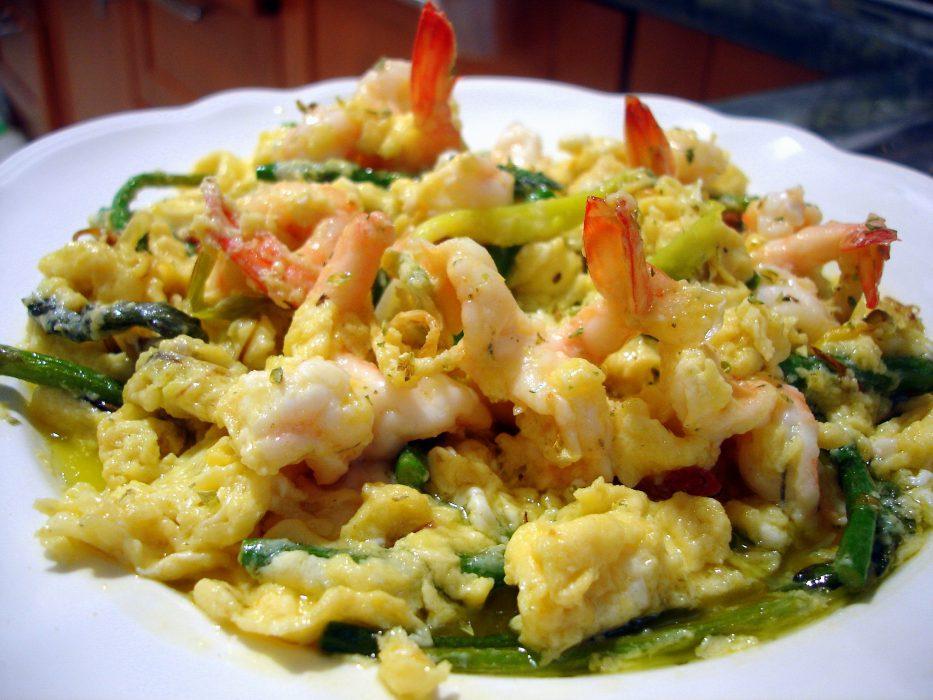 The most tricky part of the process is watching the bottom of the frying pan and calculating when to stop cooking the scrambled eggs. That takes practice — and that’s what I’ve been doing for the past several months.

While following Patxi’s method as closely as possible, I’ve also added a few personal touches. I always use three eggs and when beating them I add two tablespoons of cold water. That gives a texture that’s closest to the consistency of Patxi’s scrambled eggs, although he didn’t add any water.

Although the Basque cooks I know always use olive oil for their scrambled eggs, I have always done them in plenty of butter, in the traditional English and French way.
I add a heaped tablespoon of butter to the frying pan and another heaped tablespoon, cut up into snippets, to the beaten eggs before they go into the frying pan. The butter melts slowly as the eggs heat up and this produces a silky texture.

Sometimes, to ring up a little change, I stir in the snippets of butter when I stop cooking the eggs, and I serve them as soon as the butter is fully melted and incorporated into the eggs. This gives the dish an intense buttery flavour, which is rather special.

Most serious professional cooks use unsalted butter because it has certain advantages in the kitchen. Salted butter isn’t so suitable for cooking because it gives off more sediment that burns even at lowish temperatures.

If you want to cook at high temperatures with unsalted butter you can combine it with an almost equal mount of oil. This raises the burning point high enough to cope with most kinds of shallow frying.

Although I am now rather pleased with the scrambled eggs I am turning out every morning, they are still not as memorable as Patxi’s.

But I now consider myself to be at least in the same league as Patxi. I’m right at bottom of that league, mind you, but content and satisfied to have got this far.