In the early 19th century a large group of Italian cooks emigrated to the Barcelona area and got jobs in taverns and private homes. To cut a long story short, they eventually showed the Cataláns how to cook cannelloni.

Catalán housewives were very fond of cannelloni, which they called canelones, partly because they could use the meat and vegetables of leftover stews for the filling. Within a rather short time, cooks in Catalán homes and restaurants were making better canelones than the Italians — and with a much superior variety of fillings.

The same thing happened with croquettes, a French invention of minced meat and vegetables made in various shapes, breadcrumbed and deep-fried. But I have never come across croquettes in French homes or restaurants — and I see very few recipes in French food magazines and books. 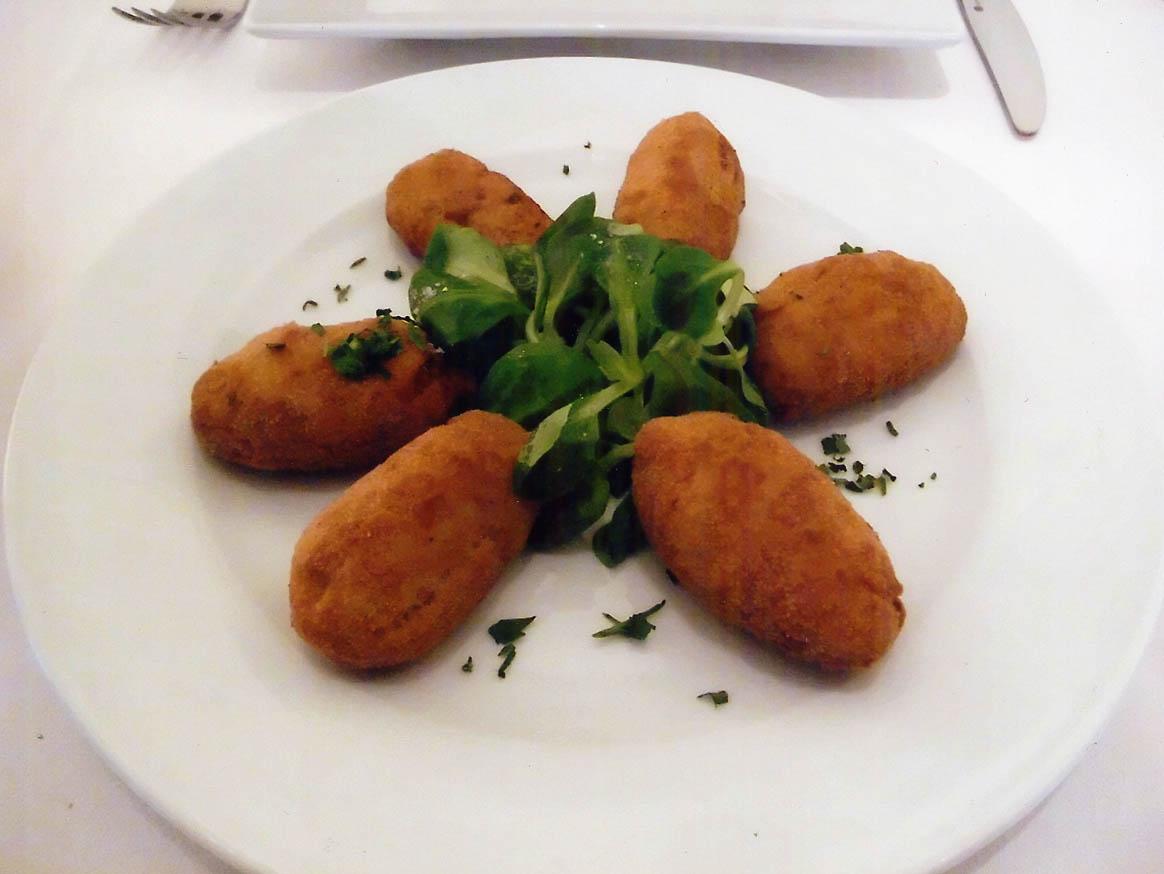 In Spain, however, croquettes are everywhere — on restaurant menus, in tapas bars, and they are a big favourite in homes all over the country.

Some foreigners (myself very much included) become completely hooked on croquettes and order them every time they see them on a restaurant menu…having been assured they are made on the premises and not bought in, as they so frequently are nowadays.

British Ambassador Hugh Elliott is an incorrigible croquette fan. In an interview in the Madrid daily El País, he was asked to name a confessable guilty pleasure. His immediate reply was: “Croquettes.”

And then (excellent diplomat that he is) he had high praise for those his mother-in-law makes, but added he was still looking for the perfect croquette.

I’ve had better luck than the Ambassador — I come across perfect croquettes on an average of once every 18 months. Perhaps it’s because I eat them more frequently than he does. On the other hand it could be that he’s a much tougher critic than I am.

When I recently had an individual paella at the Santa Catalina restaurant in Calle Fábrica, I was at a window table in the interior dining room overlooking the terrace, with a table of six right in front of me.

It was a French family and as a starter they had ordered a selection of tapas that included plump chicken croquettes. The youngest member of the family, a girl of about seven, who probably doesn’t get croquettes at home or in French restaurants, had a most serene look on her face as she silently chomped her way through some croquettes. Her mother wisely ordered another plate of them.

Spanish children first come across croquettes at a very early age —and invariably they are made by one of their grandmothers. When grandchildren are visiting, their abuela has at hand some kind of dish that can be made in a couple of minutes if the children are hungry.

That dish is frequently croquettes — or croquetas as they’re called in Spanish. This dish made by their grandmothers is a particularly poignant one for many Spaniards.

Children adore croquettes for all kinds of reasons, one being that they are a supreme finger food— and children adore eating with their fingers. So do many adults.
The young French girl eating chicken croquettes at the Santa Catalina restaurant started off with a knife and fork. But by the second one she was using her fingers — just as I was doing with my salt cod croquettes. 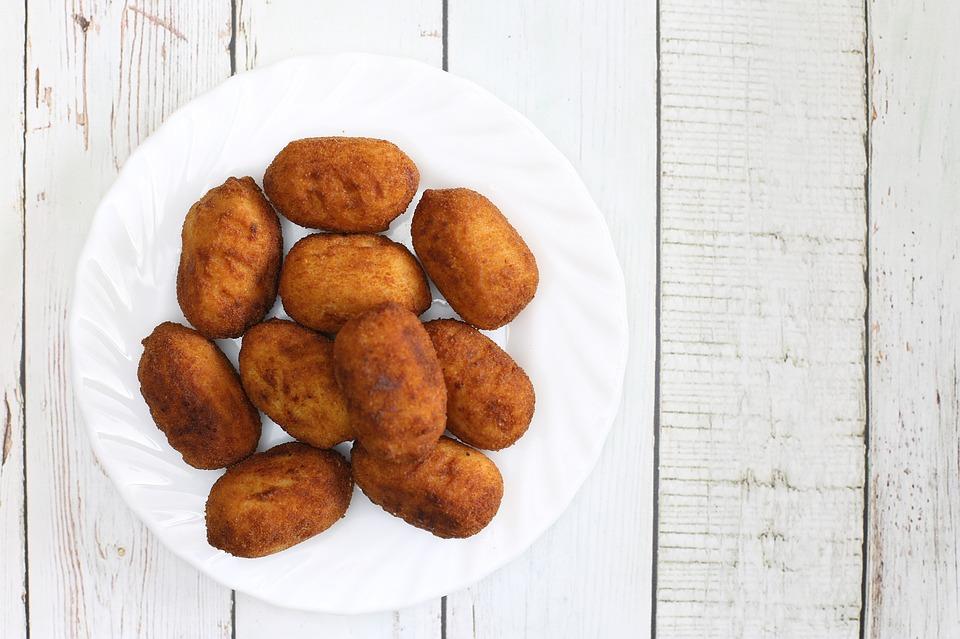 Conscientious Spanish mothers, who in the old days frequently had a bit of a struggle to make ends meet (it still happens today), always had croquettes on their repertoire of dishes because they are a good way of using up leftovers.

So it’s not at all surprising that by the time Spaniards reach adulthood, most of them are extremely fond of croquettes. And, as it happens, their preferred dish is always at hand. Tapas bars always have croquettes and many restaurants have three or four variations on the menu.

And when Spaniards go to any kind of celebration meal, be it a christening, first communion or a wedding, you can be pretty sure croquettes will be one of the appetisers.
Anyone with basic cooking skills can turn out edible croquettes. There are two main ways of doing them: with mashed potatoes or a paste made with thick bechamel sauce. Plus the chopped or minced vegetables, fish or meat you are using. 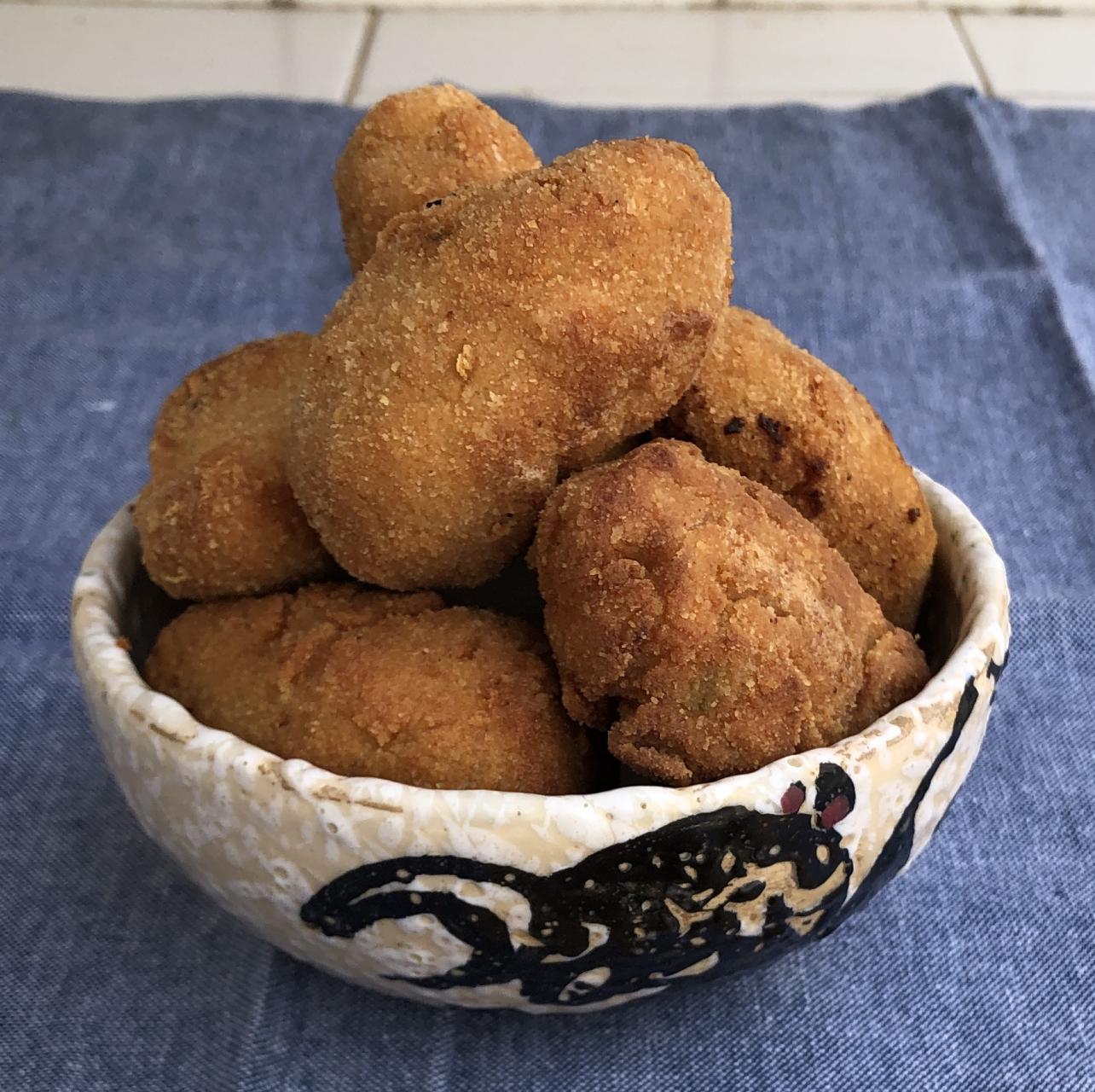 The method is always the same. Make a bechamel sauce with your usual recipe and when it has simmered slowly for about 20 minutes and has reduced and become really thick, add any herb that takes your fancy and stir in the minced cooked chicken, ham, fish or other main ingredient you are using.

Add salt and pepper to taste and simmer for another five minutes. Pour the mixture, which should be very thick but not stodgy, into a large serving dish. When cold, cover and put into the fridge.

To make the croquettes, take tablespoons of the paste and shape them into cylindrical shapes or balls. It is easier and quicker to make balls but most cooks prefer cylindrical shapes, which are easier for eating with the fingers or a fork. Don’t make the croquettes too large or too small and don’t worry one little bit if the cylindrical ones are misshapen.
Carefully drench them with flour, dip them into beaten egg and then roll them in breadcrumbs. Put them on to a platter in a single layer and keep them in the fridge until you are ready to fry them.

The frying oil must be hot, but not smoking. If it is too hot the breadcrumb coating will be of a deep brown colour before the heat has had time to penetrate to the centre. If the oil is hotter than it should be the croquettes may burst…which means, among other things, that they’ll be far from the perfect croquettes Ambassador Elliott has still to find.

Be sure to fry the croquettes a few at a time. If you put too many croquettes into the frying pan, the temperature of the oil will drop quickly and it won’t be hot enough. Put the fried croquettes on to kitchen paper to soak up any excess oil and serve them while they are still very hot.

Croquettes made with mashed potatoes are done in exactly the same way. Boil a kilo of potatoes in salted water and when soft put them through a vegetable mill into a large mixing bowl. You can also mash them with a large fork.

Stir in a couple of egg yolks, finely chopped parsley, grated nutmeg to taste, salt and pepper, plus the minced cooked chicken or the main ingredient you are using. Mix to a smooth paste and when cold form into croquettes and proceed as above.

Some of the best croquettes I have tasted were made with chopped cooked chicken which gave the croquettes lots of texture and character. Other cooks use chopped fish, cured or cooked ham, chopped cooked pork, and vegetables such as mushrooms or spinach.

No juices from the mushrooms should be added, and in the case of cooked spinach it must be squeezed very dry. If not the paste will be too soft and difficult to work with.

If you follow the above instructions, and have basic culinary skills, your croquettes will be a success. But it takes a great deal of practice to become an expert. The fact is that really good croquette makers are hard to find. Which is one reason why Ambassador Elliott is still looking for the perfect croquette.