Food for thought: Peaches - one of the most sensual fruits

They are best on their own but can also be eaten with thick cream or ice cream. | Nico Martimez/Martinez Studio

For many people, the highlight of the summer season is the chance to eat peaches, which can be on sale as early as May and as late as the start of November.

This rather long season gives us plenty of time to enjoy them fresh — and also to preserve a few kilos for winter eating.

The peach is one of the most sensual fruits, with seductive curves and subtle skin tones that remind us of the finer parts of the female anatomy.

Auguste Renoir, the French Impressionist, knew more about female curves and skin tones than possibly any other artist, as can be seen in one of his most famous works, Les Grandes Baigneuses. 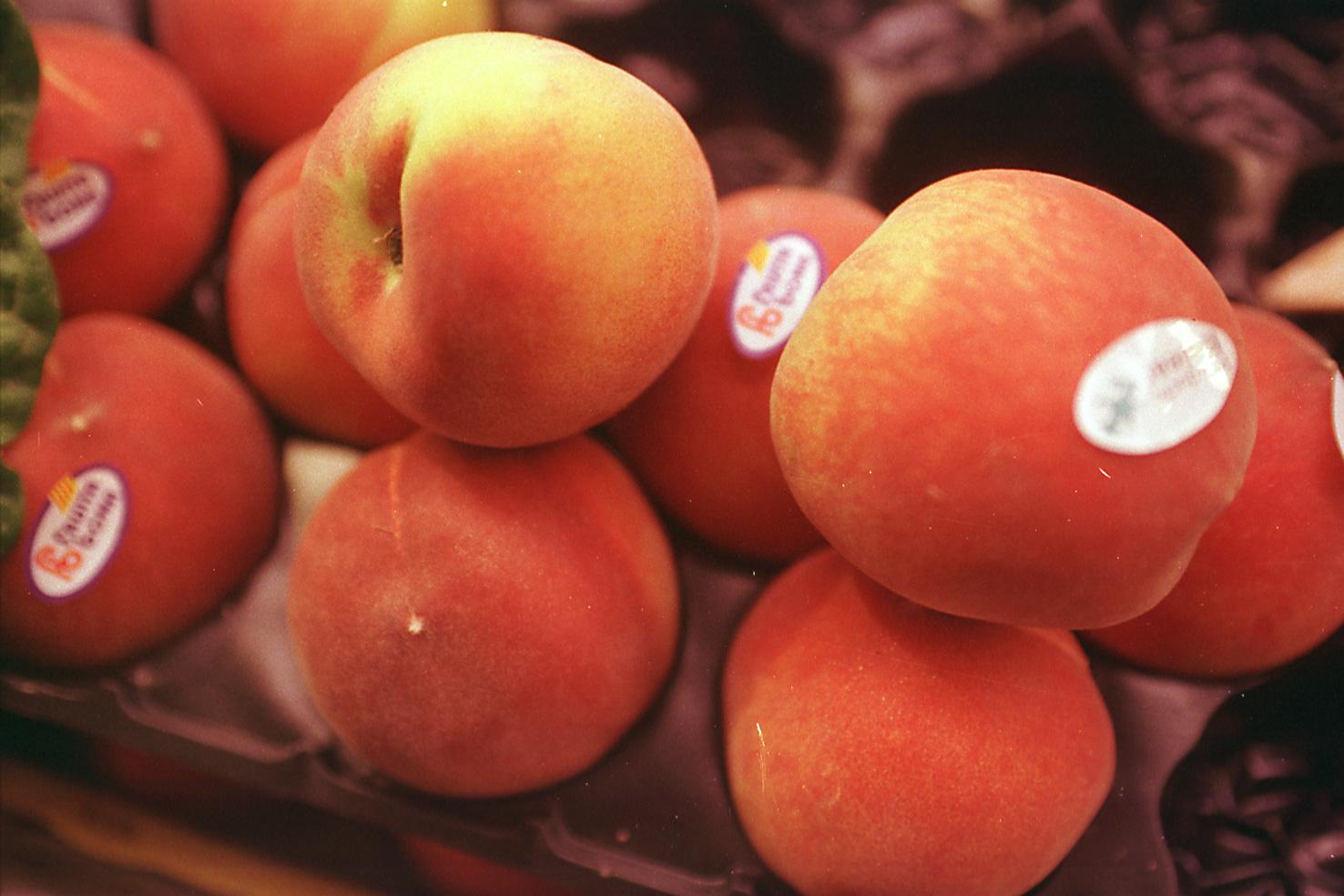 When young artists asked him for guidance when painting nudes, he told them the best training for painting a female breast was to learn to paint peaches and apples in a bowl.
Few would disagree that the peach is beautiful in shape and colour and the very word in English has come to mean something or someone of extreme beauty.

“She’s a peach of a girl,” is a phrase we would use only of someone whose physical beauty is approaching perfection. When a woman’s complexion is of a cream colour with downy pink cheeks, we talk of it as being like peaches and cream.

But not everything is perfect in the little world of peaches. It is thought that about five per cent of the population is allergic to them: they can cause skin irritations, stomach pains, vomitting, diarrhoea and other symptoms.

At first it was thought the allergy was caused by some kind of pollen on the skin of the fruit, or chemicals in insecticides. But research has shown the culprit is a protein in the peach’s skin.

They are also one of the better fruits for those who are watching their weight — they contain only 40 calories per 100 grs. Low in mineral salts, they are ideal for people with high blood pressure.

Peaches are native to China although their botanical name, Prunus persica, suggests they came from Persia. What happened was that the peach went from China to India and then to Persia, from where it was introduced into Greece after the battle of Marathon in 490BC.

From Greece it went to Rome and because the Romans knew the Greeks received it from the Persians, they called it Prunus persica. Our word peach, the French pêche, the Italian pesca and the Portuguese pêssago, are all derived from the Greek word for Persia.

Pliny wrote about peaches, mentioning their astronomic price and adding that they spoiled much more quickly than any other fruit. But despite the price they were held in high esteem by those Romans who could afford them.

In Chinese myths and poetry, the peach is as important as the apple in our culture. One of the Chinese myths was the peach of immortality. They appeared once every 6,000 years so that the gods could eat them and thereby live for ever. 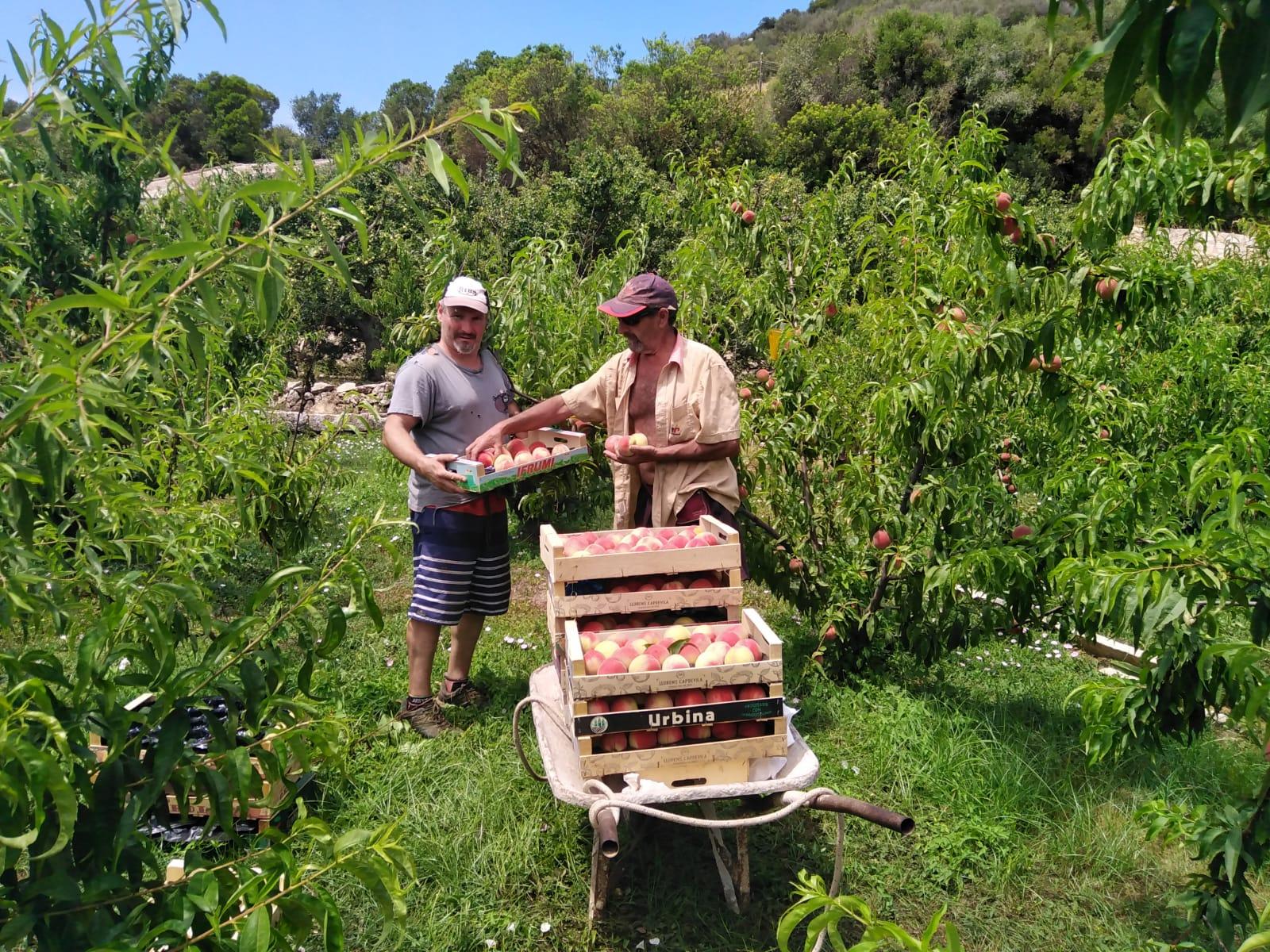 The peach is the most widely cultivated fruit after the apple and there are more than 2,000 varieties all over the world. In local markets and supermarkets you will see large pale peaches marked ‘melocotón auténtico’, or authentic peach.

It is no more authentic than the other 2,000 plus varieties but some Spaniards think it is the best and, therefore, the only one worth buying.

Spain is a big producer of peaches and is in third place behind Italy and France. The Spanish varieties are mainly cultivated in Murcia, Lérida, Tarragona and Huesca.

Two Spanish peaches have Denominación de Origen (DO) status and both are in Catalonia. One is called Prèssec de Penedès and the other is Prèssec de Pinyana, prèssec being the Catalán word for peach.

Under DO rules, these peaches are displayed in a single layer in wooden boxes on which the name of the peach is clearly printed. The peaches must remain in the box until the last one is sold.

When buying peaches reject any that are soft and even slightly blemished. Sometimes the bruise is difficult to see, so be sure to look closely, especially when buying at a supermarket when we can pick out the best ones. Soft peaches have a woolly texture and nothing can be done to save them. 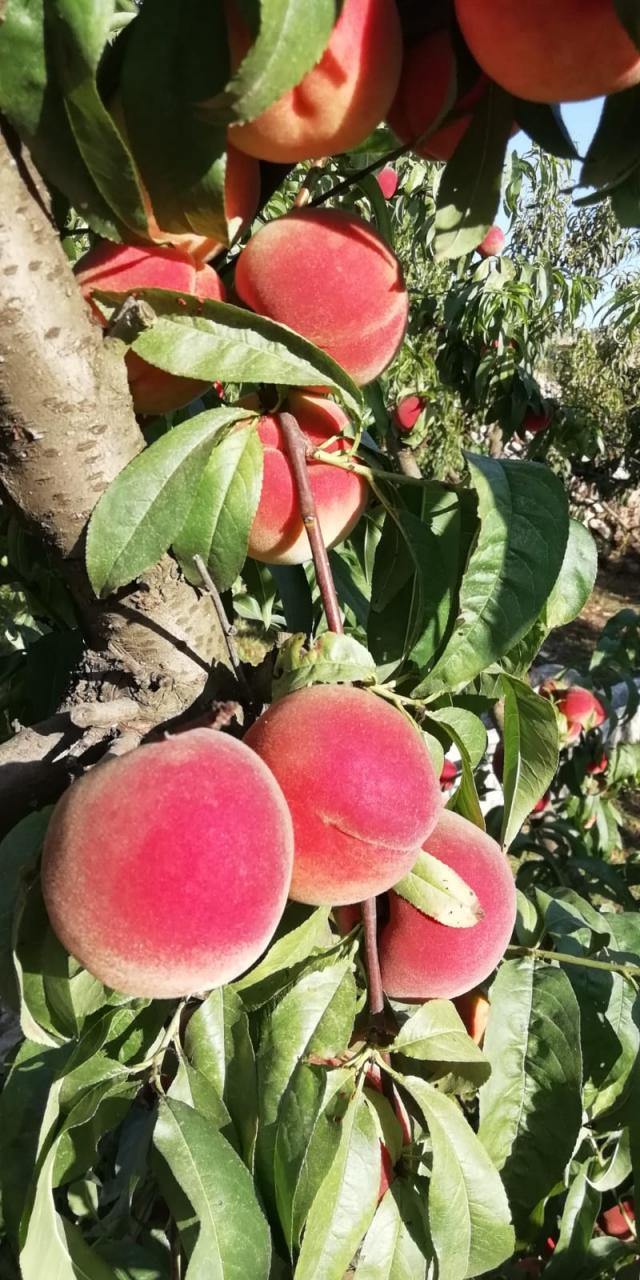 Nectarines are also on sale now. They are one of the 2,000 plus varieties with a downless skin, although even stallholders at the Mercat d’Olivar will tell you they are a cross between a peach and a plum.

Buying nectarines can be a bit of a gamble because colour alone isn’t a foolproof guide: even those with a deep red hue can be hard and tasteless. A couple I bought were perfect on the outside but inedibly blemished on the inside.

But as a rule quality in Mallorca is good and the delight of finding a peach or nectarine that is highly perfumed, juicy and sweet takes a lot of beating.

Fine ripe peaches are at their best when eaten for dessert or as a between meals nibble. But you can have them in other ways. A Mallorcan friend once showed me an easy-peasy way of eating them.

We had been drinking a superb Ribera del Duero red during lunch and were having fresh fruit for dessert. He took a peach and cut it up into smallish uneven chunks, dropping them into his large Riedel glass that was about one third full.

He left them there for a while and then started to fish out the pieces of peach with a spoon. He also took sips of the wine.

This makes a memorable tabletop DIY dessert that involves no work. But it is essential to have a high quality peach or nectarine and a really good red.

A couple of years later I discovered that they take this idea a step further in Murcia by pouring a bottle of red wine into a wide bowl and adding pieces of cinnamon stick and twists of lemon peel.

Peaches are peeled (by dipping them into boiling water for 20-40 seconds), sliced into the bowl and left in the fridge for a couple of hours. They are best on their own but can also be eaten with thick cream or ice cream.

There is a similar dish in Navarra, but cooks there prefer to heat the wine before adding the peaches. For 10 large peaches they use a bottle of red wine. eight heaped tablespoons of sugar, two tablespoons of brandy and a few pieces of cinnamon stick.

Everything, except the peaches, is put into a saucepan, brought to the boil and simmered for 10 minutes. The saucepan is taken off the heat and the peeled and sliced peaches are added immediately. When the wine and peaches come to room temperature they are refrigerated for a few hours.

A Basque variation on this theme calls for eight peeled peaches cut in half and pitted, a bottle of red wine, 400 grs of sugar and the rind of an orange.

A more elaborate dish, but still an easy one, is an Italian dessert with a French name that is ideal for an elegant summer luncheon or dinner: pêches à la Fenice. Large peeled peaches are halved, stoned and cooked in a syrup of sugar and water. The cavities are filled with raspberries, sprinkled with sugar and adorned with slivers of almonds. Just before serving, heated brandy is poured over each peach and ignited.

This dessert is named after the famous Fenice theatre in Venice, opposite which are cafes that serve it. Like many fruits, peaches can be used to great effect in meat dishes. Sliced peaches can be added to a chicken casserole and they also make an interesting sauce for roast chicken and other poultry.

You make the sauce by sautéing a large finely chopped onion in a shallow frying pan with a little virgen extra olive oil. When the onion is changing colour, deglaze with two tablespoons of wine vinegar.

As soon as the vinegar evaporates add 150 mls of rich chicken stock, 125 mls of dry white wine or sherry and two tablespoons of port or madeira. Bring this mixture to the boil and add sliced peeled peaches.

Simmer until tender and reserve a few slices that have kept their shape for use as a final garnish. Taste the sauce to check it is strong enough (it should be thickish and quite concentrated) and let it reduce a little more if necessary. When it is to your liking, blitz it in a blender.

Return the sauce to the washed-out pan, add salt to taste and pinches of pepper and sugar. Stir in six tablespoons of thick cream or a couple of tablespoons of unsalted butter. Correct seasoning, if necessary.

Finally, carve the roast chicken, arrange the sliced meat on a serving dish and spoon over the sauce. Decorate the dish with the reserved peach slices.

In the play The Madras House, actor-dramatist Harley Granville-Barker has one of his characters say: “Rightly thought of, there is poetry in peaches…even when they are canned.” I couldn’t agree less with the second part of that statement. Canned peaches have always seemed artificial and certainly far from having the character of the fresh fruit.
But peaches we bottle at home in a thick syrup are another matter and they can be most useful in winter for making desserts that remind us of the warm days of summer.

There’s nothing difficult about bottling fruit in syrup and the only special equipment needed is a set of preserving jars and a kitchen thermometer. You’ll find these jars with a snap-down rubber band around the lid at El Corte Inglés in the Avenidas as well as in the Chinese bazaars all over town.

For one kilo of peaches you will need 750 grs of sugar and 200 mls of water. These are the proportions favoured by most Spanish cooks. Some people prefer to use a litre of water and 400 grs of sugar. I don’t have a sweet tooth, so I prefer the latter.

Dissolve the sugar in the water, bring to a gentle boil and leave for one minute. Take off the heat and let it get cold. Peel the peaches by dipping them into boiling water for 20-40 seconds. Halve them and take out the stones. Break a few of them, take out the kernels and blanch in the boiling water to ease the skins off.

Put the peaches in the preserving jars, either in halves or sliced thickly. Add two or three kernels. Cover with the cold syrup and close the lids.

Put the jars into a bain marie over a very low heat so that it takes the water an hour to reach 54ºC and 90 minutes to reach 82ºC. Keep the water at 82ºC for 15 minutes. Then take the jars out of the water and let them get cold. Store in a dry dark cupboard.

On an autumn or winter day they will make an easy dessert served with thick cream or ice cream and you’ll feel really pleased that you bottled them in the summer.