Food for thought: Persimmons - the fruits of autumn have already arrived at markets

The easiest way to eat a persimmon is as a dessert fruit.

If you weren’t aware that today is September 22 and the first day of autumn, on a walk round local markets at the weekend you would have seen some of the fruits that announce the imminent arrival of the season that leaves the countryside ablaze with colour and brings us longer and darker nights.

Very much in view at the Mercat d’Olivar were the season’s first persimmons which resemble large tomatoes but have very sweet flesh.

Although the persimmon’s Latin name Diospyros means ‘food of the gods’, most Anglo-Americans I know never eat it. Indeed, they have never even tasted one.

For many people it is one of those fruits, like the quince, which they know of but never buy. It all comes down to lack of familiarity and not quite knowing what to do with it.

The persimmon and the tomato are so alike that if you were doing your shopping in a rush, you could easily pick up a basket of persimmons instead of your favourite salad fruit.

But you would soon know the difference when you tasted them: this tomato look-alike is so sweet that some people find it more than a little strange and off-putting.

Mallorcans adore persimmons and snap them up as soon as they appear in September and carry on enjoying them until Christmas when their short season comes to an end.

Although the persimmon looks very much like a tomato at first glance and from a distance, you can see the difference when you look closely: the persimmon has a translucent skin plus a flat green stalk that is quite different to that of the tomato.

The persimmons on sale here come from Andalusia, mainly Granada. Although it is a sub-tropical fruit, it can put up with low temperatures (and even frost) and can be cultivated in the Mediterranean and southern Spain.

The fruit was being cultivated in Japan 1,300 years ago and the English started to grow it in 1629. In America they have wild persimmons (Diospyros virginiana) which are also called sugar-plum.

It grows from Connecticut to the Gulf of Mexico and went to the Great Plains, but it is mostly found in the Middle West and the Carolinas.

It was this persimmon the English first heard about because it quickly became known to early settlers and was described by travellers.

In his book, Historie of Travell into Virginia Britania, published in 1612, William Strachey likens them to the English medlar.

The first European to write about persimmons was the Spanish explorer Fernando de Soto who learned about them from the Indians of Florida in 1539.

The name persimmon comes from ‘putchamin’, a phonetic spelling of the name used by the Indians of the Algonquin tribe who lived in Canada along the Ottawa River and its tributaries and westward to the north of Lake Superior.

They ate the wild persimmons when they were ripe and had fallen from the tree. They also dried them for eating during the winter months.

The early settlers also ate wild persimmons and used them in the making of puddings, bread and preserves.

Persimmons grow on attractive trees that can reach a height of 25 feet. They have pretty cream and pink flowers and shiny green leaves that can be up to seven inches long.

Thousands of varieties with a wide range of colours and shapes now exist. They can be spherical, acorn-like or even similar to a flattened cube.
Most of them are of a reddish-orange colour.

A Japanese variety called saijo, considered by some experts to be the best of all, is of a dull yellow.

Another Japanese variety, the izu with a soft syrupy flesh, is of a burnished orange colour.
The Mexicans have an unusual black persimmon popularly known as the ‘chocolate pudding fruit’. It is very much favoured by young children. 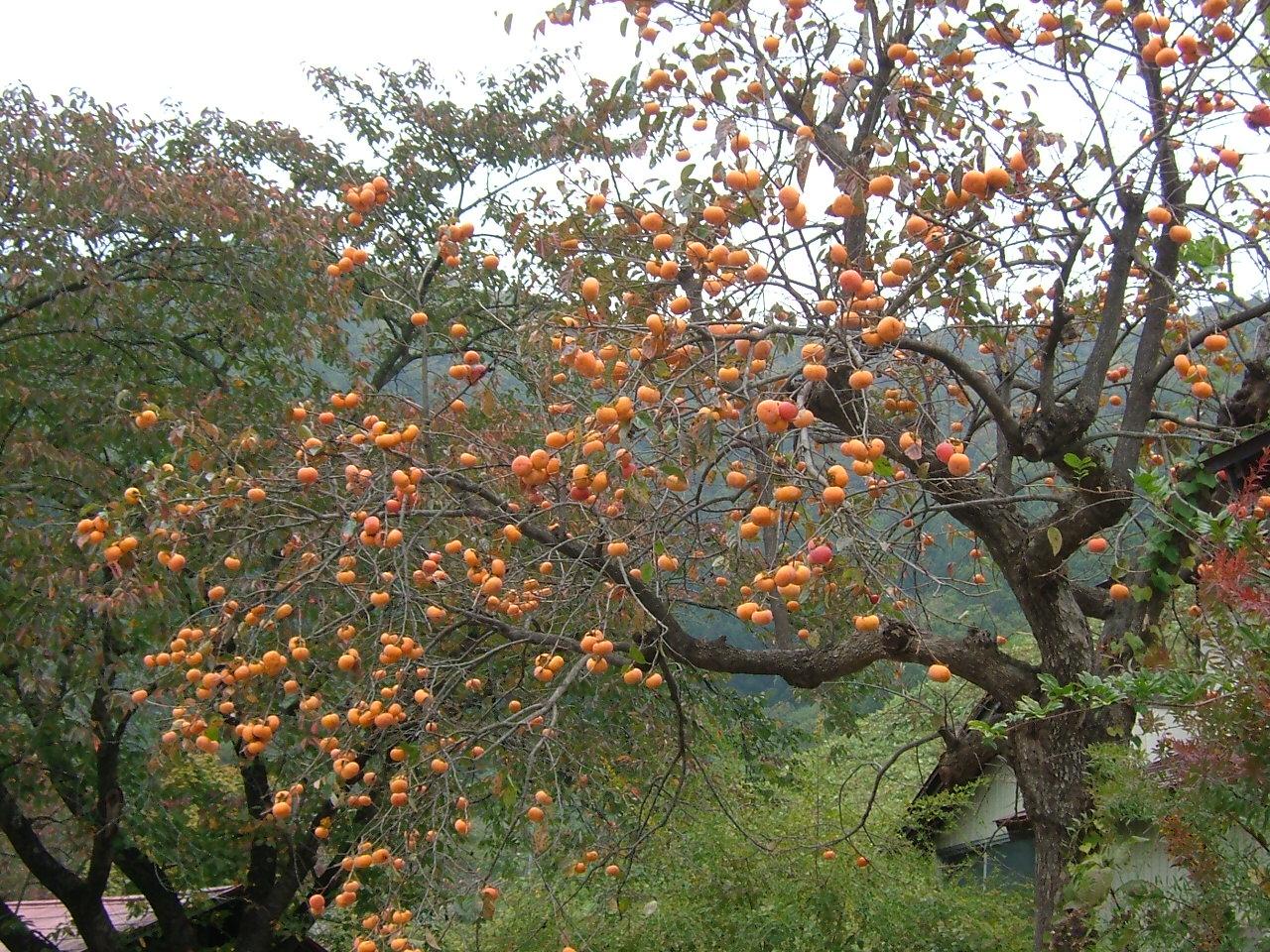 A handsome variety grown in Israel and known as the Sharon fruit, has a wax-like skin of a pale orange colour. You can buy it here although it is dearer than the varieties from Andalusia.

The persimmon is one of those fruits with a wide variety of names. In Latin it is Diospyros kaki and in England it is sometimes called kaki fruit or date plum.

The Americans often call it Oriental plum because the fruit originally came from Japan. The Japanese know it as kaki, a word that was also adopted by the Spanish and the French.

Then there is the Sharon fruit, so called because it is grown in Israel’s Sharon Valley. English people dropped that name and went back to calling it persimmon, a name that originated in America.

The persimmon is inedible when it is green and unripe. If you bit into a green one it would be so astringent it would fur your mouth, like alum.

Some of the early settlers and explorers didn’t know that green unripe persimmons were so astringent that they were inedible.

Their comments on the fruit were most negative, one writing that their severe acidity could “drawe a man’s mouth awrie with much torment”.

Another settler, Francis Peyre Porcher, wrote in 1869 that persimmons made a good drink when fermented — ‘simmon’ beer and wine soon became an important and very popular by-product.

Unlike most fruits, the persimmon is harvested when green because it ripens better when in storage than when left on the tree.

When the persimmon ripens, it changes from green to a translucent red and the pulp becomes soft and as sweet as a plum. It’s this translucent tinge that makes us realise it’s not a tomato.

The Sharon fruit differs from other varieties in that it cane be eaten when firm and unripe: they are perfectly edible in their pale orange state.

Persimmon are extremely fragile, which is why they are usually sold in containers of about five to nine, depending on size. Green persimmons look more robust but they also need delicate handling.

The easiest way to eat a persimmon is as a dessert fruit. You simply slice off the top and eat the flesh with a small spoon. You can use a small fork to stir some liquid cream into the flesh, making it even more of a dessert. You can also serve some whipped cream on the side.

A medium-sized persimmon for each diner is just right as a dessert fruit, but if they are extremely large then slice them in half before serving.

Persimmon pulp makes an attractive sorbet and can also be used for flavouring a mousse or a custard. Very ripe persimmons can be stewed like any other fruit and made into an interesting compote.

An unusual jam can be made with the ripest persimmons using your usual recipe. For jam that has a bit of texture, add the roughly chopped pulp of less ripe fruit.

Leftover rice pudding can be used to stuff persimmons for a dessert with an exotic touch. Scoop out the flesh, mash it with a fork and macerate it for an hour with your favourite liqueur. Stir this mixture into the rice pudding and fill the empty fruit. 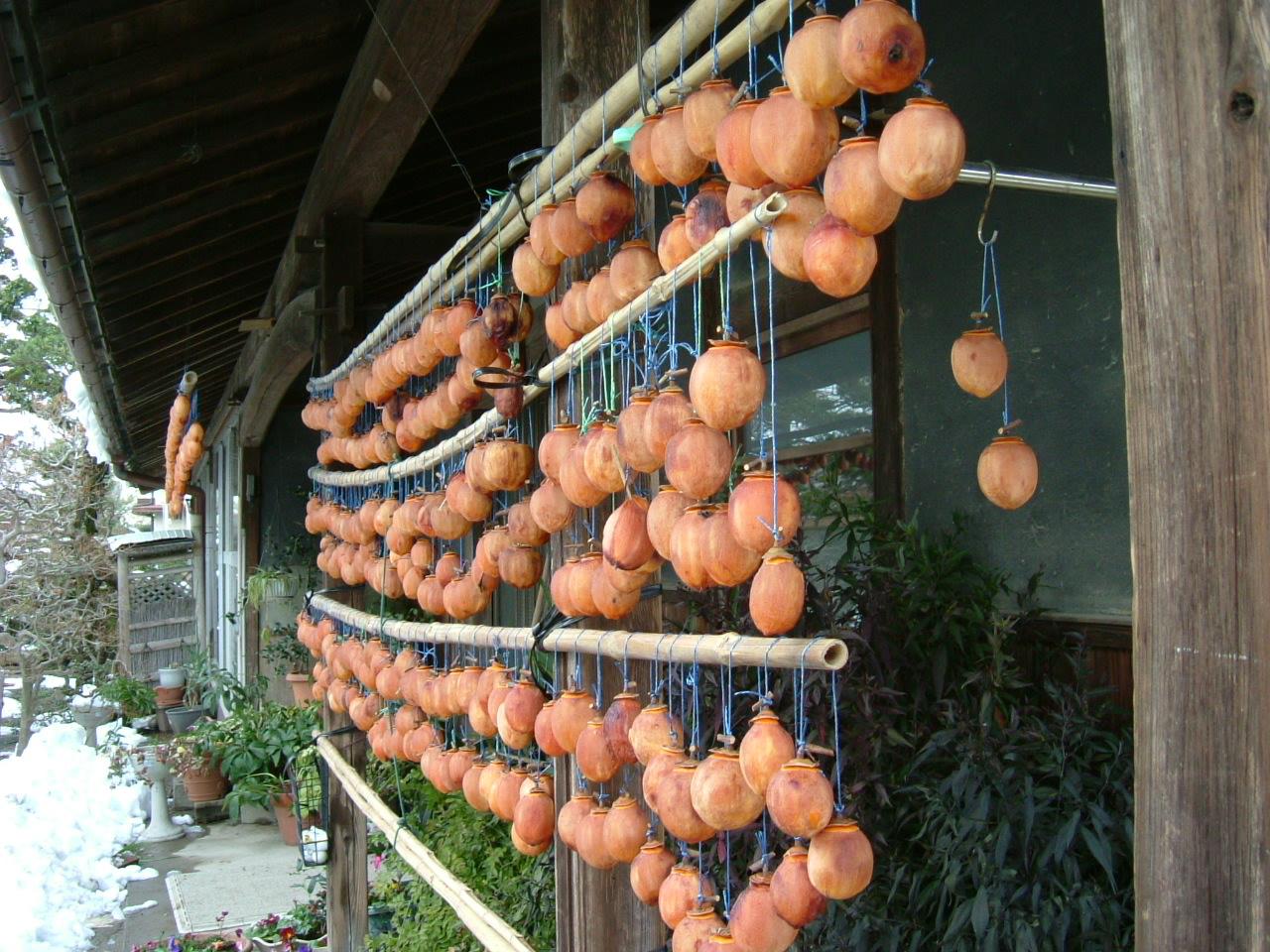 In a saucepan combine the wine, orange juice, water, ginger and cinnamon stick. Heat gently, stirring until the sugar dissolves.

Add the Sharon fruit halves. Bring mixture to the boil, cover the pan, lower the heat and simmer for about 15 minutes or until the fruit is soft. Remove the fruit with a slotted spoon and set aside.

Continue to boil the liquid until it is reduced by about half. Place the Sharon fruit on individual plates and drizzle with the syrup. Serve hot with vanilla ice cream. They are also delicious when served atop bread pudding. The skin is edible.

A pork dish with a difference can be made with tenderloin (lomo de cerdo). You will need: 600 grs lomo in one piece, the pulp of 4-6 ripe persimmons, 6 finely chopped medium-sized onions, one coffee cup virgen extra olive oil, good pinch of allspice (pimienta de Jamaica), plus salt and pepper to taste.

Put the finely chopped onion into a small saucepan with enough stock to cover by about two centimetres. Bring to the boil, simmer for 40 minutes, then drain in a sieve over a smallish bowl.

Heat the oil in a heavy saucepan large enough to take the piece of lomo. Seal it on all sides over a high heat. Turn down the heat to minimum, cover the pan with its lid and simmer until the lomo is cooked through, about 20 minutes. Turn the lomo at the halfway stage.

Transfer the cooked lomo to an oval serving dish and keep warm. Add the drained cooked onions to the saucepan and sauté over a highish heat for three minutes.

Add the persimmon pulp with the allspice and salt and pepper to taste. Stir in four tablespoons of the reserved onion liquid and simmer the mixture for 10 minutes with the lid on.

Blitz the mixture in a blender and return it to the small saucepan. Bring back to simmering point and correct seasoning if necessary. If it is too thin reduce over a high heat, stirring frequently.

Pour sauce over the pork and carve at table. Serve with boiled potatoes and vegetables of your choice. It is also delicious with creamy mashed potatoes or with buttered long grain white rice.

About 15 years ago scientists were telling us that persimmons could help us to avoid hearts attacks. A research team at the Hebrew University in Jerusalem carried out the first ever study of the persimmon’s health-giving properties and compared it to other fruits.
The research showed that the persimmon contains high concentrations of dietary fibre, minerals and phenolic compounds.

These are essential in combating atherosclerosis, which blocks the arteries and leads to heart disease, heart attacks and strokes.

Another study by the same team at the Hebrew University showed that laboratory rats fed with persimmons had better lipid metabolism: the way the body copes with fat.

The leader of the research team said the persimmon’s high fibre content, phenolic, minerals and trace elements make it an ideal component in an anti-atherosclerosis diet.
Persimmons contain twice as much dietary fibre as apples and more of the major phenolics — antioxidants that ward off cancer and help to prevent blood clots.

The fruit also has high levels of sodium, potassium, magnesium, calcium, iron and manganese. But apples have a higher content of copper and zinc. The eating of one persimmon a day can help fight atherosclerosis, the research team concluded.