The fruit comes from the Annona cherimola tree, native to the Andes of Peru and Ecuador. The Incas cultivated the wild tree. | Wikipedia

One of the most unusual autumn fruits on sale in Mallorca is one many of us are likely to ignore. We do so partly because we are unfamiliar with it but also because some of us can’t be bothered with the biggish black seeds scattered on its soft white flesh.

This fruit is the chirimoya, which becomes cherimoya in English, but I’ll use the Spanish spelling because that’s how you’ll come across it at market stalls and in supermarkets.

The chirimoya name comes from the Quechua language spoken by the people that made up the dominant group in the Inca empire. In this language ‘chirri’ means cold or refreshing and ‘muya’ is a circle.

The fruit comes from the Annona cherimola tree, native to the Andes of Peru and Ecuador. The Incas cultivated the wild tree.

Unlike so many other New World fruits, the chirimoya was rather slow in making the transatlantic crossing: it is extremely fragile and not a good traveller. Another disadvantage is that the seeds must be grown in temperatures more akin to the Tropics than to Europe.
The Israelis, the greatest pioneers in the cultivation of tropical fruits, grew chirimoyas and eventually marketed them in Britain and other European countries. Even in the early 1960s, it was almost impossible to find a chirimoya in London. But everything changed a few years later with the influx of West Indian immigrants who wanted to cook with fruit and vegetables from the Caribbean.

Spain was an early producer of chirimoyas when growers in the south of Spain followed Israel’s lead and started to cultivate a wide range of tropical fruits. The Spanish growers had varying degrees of initial success but eventually found a niche in the international market for their chirimoyas. Most chirimoyas now sold in Britain are imported from Spain.

The chirimoya is just one member of the rather large Annona family, another two varieties being the custard apple and the sour-sop. All three have the same white pulpy flesh with a consistency that is reminiscent of sops, the dish of bread and sweet hot milk that used to be popular in Britain. 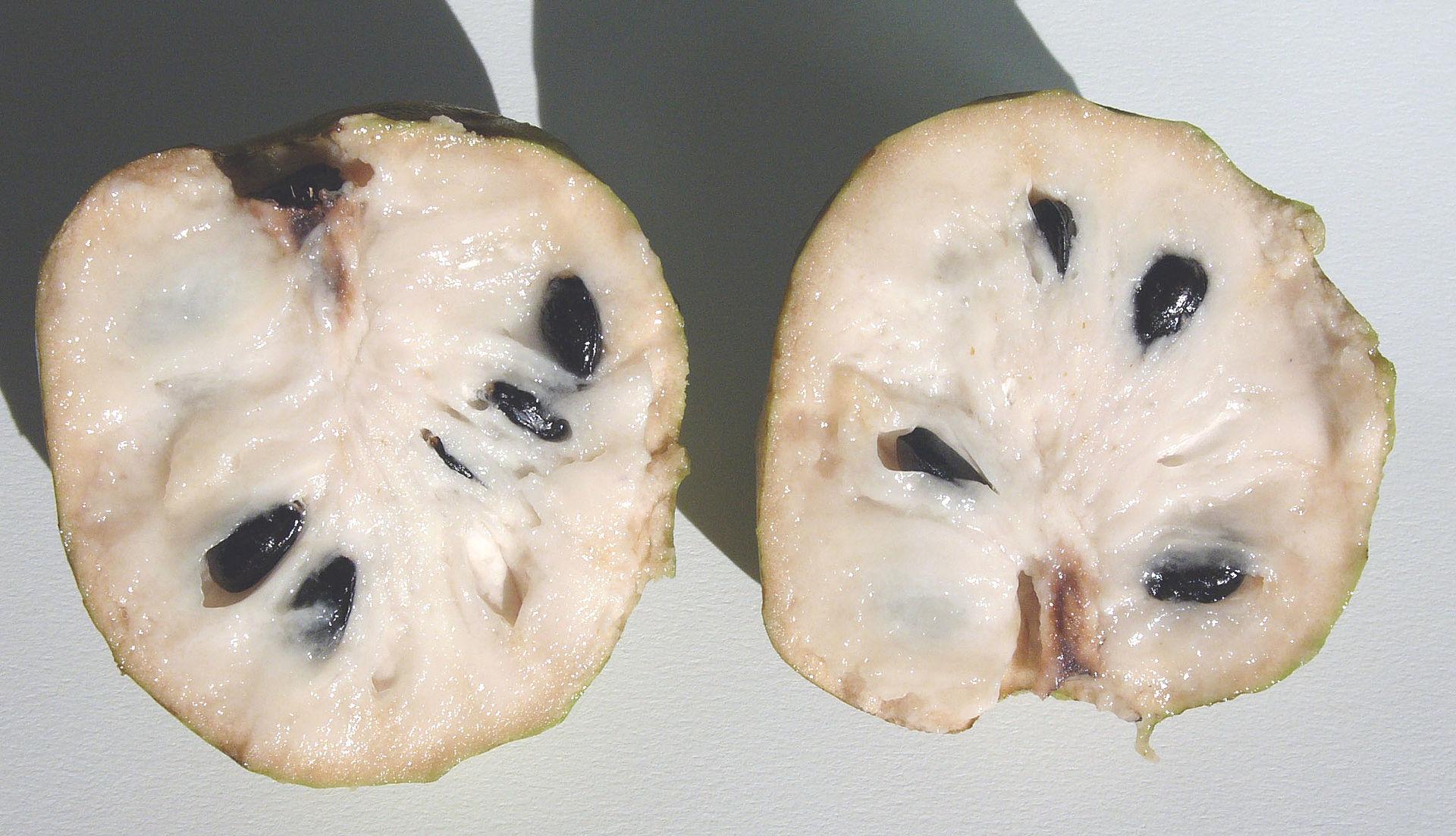 Sour-sops, as the name suggests, are a good deal less sweet than the custard apple and the chirimoya, which is speckled with biggish seeds like small pebbles, very hard and shiny black. These seeds are a huge nuisance for many people, but they are easily extracted and they shouldn’t put you off eating this unusual fruit.

The flesh is so soft and custardy it is considered to be Nature’s most successful attempt at making a ready-to-eat dessert. Eating a chirimoya as it comes is like tucking into a pudding made by a rather discerning creative cook. It has everything: texture, taste, and black attractive seeds that are highly decorative.

The chirimoya, however, doesn’t have an especially pretty exterior. It is roundish, sometimes oval-shaped and the pale green leathery-looking skin seems as if it were designed for covering a snake or some other reptile. It looks like one of the sturdier fruits but it is most delicate, especially when fully ripe, and must be handled with great care. When taking them home from the market, they must always go on the top of your basket. If not, you’ll end up with pulped chirimoyas.

You should buy them unripe and keep them in the kitchen until they are ready to eat. You’ll be less likely to crush them on the way home and you’ll also be eating them at their optimal point of ripeness. Mallorcans are extremely fond of them and you’ll find chirimoyas at most market stalls and supermarkets.

Their price has remained incredibly steady over the years. I saw them in Mercadona last week at €2.89 a kilo — in 2000 the price was €1.89. That’s an average increase of five centimos a year over 20 years. That makes them a very good buy.

Chirimoyas are the easiest dessert fruit to prepare for the table — because there is no preparation involved. When eating a small one, cut off a thin slice from the top and scoop out the flesh with a teaspoon. If the chirimoya is a large one, expose the flesh by cutting it in half. They are so sweet and have such a delish pineapple-custard taste that you have a dessert at a stroke — the stroke of a knife that cuts them in two.

Some people eat chirimoyas with a dish of cream on the side and add it to the flesh. But I don’t think the custard-like interior needs any help from cream. The very hard seeds are easily separated in the mouth and discarded. The pulp of a chirimoya is so soft it is easily sieved and added to sauces, other desserts and drinks. You can make superb ice cream by adding cream, sugar and a little lemon juice to the sieved pulp. The same mix can be used as the base of an iced soufflé.

The sieved flesh has such a fine texture and enticing taste it can be used as it is as a sauce for other desserts. On hot summer days the sieved flesh can be turned into a delightful and refreshing drink by adding five times its volume of ice-cold water. A little lemon juice can be stirred in, but extra sugar would make it too sweet for most people.

Yoghurt and chirimoya pair nicely and a creamy dessert is easily made by adding the sieved flesh to thick Greek-style yoghurt with a dash of lemon juice, a drop of vanilla essence, sugar to taste and a little whipped cream.

As the chirimoya flavour is so reminiscent of pineapple, another scrummy dessert is made by mixing the sieved chirimoya flesh with pineapple juice and sugar and heating it in a small saucepan until it is about to boil. Take the mixture off the heat and when it is cold stir it into whipped cream. It is well chilled before serving on its own or over crushed pineapple.

To make this dessert for six people you would need; two kilos of chirimoyas, 100 grs sugar (or to taste), 250 mls pineapple juice and 250 mls of cream. Some cooks add finely chopped fresh pineapple to this mixture. 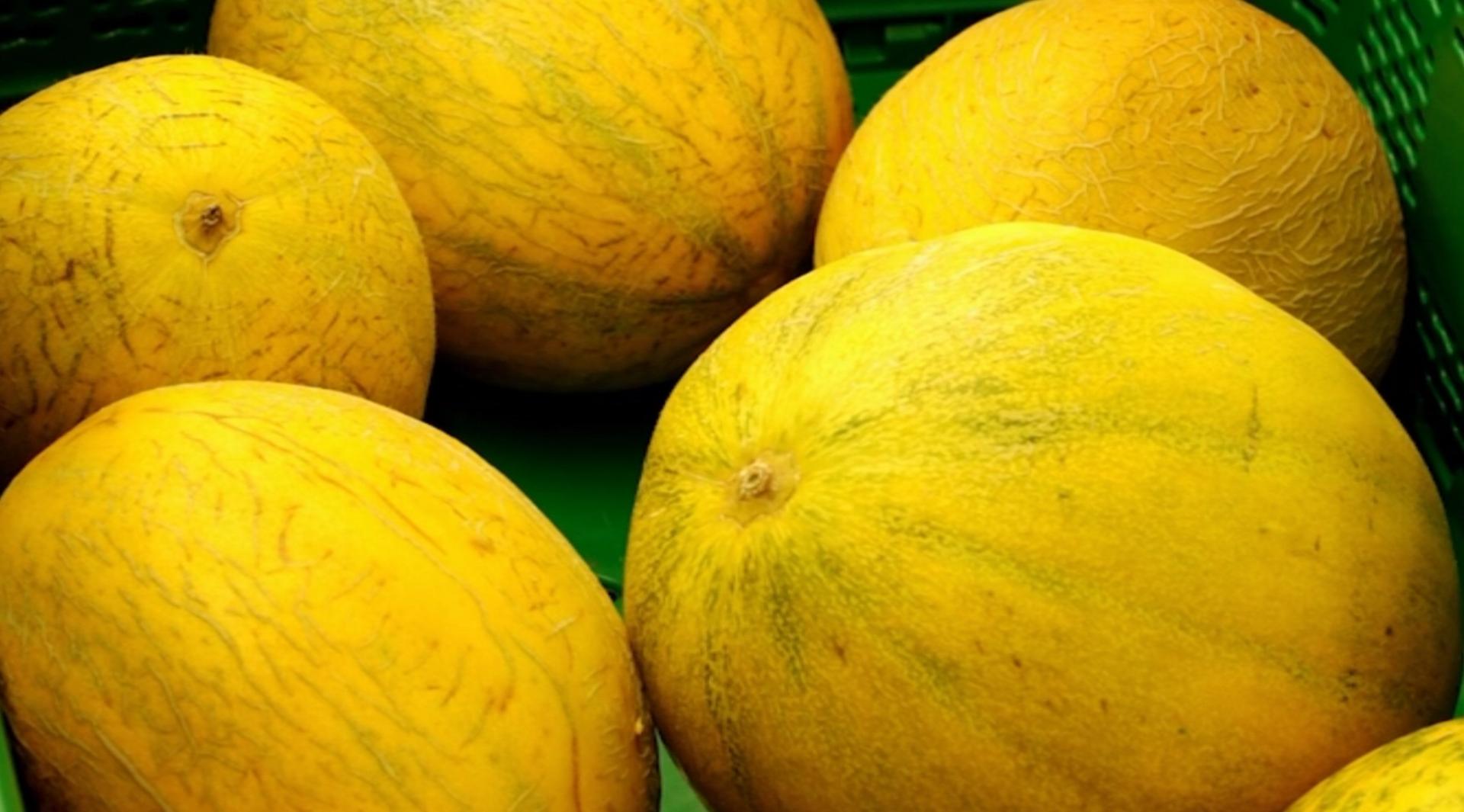 Although melons are a summer fruit par excellence, a few of the Mallorcan varieties aren’t in season until well into October. In some Mallorcan homes one of these late melons, popularly known as ‘piel de sapo’ because of its rough toad-like skin, is put into a string bag and hung in the pantry to be eaten during the Christmas season.

Another variety that is now at every market stall and supermarket is the highly popular ‘marina’, which is for immediate eating. It is smallish (half of one is a serving), soft-fleshed, highly perfumed and extremely juicy. The flesh is so soft that half of one sliced through the middle, with seeds and fibre removed, can be eaten with a small spoon as dessert. It is low-cal and ideal for weightwatchers.

A melon is like a bottle of wine in that we can be well aware of its realistic potential but we shan’t know what it tastes like until we open it. Even so, there are ways of telling if a melon is likely to be a good one.

If choosing one at the supermarket (but not at market stalls where customers cannot touch the fruit) first test its weight. If it feels heavy for its size it is full of liquid, so it will at least be juicy. If you can’t make up your mind about two melons, have them weighed and take the heavier one.

A melon is ripe if it feels tender at the blossom end, opposite the stalk. And if the stalk comes away with a gentle pull, that is another sign of ripeness. But you can do that test only after you have bought the melon and are otherwise sure it is ready for opening. Another sign can be detected in the crown that forms round the stalk end. When it emits a fruity perfume, the melon is perfect for eating.

Apart from being the ideal dessert fruit, a melon also makes a superb starter, although serving it with Iberian cured ham has become a bit of a cliché. You can present this dish in a different way, however, by arranging the slices of ham around a large flat platter, leaving a space in the centre for smallish cubes of ‘sapo’ melon drizzled with lemon juice, a little sugar to taste and a mere sprinkle of ground ginger. 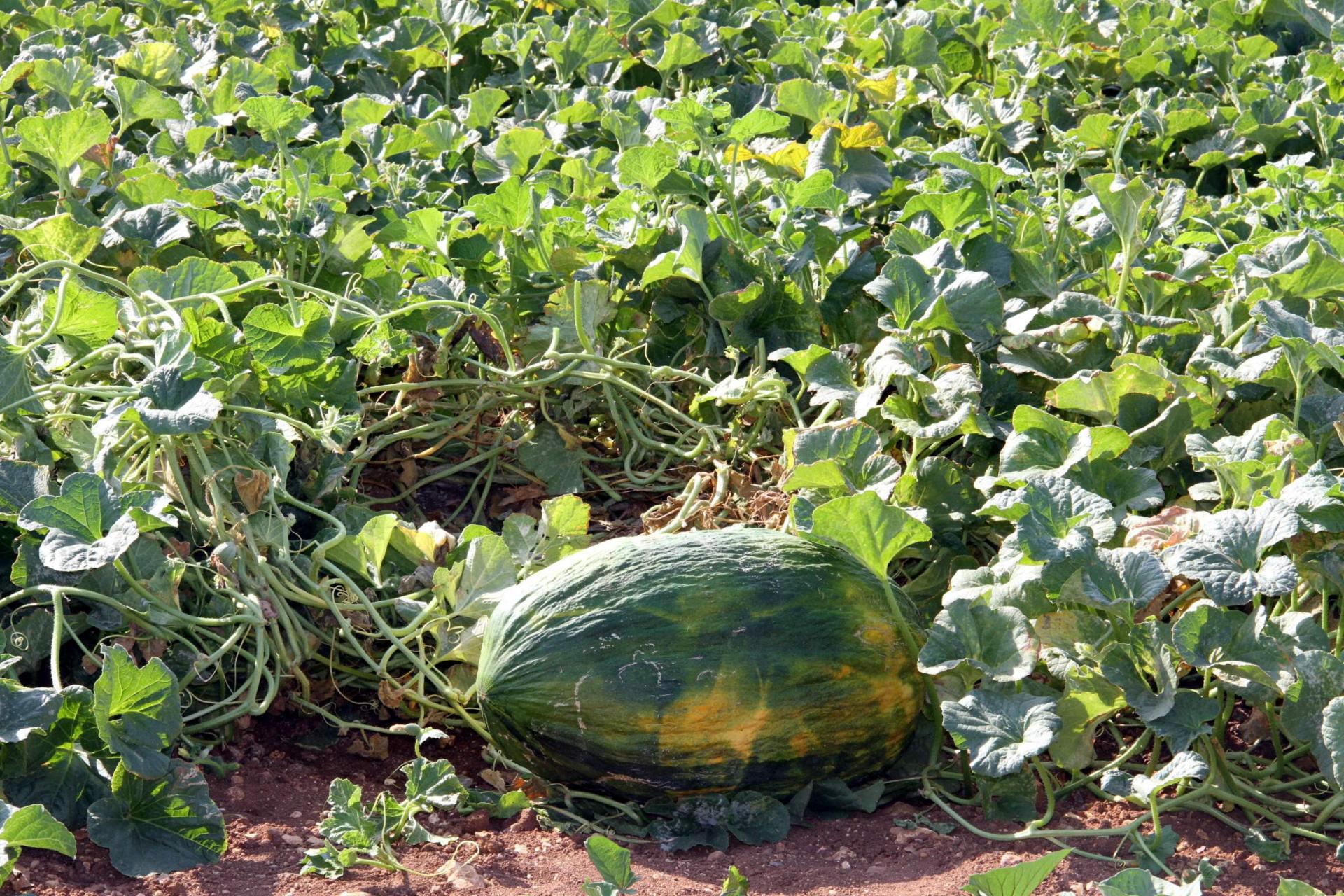 Sliced ‘sapo’ without the rind also makes a refreshing start to an early autumn meal. The melon slices should be fridge-cold and each diner should season them to taste with salt, pepper, and a pinch of ground ginger or cinnamon.

If you are serving your usual lamb or chicken curry, have a side dish of ice-cold cubes of ‘sapo’ melon dressed with lemon or lime juice and a single ground spice. It can be ginger, cloves, nutmeg, cinnamon, cumin or a good smoky paprika. Do not be tempted to use a curry powder or a haphazard mix of spices. Melon dressed like this also pairs nicely with chargrilled meats.

Melon with port is another of those old favourites that has become somewhat too ubiquitous. But we can make a small effective change by using one of the sweet white wines produced by some of the top Spanish bodegas.

Get one of the smallish ‘gaia’ melons (not the ‘marina’ because the flesh is too soft) and slice off the top, which will be used as a lid. Scoop out the seeds and fibre and fill the cavity with a sweet wine.

Replace the reserved top, wrap in clingfilm and keep in the fridge overnight. When ready to serve, pour the wine into a jug, slice the melon into wedges, remove the skin, arrange on plates and drizzle with the sweet wine.

A fine wine to try is the Veritas Dolç 2019 from the José L. Ferrer bodega in Binissalem, which last week was recognised as one of the world’s best moscatels when it won a gold medal at Moscats du Monde 2021 contest in France.

Veritas Dolç, which the Ferrer bodega first produced 15 years ago, is made with a grape variety that has especially small berries, called ‘moscatel de grano menudo’ in Spanish. It is a fruity floral wine that should be served very cold — connoisseurs keep in the freezer for an hour before serving it.

Like all of the finest moscatels, Veritas Dolç has a lovely rich sweet taste, but with enough acidity to make it non-cloying. It sells for around €17 for a half litre bottle.

You can drink it with all kinds of desserts and also foie gras, top quality pâtés and cheeses, including the best blue ones such as stilton, roquefort and gorgonzola.

When having friends to dinner I drop dessert and serve instead Veritas Dolç with petits fours, the kind sold in good pastry shops under the name of ‘pastas de té’.

I serve it in the tiniest and most elegant stemmed glasses I have, but single shot glasses, like those used in bars for ‘chupitos’, are also suitable.

Everyone I know adores Veritas Dolç with ‘pastas de té’ and both are so moreish they always bring dinner to a rollicking end. Try it and see.