When we are planning an anniversary meal at home for the family, it is sometimes quite difficult to think of a dish that will make the meal a memorable one for everyone.
If there’s a special family lunch or dinner in the offing that you want to end on a culinary fanfare, there’s a Spanish speciality that will be quite unknown to most of your guests — even the Spaniards among them.

This little item is one of Spain’s most magnificent cheeses — and it is also one that is little known within the country and abroad.

If you were to ask your Spanish friends and acquaintances if they had ever tasted Torta del Casar, the majority would say no and several of them would never have heard of the name — so they wouldn’t even know it’s a cheese.

Torta del Casar is an unusual and unique cheese that is available only at specialist shops or in well-stocked supermarkets. The key to understanding Torta del Casar is the word ‘torta’.
It means pie, tart or flan and the cheese is given that name because it is in a round natural skin-like casing and not very deep — but also because of the singular way in which it is cut.

Instead of being sliced or cut into wedges, which is how we deal with most other cheeses, one carefully cuts round the edge of the Torta del Casar top and lifts it off in one piece, as if it were a lid. That is when it looks like a pie, tart or flan.

The reason for opening the cheese in this way isn’t some gimmick or a foodie’s whim — this method is absolutely essential if we are to enjoy the cheese to it fullest.

Another Torta del Casar characteristic is that the cheese within its outer skin is thick and unctuous, as if it were melted. The ideal way to eat Torta del Casar is to scoop the cheese out of its thick natural skin mould with a short broad knife or a small spoon, and then spread it on bread, toast or biscuits. I have seen avid Torta del Casar lovers eat it direct from the spoon.

If Torta del Casar is so unusual and so splendid, why is it so little known in Spain and the rest of the world?

Part of the reason is that production is extremely low, so it is not so widely available as other top cheeses such as Cabrales, Idiazabal or Roncal.

Torta del Casar is also one of Spain’s more expensive cheeses, so it is out of the scope of many people’s weekly food budget.

There is yet another little problem. As the texture of Torta del Casar is almost that of melted cheese, it cannot be sold in slices or wedges, so customers must buy a whole one.
But the majority of shoppers don’t want a whole cheese weighing a kilo or half a kilo — and most people miss out on Torta del Casar.

But the makers have addressed that little problem and produced the cheese in smaller formats. Torta del Casar, however, is still an expensive cheese and for most of us a treat for special occasions.

As the cheese isn’t as well known as it should be (even for those who can afford it) the Torta del Casar Denominación de Origen Protegida (DOP) visits different parts of Spain to promote the cheese.

Officials from the DOP body, which guarantees the authenticity of all Torta del Casar cheeses with their distinctive red and gold label, some years ago did a bit of PR work in Palma with the help of top cook Koldo Royo, who had his Michelin star restaurant at that time. 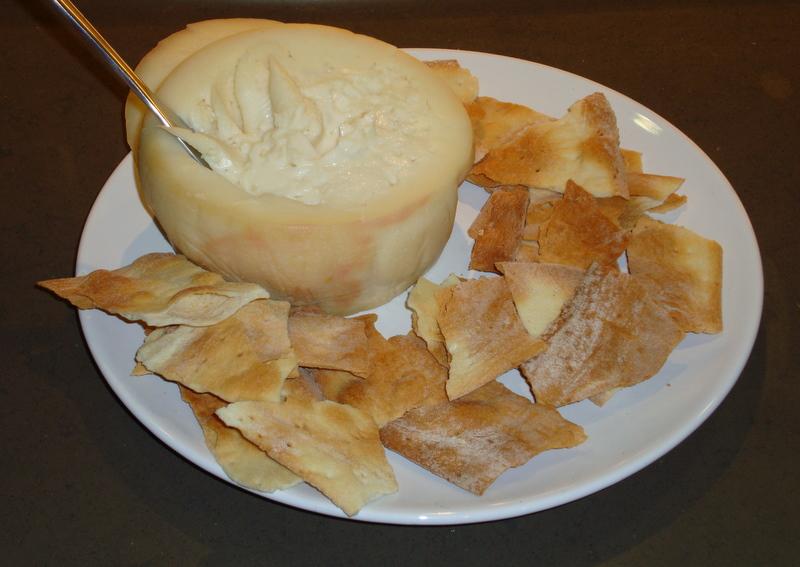 Koldo’s contribution to the PR effort was to do a tasting menu that featured Torta del Casar in every dish from nibbles and starters to dessert.

Tiny tapas included a strawberry stuffed with the cheese, and a cream of pumpkin soup afloat with snippets of the cheese.

The first starter was a tomato salad and little globules of Torta del Casar and a macaroni impregnated with the cheese and truffle oil.

The fish course was grilled mackerel with grilled potatoes topped with Torta del Casar. The meat dish was rack of lamb in its own juices with a creamy Torta del Casar sauce.

Dessert was a crunchy fig spongecake, with Torta del Casar and prickly pear ice cream.
Koldo, whose restaurant in those days was one of the first to include Torta del Casar on his cheese board, said at the time that the cheese has special qualities that make it unique.
Koldo used to buy his cheese direct from a supplier in Casar, about 10 kilometres north of Cáceres, the capital of Extremadura.

But there’s no need for us to go that far to get some Torta de Casar. You’ll find it at the Fausto Izquierdo stall in the Santa Catalina market as well as the supermarkets of El Corte Inglés in Avda Jaime III and the Avenidas.

One of the best ways of dealing with a biggish Torta del Casar is to have it on its own for a light lunch main course with 6-8 people at table, plus three suitable wines and a selection of good breads and biscuits.

Have it with reds that have plenty of body or whites that have been aged in oak. You could also try a cava, an oloroso sherry, and even a cream sherry that’s not too sweet.
You’ll get maximum enjoyment out of this cheese by ruling out any kind of accompaniments. Don’t even do a salad.

Have a cream soup as a hot starter (such as Koldo’s cream of pumpkin), his macaroni dish or a light fettuccine.

One of the beauties of having a Torta del Casar in this way is that it would be used up in one meal. If the cheese is eaten over two or three meals, it has to be kept in the fridge and taken out at least an hour before it is needed.

Temperatures that fluctuate are never good for cheeses, especially such a delicate one as Torta del Casar.

A meal in which Torta del Casar is the top-of-the-bill act could end with a hot or cold dessert that’s everyone’s favourite.

Some years ago I tried the cheese with fidelini, an ultra-thin Italian long pasta that is my favourite.

I made a plain sauce with fresh ramellet tomatoes and when it was thick and smooth and vary hot, I stirred in some Torta del Casar. As the cheese is so soft it quickly combined nicely with the tomato sauce.

This was a rich dish, so it was more of a luxurious starter than a mains. I didn’t use any grated parmesan because it would have overwhelmed the subtle but distinctive flavour of the Torta del Casar.

This cheese is made from unpasteurised merino ewe’s milk and it is aged for two months. Merino ewes give very little milk, another reason why Torta del Casar production figures are so low.

The cheese has a marble-like colour, a creamy texture, intense aromas, an exquisite slightly bitter taste and it is not very salty.

It should always be served at room temperature, about 21C. Never eat it direct from the fridge or you’ll miss out on its delicate taste.