In Spain some of the finest gourmet products come dried in salt or packed in a tin!

Anchovies in a tin. | Marc Fosh

It’s no secret that the Spanish are great fish-eaters, second only to the Japanese who are the world’s leading consumers of fish. This taste for fish and seafood has developed out of a number of different factors - geographical, historical, cultural, and even religious. The Mediterranean peoples have always known how to utilize the food offered by the sea. Fresh and preserved fish and shellfish were not only an important source of proteins for the Phoenicians, Greeks and Romans, but also figured large in their intense trading activities until the discovery of canning, drying in the sun and salting were the most frequent methods of preserving fish.

Spain’s love of salted fish started when the first salting plants were set up in Spain by the Phoenicians and in the town of Cádiz for example, coins have been found bearing the image of a tuna fish, indicating how important tuna fishing and preservation were for the local economy, now over 2,000 years later, mojama, which is the fillet of tuna salted then dried for several days, is still one of the most typical and popular delicacies all over the Andalusian region.

Today, Spain is also one of the most outstanding producers of top-quality canned fish and many Spanish canned products are considered of gourmet quality. So much so that over the last few years this obsession has led to some of the best and most traditional tapas bars of Barcelona including Quimet i Quimet, Casa Lucio and El Xampanyet, base their menus almost exclusively on canned fish and seafood.

The art of conserving dates back to the late eighteenth century when Napoleon Bonaparte offered a 12,000-franc reward to anyone who could come up with a method of food preservation that could keep his armies fuelled while conquering the world. Firstly the confectioner Nicolas François Appert invented a system for the airtight conservation of food by Bottling and a year later, Pierre Durrand patented his own method using a tin can, which would become a cheap and reliable form of keeping almost anything fresh and edible in much the same way that adding large amounts of salt to food 2000 years earlier.

I have to say that the Spaniards have made it an art form and will often set aside precisely the best parts a fish just for canning.

These include the belly (Ventresca) of Albocore Tuna (thunnus alalunga) from the Cantabrian Sea that I just adore. Also, along the rich coasts of Galicia top-quality crustaceans and molluscs are fished and cultivated, many of them for canning, such as clams, oysters, cockles, razor clams and scallops.

Perhaps the most prestigious semi-preserve, one that must be kept refrigerated, are the anchovies that come especially from the Cantabrian coast and from a small fishing village called L’escala on the Mediterranean coast in Catalonia. These really are an expensive delicacy but they do pack so much flavour.

The fish preservation industry is a very dynamic one, and new preparations and specialties are constantly being introduced onto the market. An example is the recent development of sturgeon farming in areas such as Sierra Nevada in Granada and Lleida for the purpose of canning the caviar. Fish preserves are normally consumed at room temperature. They are excellent ingredients for salads, and can just as well be served on their own, as an aperitif for a distinctly Spanish flavour. 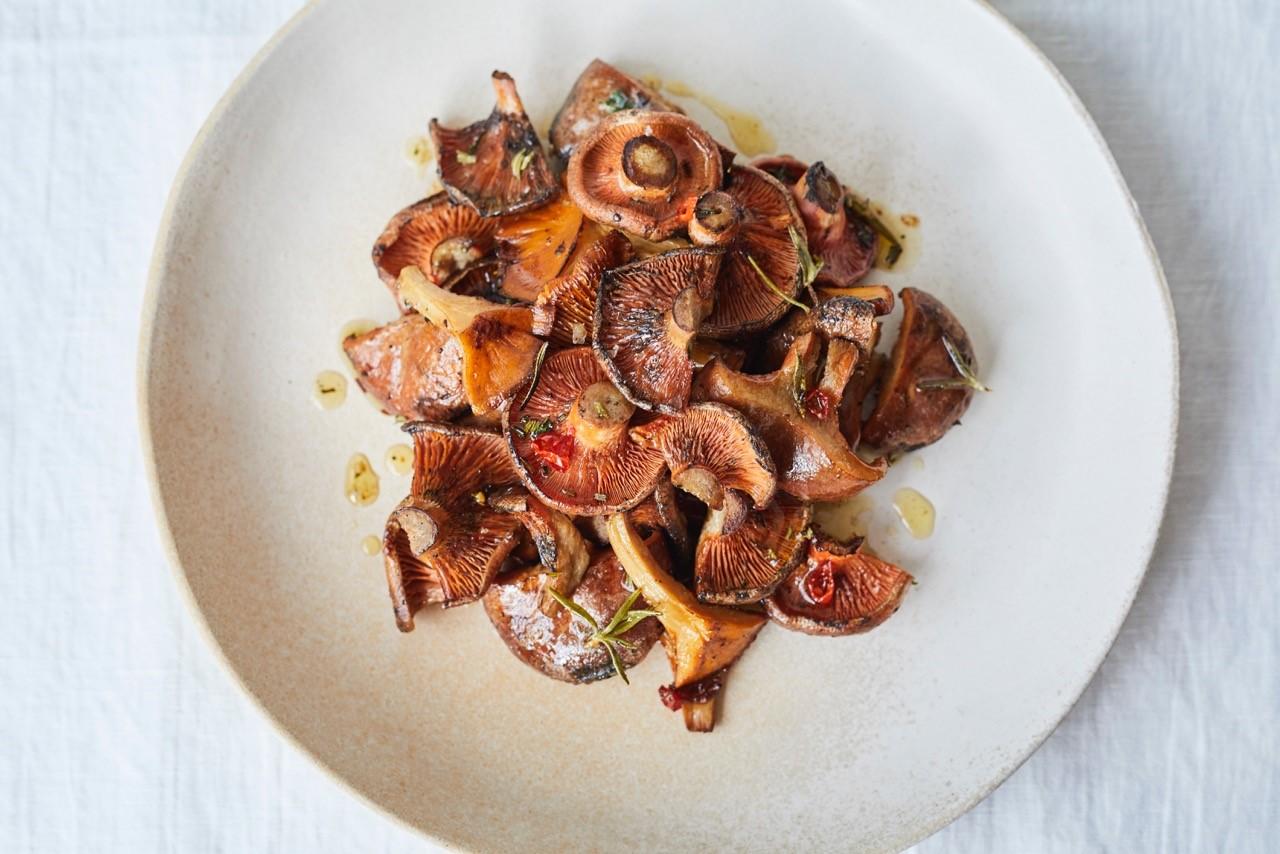 Here in Mallorca, look out for “Esclata-sangs”. They are large, big flavoured mushrooms that are just perfect for grilling or roasting.

For the anchovy butter

1 For the anchovy butter, place the butter into a bowl and add the lemon zest, chopped anchovies, garlic and chopped Paisley. Mix to combine and Season with Black pepper.

2 Place the butter mixture onto a sheet of cling film or baking parchment laid out on a clean work surface, and roll into a log. Place the prepared butter log in the fridge and leave to chill until firm.

4 Arrange the mushrooms in a roasting tray in a single layer, then cook for 15 minutes.

5 Remove the mushrooms and pour away any excess liquid, then add 4 or 5 slices of anchovy butter, rosemary, olive oil and balsamic vinegar. Mix well and return to the oven for 10-15 minutes until tender.

6 Scatter with a little chopped parsley before serving, season and serve with crusty bread. 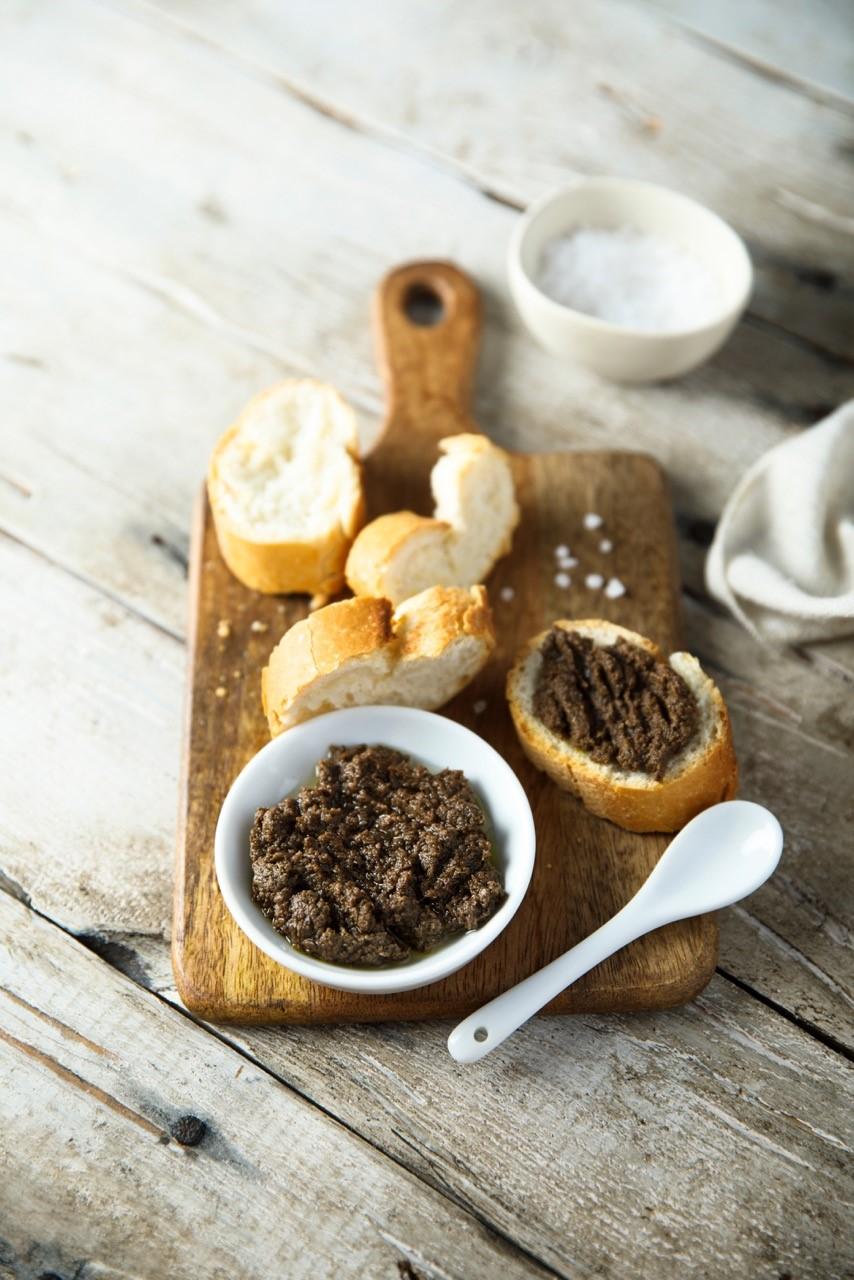 Begin a meal with a superb variation on a tapenade that tantalises and stimulates the taste buds. Anchoide makes great tempting canapes served over a little freshly toasted bread a glass of well chilled Champagne or Cava. Its easy to make, yet tastes divine.

1 Wash the anchovies under cold running water and drain well on kitchen paper.

2 Place all the ingredients in a food processor and blend to a fine paste.