Mountaineers on Everest have reported seeing Choughs at altitudes of 26,900ft

There have been a few sightings of Jackdaws from the south recently. A rare vagrant on the island. Annually there are a few sightings usually from the Arta area, where they share the same habitat with the equally rare Red-billed Chough - or as I like to simply call them, Choughs. The Raven is a resident member of the crow family here, but Carrion Crow and Rook have both been recorded as rare vagrants, as has the Alpine Chough, the latter again from the Arta region.

This week I am going to look at the Jackdaw and Chough. The Jackdaw (Corvus monedula), sees Monedula coming from the Latin word ‘moneta’ which means ‘money’ (like Magpies they have a habit of picking up shiny objects such as coins). Corvus in Latin and can mean either ‘crow’ or ‘raven’. Jackdaws are two species belonging to the genus Coloeus, who are related to (but generally smaller than) the crows and ravens (genus Corvus). The species we see here is the Western Jackdaw - which breeds in the British Isles and western Europe (Scandanavia, northern Asia and northern Africa. Its counterpart, the Daurian Jackdaw breeds in the east). 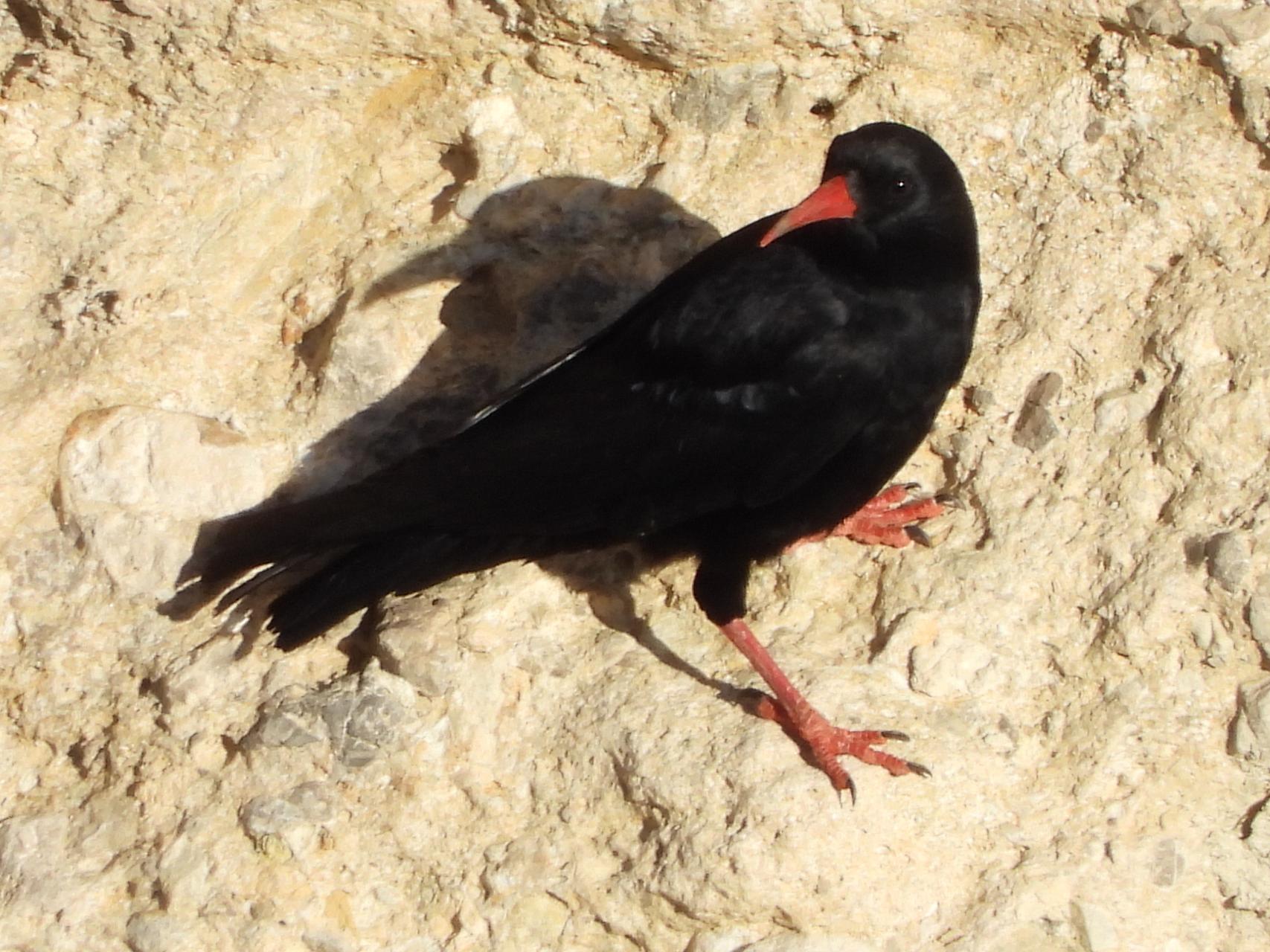 Moving around more outside of the breeding season than the other corvids, the Jackdaw is an easy bird to recognise, being overall black in colour with a grey eye, a dark bill and legs.

Sexes are alike, and close up views reveal a purple gloss on the black crown, and some blue gloss on the wings and back, and a greyish cast on the underparts. The grey eye on the adults is very distinctive. By the breeding season, the adult develops a grey nape which can stand out. They are one of the smallest of the crow family in Europe, and to me appear to have slightly broader wings than the Chough.

The voice is a short, loud ‘kjack’ which can be heard echoing across the cliff faces. They are an omnivorous species (feeding on a variety of food of both plant and animal origin), almost all of which are gathered on the ground. In towns and villages, they can be quite approachable.

The Chough (Pyrrhocorax pyrrhocorax) is quite a shy bird, and found around cliffs with open areas of short grass. Even from a distance, they can easily be told apart from the Jackdaw, as they have an entirely black plumage, with no grey nape, and a bright red bill and legs. Pyr is the Greek word for ‘fire’ (the legs and bill are fiery red). 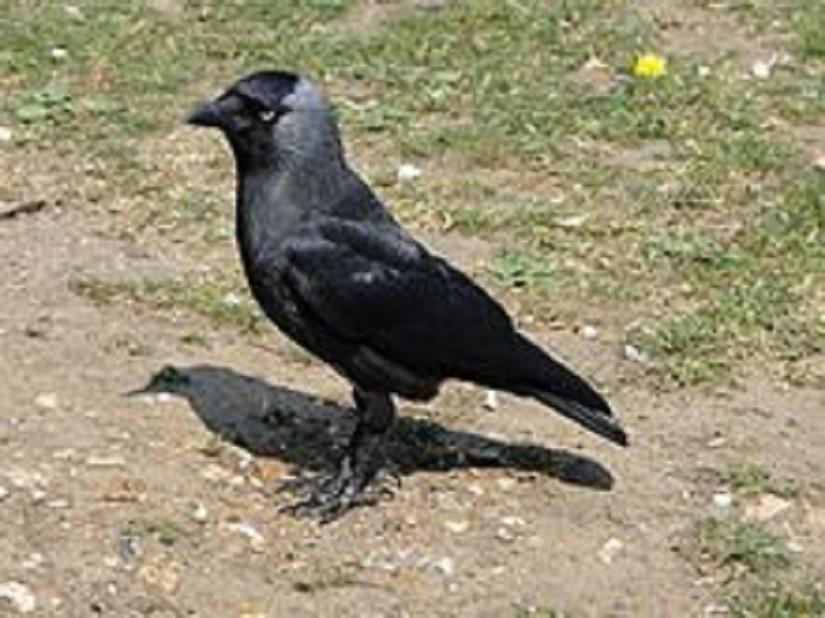 They are mountain specialists, and in their breeding range they have been reported nesting as high as 21,300ft. Mountaineers on Everest have reported seeing Choughs at altitudes of 26,900ft. 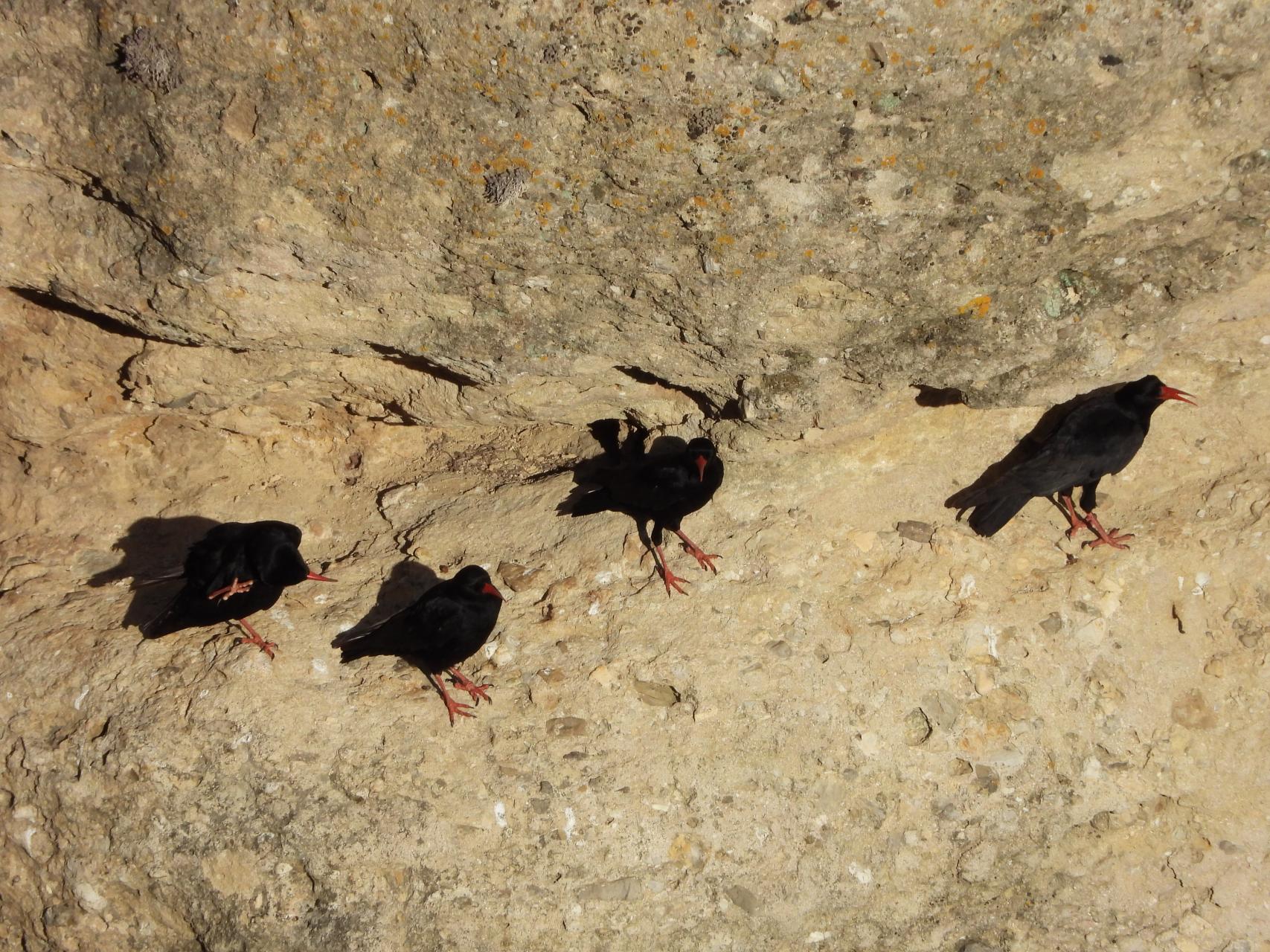 Inland crags and coastal cliffs form their habitat where soil-living invertebrates are sought. In the winter they will also take advantage of berries and grain. The black plumage does have a blue gloss to it, although the tail, tail coverts and flight feathers have a greener iridescence.

The bright red bill is downcurved. In the Alpine Chough, the bill is yellow and shorter. When the Chough is perched, they will often give a call and conspicuously flap the wings and tail to advertise their presence. They are gregarious and can be seen in small flocks flying along the cliffs. They are masterful fliers, often gliding and soaring on warm thermals and performing aerial manoeuvres.

Now, being in the depths of winter (with spring slowly on its way), fungi are still to be found. One to look out for is the Milk White Russula (Rusula delica), which generally grows as a single specimen, but can stand out as it can be quite large, and the white is certainly eye catching against the backdrop of the green grasses and vegetation. Now commonly referred to as the , some people still call it by its former popular common name - the Milk-white Russula - myself included.

The currently-accepted scientific name of the Milk White Brittlegill was established in 1838. The Swedish mycologist Elias Magnus Fries described this species, and gave it the binomial name Russula delica. Whatever you decide to call it, it is one of the largest mushrooms in the Russula genus, emerging from the earth and pushing up pine needles, turf or leaf litter; hence, the large off-white cap is usually badly marked and often damaged. 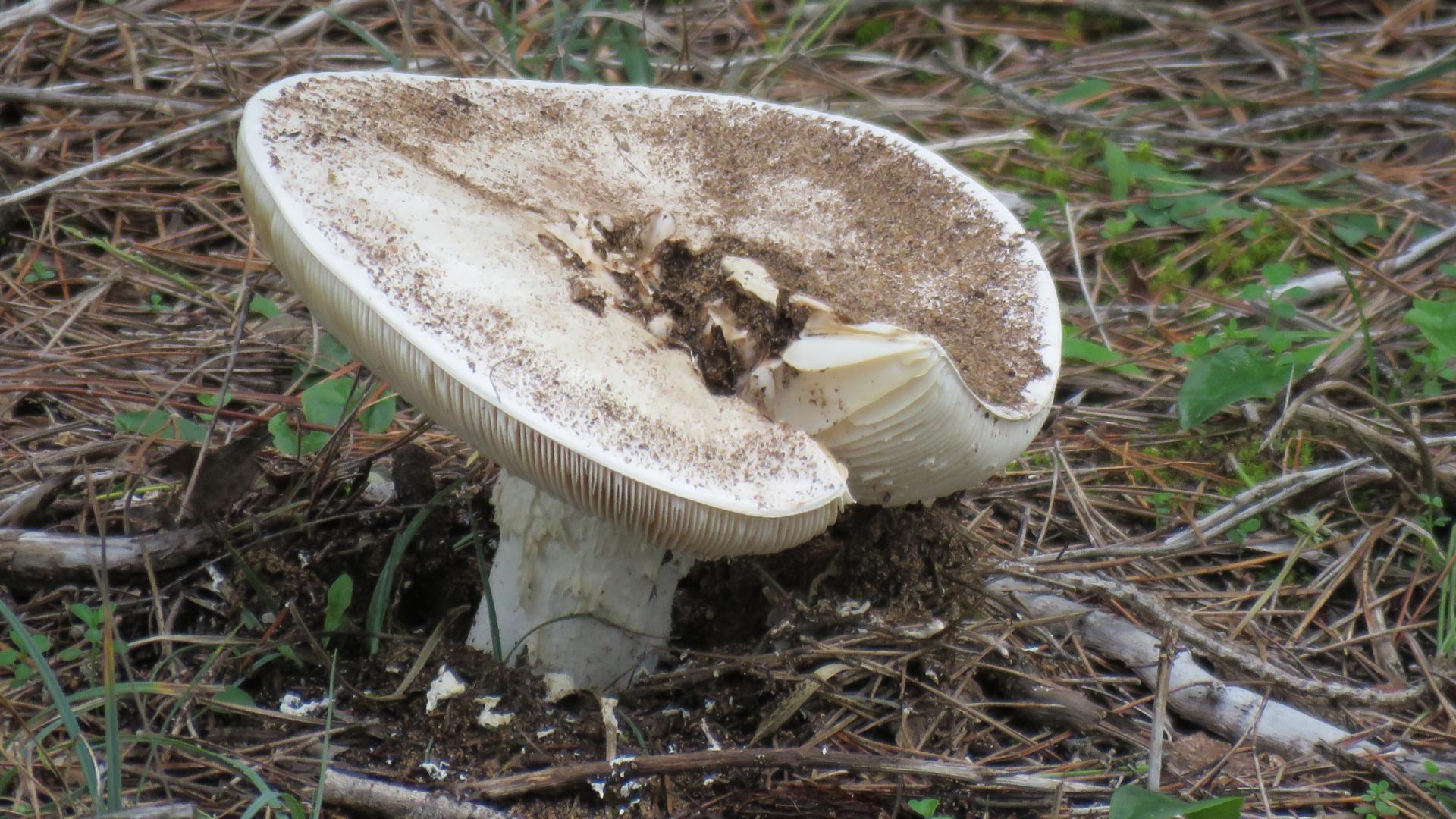 This particular photo I took was at Son Real, where it was indeed growing amongst the pine needles.

Although not considered poisonous, this mushroom has a poor flavour and is generally considered inedible or at least not worth collecting.

To be honest, edible or not, I always like to leave mushrooms alone to enjoy their life cycle and for others to enjoy them in all their glory. The cap can be 6.3 inches in diameter. It is white, usually tinged with ochre or brown, with an in-rolled margin, (which usually remains white). At first it is convex, but later flattens, and is often funnel shaped. This particular day at Son Real had been quite a productive visit, with several Boletus fungi found, a Firecrest in the pines and several groups of Crossbills, Southern Heather in bloom, and on the coast section, a small gathering of Turnstones and Dunlin.

Next time, we will look at the Giant Reeds and an often-overlooked little bird despite its numbers - the Moustached Warbler. Please note: my book is still available to purchase, Birds of Majorca, please email me for a copy.

I had no idea it was possible to see jackdaws and choughs here on Mallorca. I will be keeping my eyes peeled from now on! Where might we find your email address to purchase your book, Neville?