When the photo is done, the group stands up and gets back to work

On Monday I went to meet the people who are collecting aid for the people affected by the invasion of Ukraine. The volunteers at the Ukrainian Church are having their lunch as I arrive. They are sitting on the steps of the church surrounded by bags and boxes. There’s about twenty of them chatting in Spanish and Ukrainian whilst they eat their sandwiches.

I’m there to deliver some donations from my local gym CrossFit Mallorca, and to see what is going on. The church is surrounded by pine trees and it’s set back from the road in Arenal without an easy way to access it. An elderly lady arrives behind me, she is struggling with a shopping trolley filled with food to donate. A young man jumps up and helps her and then accompanies me back to my car for another load of bandages, baby milk and instant coffee. 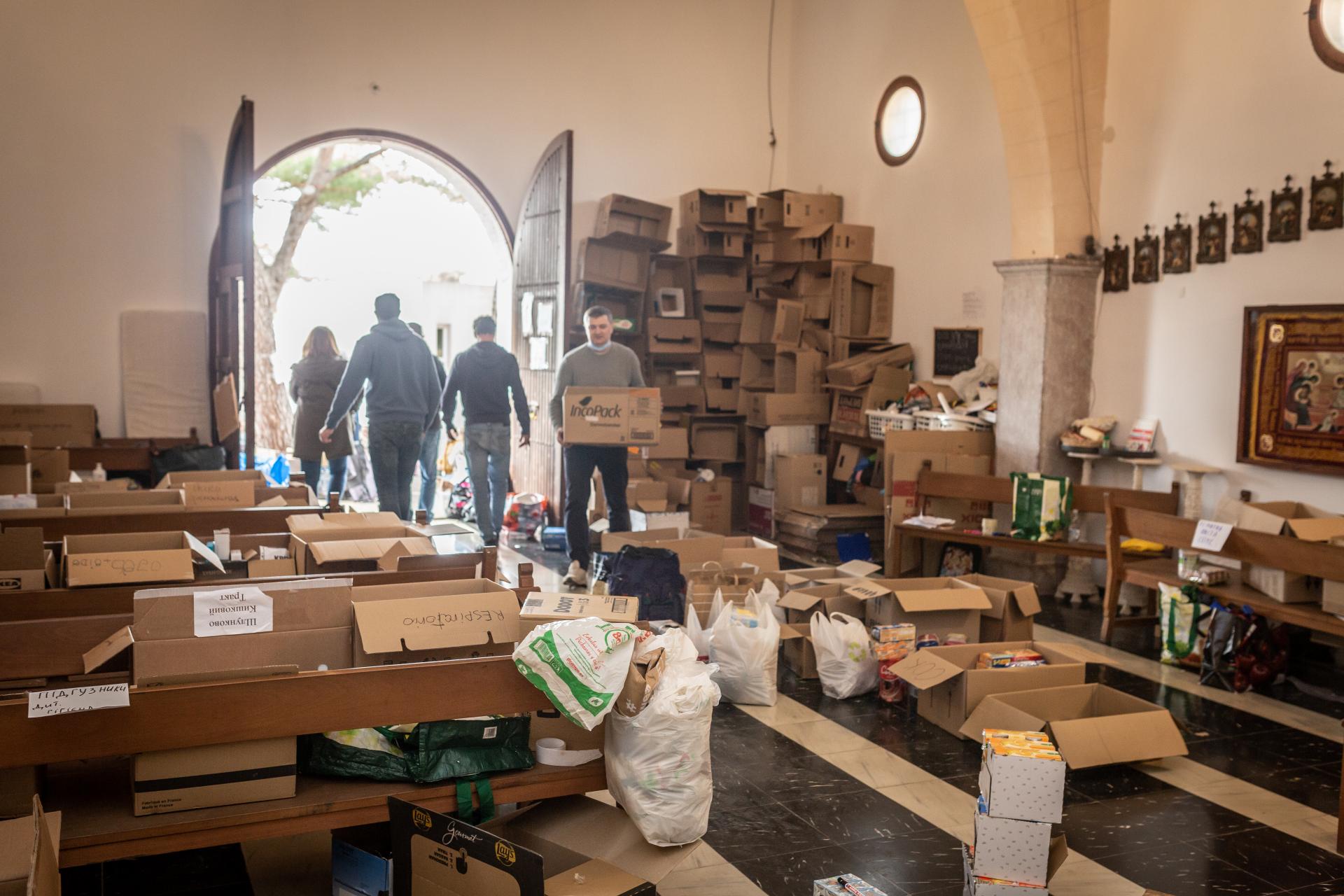 I wander into the church whilst the group is still eating and take a look around. The altar of the church has been carefully wrapped up against damage and all around it are boxes with words written on them, in Polish or Ukrainian I’m not sure. There’s a system it seems: the donations are being separated into categories and then packed up into cardboard boxes. There’s a tower of these boxes waiting to be filled.

It’s just as well because the group have already managed to send 20 tonnes of medical supplies and food. When the supplies reach Poland they are being distributed amongst the Ukrainian people who are fleeing their country. In front of the altar on a marble step are two little teddy bears, one has “Solidario” on his chest, I wonder if they will make it into a parcel bound for the refugees, mostly women and their children. I hope so.

As I step back outside of the church the group is finishing their lunch and they are standing up. Some of the women have blue and yellow ribbons tied in their hair, the colour of their flag. Then, led by a young woman they sing the Ukrainian national anthem. A few of the group quietly cry.

After the singing has finished I tentatively ask to take a photo which they agree to. In the many years that I have taken group photos, this is the first one I have ever done where I don’t ask them to smile, or do something silly. I gesture to them to sit back down on the steps of the church. They stare up at me silently, and I feel a huge wave of their sadness wash over me as the shutter clicks abnormally loudly.

When the photo is done, the group stands up and gets back to work. I speak to the woman who had led the singing, Kristina, she tells me that from tomorrow (Tuesday March 8th) they have a new building in Son Castello. The new centre will be at C/Gremi Picapedrers 1, Poligono Son Castello. It is the Fire Station. ASIMA, a business association, has helped them to secure this better space. I tell her I will come and see them again at their new depot and that I hope many more English speaking people will come and help as well. 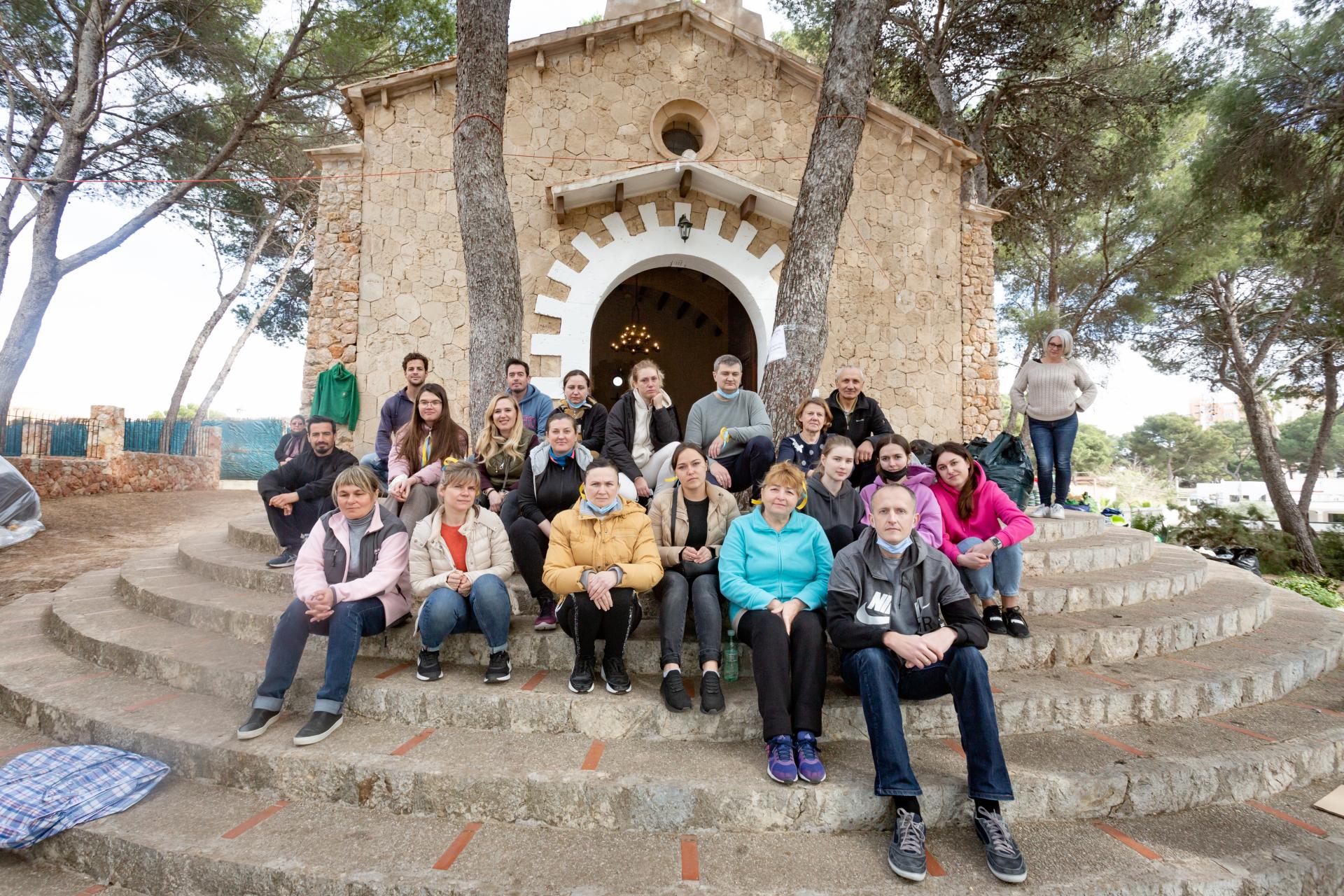 If you want to help they are collecting heavy industrial boots, backpacks, eye protection, knee pads, medical supplies, power bank chargers, sleeping bags, torches, canned food, tins of tuna and meat, canned pasta, instant coffee, dark chocolate, biscuits, baby food, first aid kits, gauze, bandages, hydrogen peroxide for wounds. One thing they cannot accept is general clothing or suitcases. Everything is packed into the cardboard boxes, wrapped up and shipped on pallets. They are also collecting night vision devices, walkie talkies, binoculars and tactical vests, but these items are mostly being bought using money donated to them. If you want to donate then send it to IBAN ES07 2100 6805 9302 0006 6471 The name of the account is the Asociación de Ayuda a Ucrania.

On a much lighter note, if you have always fancied yourself as a bit of a potter, then now is your chance to have a go and get your hands dirty. The workshop will take place on Wednesday 16th March at 7.30pm at the La Fiore glass factory where there is also a studio dedicated to ceramics and pottery classes. 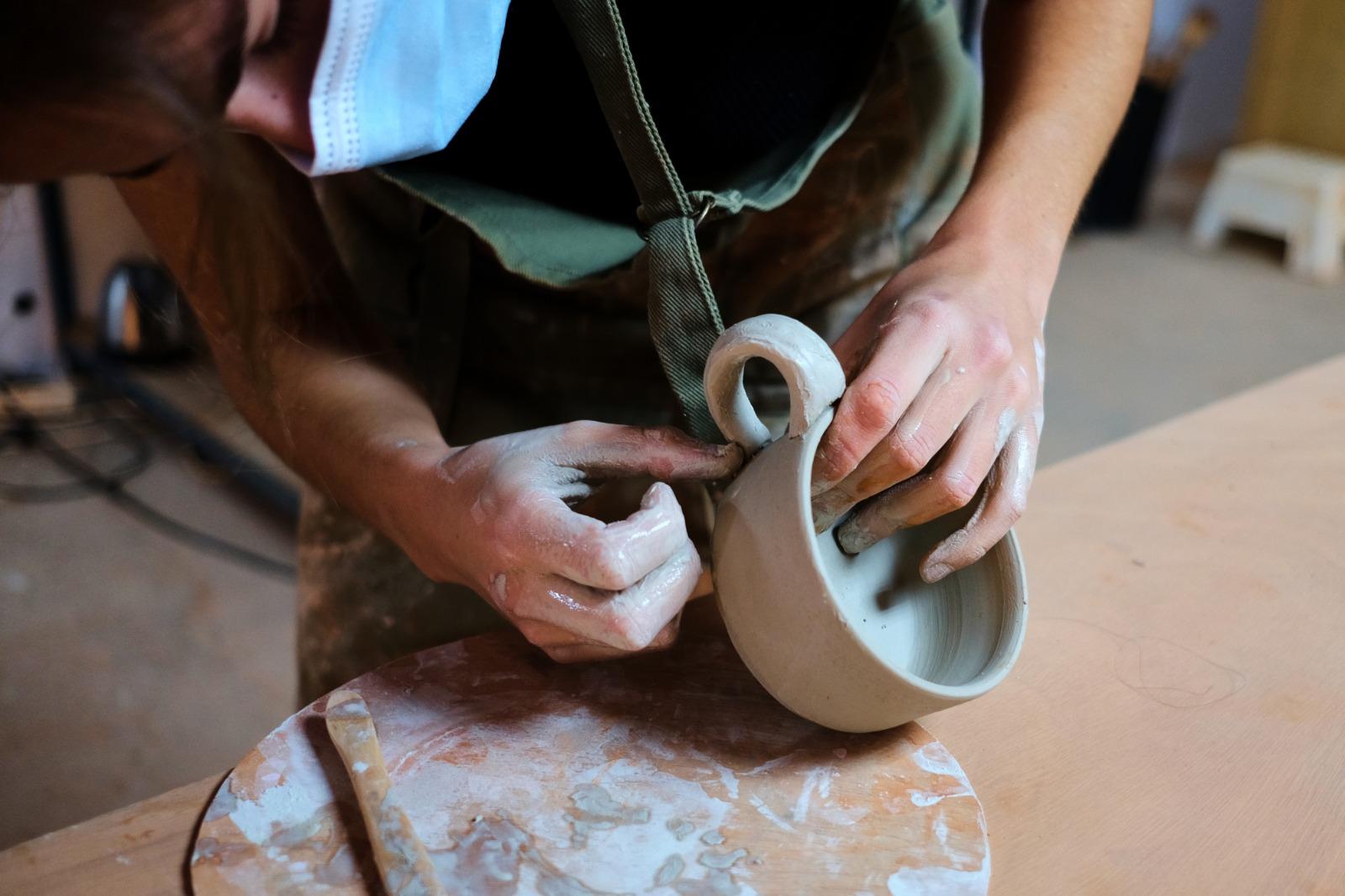 After an introduction to the ancient Mallorcan pottery techniques (and a wine reception for courage!) everyone will make 2 pieces each. This is a fun evening for newcomers to potting to share with old friends or meet new friends. €40 includes all materials, firing of the creations and refreshments. Booking is essential. Contact Virginia 696 43 91 44 or email Info@lavirceramica.com

After a month’s closure and a facelift, the very popular lunch spot in Portals Nous has reopened under new ownership. Lauren and her team were buzzing when I went past to see them briefly on Friday. “We’ve literally just stopped!” she told me at 4pm, “We’ve been busy all day, it’s been fantastic!” 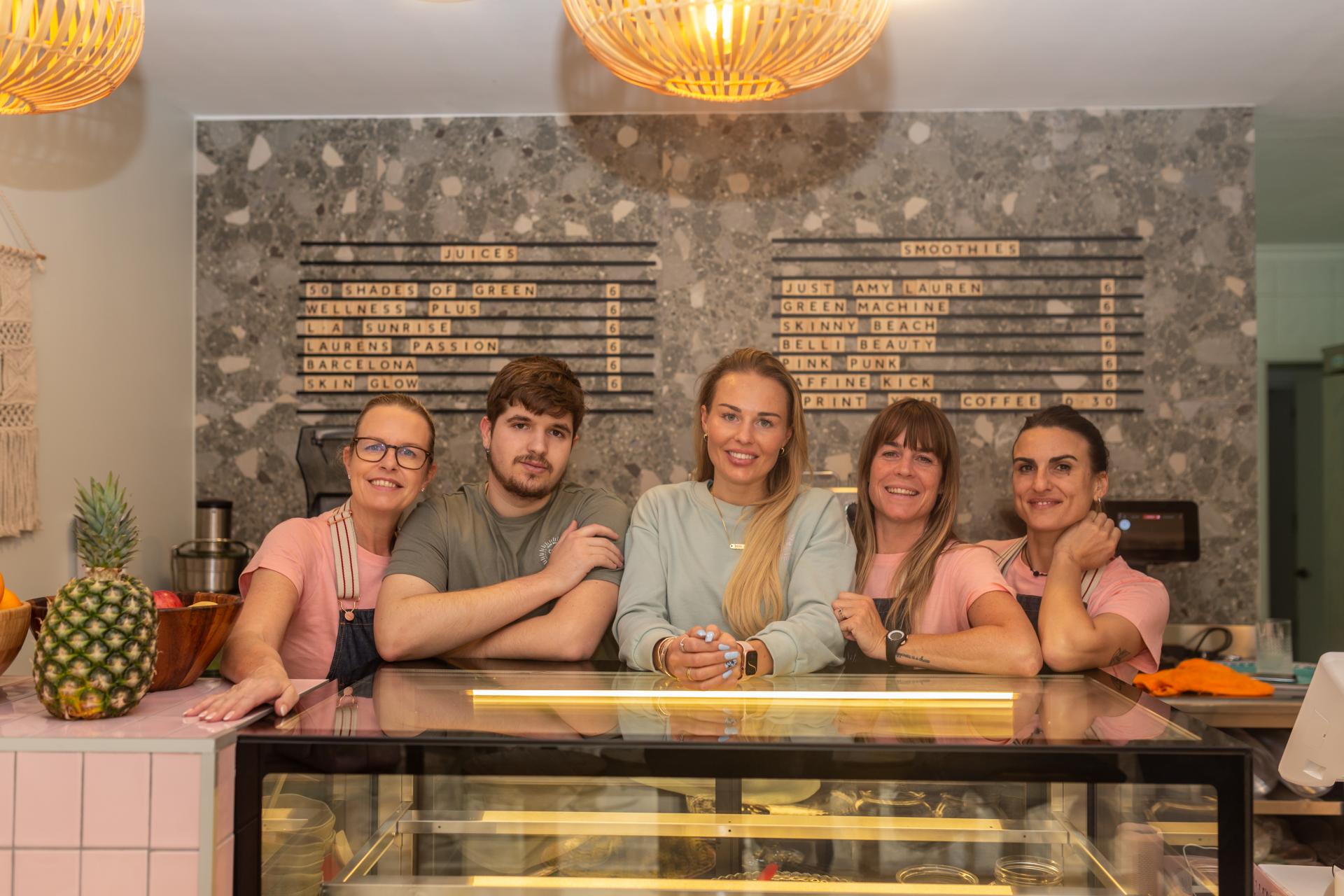 The Deli has retained several of its popular dishes, and added some new ones including a very promising vegan burger and a melon smoothie which I had the chance to taste. It’s great to see small businesses getting ready for the season! Tell me if your business is opening up soon, I’d love to know!

The Majorca branch of the Arts Society met on Tuesday in Son Muntaner to hear about the influence of the Moors on culture and art in Spain. The talk was given by an expert lecturer, Ian Cockburn, who was flown in from the UK specifically. The verdict was a resounding thumbs up from the audience, who also then went on to enjoy tapas and wine at the after talk gathering. 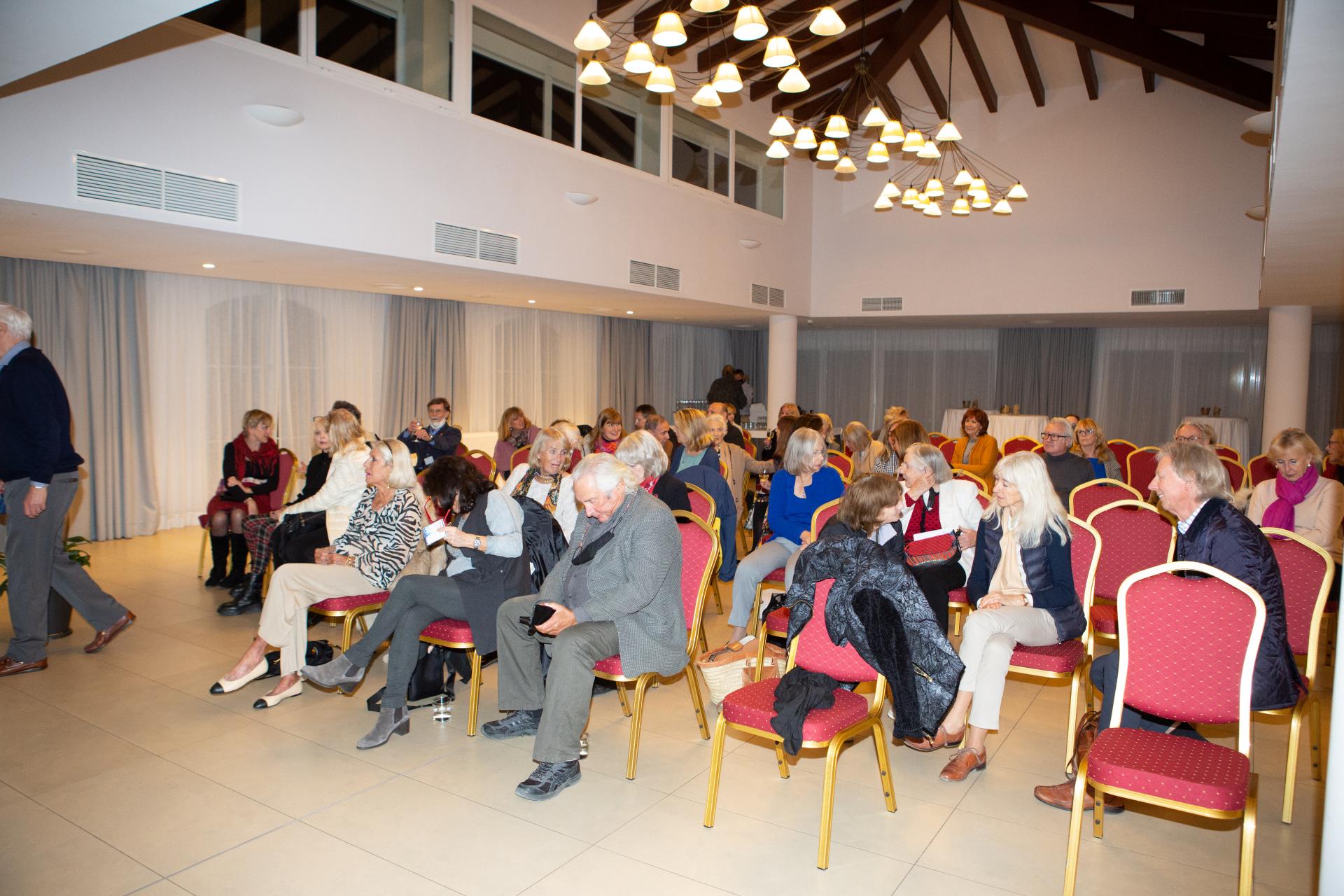 The next talk is due on May 10th and has the excellent title of “Cezanne and Van Gogh - Death as a career move”. Sounds like a fun one! If you are interested to go to the talk, or join the society then visit https://theartssociety.org/mallorca for more info.