Potatoes we could live on them for months

Choice is important because a really good potato dish doesn’t start in the kitchen but at the supermarket or municipal market where we usually shop. | archives

During last month’s lorry drivers’ strike that was threatening to cut Mallorca off from essential food supplies, it was revealed that 85 per cent of what islanders eat arrives by aboard lorries brought by ships from mainland ports. This frightening scenario led to one newspaper headline saying that if those lorries didn’t get here there would only be potatoes and nuts for everyone.

According to the island’s agricultural authorities, Mallorca is self-sufficient only in potatoes and dried fruits. We rely on imports for everything else. The lorry drivers’ strike was sorted out rather quickly and in the Palma shops and supermarkets I frequent I didn’t notice any lack of the foods on my weekly shopping list. But how catastrophic would it have been if we had had to live on nothing but potatoes and almonds or dried apricots, two of the dried fruits for which Mallorca is famous?

Well, it wouldn’t be much of a gastronomic experience but none of us would have died or even become ill if we ate nothing but boiled potatoes in their jackets. The almonds and apricots would have been a rather nice dessert and not absolutely essential to ensure for overall good health. In the recent past, less than 20 years ago, several research scientists ate potatoes and little else and at the end of the experiment they had lost weight and were feeling better than ever before.

One of them ate nothing but potatoes boiled in their jackets and drank only water and at the end of six months a series of tests showed he had no vitamin or mineral deficiencies.
It must have been a long and gastronomically boring experiment for him but at least it was a healthy one.

The main reason for boiling the potatoes in their jackets is that a large percentage of vitamins and minerals are in the skin (or just under it) of most vegetables and fruits.
That’s why doctors and other experts are always telling us to eat fruits with their skins intact and to lightly scrape veggies such as carrots — otherwise we are throwing away a great deal of their nutrients.

When potatoes first arrived in Europe from the New World they weren’t an immediate success with the general public and it took some time before they were popular part of our diet. But eventually they became an essential food in some countries (think of Ireland in the 18th and 19th centuries) and nowadays you even find them in Asian and Indian recipes.
Although some 700 varieties are now held in an official reference collection in Scotland, we don’t have a great deal of choice at supermarket level.

Choice is important because a really good potato dish doesn’t start in the kitchen but at the supermarket or municipal market where we usually shop. One of the potato problems we have in Mallorca is that it is not all that easy to find the right kind of potato for the dish we are planning to make.

Stallholders at the municipal markets can tell us which of their potatoes are suitable for frying or boiling, but that’s about the limit of their knowledge. They are quite unaware of the different varieties available, even their botanical names.

The bags of potatoes at supermarkets have a label with the variety clearly marked, but I have never come across most of these names and know nothing about them. The best solution is to buy them and make a note of their performance —and in future stay away from those that give poor results. A potato’s intrinsic qualities depend on its starch content, which is why waxy and floury specimens should never be in the same batch — which frequently happens at local supermarkets and shops. If a recipe, such as Russian salad, calls for waxy potatoes, it won’t be much of a success if we add some soft floury ones to it.

Potatoes high in starch have a floury texture when boiled and if overcooked they become very soft, often disintegrating into a mush. The waxy potato has a lower starch content and keeps it shape, even when overcooked. The success of most potato dishes starts with making judicious use of these two basic facts. Rule number one when cooking with potatoes is obvious: choose the variety most suited to the dish you are making.

Waxy potatoes with pale yellow flesh are ideal for boiling and for salads. They are also good for frying, either in thin rounds or as chips. When these potatoes are sliced and used for a salad they don’t break up, and when french fried or sautéed they don’t fall apart.
There’s another reason for using waxy potatoes in which oil or butter is involved: they absorb less of it. Floury potatoes soak up a lot of fat.

Potatoes with plenty of starch are best when baked, puréed, mashed or used in soufflé dishes. The floury texture of some varieties makes them ideal for baking in their jackets, but to get the full benefit of their high starch content they should be extra large.
One of the problems about buying potatoes in Mallorca is that the choice if very limited. I see about a dozen varieties on offer (although never in the same shop or supermarket) but most of them I have never heard of — and they aren’t all that good. 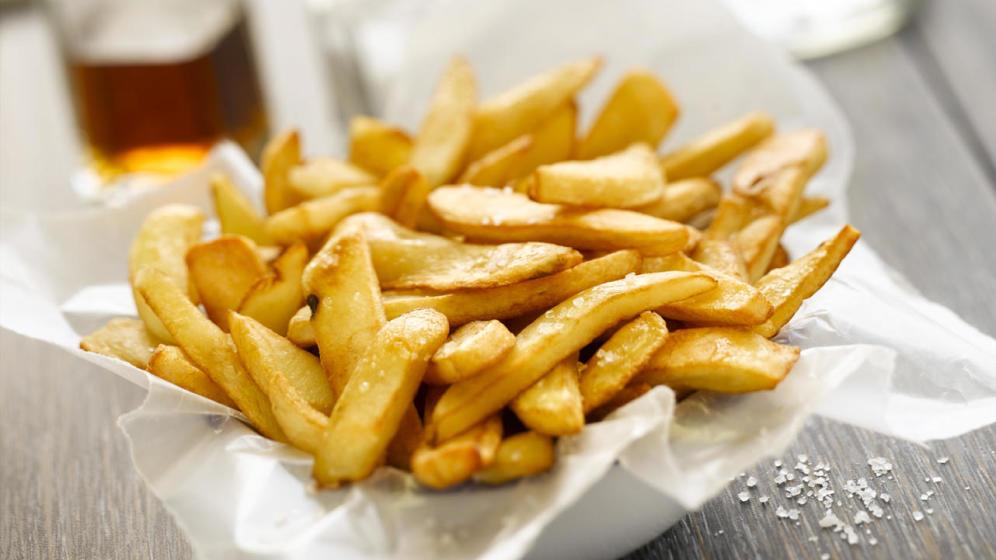 The Belgians, who adore potatoes and make the most delicious french fries with them, have a choice of more than 30 varieties if they shop around. And they are nicely graded so the Belgian housewife is never sold a batch with waxy and floury potatoes in the same bag.

My favourite variety here is the kennebec, an American variety sold under the name of Patata de Galicia. I only ever see it at El Corte Inglés. It is cultivated under strict quality controls and has a definite season that always seems to be much too short.
The kennebec is versatile and can be successfully boiled, fried, roasted, baked or mashed. I find it especially good for french fries.

When frying chipped kennebecs at 160C they go rather soft and have to be handled with care. But when given their final dip in oil at 190C, they develop lovely crisp exteriors.
Kennebecs are also ideal for making a traditional Spanish tortilla. The thinly sliced potatoes, preferably done on a mandolin, become nicely soft and keep their shape. Even if you aren’t using onions, the kennebecs on their own will produce a tortilla that is nice and moist. 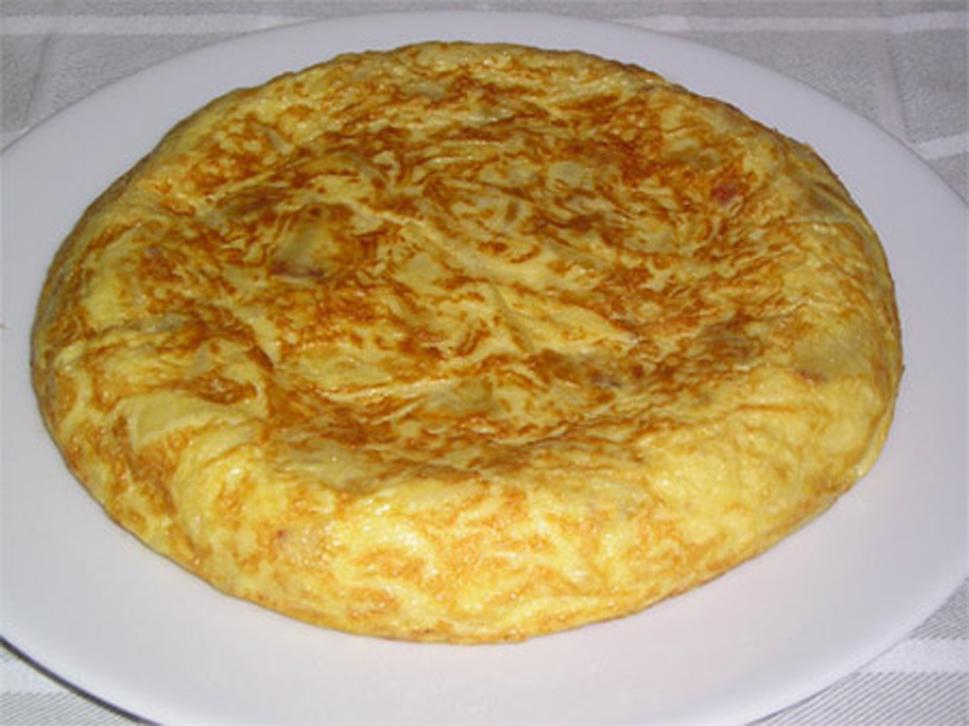 When potato plants were first brought back from the New World, they were taken to Galicia where the climate seemed to be ideal for them. The potatoes settled in nicely and Galicians became very fond of them. Galicians use them in dishes of all kinds, even some that aren’t associated with potatoes. They prefer their potatoes boiled in their jackets, peeled, and sliced thickly. But for some dishes they are peeled raw, thickly sliced and then cooked with the main ingredient. Galicians call potatoes ‘cachelos’, a word you’ll see on the menus of Galician restaurants, and they seldom eat them plain boiled. The potato slices are at least dusted with sweet or hot paprika and generously drizzled with olive oil. If they are being served with pan-fried fish or meat, the pan juices are spooned over the potatoes.

In a Galician restaurant I was once served a simple but most effective dish in which little medallions of fillet steak were sautéed in plenty of olive oil over a high heat and served with sliced boiled potatoes well anointed with the pan juices. Sprinkled with freshly milled black pepper, it’s bistro-like fare that is easily and quickly done at home. It has visual impact and impresses everyone with its simplicity and scrummy taste.

Kennebecs can also be thinly sliced on a mandolin and turned into a French style galette such as ‘pommes de terre Anna’. Put the sliced potatoes into a thick frying pan with a good amount of olive oil, turn them over to get well lubricated with the oil, then spread them out and flatten the surface. Cover the pan with a lid or plate and sauté the potato slices over a gentle heat for about 15 minutes or until the underside is golden and crisp. Use a metal spatula to loosen the potatoes round the edges, then turn and do the other side, but without covering the pan so that the crisp top doesn’t go soft. After another 10 minutes or so, slip the galette on to a serving plate and cut into wedges.