The species name commemorates Eleanor of Aborea (1347 - 1404), a judge from Sardinia, whose ‘Carta de Logu’ (Body of Laws), was published in 1395. What made this law so special was that it legalised the protection of nesting falcons. Thankfully even back then, Eleanor obviously loved seeing the falcons and sought to protect them. On Mallorca, the Eleanora’s Falcon has returned to us from its wintering grounds in Madagascar. The wetlands reserve of La Gola (Puerto Pollensa) reported a sighting last week of this amazing falcon. The genus name falco is from the Latin ‘falx’, a sickle, referring to the claws of the bird.

Falcon species on Mallorca include the resident Peregrine and Kestrel, with the Lesser Kestrel being a migrant in April and early May, the Merlin a winter visitor, the Hobby a migrant in low numbers, and even a sighting of the rare Lanner Falcon (one at Salabrar de Campos), reported by Michael Montier and the only known record for the island. Red-footed Falcons also pass through in late spring, so falcon wise, Mallorca offers a tempting variety. 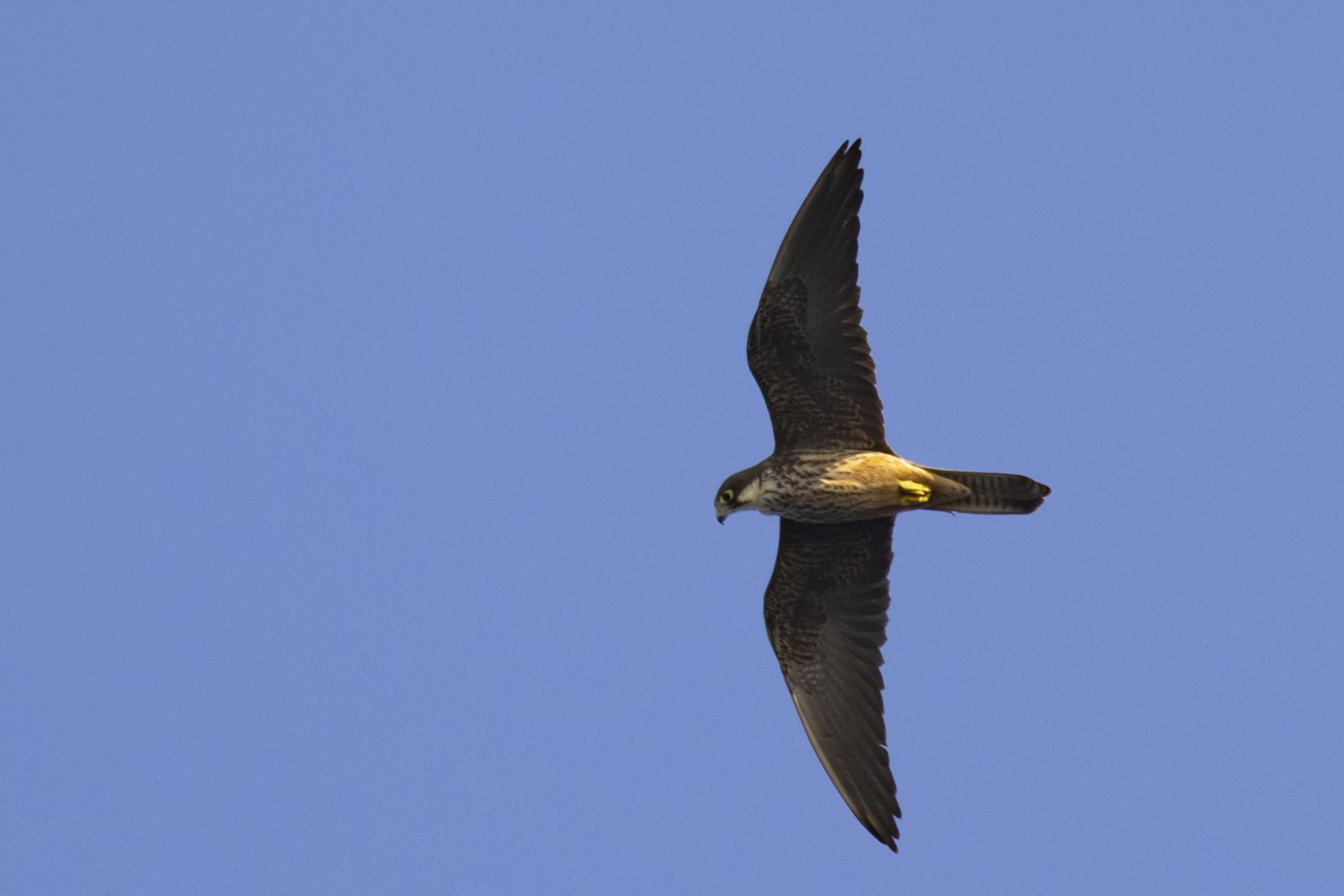 But this week, I would like to focus on the Eleanora’s Falcon (Falco eleonorae). The migration route is very interesting, and through research, it has recently been discovered (with the use of satellite telemetry), to be inland through the African continent, originally thought to be only coastal, with birds from the western end of the Mediterranean flying to Suez, before flying south down the Red Sea and across the Horn of Africa. However, the recently tracked birds by both Spanish and German researchers, have shown an inland route through the Sahara Desert and the equatorial rainforests, until they reach Kenya and Mozambique. By the time they reach Mallorca, they will have clocked up 5,600 miles (that’s for a single trip by the way). Amazing.

They are skilful hunters, and will take large insects such as dragonflies, which are transferred from the talons to the beak, all during flight. There are some records of them catching small birds too, and removing their flight feathers some days later, then feeding them to the young, something unique among bird species. In the evening over the marshes, I have seen several attempting to single out birds amongst the House and Crag Martins whilst they are aerial feeding. With twenty-five species of Bat on Mallorca, they can also fall prey to an Eleanora’s. Daytime over the marshes can be good places to watch Eleanora’s feeding, sometimes in numbers around a dozen at a time. I have watched them in groups, hawking for dragonflies over the Albufereta Marsh in particular, also at the Albufera and Tucan Marshes and at the salt pans in the south. Because they are a specialist hunter of migrating birds, they have a delayed breeding season which is in late summer, and small migrants entering the island can be easy targets as they are tired. Cap de Formentor and into Cases Velles in the north, is one of the places that migrating birds first reach Mallorca, so it is no surprise therefore to see Eleanora’s breeding along the cliffs at the Cap. However, the resident Peregrine Falcon is always on hand to remind them that this is its territory too, and some aerial mobbing occurs from time to time. Birds are captured in flight, and the Eleanora’s likes to cruise along the coastal cliffs with steady wingbeats, watching for tired migrants. A study in Mogador Island (Morocco), showed that Eleanora’s imprisoned live prey in rock crevices for later consumption. 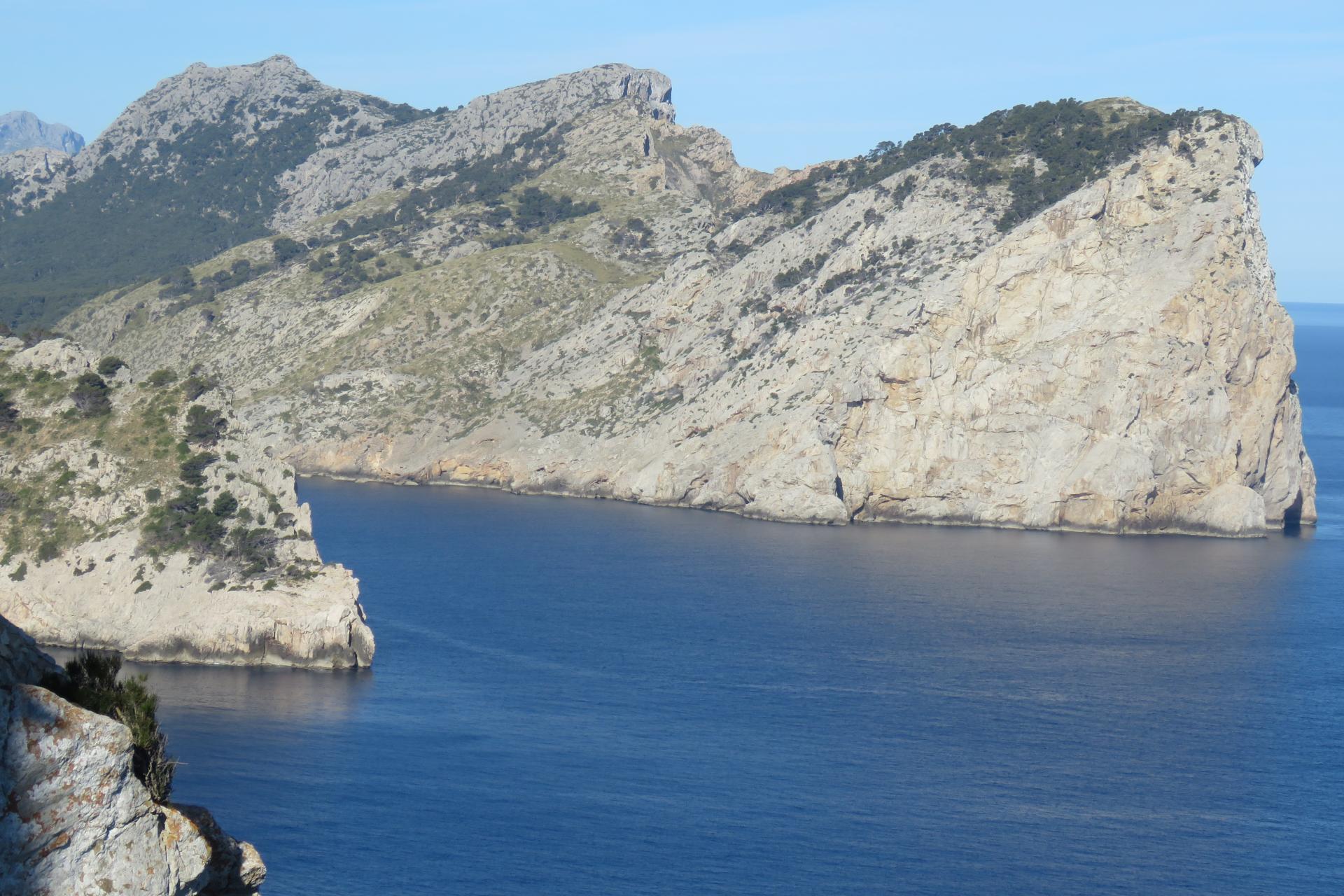 The voice is a hoarse Kestrel-like ‘chatter’ but not often heard, unlike the Peregrine. The length is 36 - 42cm, with a wingspan of 90 - 105cm and a weight of 350 - 400g. The nest is on a cliff ledge under a overhang, in a rock crevice or under a bush growing on the cliff face - no nesting material is used. 2 -3 white, or pale-buff eggs are laid with brownish markings. In flight they appear slender and dainty, and is larger than the Hobby. The tail is longer on other small falcons. The wings are long and slender, giving an angular outline in flight (a good identification feature). Both pale and dark forms occur, with the pale form being around three times more numerous than the dark form. A dark-phase bird looks almost black in flight. Pale phase birds show a pale cheek, dark moustachial stripe, and a dark, streaked underside. The underwings show contrasting dark coverts and pale primaries in both phases.

Eleanora’s Falcons are elegant fliers, light and acrobatic, they are superbly adapted for intercepting Swallows, House and Crag Martins, Pallid and Common Swifts, small migrants and even Bats. I have seen one hawking for dragonflies over the Albufereta Marsh, suddenly increase its speed to pursue a passing Crag Martin. Luckily on this occasion, the martin was able to avoid being caught. It has been estimated, that 1 in every 600 birds crossing the Mediterranean may be attacked by these beautiful, skilful, hunters.