'I've come to love where we live, it feels like Tuscany'

It’s a fact that Mallorca has become a cosmopolitan destination for many, but there are still many pockets of the island which remain untouched, Algaida being one.

I went to visit local artist Sylvia Baker de Perkal and her husband Adam, at their country house on the outskirts of this town where they have lived since 1995. As I arrive I am greeted at the gate by some enthusiastic hounds, one of which has orange and gold paint on his head, a hint of what life is like in this comfortable and welcoming home, and I am led through to a shady grove in the garden where Sylvia, Adam and I drink tea and chat.

The couple first bought their house as a bolt hole from their jobs in finance related industries in Madrid in the 90s, but they soon came to realise that they wanted to escape the “golden cage” as Adam put it before they started a family. “We watched everybody get married, have children and then have to return to work,” Sylvia chimes in, “It didn’t feel like a fulfilling life to us. The 90s were a very materialistic time, and although there was financial security, we both felt unchallenged.”

Once they had moved to Mallorca, Adam worked first for a distillery before setting up his own wine importation business, mundidrinks.com bringing wine from all over the world to the top class restaurants on the island and across the mainland. 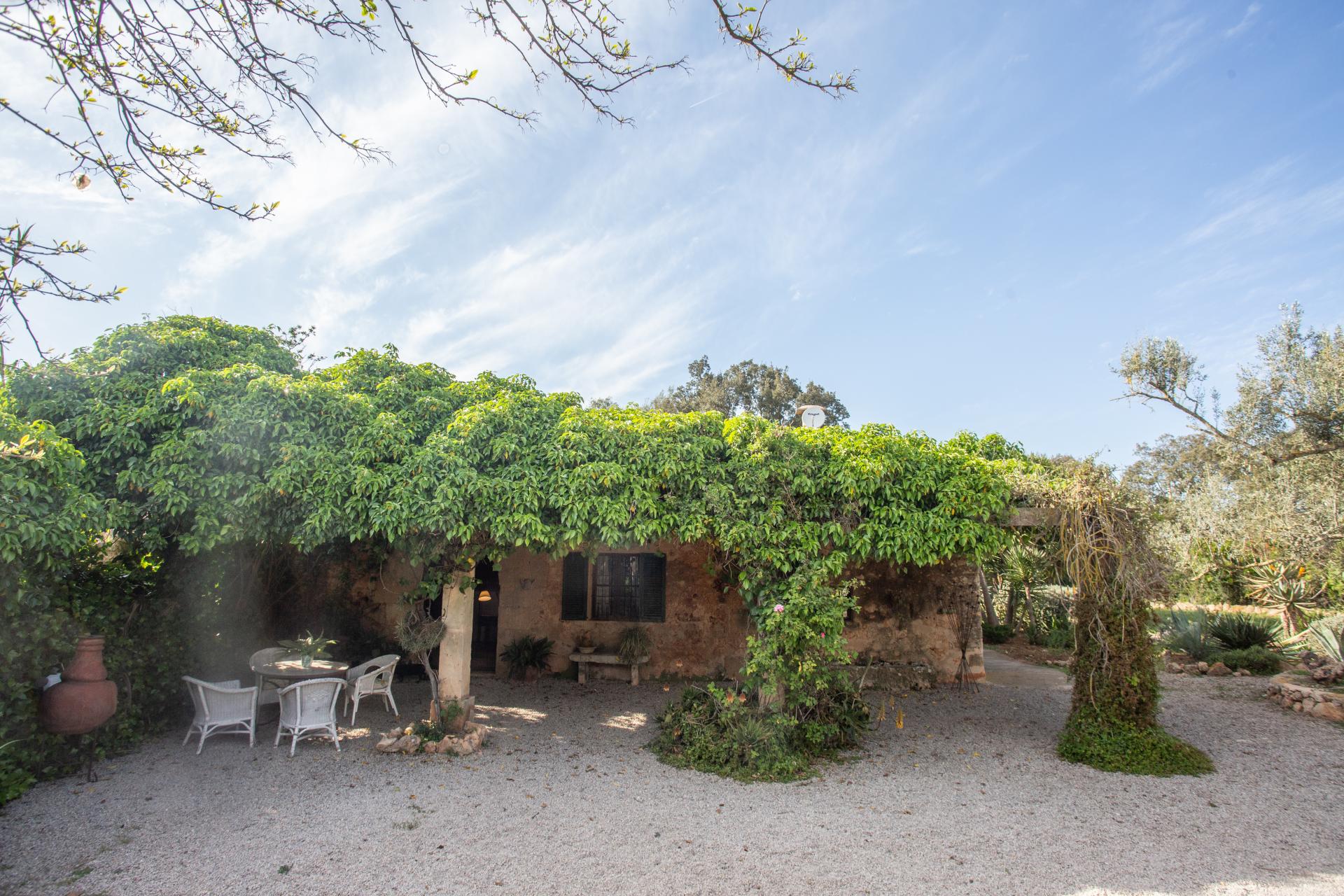 Initially Adam wanted to live in the Tramuntana, “I think I wanted the views, but I’ve come to love where we live, it feels like Tuscany. The landscape is continually changing, it is much greener than the rest of the island, and it surprises a lot of people when they see that it is also quite hilly, despite being called “Es Plau” (The Plain)”. He tells me about various routes around the area, from Montuiri to Randa to Santa Eugenia, it all sounds beautiful with plenty of almond, cypress and fig trees to break up the rolling hills and add richness and depth to the scenes.

It is her walks in this immediate countryside which inspire many of Sylvia’s paintings and as she shows me around their old stone house you can see that in her work which hangs on the walls.

Sylvia, a professional translator for the past 25 years, began painting seriously relatively recently in 2020 after dabbling on and off, and has enjoyed great success with her art being sold worldwide to private collectors and hotels. “I went to an art workshop with my friend Justine and the artists leading the event took one look at my work and said, “oh, you are already an artist”. Well that did it for me. It lit the spark.”

Step by step Sylvia has grown in confidence, her first painting, a bull, sold within a week of being put on sale, and recently her artwork reached a pretty penny for a charity auction for the JoyRon Foundation.

You can see Sylvia’s work at sylviabakerdeperkal.com

It’s great to see that she is still delighting in the realisation of her latent talent, “When I paint, I feel like a child again” she tells me, her eyes shining with happiness. She is lucky enough to have a studio space in her garden which she shows me, it is pleasingly full of half-squeezed tubes of acrylic paint, and scraps of handmade decorative papers that she uses as collage in many of her works. When she is in her studio and in the “zone” she can be there for hours, “I completely forget what time it is, and when I am finished I am exhausted!”

The Baker de Perkal’s house is an expression of their lives together, in every corner there is something unique that reminds them of a moment in time in their marriage. There are pieces from Jakarta, hundreds of books and vintage furniture abound. Their bathroom has recently been remodelled, “I wanted to do it in the country French style, and Justine helped me source everything as she is an interior designer.”

Sylvia insists that I sit down on the toilet and stare at the terracotta tiles on the floor, “Do you see him?” She asks me with a smile on her face, I stare at the tile in question and then an image of George Michael starts to form like a vision. “Yes!” I say, because if you squint a little bit, he could be there on the floor in the pattern, if you have the eye of an artist at least. Outside in the garden they show me a huge yucca tree which started out as a pot plant on their balcony so long ago in Madrid. “She has made many babies!” Sylvia says happily, in fact look around and you will see creation, imagination and joy everywhere in their cosy home.