Seventy-five years ago - August 16, 1947 - a show was put on in Mallorca of a type never previously witnessed...

At the La Beata fiestas in Santa Margalida, a tribute to a famous son of the 'Vila' (as Santa Margalida often refers to itself) will be inaugurated on August 31. This is a tribute to Miquel Estelrich, better known by the name he took from his trio - Mestelrich. Never heard of him? That's understandable, as his fame was attained several decades ago. But fame there was, and it went all around the world.

On that day in 1947, the arena at the bullring in Palma was packed, and what the spectators saw was an act of daring some twenty metres above the hard but sandy surface of the bullring. Without the aid of a safety net, with no protection on their bodies, they completed the 'Ride of Death'. Miguel was on a bicycle; Rafel and Sebastià were trapeze artists, attached to the wheels of the bike.

Miquel had tried his hand at bullfighting but he wasn't much good. Having failed at this, he performed other acts at the bullring in Palma, where he was a sideshow for the main event. One involved him sitting on a bike motionless while a bull was allowed to roam around the arena. The theory was that a bull wouldn't charge a motionless man (on a bike). As luck would have it, Miquel's theory was correct.

Less successful was his scheme to become the first bullfighter on a bike. It ended in total disaster. Miquel wasn't hurt, but the bike took a battering when the bull charged and sent Miquel and the bike some distance into the air. Despite this failure, the businessman who ran the bullring was impressed by the young man's courage, and Miquel persuaded this businessman, Eduardo Pagés, that it would be a good idea to develop the high-wire cycling act. 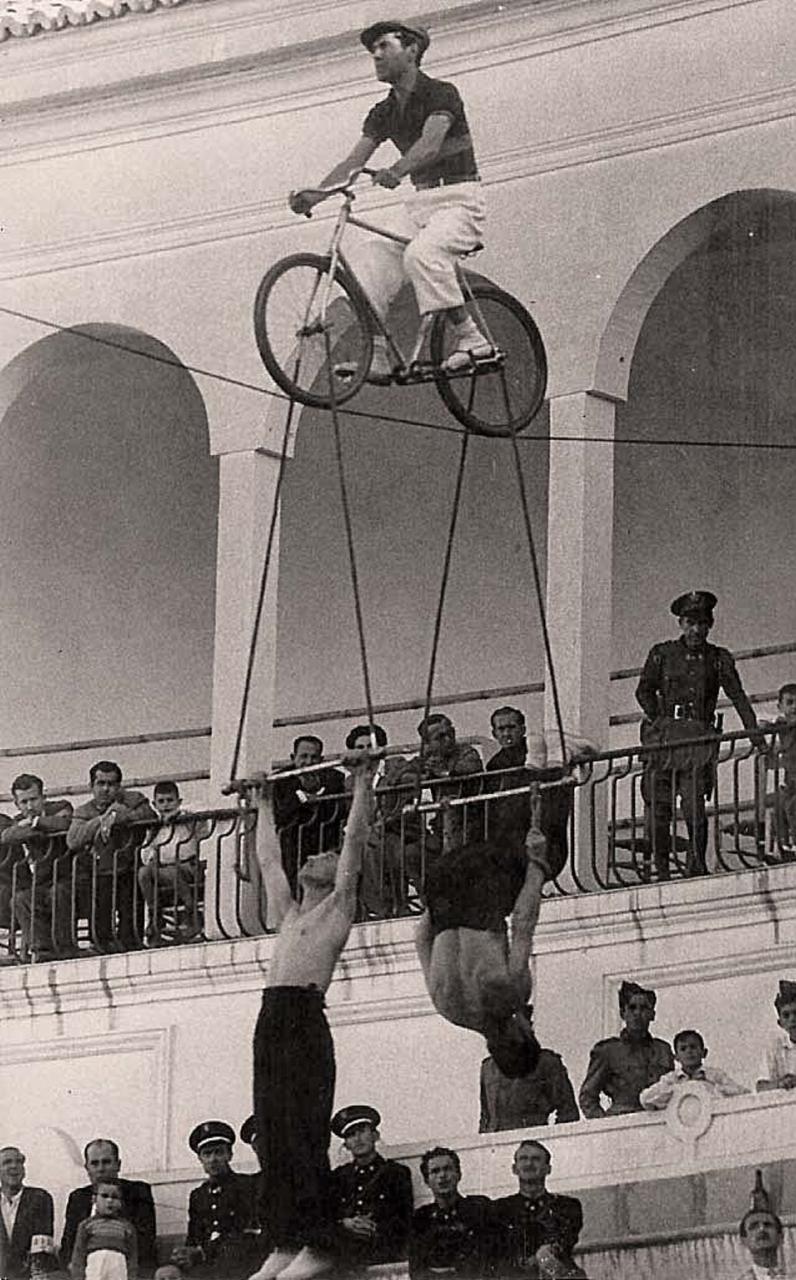 With the aid of an aviation mechanic, Miquel came up with the design for the bike, the trapezes and the wire. He patented his system, though he wasn't the first to have taken to the high wire on a bike; the Great Wallendas had been doing their act for quite some years previously. But it was new for Mallorca, and being new it required getting an initially reluctant town hall to agree to it. The day came, the wire was strung between two towers at the bullring, Miquel's patented contraption was put to work and in front of an amazed audience the act was a fantastic success.

So successful was it that another bullfighting impresario, Rafael Dutrús, contracted The Mestelrich Trio to repeat the feat at other bullrings in Spain. As the shouts of bravo reached their crescendo in the bullrings of the country, Dutrús had further ambitions. And so did Miquel. Fame came swiftly, and international interest followed just as quickly. It is said that the trio performed in over 50 countries. One of them was the UK, but it was in England where tragedy very nearly struck.

The story goes that the BBC, who were to film the feat of daring, insisted that the act was performed more slowly than usual. This was because camera work wasn't that sophisticated back then. It is thought that this might have been the reason for what followed, but legend has it that Rafel, going against the advice of Miquel and Sebastià, had eaten before they went up on the wire.

The Pathé newsreel report of The Mestelrich Trio in Battersea Park in 1952 said that the spectators might have suspected that there was some trick. The report went on to state that there clearly was no trick. Rafel, apparently suffering from indigestion, fell. He would have been killed, had he not landed on an attendant. Rafel was in a coma for some time, and when he recovered, he returned to Mallorca and to a less risky career with the post office.

A new line-up headed off to the US, where further disaster was to strike during what was now also a unicycling act. A new trapeze artist, Gabriel Perelló, fell into the sea at Atlantic City. But Miquel most certainly wasn't finished. In fact, he went on to attain even greater international fame for his 'smallest bicycle in the world' act. Sixteen centimetres long and with eight centimetre diameter wheels, no one else could even get on this bike, let alone ride it. King Faisal of Saudi Arabia once bet Miquel that he could; Miquel won the bet.

He retired in 1968 when he was 55 and died in Palma in 1982. His story was told in a 2006 book and is now being revived again. But it is a story that isn't as well known as it should be, for Mestelrich was Mallorca's greatest ever showman.