“I love nothing more than trawling through scrap yards; it de-stresses me ...”

Daniel Brunner with some of his works of art and busy at work welding in his yard full of junk in Llucmajor. | Daniel Brunner

Daniel Brunner loves nothing more than working in the heat. Welding away in the current heatwave did not phase him at all. In fact, he says that he feels very much at home in Mallorca, it reminds him of how his home country of South Africa was forty years ago. 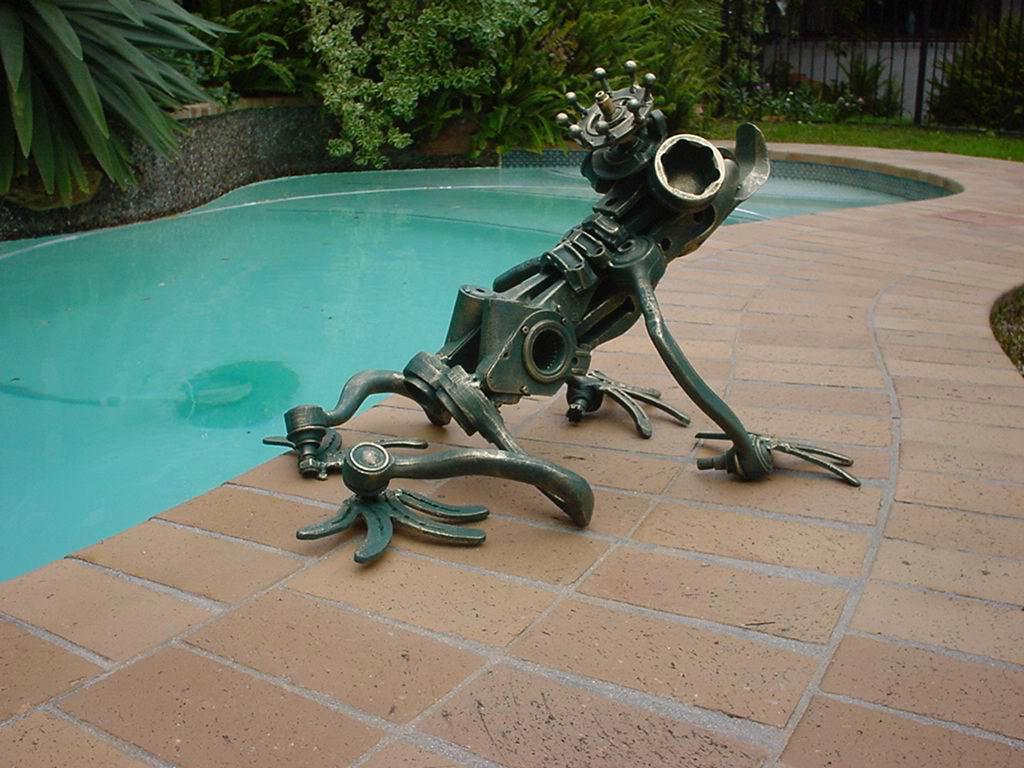 Daniel is a unique artist, working on putting together a collection of sculptures in order to hold his first exhibition on the island.
Originally born in Austria, his father is Austrian and his mother Peruvian, the family moved to Cape Town when he was nine and that is where he grew up until he joined the army for a brief spell and then travelled the world. He started off in Costa Rica and worked as a casino dealer, a builder and a gardener.

“To be honest I didn’t know what to do with my life. I had a few ups and downs along the way, spent some time in the UK and in 1999 decided to return to South Africa, and that is when I learnt how to weld,” he said. 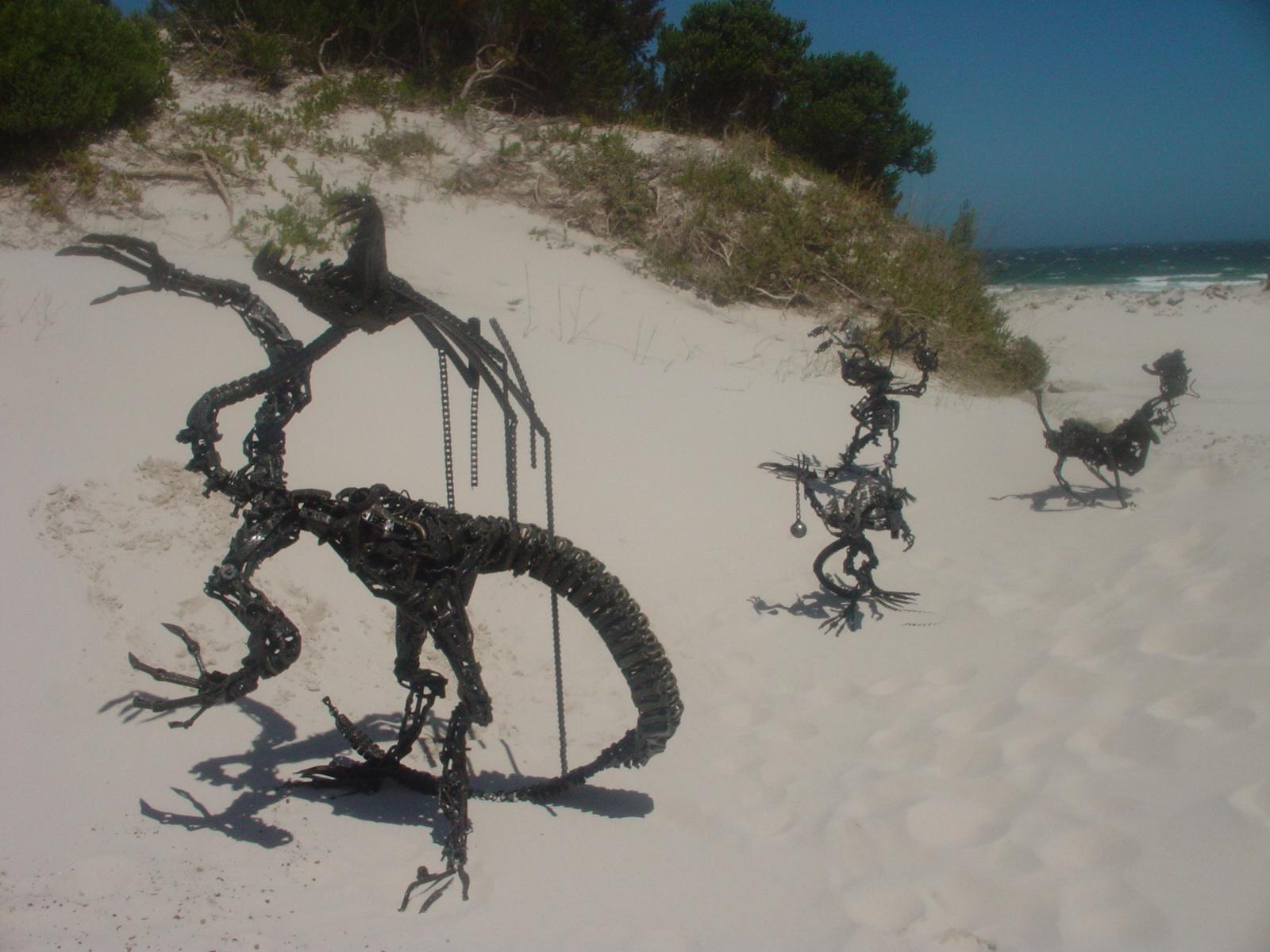 Daniel did in fact go to art school, but at the time he did not consider himself an artist. He had decided to study art as an easy option, he says he was too lazy to do anything else - but after three years he got kicked out.

Chasing his dream, reaching for the scraps to achieve his goal, Daniel truly creates metal magic from metal waste, destined to be recycled.
Every creation is as individual as the artist himself.
No plans, sketches or pre-thought, as that limits the free flow.
It just comes to life as it is being created. 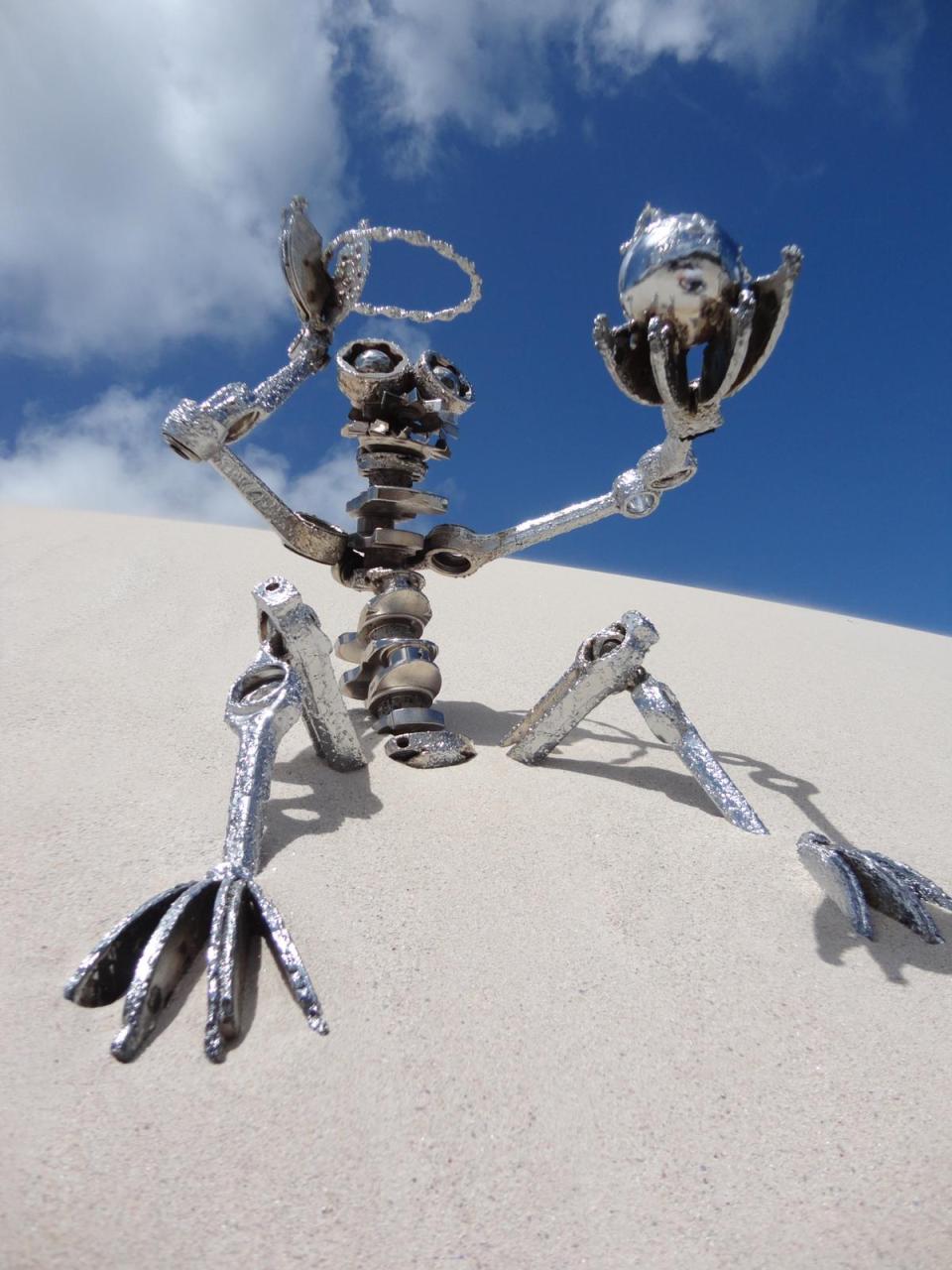 Having begun with a second-hand junkyard selling any and everything he could get his hands on, the discarded car parts appealed to him as they seemed to have very curvaceously organic shapes. He asked a friend to teach him the welding game and within five minutes was gluing together the parts.
The start was simple and more animated, also sprayed and coated, then it went into more futuristic sci-fi type dinosaurs and terminators.
The latest is wildlife, some blended with wood and some without.

“In South Africa my work was well received, especially with the British, Germans and the Dutch. The international market and I had a number of exhibitions.
“But the trouble is that many of them are large pieces of work, so people need space for my sculptures, although I have been working on slightly smaller pieces more recently,” he says.
Daniel, who speaks fluent Spanish, German, Afrikaans and English, arrived in Mallorca just over a year ago. 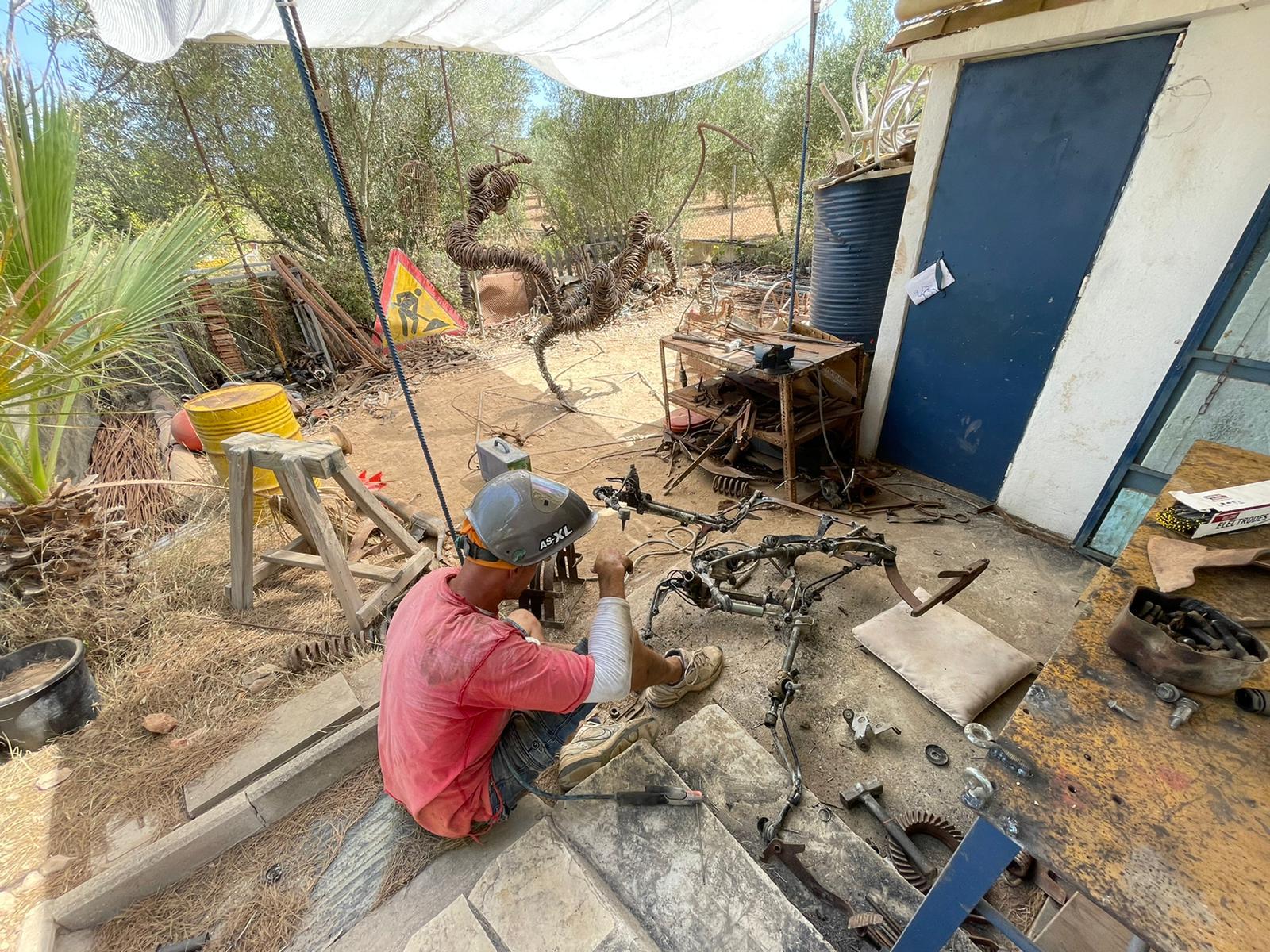 “My brother came about four years ago, then my parents and now me, and I don’t think it will be too long before my sister joins us on the island.

“We all love it here and we’re a long way from all the political issues and crime in South Africa.
“And since I arrived, I’ve never stopped working on my sculptures. But the demographics are different in Mallorca. People don’t tend to throw away small bits and pieces, they tend to dump the whole thing if a part stops working or they get bored of it. So I’m trawling the dumps and waste sites and collecting some quite large pieces of waste metal. But it’s not a major problem, I love trawling through scrap yards I find it de-stresses me and I love nothing better than finding a piece of rusting metal which is screaming out to be given some life,” Daniel explained.

“Back in South Africa all the waste metal would be taken to pieces, but I guess here it’s too labour intensive and costly, so people just dump the whole thing,” he added.
“It’s a different way or approach to life and material objects.
“And I guess that by recycling material to create my sculptures I am contributing to the eco system and also demonstrating what can be done with other people’s junk. So far I have five completed pieces and I aim to get a collection of ten together in order to hold my first exhibition. That’s going to be a challenge, finding a gallery or someone who would like to take me on because, apart from being very unusual, like I said, most of the pieces are rather large. But I’ve got plenty of friends willing to help, so we’ll see what happens eventually. 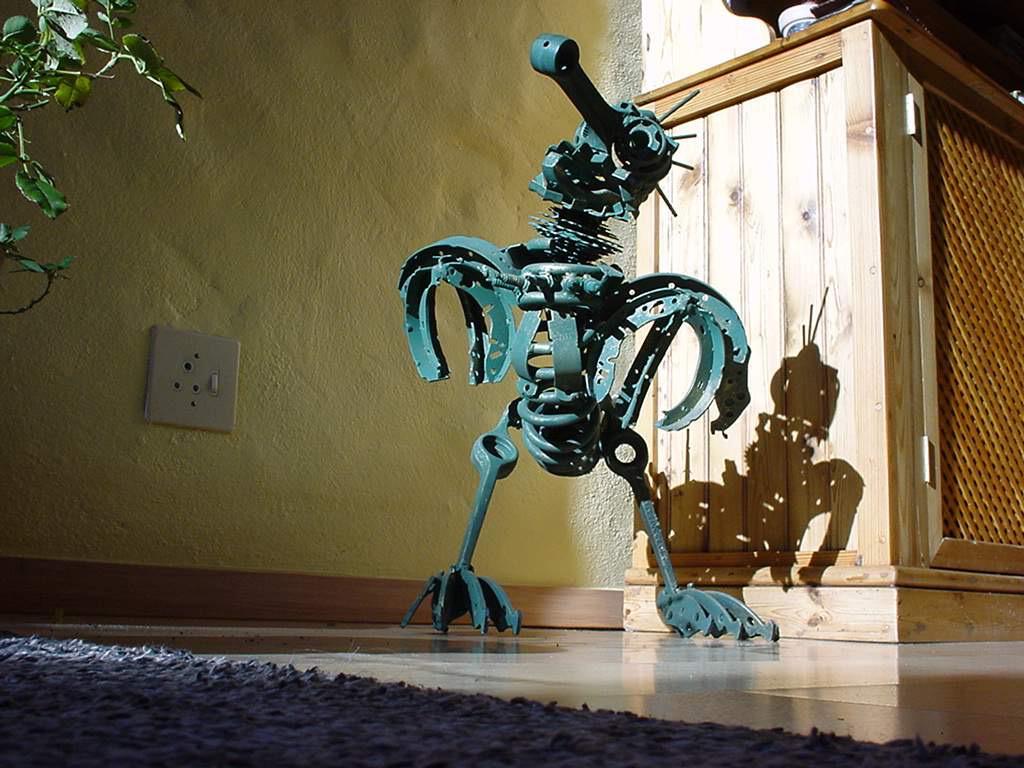 “I guess my main inspiration is my wife because she gives me the freedom I need and, to be honest, I weld and sculpt what comes to mind when I see a piece of scrap metal.
“It could lend itself to becoming a lizard or a frog. I never really know when I start and just go with the flow, my feelings and emotions. It’s very spontaneous, I just switch off, switch on the welder and get to work.

“Much of my early work was rather dark, probably because I had issues with depression and I think that was transmitted in my art work. But here in Mallorca I feel much calmer, although while I love the heat, I hate the cold winter; luckily it doesn’t last for long, but I don’t like the cold.
“But that aside, if my work does have a symbolic meaning, as a Christian, it is to question life and the after life, albeit good or evil.

“The message in my more current work is that there is life after death, whether it be a good or bad place and to make the most of and enjoy this life because it is relatively short. I think it is extremely important to live life to the full and to know what you are doing. 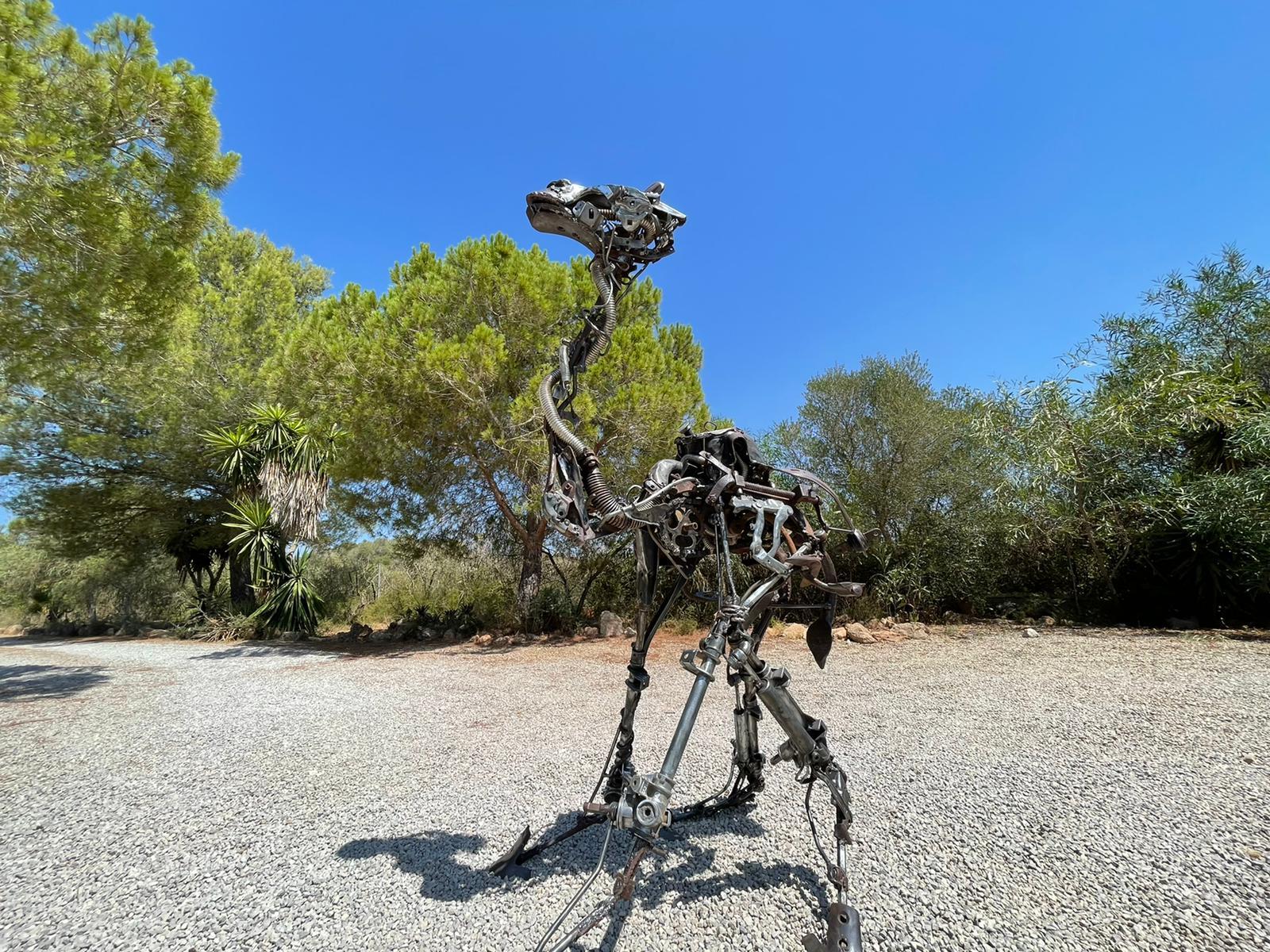 “I spent so much time in limbo, not really knowing what I was doing or what I wanted to do and that can be very frustrating and all that made me realise how important making the most of life is. And that is the message I try and transcend through my work,” explained Daniel, who has been hailed as the “heavy metal magic man” by the media in South Africa.

“Don’t let people intimidate you because your idea is different or even controversial. Go ahead, jump in, is what I say,” he added. “Everyone should be given a free reign to creativity and as far as I am concerned, the more rubbish I have in my yard, the more freedom I have to work,” said Daniel, who lives and works in Llucmajor.

“I do come from an artistic family, some are keen painters, but until I learnt how to weld, I had never seriously really tried my hand at art.
“I can remember as a little boy wanting to build insects that fight and make war, but I never knew what materials to use or how the mechanics of something like that would work, but having finally taught myself, I have my own ideas and I have finally made numerous insects and other animals and creatures,” he said.

Hmm, takes something really special to get kicked out of art school. I know. I Like some of these pieces and the recycling but some expo news or Instagram link would be good.