Robbie Williams will be visiting Europe next year with his 'XXV' tour, with which he will celebrate his incredible 25 years of great success as a solo artist.

A new tour in which Robbie Williams will once again surprise audiences with a show full of energy, kicking off in Bologna, Italy, on January 20. He will be performing in Barcelona as part of this new tour on Friday March 24 at the Palau Sant Jordi, as well as visiting cities across the continent, including Paris, Amsterdam and Berlin, among others.

This new major arena tour will be a live celebration of Robbie's 25th year as a solo artist, and follows the release earlier this month of his album, XXV. The album features many of his greatest hits and fan favourites from his 25-year career. To talk about Robbie Williams is to talk about a whole generation that grew up with his music as a soundtrack. Let Me Entertain You', 'Feel', 'No Regrets', 'Rock DJ' and 'Angels' are just some of the songs that Robbie Williams, accompanied by a powerful electric band, will relive live at each of his concerts. 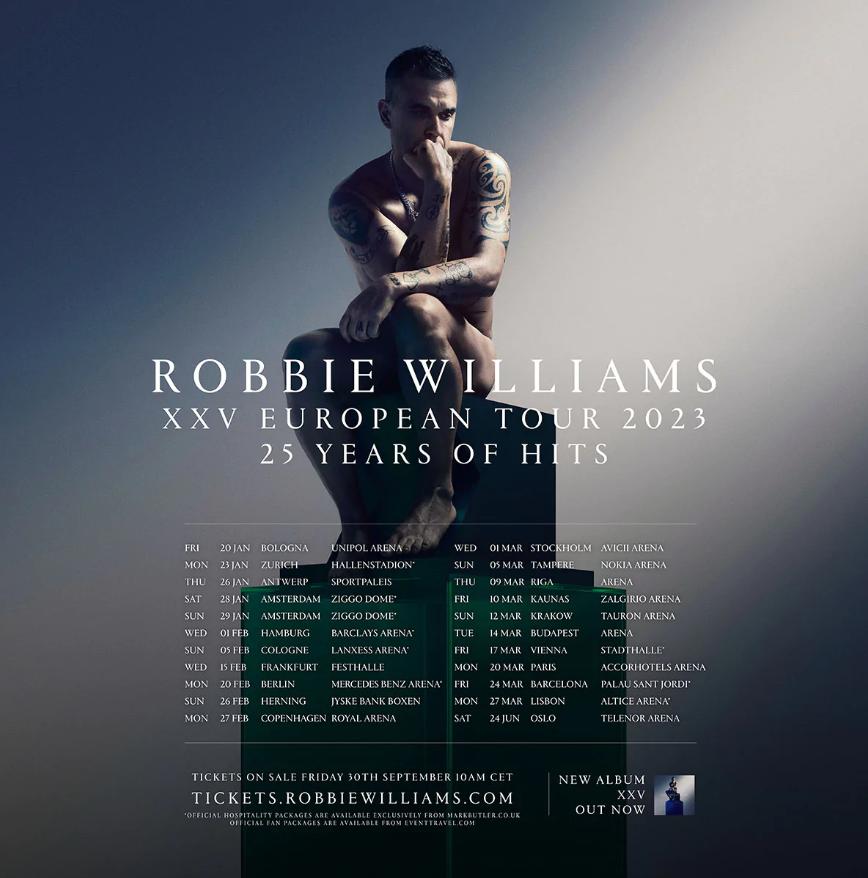 The tour will be on pre-sale through Robbie Williams' official website, robbiewilliams.com, from Wednesday September 28 at 10am.

In early September, Robbie Williams achieved his 14th UK number 1 album with XXV, which topped the charts in its first week of release. With this incredible achievement, the music icon has broken the record for the most number 1 albums in the UK by a solo artist. In 2019, he equalled Elvis Presley's record in the charts, when he achieved his 13th number 1 album with The Christmas Present. Only The Beatles surpass that figure, with 15 #1 albums. In total, throughout his solo career and with Take That, Robbie Williams has 19 #1 albums, making him one of only two artists with the most #1s of all time, second only to Paul McCartney.