New Heights of Entertainment: The Climb of the Pine

The ‘Pujada del Pi’ simply translates as the ‘climb of the pine’, and is an annual event held in Pollensa

As a boisterous youth, I once climbed up the side of our local church. The ascension was far from a spiritual calling or any kind of epiphany. The church in question was uber-modernistic, showcasing a massive cross, highlighted in brick relief on one of its exterior walls. I suppose in retrospect, this was the first climbing wall of its kind, yet obviously not the intention of the post-modern architect behind the initial contemporary concept.

As a hyperactive teen, the sculptured wall was like a red rag to a bull. Once the scaffolding was down I was up that cross like a rat up a drainpipe.

And I wasn’t the only one, tempted by this parochial challenge. The church stood next to a bus stop, so whilst queueing for daily transport to school, a group of like-minded adventurous souls, fuelled with the same spirit of adventure along with the opportunity of showing off, would aspire to dizzier heights of fame.

None of the other daredevils actually managed more than three or four metres before nerves kicked in. I on the other hand, had been blessed with an obviously smaller brain and was determined to break all records and scale the said wall to the very limit. Which I did. With absolutely no thought or regard whatsoever as to what I would do once I got up there. Or how I would ever get down!

Yes, I was admittedly young and very foolish. But luckily someone called the fire-brigade. They also called my Mother! I don’t know which was worse: being stuck up Our Lady of St Margaret’s or facing the wrath of a bristling Mumsie. ‘Just wait ‘til you get down here,” she hollered in a voice swollen with anger and concern as the fireman plucked me from the top of the cross like a ripe plum.

“I could always leave you up here!” winked my uniformed saviour, but I knew my descent was imminent, along with the deserved clip round the ear, which naturally followed. But there were also cheers and a blurred photo of me in the local rag with the headline: SCHOOLBOY SEEKS SHORTCUT TO HEAVEN. How cool was that! But I was far from being hailed a hero.

How different though, would that scenario have been, had it happened here in Mallorca during the run up to the annual ‘pino’ fiesta in Pollensa, due to take place on January 17. No doubt, I would have been snapped up by an appreciative and willing sponsor. 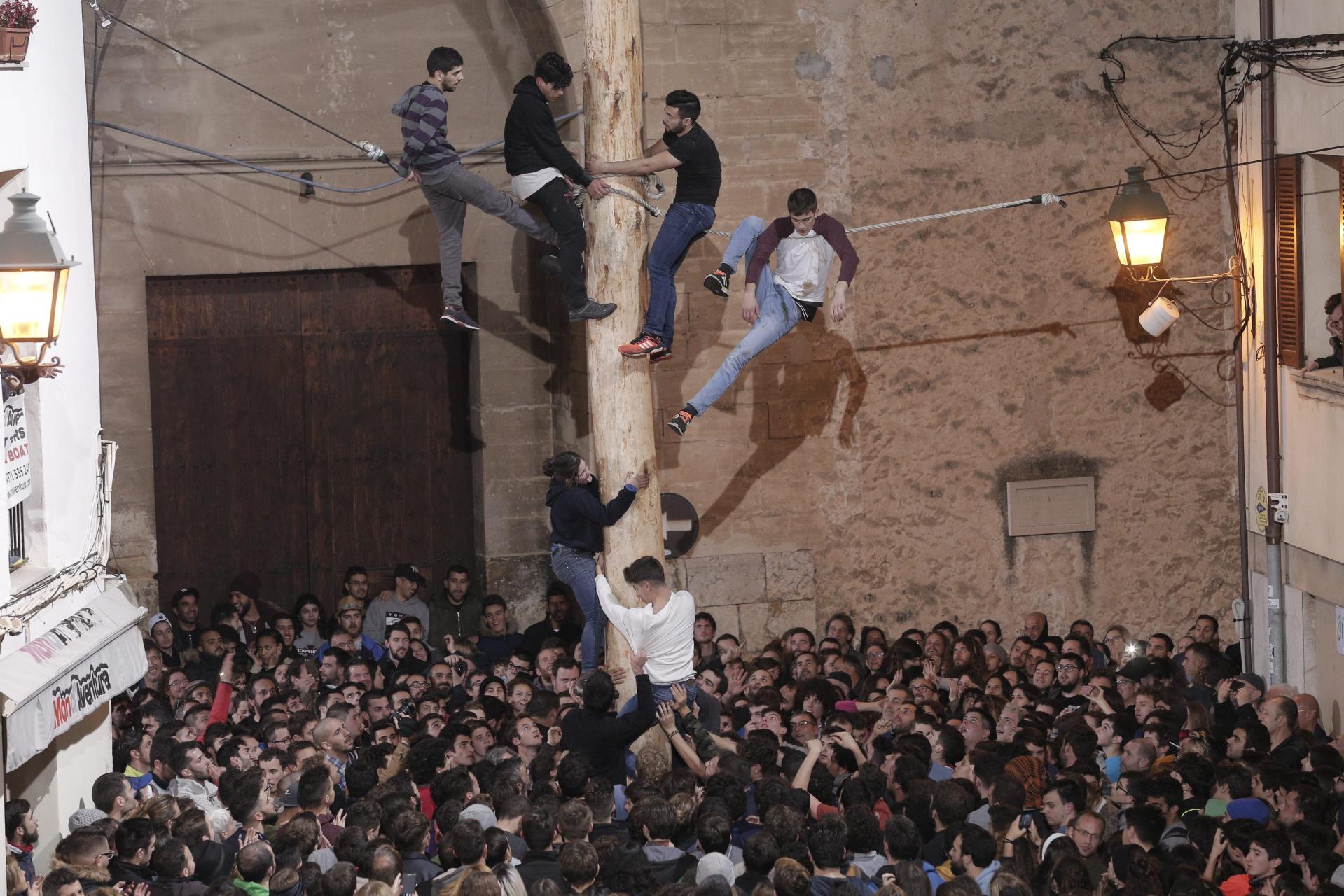 For those who haven’t yet been initiated, the ‘pino’ fiesta or ‘Pujada del Pi’ simply translates as the ‘climb of the pine’, and is an annual event held in Pollensa, which takes place as part of the warm-up to the main Sant Antoni celebrations.

Each year, a 20m pine tree is ceremoniously felled in the forest of Ternelles, stripped of its branches and bark, then carried majestically and often clumsily, down the mountain pathway and through the narrow streets of Pollença by strapping young men, full of enthusiasm and usually a little worse for drink. It’s quite a spectacle that takes all day to complete, and requires lots of party cheer to fuel the pine’s eventual arrival at Plaça Vella, the old square nestling in the shadows of Pollensa's impressive church.

The naked, silky smooth pine is then covered with a thick layer of soap before being winched up to its full height, using a primitive system of knotted ropes and elbow grease, by hearty volunteers ensconced at the top of the said church tower. Once secured in place, the lofty pine is topped with a wicker basket that once used to hold a live cockerel (the traditional symbol of Pollença) which these days is PC endorsed and just filled with chicken feathers.

Now, this is the best part... an enthusiastic gathering of the fierce and fearless, yet not necessarily the fittest or even the smartest, attempt to scale the said pine, risking life and limb to reach the top and release the feathers!!!

Due to the earlier handicap of lathering the said pine with soap, the ascent is hilarious if not perilous, as contenders clamber over each other like swarming ants, attempting pyramid formations, and generally throwing all safety precautions to the wind in their quest to climb. After an hour or so of daunting entertainment, someone actually DOES miraculously claim victory, and is hailed a local hero whilst clinging desperately to the bending summit of the wavering pine.

True to life, fortune favours the brave. It’s a totally madcap event and one of Mallorca’s many, many unique traditions - a great run up to the fiery Sant Antoni celebrations which are coming your way soon. If you miss ‘the climb’ in Pollensa, just keep your ears open, as there is probably another ascent coming to a square near you! But whatever happens, don’t be tempted to don your leotard and climbing shoes, just sit back and let the intrepid locals take your entertainment to new and dizzying heights. Just be grateful for those two feet on firmer ground!