Balearics being outpriced by Turkey and Bulgaria

Mallorca in danger of pricing itself out of the market

In the UK and across most of Northern Europe, it is going to be a very tough winter with everyone watching their domestic budgets to meet rising energy bills which may mean that holidays in 2023 will not be high on the list of priorities, not to mention last minute holidays to the likes of Mallorca this winter. 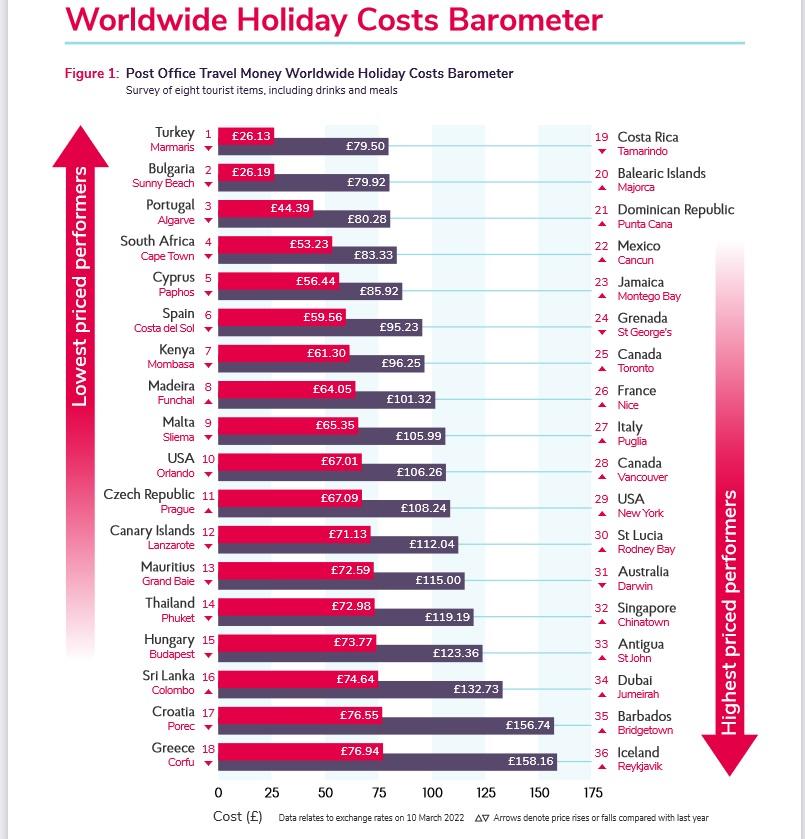 Price is going to king more than ever and the Balearics needs to watch its pricing as competing destinations are giving the islands are run for their money, according to the latest reprt from the Post Office.

Turkey and Bulgaria emerge as best value in this year’s survey of prices for meals, drinks and other tourist essentials in 36 destinations worldwide. The collapse of the Turkish lira helped Marmaris edge past Sunny Beach, Bulgaria to take the top spot for the first time.

Prices are down in both destinations but a fall of almost 37 per cent year-on-year in Marmaris, compared with five per cent in Sunny Beach, means that Turkey has become marginally cheaper for British visitors – although just pence separate the two. They are among nine of the 10 best value destinations where prices are down on 2021 levels.

Europe continues to dominate the top 10. In third place after a price fall of one per cent, Portugal’s Algarve is again cheapest in the Eurozone – with costs 25 per cent lower than the Costa del Sol (6th). A 15.2 per cent drop in costs for Cyprus, means Paphos has moved up from 11th to fifth in the table, overtaking the Spanish favourite, where prices are down by just 2.2 per cent. Sliema, Malta (9th) has also entered the top 10 after recording a 5.8 per cent fall.

In fourth place, Cape Town, South Africa remains best value for long haul holidaymakers, with prices down 1.6 per cent. It is joined in the top 10 by Kenya, where a 5.9 per cent drop in barometer costs has helped Mombasa jump five places to seventh in the table.

Spain to cut VAT on gas to 5% from October, PM Sanchez says

Orlando, Florida (10th) is making its first appearance in the leading 10 after registering a 10.1 per cent year-on-year price fall, rising to over 22 per cent in two years.

Madeira completes the top 10 in eighth position, but prices have risen over three per cent.
At the other end of the spectrum, Reykjavik, Iceland remains the most expensive destination surveyed, followed by Barbados and Dubai. All three registered price increases of over 20 per cent, with Dubai seeing costs spiral by a third.

Sterling’s strength against many currencies has proved decisive in helping to keep costs down. Once the sterling exchange rate is applied to local currency prices, British visitors will pay less in half of the destinations surveyed.

Aside from Turkey and Cyprus, prices have fallen significantly year-on-year in Greece (Corfu down 15.4 per cent). They are also down 11.8 per cent in Phuket, Thailand and 6.5 per cent in Darwin, Australia, destinations just open to international visitors after two years of closure. Big price falls in both resorts have combined with a buoyant pound to reduce prices for Britons.

By contrast, there have been significant rises in some destinations – particularly those whose currencies have risen against the pound. Prices in Sri Lanka have increased by 26 per cent, while visitors to Mexico can expect to pay around 22 per cent more in Cancun than a year ago.
The level of price falls over two years is even more marked.

Compared with March 2020 when the first lockdown was announced and travel to most countries was barred, Post Office research found that prices are lower now in two-thirds of destinations – with the biggest drop of over 50 per cent in Costa Rica.

Nick Boden, Head of Post Office Travel Money said: “It will pay dividends to invest time in holiday homework because many people won’t have travelled abroad in the past two years. They need to be aware that prices have risen sharply in some destinations and fallen significantly in others. We advise making a destination shortlist and comparing costs before booking a trip”.

And "Sterling's strength"? (as if nobody noticed). But it's reassuring to know that Britain is still the best. https://www.thelondoneconomic.com/business-economics/britain-now-the-sixth-largest-economy-as-pound-dollar-parity-approaches-334128/

Well that's good. Maybe Magaluf will get some better tourists next year.