Blue Fish Day was good one

Sardines are at their best now. | ARCHIVO

As I wrote on a recent food page, this is a wonderful time of the year for blue fish. Sardines are now at their best and will be until the end of summer. This is also when we should be eating boquerones (anchovies) as they will be in season, and at their finest, until the end of next month. Sardines and boquerones are not good travellers because both are a bit fragile and quickly lose their freshness, so it’s always best to eat them when you are on the Mediterranean coast or near it.

In Majorca we have the Med right in front of us, so all fish lovers should be snapping up sardines and boquerones at the market (the prices are always right) or ordering them in restaurants where they are done on a hotplate or chargrilled.

Either way they will be delish if they are not overcooked. But if they are on the hotplate or the charcoal grid for too long then they will be overdone and dry – and that’s the worst thing that can happen to sardines and boquerones.

But there was no chance of overcooking at La Cueva. The cook is a woman who obviously is well used to doing sardines and boquerones, and she did them in the best possible style and with spot-on cooking times.

Some people insist on eating boquerones with a fork (and sometimes a knife as well) but I always use my fingers and so do most Spaniards I know. If ever something was made for being picked up between thumb and forefinger and bitten (or popped into the mouth if it’s a small one) it is deep-fried boquerones.

I was pleased to see the boquerones came with only a wedge of lemon decorating the plate and adding a splash of colour. So many other cooks provide unnecessary garlic mayonnaise with lime, ginger or wasabi to add extra flavour. These nicely fried fresh boquerones, with slightly crisp exteriors and soft insides, didn’t need all this nonsense. We didn’t even use the lemon wedge.

Although La Cueva is in a high-profile tourist area, it has always aimed its dishes at the locals. The sardines made this most evident. As I mentioned in the recent article on blue fish, the experts don’t clean or even gut the sardines: ours were grilled complete with skin and scales and also the innards. They were also delish.

They were too juicy and soft to be picked up and a knife and fork are necessary. To get at the flesh you must use the knife to pull off the salty scaly skin. The flesh was perfect and I gave these straight-from-the-sea sardines a 10.

The La Cueva slightly below street level has been there for decades but I never went because I always thought it was too much aimed at the tourist trade.

But their way of doing the sardines is absolutely authentic and I would have thought the average tourist wouldn’t want them like that. It’s always good to see that some places continue to do dishes the proper way. Be sure to remove the scaly salty skin to get at the succulent flesh which was worth a 10.

The boquerones were also a delight and highly recommendable. The calamares romana were edible but the batter was too oily.

La Cueva, Calle Apuntadores 10, Palma. Tel: 971-718440. Closed on Mondays. At the moment there are two places called La Cueva right opposite each other. One is slightly below ground level (thus the name of The Cave) and the other is on a corner with a dining room that’s slightly above ground level. That’s the one I went to. Both are run by the same family. 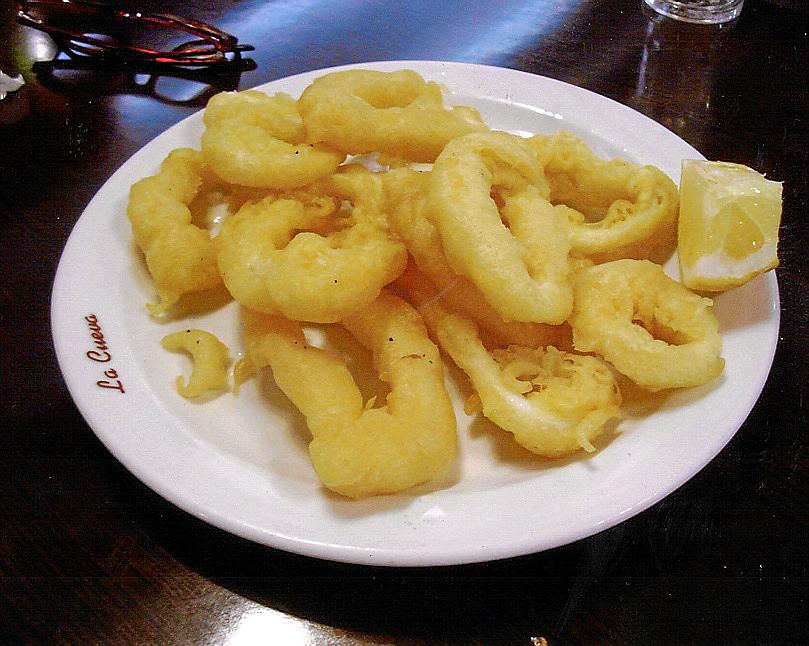 Regular readers must have noticed that I never tire of ordering croquettes and calamares a la romana, sometimes called calamares andaluza, although these terms aren’t synonyms.

It’s not that I especially like these two dishes (although I do, and very much) it’s mainly because they are a reviewer’s godsend: no two cooks ever do them exactly alike so there is always something to write about.

That doesn’t happen with sushi: it never changes and once I have written about it a few times I am totally bored. As I don’t want to write about it anymore, I’ve stopped ordering it.

It’s the exact opposite with calamares a la romana: there’s always something different going on, something I can put to words that aren’t the same as those I used last time I wrote about them.

These calamares a la romana had two main errors: the batter was oily and it had a taste of uncooked flour. This suggests the frying oil wasn’t at the right high temperature. When the oil isn’t hot enough the batter isn’t seared instantly and oil seeps in.

At the same time the oil isn’t cooking the batter fast enough and the rings of calamar are taken from the deep-fryer before the flour’s carbohydrate has been properly cooked.

If that analysis is correct, then these imperfections should be one-offs: they won’t get repeated when the oil is hot enough. That will be a good reason for ordering them next time I eat here. As I said, with calamares a la romana there’s always something to write about.