There’s nothing like a bit of social media scrolling to make you feel inadequate during lockdown, so when I spotted that a lady called Tracey was “alternating between PE with Joe, Figure 8 Fitness, yoga online, and joining my tennis-playing son in his fitness routine”, I really did have to question my dedication to the exercise cause. So, with Tracey as my motivation, I decided to run 5k.

There were many flaws to this plan, not least the fact that I would have to complete the run in the back garden and, while I am deeply grateful to have a garden, it is only of average size. Two bajillion laps and an entire Fearne Cotton Happy Place podcast later (Russell Brand: in isolation, since you asked), the 5k was complete. I vowed never to do it again. Instead I would return to that lion’s den, social media, and see what the internet had to offer. This was my timetable on Monday: 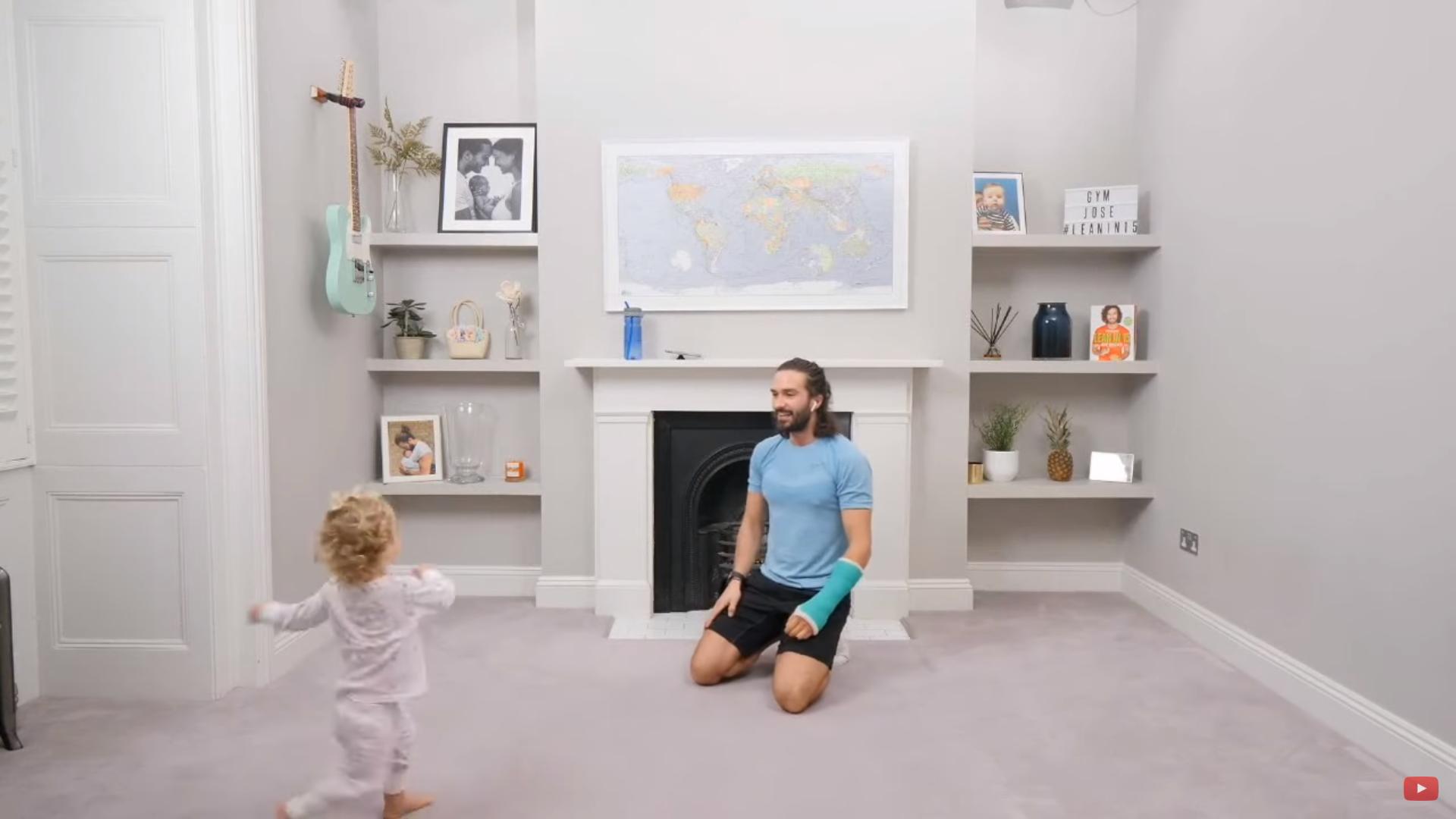 The PE With Joe class is my comfort zone. I’ve done every single session since he started on 23 March and therefore deserve some kind of community action award. We’ve all pretty much worked out that most of Joe’s viewing audience is made up of adults who went to seed a number of years ago, and only take part because it gives them something to do that isn’t home-schooling their offspring or watching Loose Women. The moves aren’t too strenuous, there’s a two-minute half-time break, and it’s the only time in your adult life that you can legitimately get away with pretending to be an web-spinning Spiderman or a joey-carrying kangaroo. Joe himself isn’t excessively fat-shamingly buff and has the good manners to pretend he’s as out of breath as we are. Joe grew up on a council estate with a heroin-addict father and got where he is today through sheer bloody hard work and self-belief. If that doesn’t make you admire him, the fact that he’s donated every pound of his six-figure #PEWithJoe YouTube advertising revenue to the NHS certainly should. And, for added interest, his cute one-year-old daughter Indie is prone to gatecrashing the classes. 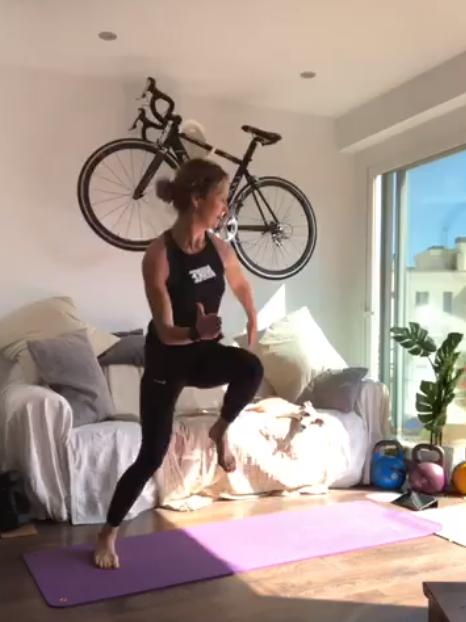 Katie is probably Majorca’s longest established personal trainer. She’s been here 15 years, and from ironmen to triathlons, swim racing to jungle trekking, you name it, she’s done it with style. I feared I would find her class too tough but, by intelligently alternating cardio with strength, things didn’t get dangerously tachycardic. Sticking to a strict 20 minute routine was also much appreciated, as we’re all busy people (oh wait, hang on…). Like Joe with his Indie, Katie also has a cute accessory - whippet Lilly. The dog lounged at the sunny end of the sofa wearing a ‘not one fudge given’ expression. Although, with a bicycle hanging precariously off the wall directly above her head, Lilly should have been paying greater attention. 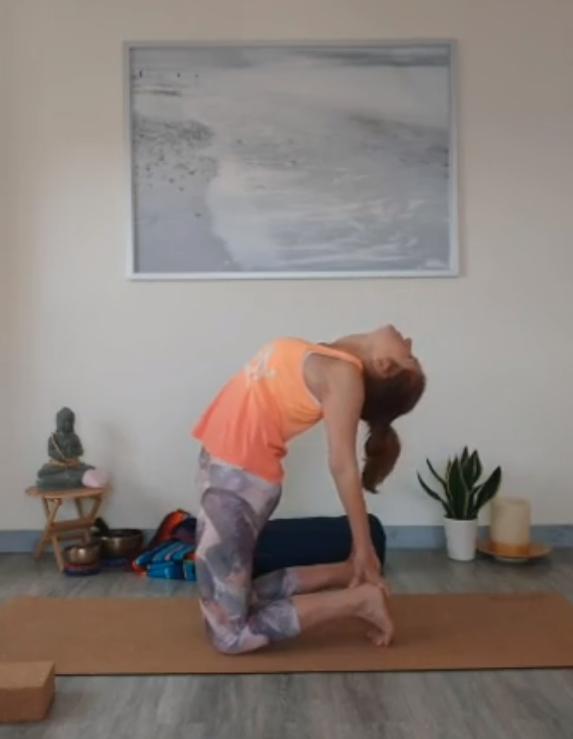 Now this session was ‘live’ at 9am, so I probably missed the ‘rise and thrive’ purpose, but I needed something lighter to contrast with my previous two high-intensity workouts. There is a saying that goes along the lines of ‘that which you most avoid is often that which most needs to be done’, and I would say it applies perfectly to me and yoga. My mind craves the space, the quiet, the inner awareness, but I just can’t seem to get yoga to work for me. While the instructor was clearly exceptionally knowledgeable, talented and kind, my focus kept wandering to how I should really clear out the cutlery drawer, and if I had any coconut milk to make a curry for dinner. If only it’d been 15 minutes rather than 50, she might have tamed my itinerant mind. 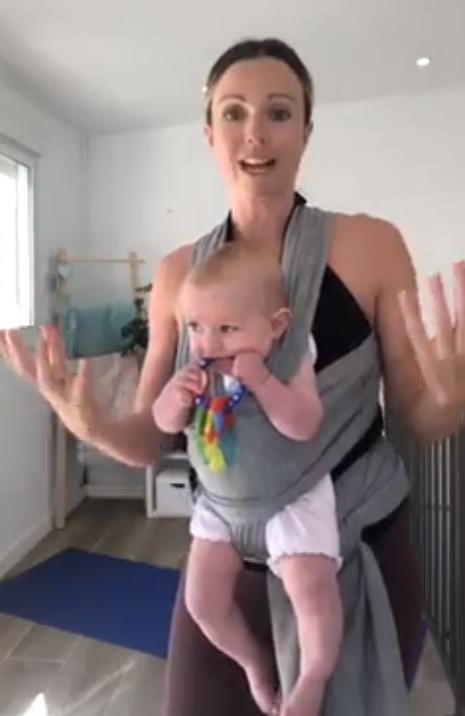 By now, I totally realised the importance of an accessory. Like Indie and Lily before her, five-month-old baby Indy Rose was Carys’ adorable USP. Strapped to Mummy’s tummy in a papoose, she didn’t utter a peep as we squatted, lunged and lifted our way through an exceedingly pleasant 25 minutes. Carys kept reassuring us that ‘having a baby attached to you was not necessary to take part’, but I did feel a little less cool without one, and dog Edwin would be about as happy to be in a papoose as he is when I put his pumpkin outfit on each Hallowe’en. The only slight catch with Cary’s class is that you have to be a girl to be in her happy gang - although perhaps she would make an exception? 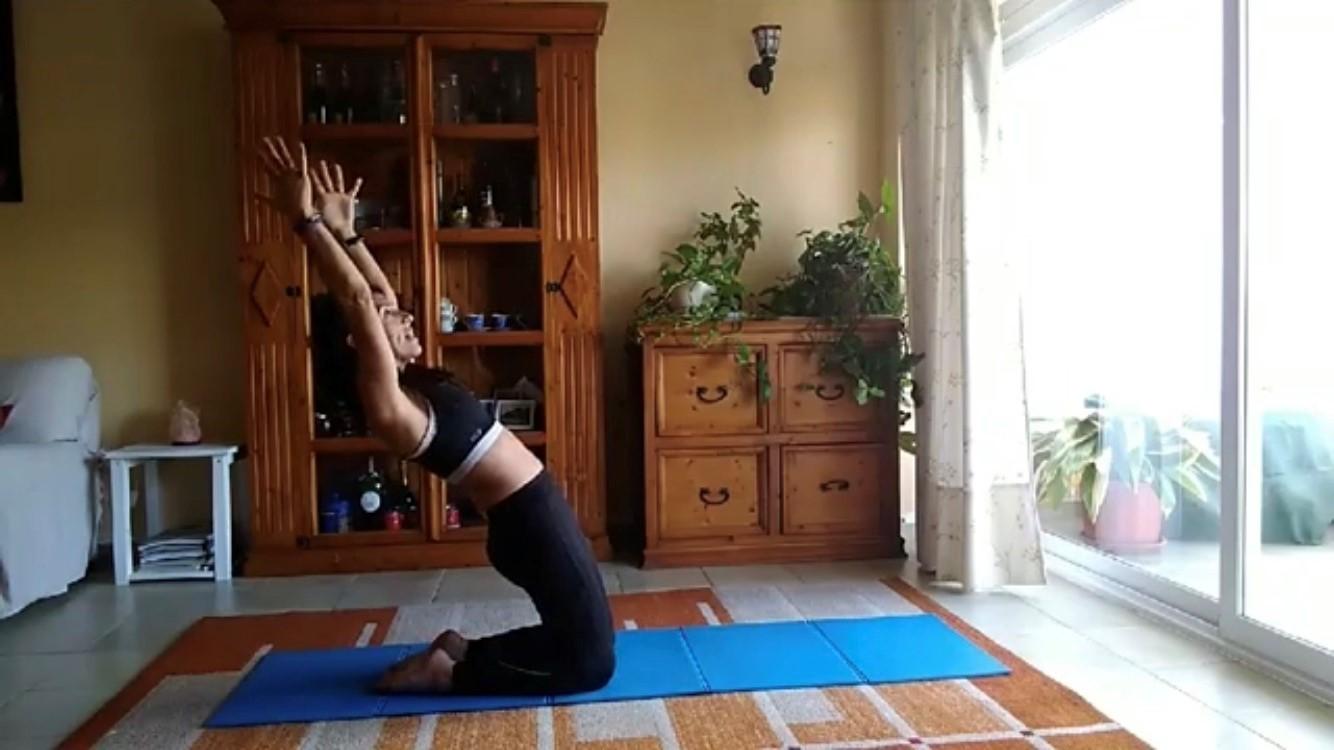 Anabella Ruggeri has the body I want. About a decade ago, I did SUP Pilates with her off Portals Nous beach and was fascinated by her fat-free abtastic physique and the way she said ‘bertebra by bertebra’ in a thick Latin accent. Ten years later, Anabella still says vertebra in the same adorable fashion and she genuinely hasn’t aged a day - Pilates must be the secret to eternal youth. More structured and less spiritual than yoga, Pilates is, on paper, my bag. Anabella is a fantastic teacher with a gentle character but, again, my wandering mind found the hour a touch too long. It’s not her, it’s me. Oh, and don’t trust her when she says ‘just one more’, ‘one’ invariably means ‘three’…

I’m not going to lie, this chap did not get the best out of me. The last class of the day, my concentration was lapsing and my coordination was pants. I caught a glimpse of myself in the mirror, as I was trying to stitch together a rapid-fire sequence of high hooks, rear uppercuts and straight punches, and cringed. All I could see was a mess of uncoordinated flailing limbs and I started thinking about wine. I feel this class is better for someone who has some previous boxing experience and at least a modicum of coordination. The coach was top notch, the student was the issue. 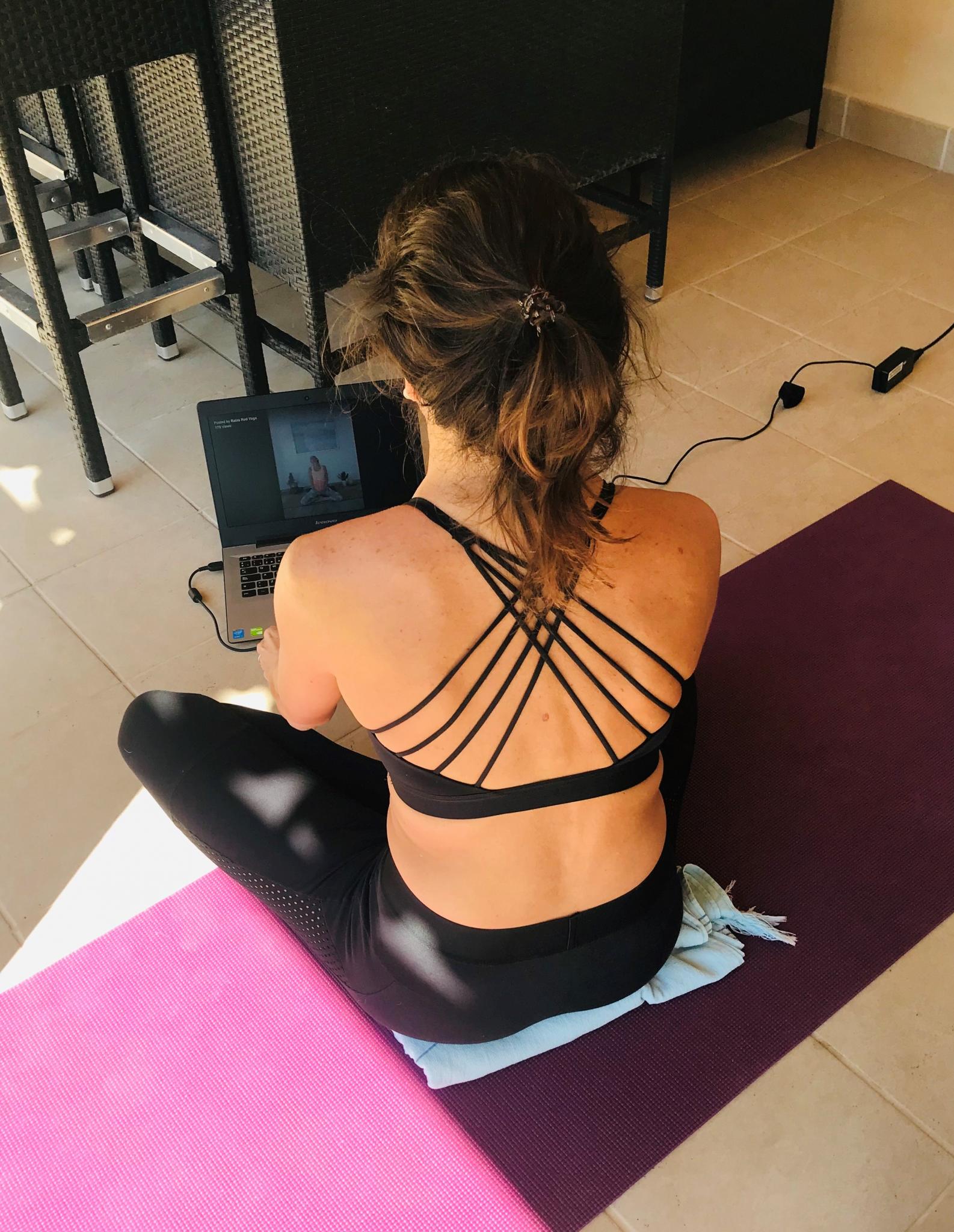 Trying to focus on the yoga. Photo: Howard Forge.

So, what have I learned? Some exercise certainly lifts your lockdown mood, but too much of it saps your energy and sends it crashing back down. 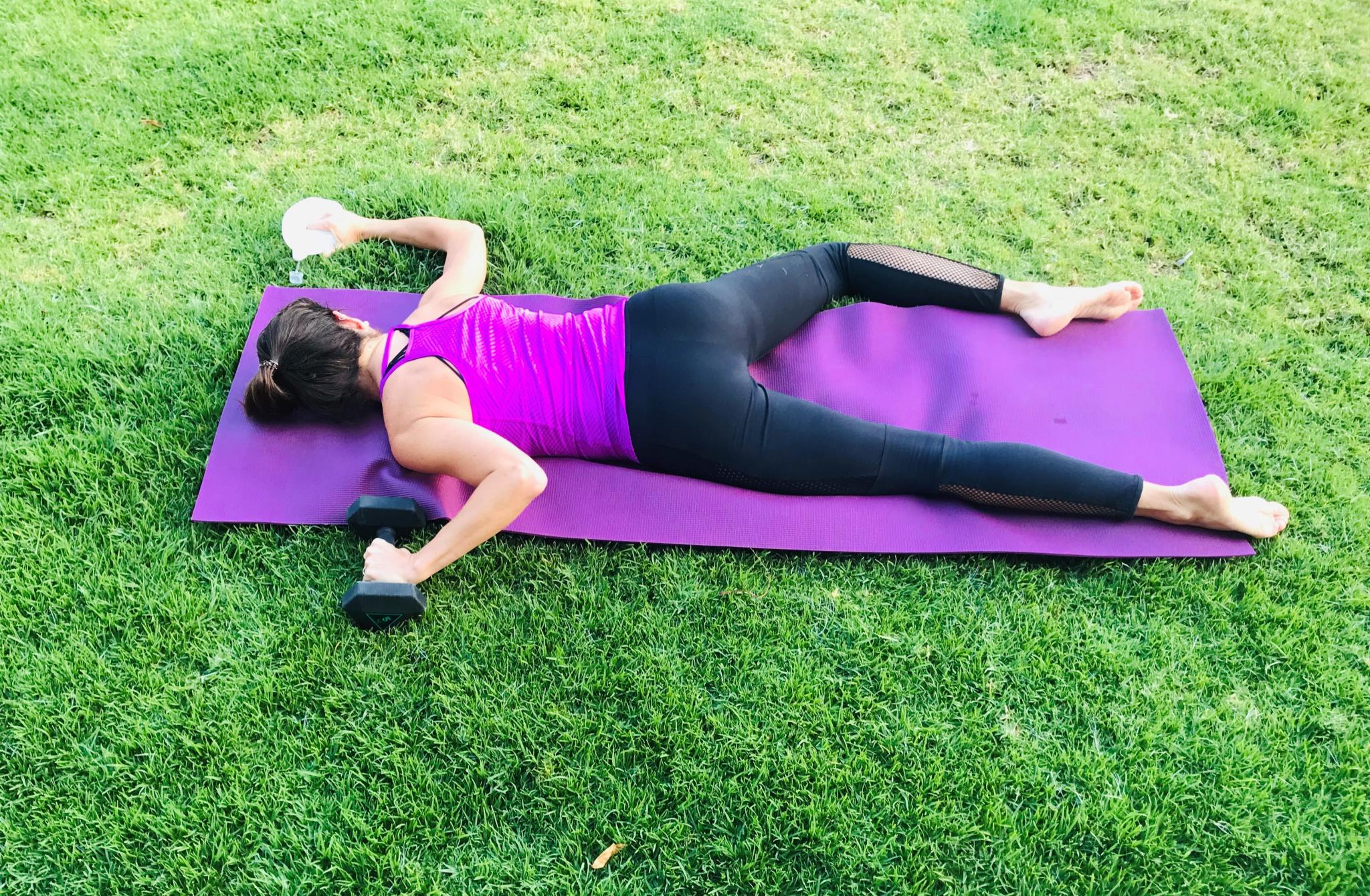 Be like Tracey. Find what you like, alternate throughout the week, and, whatever you do, don’t try and run 5k round your garden.

What's on in Mallorca on Sunday until Thursday